Everybody Do The Dinosaur. 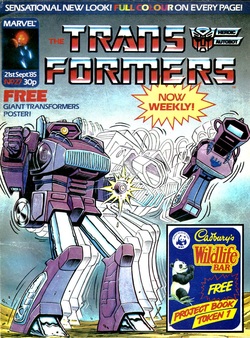 
I believe I have - to use another expression from my Earth fact file - struck gold!


This has been something of a rough week for me, with rougher to come. But two things have helped to keep at least the vaguest hint of a smile on my face. The first is learning that John "Sargent Benton Offa Doctor Who" has recorded an album. I've not even dared listen to the free samples on Amazon as there is no way they could live up to what's in my head.

The second, luckily for this blog, was delving into the Savage Land and journeying with Ratchet as he digs up the Dinobots. The winning streak of the last few weeks continues here with some of Uncle Bob's very best work.

Which is also lucky for the comic itself as this is a BIG issue. We've talked before about the change from fortnightly to weekly, but what I haven't mentioned yet is this means the kids spending their pocket money now have to lay out twice as much in a month to get their fix. Indeed, slightly more as the price goes up three whole pence to 30p (most likely to cover the costs of FULL COLOUR). If this wasn't a really good, really strong issue that added expense could have driven readers away.

The new format doesn't get off to the best start as the dangers of presenting 11 pages of Nel Yomtov are obvious on the opening page, as Ratchet as a large yellow smear across his groin. Why is a question that may keep you awake at night, but it looks as if when block colouring the MARB- Ratchet's very awesome personal hover-medibay loosely based on what half his toy turns into- the same lovely urine shade Nel slipped and couldn't be bothered to correct it.

It's almost enough to make you miss the fact Ratchet has followed the Dinobots' shuttle to our second, and last as far as our American friends are concerned, major Marvel crossover, The Savage Land. Though the caption placing when this story occurs in relation to The Avengers has been altered by the UK team to be more generic. Fun Fact: IDW also had to edit this panel the first time they reprinted it, and this is one of two parts of this story both they and Marvel UK removed for different reasons. But more on that next week.

Ratchet's journey through the swamp does have a fair bit of padding in it, including a lengthy "Story So Far" recap (more understandable in the original US version where it had been a month rather than a week since the last issue) and a fight with a snake, though the later is at least funny and Ratchet remains well written. 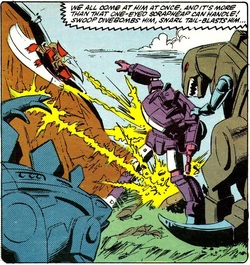 Shockwave Vs. The Dinobots.
More fun is to be had back at the Ark, with Shockwave overseeing the moving of Prime's head and complimenting Megatron on having done such a good job being a lackey he's had to revise the odds of having to execute the former leader upwards. Whilst Megatron is putting on a perfect toady performance whilst his thoughts continue to be whinny and full of anger. It's a sequence that's pure comedy gold.

But back in the Antarctic we reach the real meat of the issue: The Dinobots. What's surprising coming to it as a modern reader is it's not Grimlock who's the focus point for their introduction, but Slag. In years to come Grimlock will become a much overused character, but Bob won't actually show very much interest in him until his writing starts to go a bit peculiar two years from now. Indeed, before King of the Hill! The Dinobots as a whole will show up so sporadically in the US series with such long gaps between each appearance Simon Furman will basically get to make them his own.

The focus on Slag therefore becomes instantly pretty neat in hindsight as this issue probably has more lines for him than the rest of his appearances combined. And the conceit of us seeing the much pimped battle between the Dinobots and Shockwave through his “Eyes” as Ratchet downloads his memories means we get to have a different sort of fight scene in more ways than one.

Slag-tastic.
The other way its different is Shockwave wins over the Dinobots. It's only a last minute fluke that puts them all in a tar pit. It's worth remembering that Shockwave is an established character now with (in the original American run) three issues behind him. The Dinobots however are brand spanking new. Normally, according to the New Toy Bitch Slap rule the comic will later establish they should walk this fight easily.

The fact they don't after the build up (which started months ago) is both surprising and a great way of keeping Shockwave's threat alive. It also adds some tension in the present as Ratchet now can't give Megatron what he demanded to hand the Ark back.

It would be an even better fight if deal old Nel hadn't coloured Shockwave as Megatron.

We get another decent faux cliffhanger (I'm starting to think that good storytelling naturally sees the original issue reach a mini-peak around the middle) as Slag awakens. And it's here Ratchet manages to sneakily steal the issue from his new co-stars as he gets some comedy slapstick of being knocked on his arse and having to hurriedly uncover his Autobrand before Slag... well slags him. A quick explanation later though and Slag's ready to finish the job he started four million years ago.

The relaunch isn't relying on just a good story though. There's the first in a series of posters (which my copy doesn't have, but I believe it's the first that isn't a screen-grab from one of the early commercials) and- perhaps given an undue amount of space on the cover- the first of three tokens for a WWF book.

I actually have very strong memories of this Robin Smith cover, but not from the comic itself. My Mother used to collect Starburst magazine and being a strange sort of child I used to greatly enjoy reading past issues, mainly for the dear departed John Brosnan's It's Only A Movie column. One such issue had a half page advert for the new weekly Transformers which, as a later day reader, was a great source of fascination for me. The cover doesn't give very much away meaning I used to try and work out what sort of Shockwave related shenanigans might be going on inside. I guessed- very wrongly- it was the follow up to his shock first appearance.

The fact it got an advert in a magazine that never carried another and probably didn't have a huge crossover in readership shows how keen Marvel were to pimp the relaunch as well. 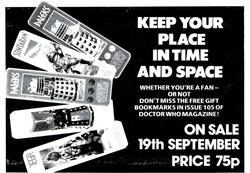 Some of the ads are still black and white.
Inside the covers the comic takes on its “Classic” format. Though there's no letters page this week the layout is otherwise exactly what it will be- the odd logo design change aside- for all bar the three story issues.

Transformation, a Lew Stringer strip (though Robo-Capers is especially poor this week), 11 pages of Transformers and just the one back up strip.

And what launches this issue is the first really good back-up, Machine Man: He Lives Again!. The titular hero doesn't actually appear this week, as instead we're introduced to the far flung future world of 2020 where some scavengers steal his deactivated body by accident from a warehouse. It's all very Blade Runner, but nicely done with some good banter between our new supporting cast as they run off from the evil Baintronics storehouse.

Oh, and Matt and the Cat still, but nothing's perfect.

The other important thing to note, and which the Transformation page plays up big time, is the comic is now one year old. Which means I've been doing this for six months now. I hope you've enjoyed the journey thus far, doing this through the good and currently bad times has been more fun and surprising than I ever expected it to be when I set out. As sad as it may sound, having this one constant in my week has been very reassuring as well.

Next week, the first phase of the Prime's Head Arc closes as Megatron fights the Dinobots and really does suffer from the New Toy Bitch Slap effect Shockwave escaped here. 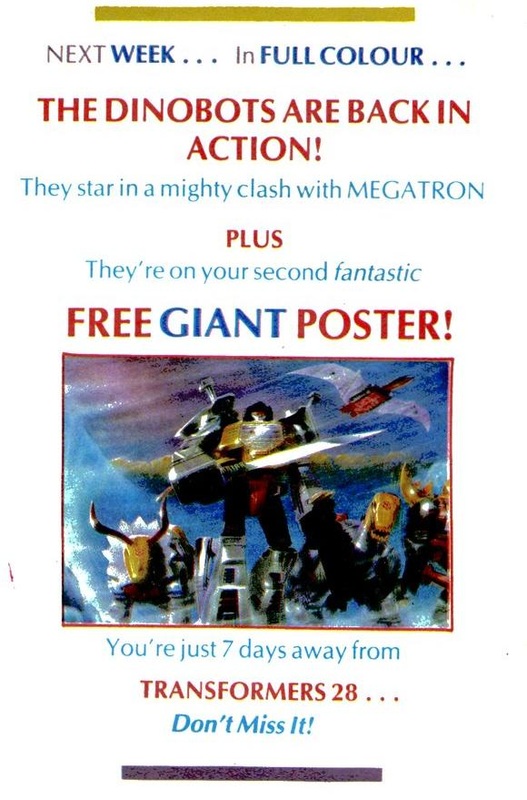