What I Go To School For. 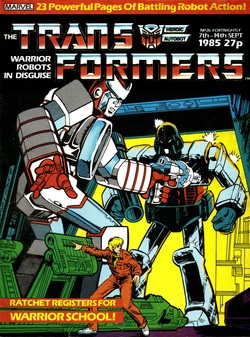 
Let us give these fleshlings a lesson in Decepticon labour relations!


Issue 26 is a big beast of a story. 23 full pages of Transformers action. Compared to the measly 5 we were getting just two stories ago it's almost enough to overwhelm you. We get a hell of a lot of firsts and milestone moments here, so strap in for a lengthy ride through the first of many bad days in the life of Chief Surgeon Ratchet.

And in terms of story content, that's the important thing, the first real large scale focus on one of the book's most important characters. Ratchet is one of the few Transformers both Furman and Budiansky will write constantly well. In Furman's case it's a relationship that will endure well beyond Marvel and will see Ratchet join Soundwave as one of the few he's really managed to nail perfectly across every G1 variation he's ever worked on.

The important thing to remember about Marvel Ratchet, is life hates him. Virtually every story in which he has a major role sees him made the Universe's bitch. They'll be a lengthy period during the middle of the run where we won't see much of him where it's easy to assume this run of bad luck continues with things like his new puppy getting run over.

Even though the choice of him as The Last Autobot was likely a coincidence rather than pre-planning as he was the only logical choice to leave the Ark with Sparkplug, there's a degree of irony here. His profile makes it clear he likes to have a good time and enjoys a party. Instead his life his pain. Indeed, the closest he will ever come to a party is with the opening scene of this issue as he and Buster come across some campers in the wood and try to join in their getting down.

We're going to have a lot of comedy human scenes in the years to come, but this is one of the best. Partly because it is genuinely funny, with a nice subversion of the stock "Teach me this Earth thing" cliché as he has to patiently explain to Buster he actually knows what fire is. There's also a nice gag over the stock exposition speech Ratchet gives explaining the entire history of the Transformers ("Any questions?" "I think you just answered all of them").

However, the big plus is it's not just a comedy scene for the sake of a comedy scene. It may provide some light relief before things get dark again but it also advances the plot in two ways. Firstly there's a need at this stage to separate Buster and Ratchet, so providing some fellow safe humans he can go home with gives a convenient way of getting rid of him.

Starting As They Mean To Go On.
Secondly, and most importantly, it sets up the themes of the next couple of stories, Ratchet's status as a reluctant warrior. The hanging out with the campers is a deliberate attempt to avoid the facts he doesn't want to face- that he's all alone against the Earth bound Decepticons. This brave face hiding his deeper fears already makes him one of the more interesting and rounded characters we've yet seen.

On a more minor note, the scene also serves to establish the "weapons" (for which read medical equipment) built into Ratchet's arms he'll later try to use against Megatron, here put to the far more sinister purpose of trying to cook a tinned hot dog.

With Ratchet in need of inspiration, there's only one Autobot he can turn to. With the Decepticons away on a mission we'll talk about shortly he easily sneaks onto the Ark, and again we see the faith he has in Optimus that sees him initially refuse to believe what Buster told him until he comes across the head himself.

Prime's behaviour here is actually somewhat odd. He does give Ratchet a motivational speech about how he needs to man (or mech) up to become a warrior and save them all. But equally, despite briefing the surgeon on Shockwave's plot for the Matrix, he never bothers to mention having given it to Buster. Or even to ask if the kid with the future of their species in his head managed to get out of the Ark alive. It's a baffling omission that would have only taken seconds to convey and again shows Prime isn't at his best.

This slight feeling of redundancy to Prime is, in retrospect made even worse by the next sequence. Forget Optimus, the true arch foe to Megatron in Marvel is Ratchet. The two will have more direct one on one confrontations over the years and wind up (literally) connected in a way Megatron never will be with Prime. It's a story that has played out to its conclusion the week I've written this in the fifth issue of ReGeneration One. This is the start of one of the most important hate/hate relationships in the book.

And it's a relationship that starts as it means to go on, with Ratchet in pain. Trying to sneak out of the Ark he winds up with Megatron coming up behind him and crushing his shoulder, with the look of pain on Ratchet's face (complete with "crying" eyes) being really nasty.

The sequence that follows is a joy, with Megatron continuing to be petulant as he beats the crap out of Ratchet just to vent his own frustrations with Shockwave and Ratchet desperately trying to fend him off with his medical tools whilst making cheap quips to cover how he's crapping himself (and only surviving as long as he does because Megatron is like a cat with a mouse trying to have fun).

It's a message from Shockwave (asking for Prime to be moved to their new base) which takes the wind out of Megatron's sails and allows Ratchet to talk. This means we get some more heavy exposition recapping Shockwave's arrival on Earth and as yet unexplained defeat by the Dinobots.

And this is where we get the real joy of the issue, despite Prime's advice Ratchet doesn't solve the problem by fighting, he instead does what he does best and out thinks Megatron. Bluffing that he knows what the Dinobots did he offers to defeat (in the original US issue "defend" but that mistake has been corrected here) Shockwave in exchange for the Ark and the Autobot bodies. So of course establishing they're already going to move Optimus is another neat bit of plotting.

Megatron makes Ratchet take part in our second Olde Transformers Ritual (following the trial by combat stuff in The Enemy Within) that in theory means he can't break his promise even if it's obvious the Decepticon will. Though the resolution to this will be one of the few times such ancient rituals are treated with any common sense.

As well as Ratchet's suffering, there's two other sub-plots in this issue. The first is our first decent scene for that other long serving character Soundwave. Using his tape deck mode to sneak into a Blackrock airplane factory he cheerfully uses Laserbeak to rip the security systems apart from the inside before taking it over. It's a lovely little action scene, and one of the few real stand out moments for Soundwave in the American stories. He even gets to be the right colour for once.

The final B&W panel.
This sees Blackrock get even more pissed off than he was already. To the point where he even starts looking like Tony Bennett (and losses his magic talisman moustache). His rather sad visit to the crippled Josie in hospital is probably the last decent moment Miss Beller will have for a very long time as well.

The other thread is just some minor set up for the Buster plot as he gets home and tries to get his Dad's garage up and running again whilst he's still in hospital. We learn the Matrix has had two amazing effects upon him.

First, it's made him a Jedi and given him the power to levitate mechanical things with his mind. Even though it's still officially a computer program at this point this is the first quasi-mystical property the Matrix has shown.

The second, and most important, is he suddenly realises what a complete and utter tit O is and tells him (and Jesse) to bugger off. So it's not all bad.

Despite my dig at Blackrock's changeable appearance, this is easily the most impressive US story to date in visual terms. William Johnson is generally regarded as the best non-Brit to have drawn the American book despite only having done two issues and it's easy to see why. With the character models having settled down and the style established he gets to be the first artist to have some fun, and takes full advantage of it. There's some great stuff here, from Ratchet's confused face when confronted with camping through Megatron's leer. 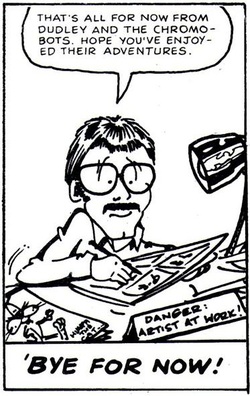 Thank Fuck For That.
This all adds up to a damn good issue. Generally in future "Event" issues- be they milestone numbers or mini-relaunches- will feature UK material front and centre (at least until the home-grown stuff is dropped). This changeover from fortnightly to weekly publication is pretty much the only time such a push will use the American stories and both Warrior School and what we'll be seeing next week couldn't have been a better choice for this transition.

Yes, just in time for its first birthday we're about to go weekly, with this blog finally syncing up with the publication schedule. And the "Next Week" box is clearly very excited about this, taking up a full page (as an aside, as a straightforward reprinting of the American issue there's no "Next" box at the end of the story this week). Full colour beckons as well, which is mildly annoying as they'll be less never reprinted images to chose from to illustrate this articles. Plus we'll have the full joys of Nel's "Colors" to enjoy.

With a full American story to include this last issue in the old format is somewhat of an oddity. The only full back up strip is the final Chromobots. Obviously rushed, despite the hasty wrap up (Dudley somehow deals with the evil Predator very easily) the final panel is wasted by Kazybird drawing himself into the story to say goodbye. It's the sort of egotism that saw so many Matt and the Cat references (oh, look what he has on his desk). The author also turns out to have based Dudley's dad as seen in earlier issues on himself as well.

Other than that, the only real thing to note is Robo-Capers gets to be in colour for the first time. It's still not Combat Colin good though, even if it is better than the aforementioned Matt and the Cat.

Next week, in real time, we get full colour and the present day début of the Dinobots. But the MARB is the big exciting thing. 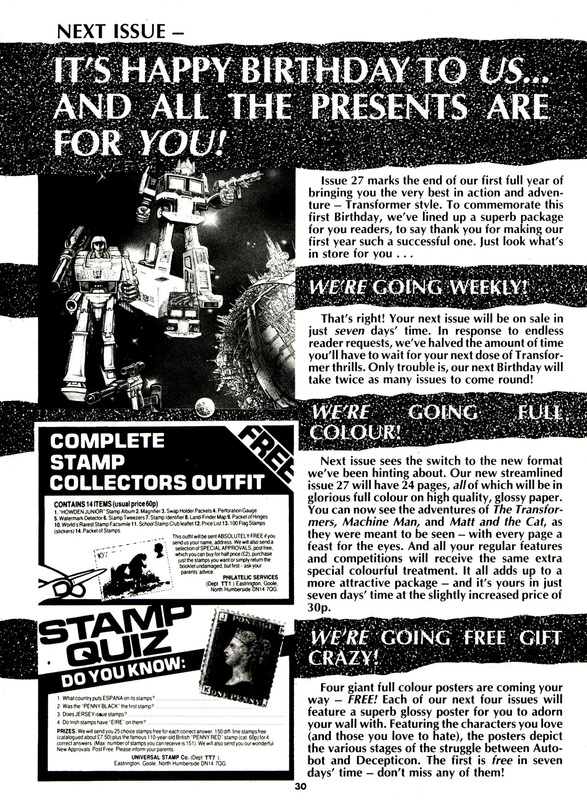