This Town Aint Big Enough For The Both Of Us. 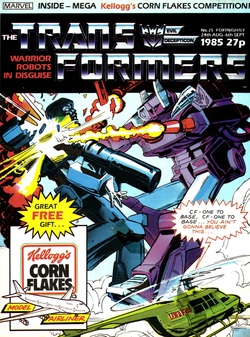 
Your demise will come at a time of my choosing... not yours.


As the Summer of 1985 draws to a close the build up to the big format change for the comic gathers pace and issue #25 is the last in the “Normal” fortnightly style of multiple stories. Effectively it ends a little mini era for the book, with the following final (well, for a long time) pre-weekly being more of a transitory piece.

In keeping with the approaching new look Shockwave officially becomes Decepticon leader. Technically he became in charge way back at the end of #8 and has been acting as such since the American stories resumed, but here we end with the other Decepticons formally pledging their loyalty to him after he logically proves he's the best man for the job because he can kick arse better than anybody else. The page where he stakes his claim has a lovely little bit of art (in an otherwise averagely drawn story, in the same panel Thundercracker is copying his character model pose complete with missing ear) where Frenzy nervously fingers his collar as well.

But in order to get to this point we have to have another first for the book, the début big bitch ass fight between two potential Decepticon leaders. These will become very common place, to the point where if you were to leave one Decepticon alone for long enough he'd probably start beating himself up to see who should be in charge.

But this is the first time, and it starts off very well even if the art isn't especially brilliant. A deeply pissed off Megatron breaks out of his chains and blasts Shockwave all the way out of the Volcano and into a high school football field miles away (American football of course, so no great loss).

And yes, after a surprisingly lengthy absence we get the return of “Wacky human bystander” comments as one of the team hopes Shockwave isn't going to play for DeForest (Kelley?) High that Saturday. More amusingly he has the number 69 jersey. Hu hu hu. 69.

Megatron's Command Style....
The bulk of the fight is great though, mainly because of the two contrasting characters. Shockwave is entirely reasonable and polite (if a little smug throughout), and makes a very good argument as to why Megatron is useless as he's ripping up massive a water tank to use as a mace. It's done well enough we'll see variations on what Shockwave does here in pretty much every big one on one fight he'll ever have right up to the present day.

Megatron on the other hand, is very different to how he tends to be written now. He's petulant and thuggish, a small minded brute who stupidly goes into battle before he's fully healed and thus gets completely owned. The noble intelligent tactician may be more credible, but this is absolutely hilarious. He starts off annoyed and gets more and more pissy as the issue goes on, even being angry that Shockwave won't kill him when he wins. And at the end he has to make the same pledge of loyalty as everyone else, with a look of complete and utter contempt on his face.

Meanwhile, Buster stumbles out of the Ark with little real memory of what happened within, except for Prime's headless state. This plot strand is nice and melancholy as neither character has much of a clue what to do next, and the issue ends with them completely hopeless outside the Ark.

Though it's only a minor plot in this issue, this is as good a place to mention as any that what we'll see Buster go through over the next few months was (loosely) adapted into Revenge of the Fallen, with Sam in his place. It's easy to see why the “Human ally gets the Matrix in his head” plot was looted as it gives a sensible reason for said human to keep themselves involved in the alien war after the initial contact. Buster (nor Sam) can't walk away as long as he's got this thing in his noggin both sides want desperately, and that's a very smart move on Budiansky's part.

...Vs Shockwave's.
So all in all the Are All Dead/Head storyline continues to impress. But obviously that's not enough for the British comic buying public. No, what the book really needs to succeed is a cheap plastic model airplane from a cornflakes packet.

We've not really talked about the free gifts before, mainly because till now they've tended to be nothing more exciting that a poster. To Americans it must seem a strange practice to slap any and all barely related crap on the front of a comic, but it is a long standing tradition in this country and one that has only gotten worse since these dim and distant days as, apparently, supermarkets won't stock comics unless there's a free bit of tat with them.

Sadly (luckily) my copy no longer has the plane, but the Kellogg's logo slapped across the front cover makes it one of the most obtrusive free gifts the comic will ever do even when the gift itself is taken off.

However, they do serve an important role in drawing in new readers (and in years to come trying to placate old ones when there's a price increase). A great many people seem to have been brought to the book by the single greatest gift it will ever do- the Panini sticker album- so these intrusions aren't as automatically bad as they might appear.

Soundwaves still hasn't quite found its grove yet. In order to make room for Robo Capers the introductory text and picture of Soundwave himself isn't on the page this issue, and without it any new readers would be hard pressed to tell the answers are supposed to be done “In character”.

There is one very interesting first though that comes much earlier than expected. Stuart Taylor from Bournemouth casually mentions he has every issue of both the British and American comics. This first acknowledgement of the US series may seem a small thing in itself, but suggests the informal rule of pretending that all the title's material comes from the same (implied British) source hasn't come into play yet. From now till around the time Furman moves over the Atlantic this will be pretty much the only hint there's more than one Transformers comic, and the book will at times actively misinform in order to keep the pretence up.

As the next issue will be all Transformers action, we see the departure of the two main back up stories. Planet Terry has a very hurried ending, with him almost tripping over his parents on the last page. The character's Wikipedia page suggests the original American book was cancelled without a conclusion, I wonder if this was something hastily thrown together for the British audience? Either way we'll probably never know as no one cares.

Machine Man also ends his present day adventures. Whilst I'm no expert I'm going to guess this marked the end of his first stab at a solo title as there's a feeling of a rushed conclusion to things, with the sub-plot about his berserker rages being resolved with it just being some loose wires. He also abandons his job and friends to go strike out on his own once more, in a fairly arbitrary way that leaves no real conclusion to the EVIL Senator plot nor the strange feelings in his electrodes one of his female colleagues creates in him.

After my initial mockery, I've actually come round to enjoying the adventures of Aaron Stack a lot, they're pure cheese but have developed into a fun series of deeply silly events. This is not the end of him though, in two issues we'll be joining him in the far flung future of 2020.

In order to cover his Marvel cameo appearances in other comics between his two solo series there's a text summary of everything we'll need to know to follow his new adventures. Interestingly this reveals one of those cameos had already been republished in the UK as part of the Big Ben comic (seemingly a title devoted to The Thing from The Fantastic Four that was launched solely to pre-empt the “Man with no time for crime”).

Chromobots sadly won't be ending till next week, and is now so deathly serious one joke about Marvel comics seems really out of place. And amazingly Matt and the Cat will endure like cockroaches after a nuclear war for another 50 odd issues.

We also get the first “Inter Face” the new, longer fact files that will serve to flesh out the characters a lot more than previous efforts. The entries here on Warpath and Ramjet makes it the first time Transformers who haven't yet appeared in the comic have been covered as well. As neither will be showing up for a while in the strip this was likely at Hasbro's request in order to give them some coverage as they first appear on shelves.

Machine Man Update logo.
A special side note also has to be made for the calender of Ratchet, which is not only lovely but based on some interior art we won't be seeing for another two issues.

But there's little time for lovely things next week as Ratchet has to learn to think like a soldier and make a deal with the devil in what is the final fortnightly issue (or the first weekly, depending on how you look at it) and the last with black and white pages. Well, until both return once sales start falling off. Things will never be the same again (for a good four years anyway). 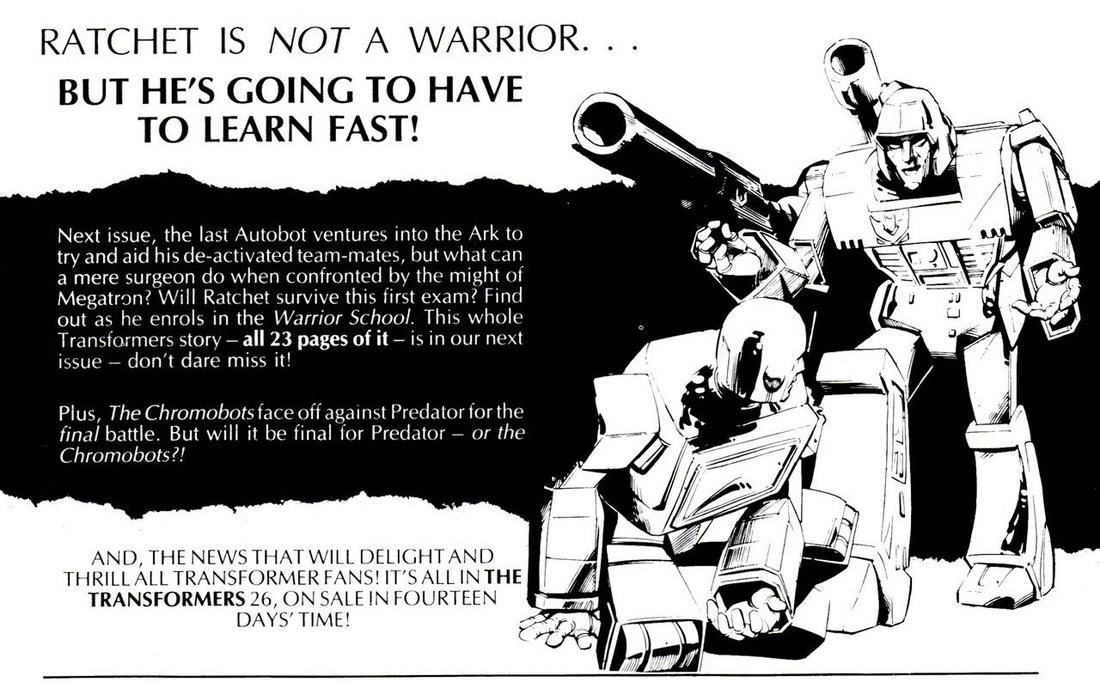