I Hate You So Much Right Now. 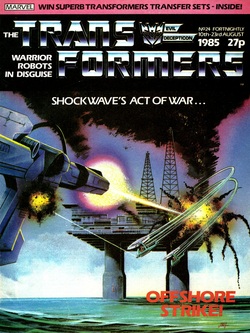 
“I Shockwave claim this facility for myself!”
“What the--?! You want one? Build one yourself!”


The reason, dear reader, that this weeks entry has gone up a day late is that I have been struck low by that most dreaded of things: Man Flu. For the past three days I've been flat on my back sweating and groaning like a third rate porn star without any of the good stuff. I even had to phone in sick to work. Yes, it was exactly the sort of trauma that would, if I were of a similar mind to Josie Beller, make me put on a metal bikini and go around angrily shouting at anyone who'll listen that I HATE FLU.

Lucky I'm not really. But there's no way around it, though we won't be seeing Circuit Breaker in costume for a while yet this issues sees the event that effectively creates the single silliest human supporting character in the entire run. In a series that gave us The Neo Knights and Bomber Bill.

That foreknowledge of what's to come shouldn't however distract from what is another strong issue. And a somewhat surprising one as the bulk of it is still given over to pimp out Shockwave's toy. As far as I can recall he is the only new toy based character will be introduced by themselves rather than as part of a larger group of anywhere between two and six characters who all need to be established and given a chance to show off within 22 pages.

Shockwave getting this solo space is a rare luxury, getting a second story in a row about how awesome and deadly he is before the next lot of introductions is pretty much something the US issues will never do again.

After the brief cameos of Josie, G.B. Blackrock and their oil rig two issues ago here we get to see them face off against Shockwave. You might think this probably isn't the most impressive way to show off the purple one-eyed monster, but by amazing coincidence it's the most heavily armed and defended oil rig in the entire history of humanity. G.B. must really hate Greenpeace protesters.

So a sequence that should take up a page at most is given the excuse to be drawn out for seven, but despite the rig's defences being somewhat blatant padding it's nicely done, with Blackrock especially be well defined. Yes, he's the poor man's Tony Stark but he's also one of the more realistic allies the Autobots will have over the years (and therefore understandably one of the longest serving). A man who with possessions useful to both sides in the war and with an immense sense of pride and desire to keep what's his ensuring he's going to do everything he can to stay ahead of the Decepticons.

G.B. and Josie.
But as for his equally long serving assistant cum psychopath... Josie is one of those characters who seems to be more popular with the writers than the audience. Both Budiansky and Furman will keep on writing for her in the face of complete indifference from everyone else, and both would even separately decide she might have a solo life outside of the comic (with Bob ensuring she was entirely Marvel copyright just in case and Furman getting as far as pitching a book staring her and her equally pants Neo Knights chums in the early '90's). More recently Furman has jumped through all sorts of hoops to include a bizarre copyright dodging “homage” in ReGeneration One. With “Circuit Smasher” managing to look even sillier.

What the appeal of the character would be is beyond me. Across six years she'll have exactly one really cool moment that wouldn't have had the same effect with another character in that role. The rest of the time she's either incredibly annoying or really stupid in her refusal to tell the difference between Autobot and Decepticon. Or, frequently, both.

Luckily, unlike her cameo in #22, she's no longer drawn to look like a 12 year old as that would have made her future costume choice unfortunate. She's actually fairly likeable here, the dedicated computer programmer fighting to the last to defend her boss and friend's interests. It's a shame that ends with her getting zapped. It's always a surprise when I re-read this issue that Shockwave doesn't shoot her directly, instead causing a chain reaction that ultimately reaches her down below. Future flashbacks will make it look a lot more personal.

With so much of the story given over to the fight other plot strands don't get much of a look in. Megatron does however, get a lovely page of getting increasingly pissed off with how all the other Decepticons are obeying Shockwave's every order. It's a lovely bit of petulance on his part that, in these days of making him a noble gladiator fallen from grace, is especially refreshing.

Over the page, his opposite number isn't doing much better. We get another surprisingly good artificial cliffhanger as the weak body-less Prime begs Buster to connect some wires from what's left of him and place them against his head. Even this early in the series seeing Prime this weak and... well pathetic is unexpectedly scary, and Buster's resolve to help his friend even against his father's wishes and without having everything fully explained to him, brings his character into sharp focus. And makes him the second human in the issue to get zapped by an immense shock.

Earlier this year I read the extremely large and chunky fan novel Eugenesis for the first time. Written by fellow Marvel UK lover and current king of all things IDW James Roberts, it's well worth a read for anyone reading the current comics (not bothered by editorial constraints he lays down his views on Primus in a fairly stark way that will be of interest to those who have read the recent Annual).

Whilst I mostly enjoyed it a lot- even if there's a lot of sub plots distracting from the main action (I'm still not sure what the Centurion stuff was all about)- there was one area of the book I didn't agree with. In it Roberts makes the case for the original, better Optimus Prime having died for good in [SPOILER] Ethan Zachary's laboratory. The Power Master (and presumably Action Master, though oddly the book doesn't mention the HiQ hybrid even though he's arguably a third version using that logic) is just an inferior copy, a knock off without the power or impact of the original.

I didn't particularly prescribe to that theory, not just out of loyalty to my dear old PM Prime toy, but also because I'd say all of Optimus' biggest achievements (including killing God and the Devil at the same time) happened after he came back. But reading this, small scared whimpering Prime who is dependant on tricking a small boy to save the day... Well it's hard to view him as the definitive article. 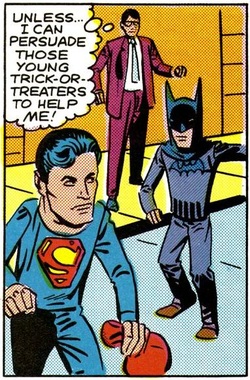 Probably a unique Marvel moment.
Though it's possible he just had better PR.

Elsewhere, Chromobots goes up to three pages. Not because of some sort of insane positive reader feedback, but because we're in the process of hastily wrapping it up before the format change. Thank God, there's only two instalments to go. We're also up to the penultimate Planet Terry, which remains a large load-stone around the comic.

Machine Man however gives an unexpected joy. Needing a fancy dress outfit to disguise his damaged face he comes across two small children dressed as... Superman and Batman. There's the bare minimum of design change to avoid copyright issues but it's still amazing and delightful to see two DC characters making an unannounced cameo in a Marvel one. And all for the sake of a “Man of Steel” gag.

The style of Soundwaves still hasn't settled down at this stage, with some of the letters being answered in the third person rather than by Soundwave directly. We do get an explanation for “Cassette Man” from a few issues prior though, a good example of what the page will do well as it comes into its own.

Next week, hopefully on time and in better health, the first of many, many, many fights to establish who gets to lead the Decepticons. The Autobots having a magic glowing ball decide for them actually looks sensible in comparison. 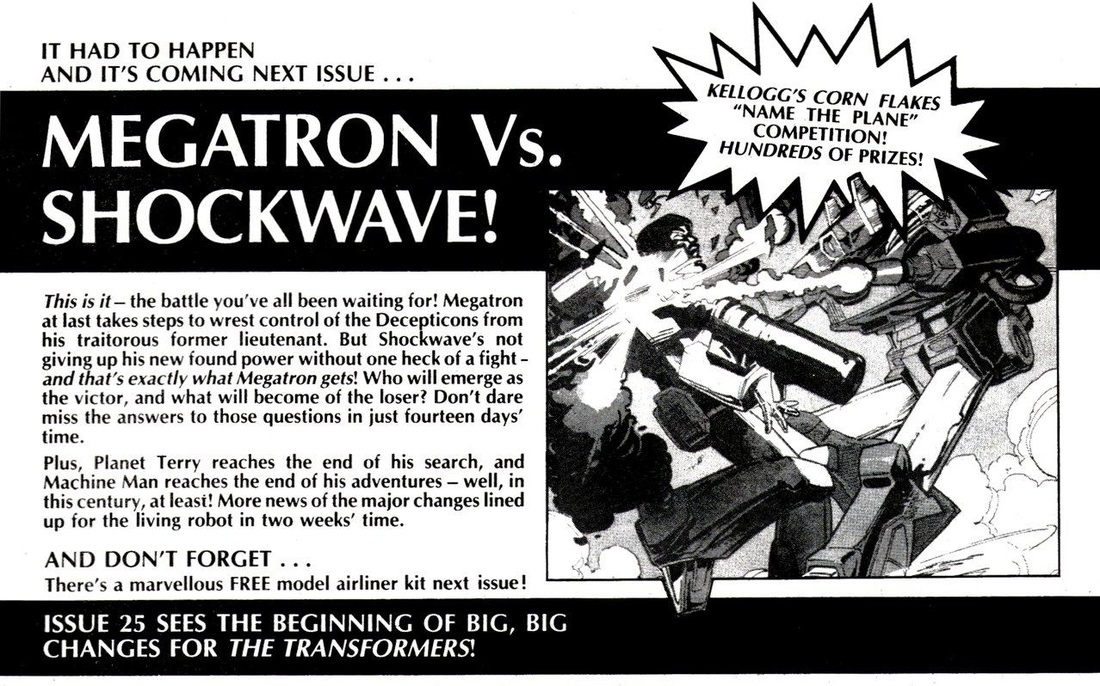