Why Can't We Be Ourselves Like We Were Yesterday? 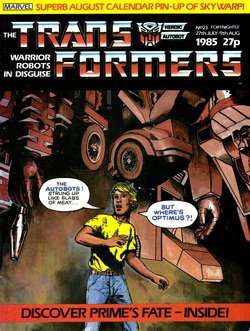 
Do you organic creatures mind? I don't go poking around your mouths to see how you talk do I?

Sometimes you can look at an image a 1000 times and never spot something really obvious in it. I've seen the cover to this issue; by an uncredited Robin Smith; many many times over the years on websites and guides. And I have always found its dark and sombre colouring to make the image of the dead Autobots much more affecting than the Nel Yomotov crayon collection we had in the last issue. Or indeed the block colouring we'll see later on in this one.

But it is only today, with the full size issue in front of me, that I've actually seen the great big honking Decepticon jet hanging upside down with the dead Autobots on the right hand side. How on Earth did I manage to miss that before? That looks very like Soundwave's leg next to him as well. It looks like Smith (who'll go onto have a long association with the book lasting into the more recent Titan movie comics) was just given pictures of a load of toys and just drew a random selection without knowing who was on which side. A piece of art I've always liked is suddenly a bit rubbish.

Luckily, with the set up exposition now out of the way, the contents see a decent upswing in quality from last issue. And the few bits that don't really work are actually helped by this story being split in two by the comic.

We actually start off with more catching up for forgetful readers as Ratchet returns to the hospital where he left Buster and Sparkplug after being “borrowed” by paramedics for a mercy dash. The dialogue between him and Buster is largely concerned with recapping past events.

However, unlike Shockwave's info dump in the first part, this is crouched in other stuff to make it less obvious. As Ratchet and Buster are talking we get a lovely little comedy scene of the human medics being deeply confused by the talking ambulance. The script is also at pains to quickly paint in Buster and Ratchet's characters for those readers who don't remember them as well. Indeed, in Ratchet's case this is the first real “character” moment he's had.

Buster and Sparkplug.
It's deftly done and is the most confident bit of writing on the American issues to date. The comedy is then followed up by a genuine bit of heart as Buster tells Sparkplug he's going to go back to the Ark with Ratchet (so people don't find an ambulance driving about by itself odd. This is obviously an excuse as a teenager doing the driving is hardly any less strange) and has to promise his worried dad that he'll just say goodbye and won't hang out with the giant killer robots anymore.

Sparkplug is a character who is going to have some very inconsistent writing in the years to come, but here the tone is just right with his concern feeling entirely right after Evil Bastard Jazz gave him a heart attack.

Back on the Ark things aren't entirely as impressive. Most of the next two pages is just devoted to re-establishing the situation between Shockwave and Megatron, which is odd as this was originally published in the same issue at the first part. The main new titbit is Shockwave refusing to reveal what happened to him that made him vanish for four million years, which Megatron grasps as the key to dealing with old one eye.

The third page is where things get interesting though. I mentioned last week how Megatron laid the foreshadowing for the introduction of the Creation Matrix, what I hadn't realised is the concept is introduced here properly, again in what was the same issue. That makes it seem like a slightly less impressive bit of track laying than I'd originally thought.

Shockwave's plan for the bulk of the Autobots- using them as spare parts- is fairly gruesome, but it's his plot for Optimus Prime that stands out. At this stage the Creation Matrix isn't the all powerful glowing McGuffin the '86 Movie will make it. It's a simple computer program that creates Transformer life (presumably in the sense it's the only program powerful enough to make complicated brain patterns, the idea of “Souls” or Transformers being made out of bits of God is a long way down the line).

This program is in Prime's head. It's worth noting that at this stage it doesn't automatically mean whoever has it is Autobot leader; else Megatron's surprise as Prime having it wouldn't make sense; meaning Optimus is awesome enough to both be the leader and general and main baby-robot maker for the entire species. This is one of several ways the issue bigs up Prime by proxy in order to make the ending more shocking.

Shockwave's plan is simple, but entirely logical, use the Matrix to make lots of new Decepticons and conquer the Earth. Control of the Matrix and using it for evil purposes is going to become a stock plot for both the main Marvel writers (though once the Space Bridge is established as a means of bringing new Decepticons Budiansky will pretty much forget it) and this storyline has echoes throughout the next three decades of Transformers fiction,. Right through Generation 2 via Revenge of the Fallen up to the current IDW stuff and beyond. This is the foundation stone (or load stone in terms of some of the poorer stories it will inspire) for a good chunk of what's come since. 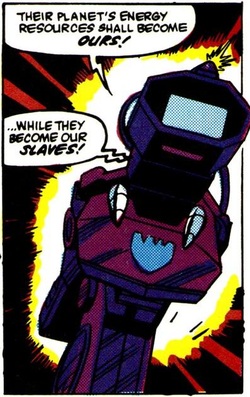 50 Shades of Shockwave.
Back with Ratchet we get another nice little comedy scene of him being nice to traffic lights. But this is the last light moment in the issue as things get very serious once they arrive at the Ark and find Decepticons in charge of it. As well as again emphasising the awe in which Prime is held, we learn Ratchet is a very reluctant, even scared warrior when out on his own with no back up. His growth into the role of a soldier is going to be a big part of the next few issues, and with the hindsight of knowing the many horrible things that will happen to him as the years go on it's hard not to feel sorry for the big lug.

Being smaller, Buster is able to sneak into the Ark past Rumble (not a problem in itself, but a few months down the line this will stand out as odd), which leads us into the weakest part of the issue. He finds the strung up bodies of the Autobots...in exactly the same poses as they were same issue. As in exactly the same. The art is reused and pasted over the panel of Buster. Whilst the grey block colouring means it isn't as garish and wrong as before, it's also far less impressive when shrunk down to one page.

And, again, this was originally in the same issue as the double spread it steals from. At least in the UK there was a fortnights gap to make it less obvious. Just to put the icing on the cake, the visual contradicts the earlier page showing Shockwave having the Autobot bodies moved so they could be stripped down.

Buster of course, knows Optimus Prime will be OK still and save the day. So he's shocked when he finds the Autobot leader as a disembodied head with all sorts of devices plugged into him, begging the human for help.

It's a fantastic image, and yet another great cliffhanger from the (proper) ending of an American issue. Even with Buster drawn doing some odd disco dancing there's not a reader who wouldn't be back in two weeks time.

As a whole, The New Order represents Uncle Bob's approach to writing Transformers at its best, there's a strong human focus, comedy and culture clashes but balanced out against a dark, dramatic plot of the sort we won't really see again (especially in the American stories) for a long time after this arc has finished. It feels a million miles away from even something as near in the future as Bomber Bill. 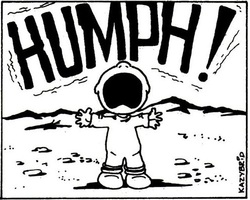 Matt and the Cat affects me the same.
One oddity about the issue itself, is that the story finishes on the back page of the comic, where an advert would normally be. I actually thought my copy was missing a page when I first saw it, so it'll be interesting to see if this is a one off (to ensure a dramatic full colour final page?) or something we'll ever see again.

With the big changes last issue the rest of the comic is much more settled. Transformation suggests anyone who could guess what's happened to Prime should go to the head of the class, whilst Planet Terry, Chromobots and Matt and the Cat all continue their mediocre meanderings. Chromobots is especially annoying in how it keeps mentioning Matt and the Cat as if this is a clever meta joke (and one thing I haven't mentioned thus far is Dudley is now wearing a Humph jumper. Sigh).

Machine Man continues his epic fight against the presumably Irish Jack O'Lantern, and actually manages to get his face melted for a second time. He's deeply confused as to why he keeps getting so angry when I'd have thought anyone would if villains kept disfiguring them.

Join me next week as things get slippery for Shockwave as he inadvertently creates what is arguably the silliest human character in all Transformers. Smashing stuff. 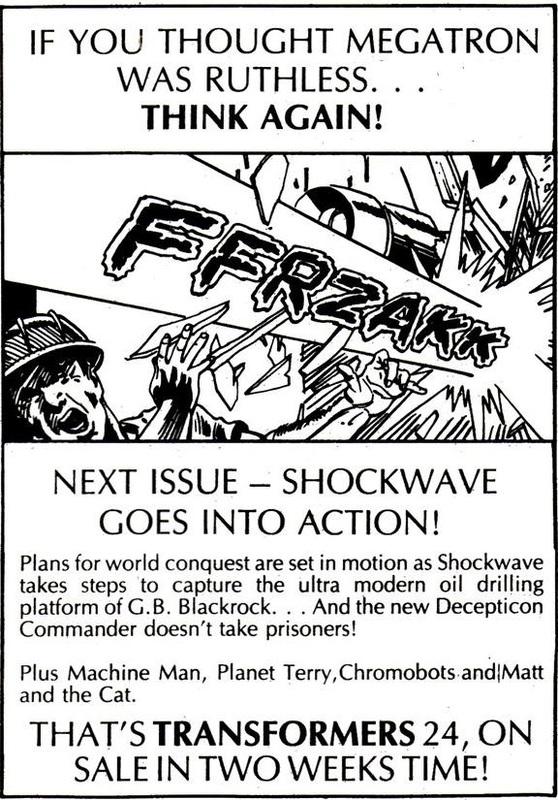