Nothing He’s Got He Really Needs, 21st Century Schizoid Man. 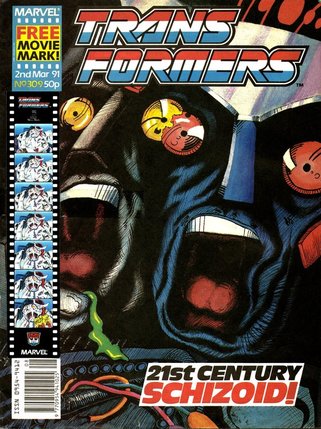 
Obviously there’s only one thing to talk about this week...I mean fortnight. The one thing that matters. The paper stock. You may remember we were previously promised that, as part of the format change the book would be going on all recycled paper. Instead (at least by touch), it has kept to the same two previous paper types, only the rougher and the smoother have switched places in the issue. This won’t be a permanent change, presumably due to the full switch having been cancelled at the last second.

The cover of Ratchet and Megatron merged by Frances Farmer is a good attention grabber, and also interesting in that it’s basically the same as the American. I was going to say this story is the last time the US cover wouldn’t be used on one of the parts, but it actually looks like the Movie Marks bookmark (which I’m guessing is normally done for film/TV rather than panels from a comic, it’s designed to look like a reel of film) uses Wildman’s cover. Though the alterations to make each reuse look like it’s moving are a bit clumsy—the mouths on the first few frames are poorly altered—it still makes for an unsettling image to have in your Roger Red Hat book. If it is adapted from the cover and not just a close copy, it looks like Wildman drew more of the body than made it onto the final version as well.

The cover tag-line, based on obscure 1969 King Crimson song 21st Century Schizoid Man is a bit odd for a reference as well (if Furman was still editing I’d assume this was a Prisoner nod), but someone is clearly a fan as the editorial makes the same joke. 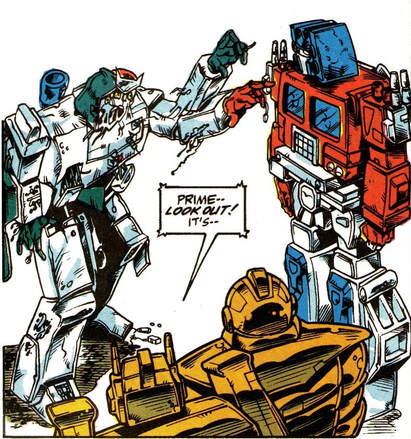 Monty Python's Flying Circus!
The story itself opens with a reprise of the full page spread from the end of last issue. But this time with Stephen Baskerville on inks, and the difference is staggering. An already striking image has so much more detail to it, likely helped by Wildman feeling more confident in his work at this point. These two will be the backbone of the book till it ends, and the partnership (after various trials on the UK stories) is only going to go from strength to strength.

Though for all it’s the horror imagery that people remember, what’s key to the success of the art if how Wildman’s more humanised take on the characters allows for the discussion and debate from last issue to continue with it feeling natural. It’s hard to imagine how Prime and Kup discussing euthanasia would have looked with everyone doing the Delbo Pose.

It also sells the pathos of the Ratchet hybrid perfectly, plus the shocked reaction of everyone present as it stumbles towards them. In particular as the Ratchet half reaches out a hand to stroke Prime’s face and attempts to say his name (“PHRUUMN!”). Which understandably completely freaks the Autobot leader out.

Any chance of dealing with the situation carefully is undone however by Kup walking in (oddly to report they’ve just arrived in Earth orbit, rather than being punched out by Grimlock five minutes earlier) and seeing only the Megatron half, firing a shot that wounds and being prepared to kill before Nightbeat stops him with exposition recapping his theory from the last story and adding the smaller explosion probably merged the two poor robots. 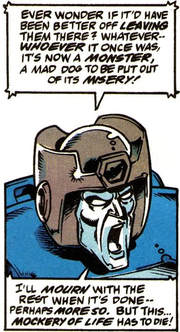 Kup auditioning for the American police.
Kup instantly sets his stall out that death is better than living like that and regardless of whoever is in the Fly inspired horror, they’re a monster now. He can’t debate the issue at this point though as they ignore Waverider’s warning (look at all the Waverider love) and get squashed into the wall by the now Megatron controlled mesh, who then goes half-cheerfully off to kill whilst arguing with his better half (“NUUUH—NUUH!” “YUUUS!”).

Which is where Kup and Prime have their big argument, with Kup determined to protect all the Autobots, active and deactive, aboard during the difficult period where they’re establishing Earth orbit (a plot device reused from the Evil Rodimus UK ark back at the start of 1990, where has the Ark been anyway?) and that Megatron must be stopped, no matter the cost.

This time I’m actually on Prime’s side, all Kup has to do is take down one unarmed and mentally confused pained being with non-lethal force. Surely not something that’s beyond his security force? It’s in character as Kup is clearly blinded by his hatred for Megatron and frustration at the surrender, but it means he’s not thinking straight. 30 seconds after the appearance of this unique being is hardly the time to decide if Ratchet can be saved or not. All of which leaves Prime in an emotional blind. 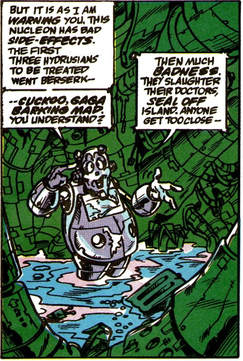 Actually more like if C3P0 and R2D2 had a baby.
The second half of the issue starts out as comic relief as Grimlock, now on Hydrus Four (there has to be a time disconnect between the two plots of this story as he only left the Ark moments before the hybrid appeared), is deeply annoyed with the dump of a swamp and his useless C3P0 style guide who manages to get lost. Though there is the sense that, as the guide recaps his reason for being there, Grimlock is more venting his frustrations and insecurities over his actions rather than genuinely thinking his comfort is worth more than his troops (being pushed along on a trolley like the weekly shop), creating a nice parallel to Kup.

The Guide also gives us some new information: Yes, there is a miracle cure for terminally ill robots up ahead, but all the people who tested it went mad after they recovered and now defend the well with terminal force. And again, this assumption on the behaviour of people fighting great pain and mental stress makes for a parallel to the A plot.

The Guide’s words are almost instantly proven true when they run into one of the nucleon victims, who actually does look like C3PO, crossed with a Terminator. The fight has some fun in it (“Keep...away...the tap must not—” “Me give you tap, tap hard!”) and gives us a final ironic appearance of Grimlock’s t-rex mode in the series. But it quickly turns bitter as Grimlock realises the body is a barely animated corpse that pulls apart at the slightest touch and this isn’t killing, it’s cutting away dead tissue. Which gives us a downbeat cliff-hanger a Wildman manages to get an impressive amount of dark emotion out the t-rex head in a close up as Grimlock ponders. 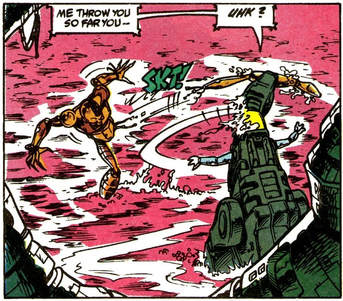 Grimlock sure loves his dino mode.
This is an excellent opening, nicely balancing some morbid but memorable action and horror imagery and surprisingly adult debates on mental health and what constitutes quality of life.

The sidebar on Transformation is very keen to reassure readers about the new format with talk of the return of AtoZ (starting with a colour reprint of the Thundercracker/Thrust one. Oddly despite using the correct layout it’s called a Fact File here, suggesting someone didn’t know what the name was), the new Machine Man backup and the free poster next week.

With, finally, the new colour story at the front of the comic, the reprint moves to the middle and is once again broken into smaller chunks. Though, impressively, the different earlier type of NEXT box this story uses is faithfully recreated for the new end to part two of Enemy Within!

Blaster has shrunk his picture box down to fit in more letters and reader art (though he’s keen to point out they don’t have space for a dedicated art page, unlike the American book), with said first art being the single most 1991 image possible of Optimus Gazza, the Auotobot leader as the crying footballer. 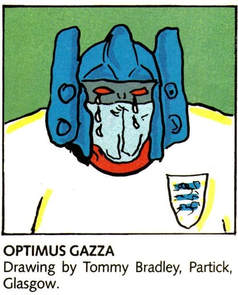 Welcome to the '90's.
Gavin Fearnley of Leighton Buzzard asks for clarification of the various Galvatrons and their relation to the 86 film. Which lets Blaster again assure us we’re in a different continuity now, and amusingly he’s dismissive of the movie with “We tried our best to tie in with the Movie Continuity at the time (it was some four years ago). Let’s forget about it”, if only later Transformers comics had been this prepared to move on.

James McDonald of Livingston writes in to complain about how awful non-transforming Transformers are and hopes for a reissue of the proper Megatron toy. All Blaster can offer is the forthcoming Overlord, which is a comparison I’m not sure the IDW version would appreciate. That is the first mention of the character in the West though, even if his likely role in the monthly version of the comic will never happen.

Chris Payne of Mortimer is the G.I. Joe: The Action Force fan and declares dropping it the worse decision the book and ever made and he’ll no longer be buying. Which simply makes Blaster go “Ya-boo to you!”

This was the first time I’d read the Machine Man miniseries, and it already was more striking to me than Action Force had ever been with its memorable, though very early ‘80’s, depiction of a run down 2020 populated by robots. 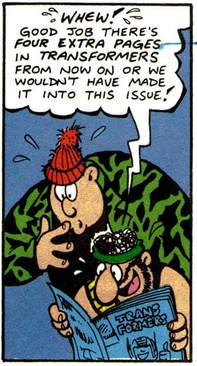 Not as good a cover.
Oddly we’ve still no Next Week page, it instead being given over to a full advert for the Transformer-A-Wall poster, a 1.5m high version of the Powermaster Prime art you can colour in. The kid in the advert having coloured Prime in green.

Which leaves Combat Colin on the back page, musing it’s lucky there's been an increase in the size of the comic, else they’d never have made it into the book at all. This distracts Colin from the Bad Hatter, a new Batman inspired villain who sells Colin a new bobble hat before running off cackling. The new hat instantly makes Colin evil through being too tight...setting up Colin Vs Steve next week!

Which is really the only next week spiel I need to make. Though I should also say my new SHORT STORY is out now! And it’s cheaper than the price of life. 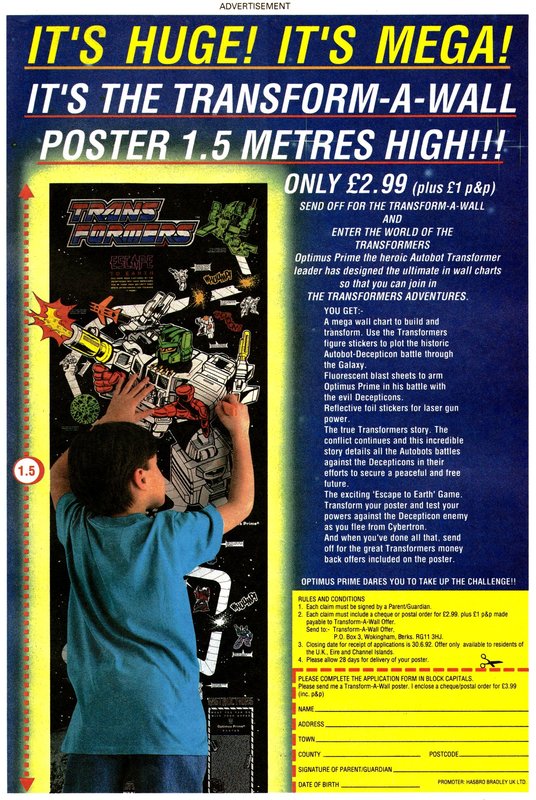