Do You Wanna be in My Gang? 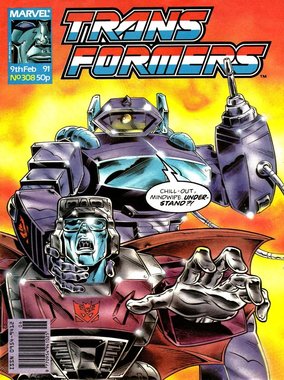 
Ha ha ha! Maybe we should be called the Ex-Decepticons then! I mean, all three of us are supposed to be dead? Want to join? ‘Fraid we gotta kill you first!


The format of the book has shifted and changed several times over the years, but with issue 308 we hit a real end of an era, the final weekly issue after over five years of a continuous seven day schedule.

And to be clear, even though the next issue is two weeks away, this is the final weekly rather than the first fortnightly. The cover off-sale date is for the following Saturday of release, presumably meaning that there was a week there with no Transformers comic at all.

This is a shift of course that brings us that bit closer to cancellation. Despite the best efforts of Marvel UK to launch American format books here, weekly was still the standard for kids comics and an increased gap—even if done as much with the good intent of avoiding breaking up the stories so much as for low sales—is a real sign of how we’re teetering on the brink at this point.

"And I've got a plan you're all going to love!"
All of which gives this issue a vitally important job: To make sure ever reader comes back on the 16th of February. The cover, by Stephen Baskerville, placing Shockwave (a popular character from the early days of the franchise still in his iconic look) front and centre for the second time in a month despite only really making a cameo appearance again is a smart move on this score.

Though I’m not sure about his odd pun at the Decepticon he’s holding by the neck: “Chill-out Mindwipe. Understand?” It feels like it’s supposed to be an Arnie style quip, especially with the bolded emphasis on the last word. But it doesn’t scan and doesn’t sound much like Shockwave either.

Inside, if we have to open with an old story, The Enemy Within! (in the full colour Collected Comics version) is an excellent choice, both in terms of quality and length of time since we last saw it. Though the heavily toy based art does look very antiquated next to the main strip, very much feeling like it’s from a whole other era of comics.

The third act of Eye of the Storm plays out in two different locations. The one that gives us our cover is fairly simple, but also hilarious. Mindwipe and Triggerhappy have finally had enough of Scorponok placating Starscream, so they’ve deserted, flying away with their former leader shouting at them. This seems out of character for Mindwipe, who has Zarak’s loyal right hand stooge previously, but then, it has been a few years since he’s even spoken and people do change.

The gag here though is that they’re so terrified of Starscream, they’re sharing paranoid theories of what he might be up to as they fly off. At which point Starscream cheerfully pulls up alongside them with a happy “Hi guys!”, making them instantly shit themselves. It’s perfectly timed comedy, and Starscream’s Lord Flashheart style laughing as he confronts them on the ground is perfect. 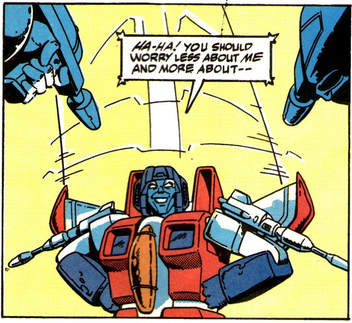 Gotta love 'im.
The day doesn’t get any better for our two defectors as they’re immediately pounced upon by Ravage before Mindwipe is grabbed by Shockwave. Which is where the claim a few weeks ago that we’re firmly into a new continuity is made crystal clear in-fiction as everyone reacts as if Ravage and Shockwave have been dead for years and not, for example, both involved in Time Wars, a story with both Triggerhappy and Mindwipe in it. The editor doesn’t even bother to change one of the “See issue” boxes.

Though Starscream’s quip about having to die to join the group is again priceless. It’s interesting to compare how Furman writes him here compared to his first story. This Starscream is a lot more casual and...well... he’s the Jack Nicholson Joker really.

This does of course mean that if you’re not a fan of Starscream plotting stories, this isn’t the issue for you. Still, we end on a decisive statement of intent for the Shockwave plot that’s been bubbling away for some time now: He and his motley crew (now including two Decepticons who ran away from Scorponok to avoid working with Starscream who couldn’t go five minutes without being press-ganged into working with Starscream) have just declared war on Scorponok. 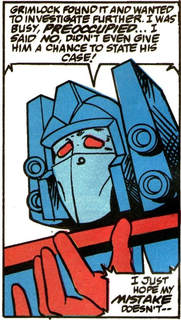 Prime doesn't half get through some speeches from this point.
Surrounding this, the Ark plot is somewhat weaker, though it does start with a shock as Prime—continuing to make bad judgement calls—ignores Waverider trying to report and gets on the SPACE tannoy to announce his big plan to reunify the species to fight Unicron: They’re going to unconditionally surrender to Scorponok.

Which is ludicrous. Yes, Scorponok is approachable compared to previous Decepticon leaders. To the point that twice now, when faced with a mutual crisis (Starscream both times), he has worked with Optimus for the greater good, without the need for a surrender. Coming up with some sort of proof of Unicron would probably be a better idea.

Plus, Scorponok is only commander of the Earth forces, who since Straxus was introduced have always been presented as subservient to the Cybertronian commander. Who have invariably been less approachable. How will this surrender persuade that, much larger, force to work with Optimus? Furman deals with this by just ignoring the home front, we’ll never see a replacement for Thunderwing and Cybertron will be exclusively populated by Autobots before everyone gets called home. 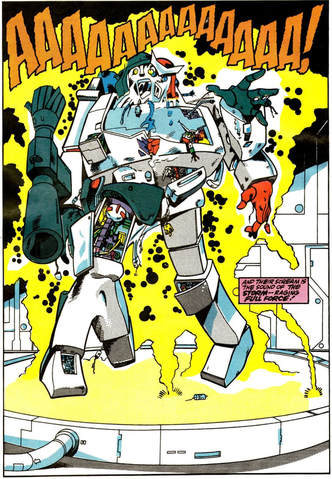 Hello nightmare fuel.
All of which firmly puts you on the side of the shocked and horrified Autobots listening to this announcement. Prime is big on ultimate sacrifices, everyone else, much less so.

The issue does end with a bang though, as Grimlock blasts a shuttle out of the Ark’s landing bay, meaning Prime finally has to listen to Waverider. But before anyone can process this, Nightbeat’s fishing rod hooks on to Ratchet. And also hooks on to Megatron as what appears on the pad is possibly the most famous full page spread of the series, a melted together monster made of the two Transformers. Shock can hardly cover the reactions of the watching Autobots, and it’s pure nightmare fuel that perfectly fills the brief of making sure everyone will be back in a fortnight.

Despite this story showcasing all the worst qualities of how Furman writes Prime, it’s been a successful taking of stock that managed to move the pieces into place for the series final big push without it feeling artificial. Good dialogue for everyone else and some smart scripting overall makes this a strong winner.

On art, it feels as if Wildman is being more himself on the Starscream pages, which are huge fun and show more clearly what we’ll be getting from him in the future. Though the big landmark change will come in a fortnight.

That had better be a great bookmark.
Transformation only makes the briefest mention of the forthcoming format change (“sad but true”), mainly telling you everything that happens in the American story bar the last page. Which is odd as the comic is usually only this dismissive of bad imported strips. The sidebar very quickly talks about the change in schedule, but again emphasises the increase in page count, free gift, future posters and free gifts and the rerun of Machine Man 2020. So it’s certainly trying to make it a positive. All of which leaves only a small gap to correct a mistake from issue 304, John Marshall did the cover rather than Baskerville.

Combat Colin survives his fall to the top of the building by using his Biffer Gun to bounce back up to the bottom, grabbing Mutant Master in the process. But as the mutants grab Steve, this creates a stalemate (“Cheek, I changed my socks last Tuesday!) that results in the villains retreating. But Mutant Master promises the moon bridge will not be built! Creating a cliff-hanger to be picked up on later.

Blaster is unable to answer Steve Rammond of Stoneclough’s question about where Sunstreaker, Hound, Cliffjumper, Brawl etc. all are, but can say the Mechanic now works for KWIK-FIT and Robot Master has a packing job at Hasbro.

Steve does suggest that, rather than the VVH, Blaster uses a ghetto blaster playing terrible music at deafening volume to torture stubbies instead. Coupled with Nicholas Pollard of Stoke Bishop being angry an Autobot would use the VVH at all, this makes Blaster decide to take the suggestion on as a compromise. Meaning the stubbie who sent Kevin Smith of Cardigan a letter from Dreadwind along with his toy gets two hours of Saviour’s Day.

Obviously, with a big important format change to sell, there’s no need for a Next Week page again. Instead, The Machine Man Update is reprinted from issue 25, with the opening paragraph changed to reflect the current comic, though the reference to the now long forgotten Big Ben has been left intact. Yes, there’s an irony in reusing something from when the book first went weekly again as it goes fortnightly, but it amazes me Marvel UK has managed to lose three parts of Target: 2006 and Man of Iron, but still had this in a drawer somewhere. The design, like the reprint, also feels like it comes from a very different time from the rest of the comic.

Now you lucky devils don’t have to wait two weeks until the next Transformation, as I’m back on Friday as usual. Which is also lucky for me as I don’t have to give you 28 pages and a free bookmark as recompense. 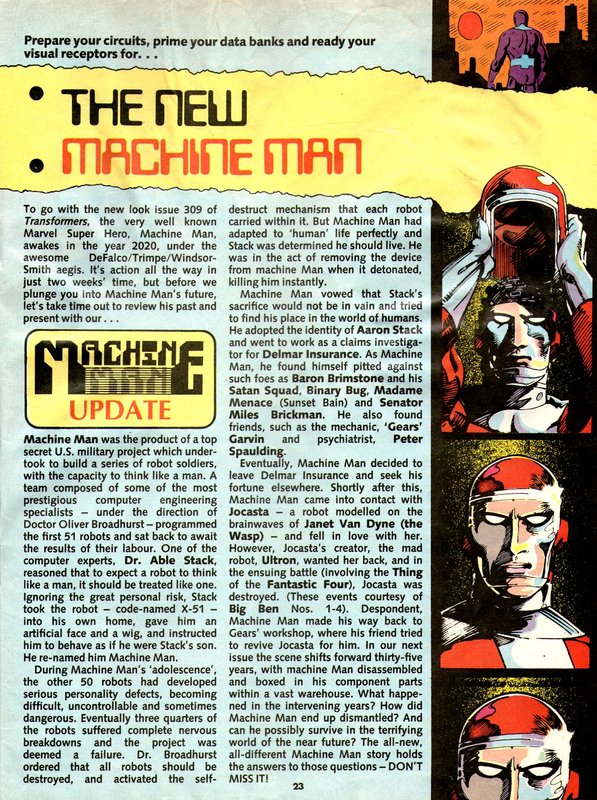