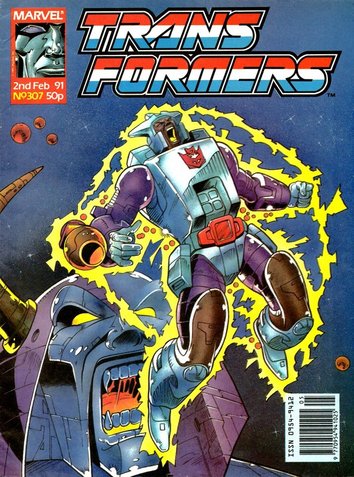 
One side effect of having a local lad now working full time on the US series is that for the first time in many years we get an American related cover by the interior artist. Wildman’s cover is perhaps a little flatly coloured, but it’s image of Galvatron being tortured by Unicron does rather sell the shift in the story within.

The four part structure was never very kind on the American stories, so it’s something of a relief to say that the advantage of changing to three for Eye of the Storm is that it neatly divides itself along the three act structure, meaning each issue has its own distinct feel and plot beats. This is likely especially notably here because Furman knew the risk of doing a talky issue was boring younger readers, shifting location and characters helps to avoid that.
So we only get two, bookending scenes set on the Ark this week. The first of which finishes the conversation between Nightbeat and Prime, with the detective offering a literal lifeline for Ratchet by presenting a dimensional fishing rod that will hunt for the medic in the “trans-time system” he may have become trapped in between Megatron’s base and the Ark. Which actually gives us a solid pay-off to Prime’s chiding of his troops last week: Given one iota of hope that Ratchet might be OK and Prime becomes distracted from big problems as anyone else. 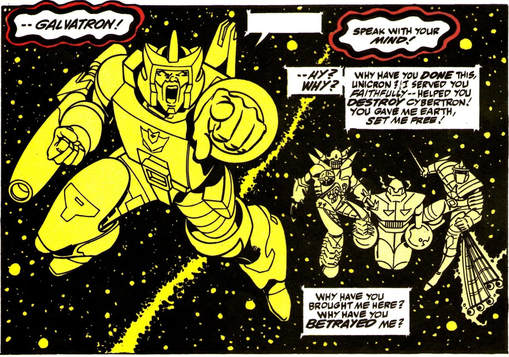 Looks so much better when Yomtov basically just doesn't colour it.
And problems don’t come bigger that Unicron. The bulk of the issue is an almost shameless recycling of the scene in the ’86 film where Galvatron is created. The Decepticon leader has been summoned for a purpose (from a possible future rather than the back end of a space shuttle), to go ahead of him and cause trouble before he arrives on Cybertron. The leader refuses, is tortured into submission and goes off with some other created by Unicron servants (Hook, Line and Sinker here) whilst plotting his private revenge.

The key difference here is that this Galvatron has already done everything Unicron wanted and is mightily pissed to have been betrayed like this. Unicron—and Furman perfectly captures the smug sarcasm of the film—cheerfully points out that wasn’t him who gave Galvatron the Earth, just a possible future version.

This is actually important retrospectively as people often talk about the Marvel Unicron as if he was a multi-dimensional entity as he is in several later continuities, with this version being the same as the Dreamwave or Armada takes. This is simply not the case here, this Unicron is one guy in the one timeline, same as anyone else.

This does of course open up a plot flaw, this Unicron can see all possible futures, every consequence of every action. It should be impossible for him to lose. He even flat out says that the Rhythms timeline is one that might still happen. As twenty years is nothing to him, why not wait and act in exactly the same way he did there? Or at least use the power to have a look at how Galvatron is likely to react in these circumstances. Ego perhaps, but it rather weakens his ultimate villain status to have this amazing power and use it so badly. Especially as it will never be mentioned again. 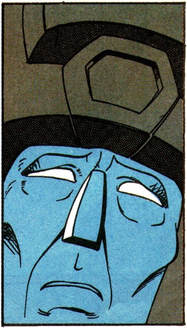 Oh balls.
If the middle is derivative, the final three pages present us with something very new. In the Ark’s life support medilab, Kup responds to a break-in, only to find Grimlock grabbing the Dinobots. The following scene is electric, from Kup’s shock that Grimlock would do this to his own, through Grimlock impassioned plea that there is a potential cure out there that Prime has dismissed for being too dangerous, but his Dinobots would be prepared to take the risk to leave this mockery of half-life behind.

The genius of Furman’s writing here is that Kup is sympathetic, even agreeing with Grimlock’s point that old hands like them know when to bend and break the rules. But this poacher has turned gamekeeper and he can’t betray Prime’s trust in having made him security chief. He’s genuinely regretful as he starts to tell Grimlock he can’t let him take the bodies... before falling for a distraction (and his face as he realises Prime isn’t actually standing right behind him is an early Wildman US highlight) and a sucker punch.

And again, Grimlock is exceptionally well written, apologising and admitting what he probably never would if someone were around to hear it: Prime is an idiot, but still the boss and Grimlock is not a traitor by nature. But he’s prepared to compromise his principals for this, as one way or another, the Dinobots will live again!

Every single change mentioned.
The final coda is more interesting that the main event promoted by the cover, mainly due to over familiarity with the source of the Unicron scene. It’s well done and probably played better for readers for whom this was an early “Tribute” to the movie before that had become a tired idea, but it’s entirely perfunctory in getting characters from A to B. The Grimlock and Kup scene however is more than worth the cover price, being one of the most memorable moments from this part of the run.

Wildman continues to find his feet on art, though I do have a correction to last week, pointed out by the man himself on Twitter. Despite what the botched UK credits claimed, he did not ink any of this himself, the duties being split between the aforementioned Harry Candelario and Bob Lewis, both of who are credited this week.

Transformation is very excited about the big changes coming in issue 309. More pages, a glossy cover, the first part of The Enemy Within! reprint (In the National Interest ending with a full instalment again) and free gifts! Though oddly it very carefully walks around avoiding saying “In two weeks”, odd that. I wonder what it can mean?

Combat Colin is smart enough to realise the dragon must be illusionary as dragons aren’t real. Unfortunately for Steve, his assumption the horrid creatures in the Ministry building must be the same results in a solid punching. Things go equally badly for Colin as his new Biffer-Gun (that fires a boxing glove on a spring) merely bounces of a horrid creature and sends him flying out of the top—or rather bottom—floor window. Is this where our hero hits rock bottom? 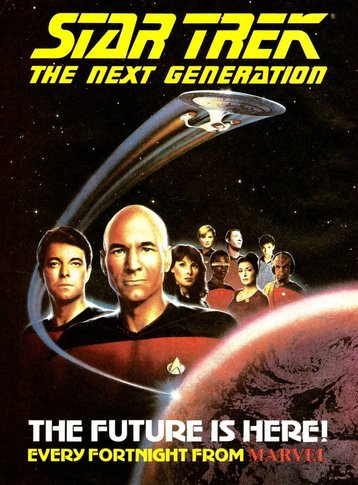 What is Data looking at?
A new advert for the Star Trek: The Next Generation comic filled me with unexpected nostalgia as it’s basically the framing artwork used on all the season 1 VHS releases.

Blaster gets a letter from Graeme Frame of Stenhousemuire talking about how great the current G.I. Joe storyline is.

Based on the reply it seems the Joes were at one point simply going to take a twenty issue break (though as that would take you very close to the end of the series it was still likely intended to be a permanent one), before it was decided dropping it outright was for the best after the “Nays” won. Though it’s not clear if these Nays were readers or Marvel UK staff. Still, we’re promised a Spring or Summer special to wrap the whole thing up.

We also get a letter from Quintus Commander, a mechanoid offering to help sort Dreadwind out. Which is kind, but redundant now that Christmas has been and gone. Quintus does however ask that his toy be sent to the Bristol Children’s hospital, suggesting the name masks an older reader with a kind heart.

Next week, no one has a kind heart when it comes to Scorponok.