There's No Escape From the Claws of the Alien This Time. 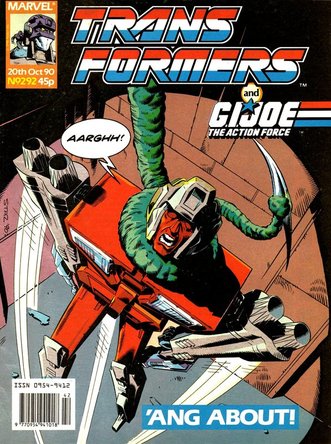 
The cover experimentation continues this week, as Staz goes for a moment based directly on a scene from the book, but which isn’t a direct steal from a panel. We also see the return of the terrible cover pun with “’Ang About!” accompanying Windsweeper being swept of his feet. Which would have been the pun they’d have gone for if they could have been sure anyone knew who Windsweeper was.

For the reprint, the second, now third, part of Legacy winds up with a very nice new cliffhanger of Death’s Head going after Shockwave. So far this has probably been the most successful breaking up of longer issues we’ve had in quite a while.

The third part of our American story ups the ante by bringing the monster in. But first we get to see exactly what Furman thinks of Pretenders after Bumblebee sends his shell into battle, only for Thunderwing to mock the idea and blast a big hole in it. Which sends Bumblebee into shock and makes him collapse on the floor. Not such a great gimmick after all. 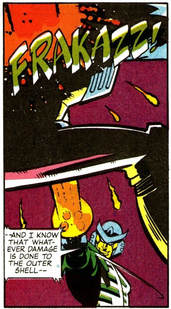 That's certainly one way to write out a gimmick.
Windsweeper meanwhile is cheerfully staying out of harms way. But fate has made him the Harry Dean Stanton of this story and a big tentacle comes down from the ceiling and grabs him.

Which is when the action cuts to Blackpool.

Though you can tell this is still an American book with an American view of Britain as it’s raining.

A tramp walking along the beach with his dog suddenly comes across a giant purple Transformer with one yellow eye and an obscured but pointy left arm. Of course, with a bit of seaweed over his face you can’t tell who it is, even when talking in a very logical fashion about how the witness must die before crushing him.

This would of course work better for Americans who haven’t seen Shockwave in over two years than the Brits who saw him just last month. This is also the point that it becomes clear the promises over the last few weeks that the American stories were now going to sync up with the British was a blatant lie. 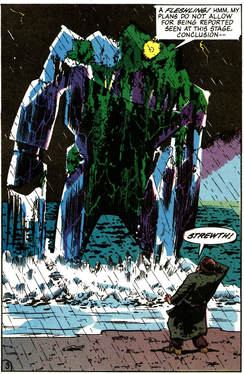 Could be anyone.
It’s still an effective sequence though, especially as on page human death is still very rare in the comic and the tramp’s look of total fear as the hand comes in to crush him is captured perfectly.

Speaking of fear, a rare use of vehicular kibble means Jazz’ headlights (after some gentle persuasion from Thunderwing) light up what’s grabbed Windsweeper. As good as he is of course, Senior wasn’t likely to match HR. Giger on a good day, and the Alien was designed on a very good day. But his big mouthed monstrosity is still good creepy fun and leads us to the key moment of this instalment: Thunderwing’s refusal to let Needlenose fire at the creature to save Windsweeper as he doesn’t want to risk hurting what has the Matrix.

The creature, afraid of meeting someone who has “The Oneness”, feels and as Thunderwing gives chase, the remaining Decepticons realise he’s gone to far. Which is a nice note to end on, Thunderwing’s obsession hasn’t been hugely well done as an arc, but its impact on those under him has.

Despite there not being a huge amount of plot advancement till the last page, this remains an effective and creepy story with Senior hitting every beat perfectly. 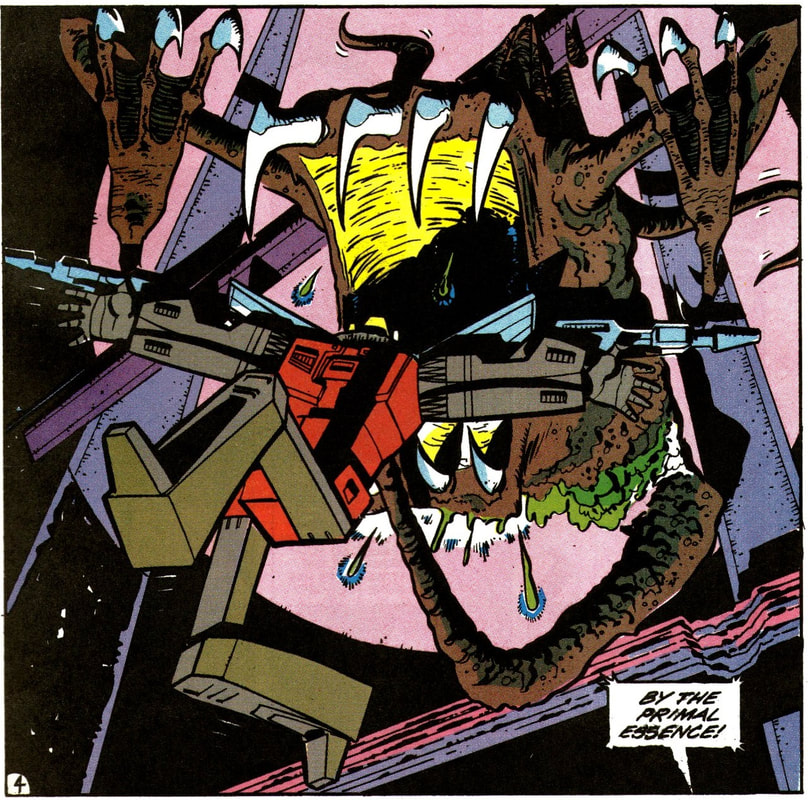 How does that grab you?

I don't want to go.
Transformation, as well as once again mocking the Joes length of time in South America, starts preparing the way for a new letters page host. Clearly as the longest serving one to date someone figured he needed a David Tennant like goodbye tour, which starts with him taking over the sidebar to assure readers claims he’s going to be replaced aren’t true and if this so called new host shows up he’s going to get BLASTED. But he’s expecting all the readers to write in and protest if anything does happen. There’s also a tease for a forthcoming Autobot sew on patch free gift.

On his own page Dreadwind feels a bit run down, but that’s understandable considering he gets a letter Neal Kalita of Pogmoor saying how terrible he is at length before ending with a cheery “Did you know there’s a pop group called Primal Scream at No.26 in the charts?” Dreadwind does at least get to explain what ACU stands for to Joe Bishop of Buxton. Automated Construction Unit of course.

Combat Colin actually takes the time to give a long eulogy to Semi-Automatic Steve about how he will miss him for “Hours”. Luckily out of nearby “Person hole” emerges not a Turtle, but Steve. Who was blown under the shop and stops the robot by just unplugging it. Madprof ends up back in jail, but is at least spared a terrible pun this week as our heroes can’t think of one.

G.I. Joe: The Action Force continues to not leave South America (no wonder the Next Week page makes a thing of them finally getting out), but we do get some great stuff of Destro running rings around the former military commander as he tries to flee with all the money.

Next week, real life Christmas means an Addendum, yes? Let’s just hope those rumours about me being replaced aren’t true. But you’d all write in to protest, right?

Oh, and CHRISTMAS QUIZ is still on! 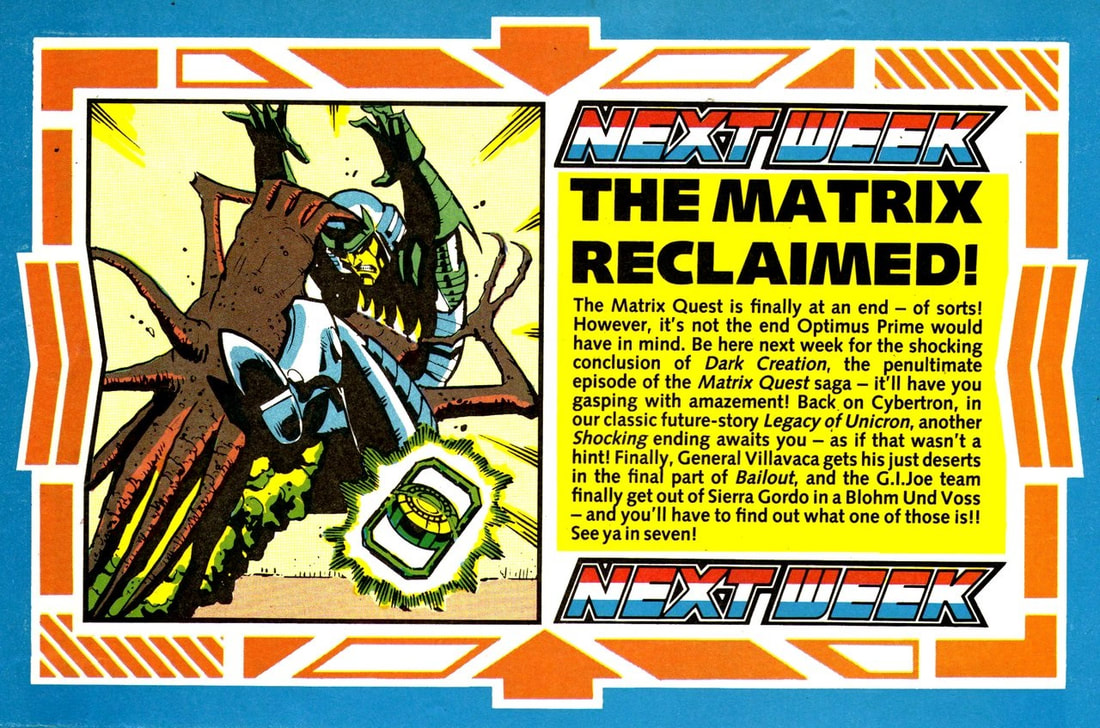