Don't You Open That Trapdoor, There's Something Nasty Down There. 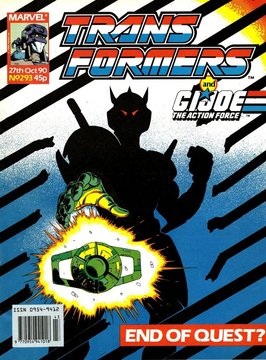 
C’mon guys, get me out of here before I die of embarrassment!


The evolution of current cover style continues, as we get the first of what will sadly become a trend for the first thing you see of the comic to spoil the contents in a way that would cause internet outrage today. Staz’ effort, again based on an interior panel, isn’t the worst example we’ll see, but it does rather give away that Thunderwing will be getting his hands on the Matrix.

Inside, the fourth part of our reprint shows how perfectly structured that original issue of Legacy was as it starts in a way that feels perfectly natural for an opening as Wreck Gar approaches and is shocked by the sight of Unicron. And it’s fair to say the rather brutal death of Shockwave was still shocking to this first time reader.

Oddly, and this may have been the case for all the reprints and I’ve only spotted it now because you can see the shape of the paste job to put the new text in, it doesn’t just use the original NEXT box at the end of the issue. Instead, the colour has been changed and the “NEXT: TOTAL WAR!” is now in a different font. An odd amount of effort for consistency with the current format. 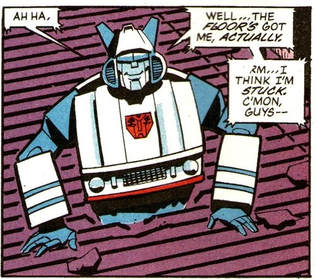 This comic floored me.
In our lead strip, I’ll start with some praise for someone who I am normally scathing of: Nel Yomtov. As the situation worsens and darkness encroaches on our heroes the colours become deeper and more purple and green. Adding to the sense that something very bad is happening. Geoff Senior really does bring out the best in people, doesn’t he?

The Classic Pretenders (shells left behind, never to be seen again now the Action Masters are a coming) are trying to beat Thunderwing to the Matrix, but the high gravity on the moon (and how big a moon can it be to have higher gravity than Cybertron, a Saturn sized planet?!) is wearing them down as they burn up Energon quickly. Which is nice as it avoids Thunderwing just being super duper powerful enough to beat them and a monster all in one moment.

We also get a great jump scare of Jazz being pulled through the floor... only to find he’s fallen through the floor and gotten trapped by his big car hood boobs. And as he turns it into a joke, we see he’s landed on top of the Matrix and the monster.

Never send flowers.
Back in the control room we get a re-emphasis of the disillusion amongst the rest Thunderwing’s troops as Spinister decides to leave the boss to it. Interestingly he’s not yet on the point of desertion, but neither will be do more than send flowers if Thunderwing dies.

Which seems unlikely as Thunderwing casually tosses Jazz aside and goes for the Matrix, which wants to be taken up by its new master. Unfortunately the monster, knowing there’s no future in the Alien franchise, disagrees and goes in for the kill on the Decepticon. Which allows the Autobots to struggle to reach Matrix...

Which is where we get a double bluff that doesn’t quite work as we then cut to the Autobot Shuttle returning to the Ark, where a gleeful Optimus Prime is assured by Hot Rod it has totally obeyed the correct approach procedures. Prime himself is unusually happy and goes straight to the door to welcome back his favourite bauble, only to find (as we get a nice structural call-back to the opening as the Matrix repeats its list of Primes with one new addition) a greeting from a blast and the new Matrix Bearer: Thunderwing!

Which is interesting as this means this story isn’t just repeating the basic structure of Dinobot Hunt!, but also borrowing from its ending of the object of the chase becoming a Decepticon controlled threat in the end. What next, a captured Autobot shuttle being blown up as part of the solution? 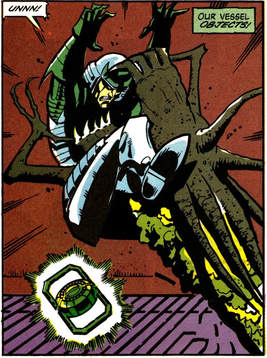 And people said Ridley Scott was a fool for wanting to make the next Alien film about robots.
This has been a fantastic little story, dark and creepy and dryly funny by turns, with gorgeous art and deft character touches that sets up the finale perfectly.

And one final thought, though Grimlock will go on as a mainstay, there no longer being a need to promote the Classic Pretenders means this is the last decent role for the regular Jazz and Bumblebee in the comic. The former will at least get to be represented by an alternate Universe counterpart and a good sized part in the next Annual’s text story, but other than filling out crowds, Bumblebee, a key character from the very first story who in different bodies has been a lead on and off ever since, is basically done in Marvel now. Another sign of how we’re approaching the end.

Transformation gives us the winners of the competition from issue 283, but most notably makes no pretence of the fact the editorial team just flat out hate G.I. Joe: The Action Force, repeating its mocking of their inability to get out of Madeupsouthamericancountry and adding extra sarcasm with “Next week, G.I. Joe try to find their way out of Milton Keynes!” All of which is a solid indication the backup is not long for this world. Though it does make you wonder if the best way to keep readers on board is to make them feel a third of the comic isn’t actually any good.

Speaking of whom, I might as well skip to the end and say yes, the Joes do get out of the country at last, using that sea plane. Who’d have thought? The story then ends with Thrasher throwing the corrupt banana monopoly guy to his death from the plane for daring (from their perspective) to come out with a gun after his plane has been high-jacked. All the Joes aboard find this hilarious. 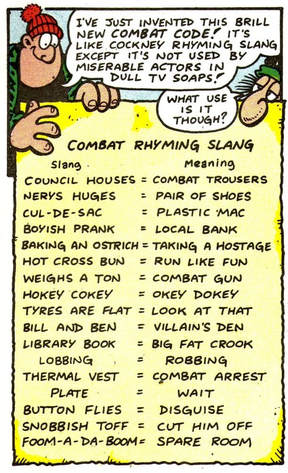 Tyres are flat.
Dreadwind continues his farewell tour as Hi-Test gets to show up again, for the first time in months after admitting he was having to wait for the colour to come back so he could be told apart from the Decepticon. Meanwhile, Robert Murray from Johnstone points out something I missed (though I did note two issues in a row where someone asked the same question!), that Dreadwind published the same letter in issues 284 and 285. I guess, to use the call-back Robert makes to that letter, my shoe size is bigger than my I.Q. Though that’s an insult Dreadwind has the perfect response to by pointing out the size of his feet.

Ben Straw of Wysall claims to be responding to Dreadwind’s request for interesting letters (from issue 284 ironically enough), though he mainly boasts about having read from issue 1 and puts the boot in to the format of the American book. He does however ask about the Predator hand on the cover of that issue (which Dreadwind confirms) and offers to help Dreadwind not having to deal with readers endless questions by taking them on himself, leading to his full address being published and a rather heartfelt comment from Dreadwind that most readers questions are impossible to answer and about the UK/US continuity divide.

Combat Colin returns to the one-off gag strip and a new take on the Combat Code, this time based around Cockney rhyming slang but “Not used by miserable actors in dull TV soaps”. So Council Houses=Combat Trousers.

So library book Bankrobber Man is spotted lobbing the boyish prank, but after an attempt as button flies fails (due to the boys’ Nerys Hughs giving them away) a weighs a ton let’s them make a thermal vest.

Though the policeman who comes along winds up arresting Colin and Steve as well for talking nonsense to an officer. Hopefully they won’t be coming for me next.

And on that note, be sure to hot cross bun over to the Christmas Quiz if you haven’t already, it closes on Monday! Which I forgot to mention in the piece.