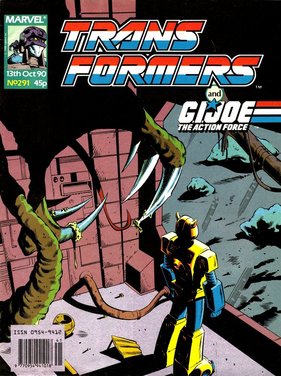 
Of course! It’ so obvious! Why didn’t any of us see this before?


*The new title created for the split issue drops the “The”.


As the new format starts to bed in, the next few weeks will see some experimentation in how the covers will be handled. We’re not at the stage yet where the American are going to be reused (which is lucky for this story as the cover to US #65 is terrible), meaning there’s still a desire to throw as much work at the local team as possible. And there will be some interesting experimental ideas in the weeks to come. Here though, with the need to make a striking Optimus image front and centre last week out of the way, Staz plays with providing a take on an interior panel.

Before diving into the new strip though, I should mention that as this was the first time I’d read The Legacy of Unicron!, it being split into smaller parts and the addition of a new title card at the start of this second half of the original first instalment meant the clever gimmick of holding off on naming the story until the final page was completely missed by me. This also means the surprise return of Unicron wasn’t even for a new reader, but it’s hard to see how that could have been avoided really.

Both shadowing and foreshadowing.
Dark Creation Part 2 opens by continuing the Classic Pretender’s debate, with Bumblebee being surprisingly on the ball in worrying that the Matrix could have been behind all this. We also get our first real example of long term foreshadowing under Furman’s American tenure (rather than just bunging in Unicron and hoping the series lasts long enough to do something with him) as Grimlock declares all they really need to do to stop the Chaos Bringer is for him to have the Dinobots back. And when Jazz mocks the idea Grimlock thinks dark thoughts (with some more moody Senior art) about how this will happen.

It’s worth noting at this point that Furman, who never particularly enjoyed toy promotion anyway, will approach the introduction of the Action Masters by dragging out their creation as much as possible in the hope the book will die before he has to feature Transformers that don’t transform. And he’ll very nearly manage it.

Which brings us to the panel that inspired the cover of Bumblebee window shopping. I’ve alluded to Thunderwing being rather an overrated character before, but it’s fair to say he makes a great entrance in what may be his best showing, jumping through the window at full charge and demanding to know where the Matrix is.

This charming tête-a-tete is interrupted by a quick scene of set up for future stories at the Decepticon ship, where Ruckus is technically on guard but is too busy bitching about his previous treatment by Thunderwing. Meaning he misses that some vital equipment got damaged when his leader thumped him into a console and the power lead to the machine holding Nightbeat and company has been damaged...

The first quest is over.
Back at the base, Jazz briefly tries to use diplomacy to talk rationally with Thunderwing. Unfortunately the Decepticon’s idea of diplomacy—holding Bumblebee in a choke hold—is only mildly more impressive than Grimlock’s Ambassador Fist.

Which leads to a great panel of Grimlock looking disappointedly at his fist after Thunderwing barely feels the punch. The issue ends, after the other Decepticons have joined the fight, with Grimlock seeing if his trex mode will do any better, with rather limited results.

With the accent on action after the slow tense burn of the first part, this is where Senior really gets to strut his stuff. Every panel is perfect and interestingly his art seems to bring out the best in Nel Yomtov as well, all dark and brooding. Throw in some snappy dialogue from Furman and the strong trend continues.

Transformation devotes the sidebar to more promotion of upcoming stories, including things such as Thunderwing merging with the Matrix, the end of the war and the first tease of the Neo Knights with mention of Thunderpunch and Rapture. Odd how the book’s days are numbered with that ace in the hole. It also responds to reader questions about the old guard of artists by saying most have moved on, but Wildman and Baskerville have transitioned to the American series (of course, this is a moot statement as everyone has had to move on from the UK stories now). The main text is also sarcastic about how log the Joe team have been trying to get out of Madeupsouthamericancountry.

Combat Colin is enraged that Madprof would endanger innocent lives, but the scientist just doesn’t care, leading to a passing alien waving a “Totally evil or what?” sign at him. Though Colin and Steve luckily (else “This week’s strip would have ended half a page early!”) manage to dive out of the way of Robocol2’s shots, all seems doomed when it turns out Colin’s Portable Anti-Robot Bazooka is out of batteries. Steve quickly runs in to the Batteries for Daft Weapons shop, but Robocol2 blows it up! As the strap-line says: “Next Week: Aw, buy the comic and find out for yourself!”

Dreadwind gets a letter from Russell Edmonds of Ealing boasting of being one of the few who have read the book from issue one (an idea the Decepticon mocks), before asking how Megatron could have built his planetary reactors in the centre of Cybertron (as seem in the Flame saga) when Primus is supposed to be there. We actually get a sensible answer as Dreadwind says the reactor wasn’t quite in the middle.

Victron (Codename: Vikash Shah) of Kenton writes in to warn everyone about how Kylie and Jason are clearly the latest Decepticon Pretenders. Which makes Dreadwind call for the “Loony detector people”.

G.I.. Joe: The Action Force continue to try and get out of the South American country, giving up on the bus after security is tightened at the border and heading to a port town instead. Where the greedy monopoly guy is preparing his sea plane to escape. Hmm, I wonder if those two events will connect?

Next week, aw, come back on Friday and find out for yourself! 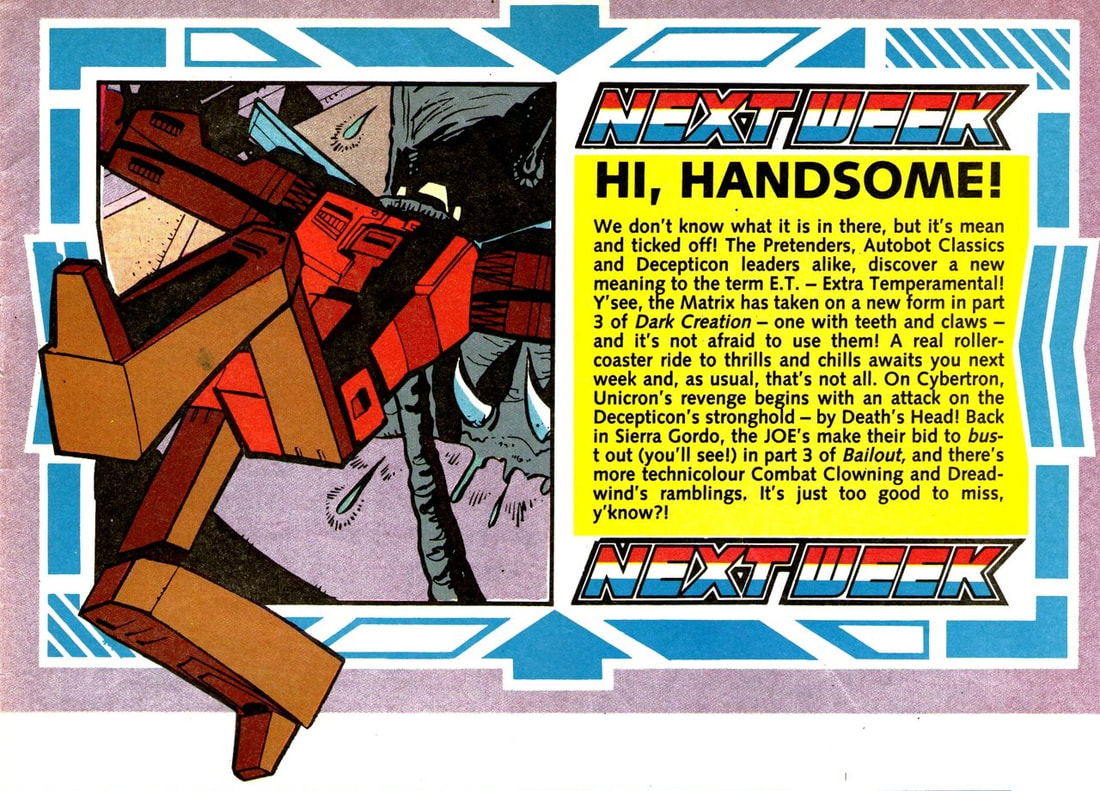