I Can't Decide If You Should Live or Die. 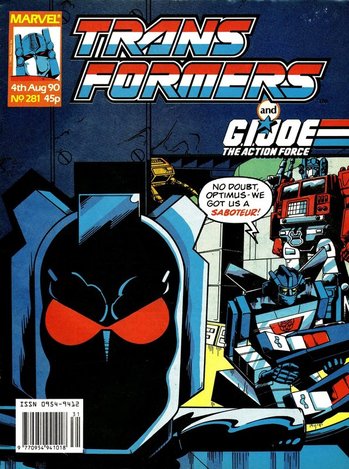 
Not a word, Wheeljack!


We get a rather fun cover this week that assumes a bit of intelligence on behalf of the reader in connecting the looming face of Grimlock with Wheeljack’s proclamation to Prime that they have a saboteur.

Though you could argue the real saboteur was Euan Peters, inflicting the entirety of the G.I. Joe crossover on us for 17 weeks so as to put himself out of work as soon as possible. It’s actually amazing this didn’t drive all readers off and get the book cancelled, forcing him to do the honourable thing and resign in a few weeks to join a monastery and spend the next 27 years praying for forgiveness.

I imagine. It would explain why James Roberts hasn’t managed to track him down for an interview.

As we reach the end, it’s worth wondering to what extent the otherwise noble attempt both to avoid more reprints and allow enough of a backlog to build up so as to avoid having to do this again for as long as the book is likely to run has backfired. In all my years in fandom I have never heard so much as a positive whimper about the crossover, and every single reader at the time seems to have loathed it with a passion. How many of the people with no interest in reprints were still reading the lead strip by week 17? I must admit to have been at best skimming it at the time. Certainly the book has lost enough readers that the UK stories themselves are on their last legs.

However, the real issue is the three strip format itself. Again, perhaps there was no other way to keep the book going, but in terms of stability and structure it has been pretty much a disaster that has seen the book lurch from one reader loosing desperate gamble to another. 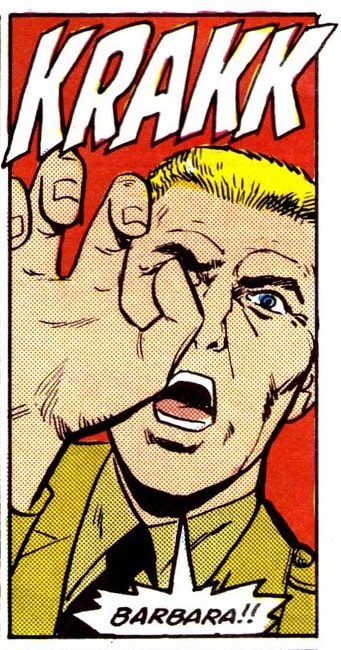 Has Barbara been attacked by the pterodactyl on the front of Doctor Who and the Dinosaur Invasion?
Which brings us to the final part of ...Ashes to Ashes! itself. Which is mainly committed to explaining why G.I. Joe and the Transformers aren’t teaming up on a regular basis after this. Which seems pointless as Budiansky would make one token reference to the crossover (cut out of the UK version of course) and Larry Hama would completely ignore it until Generation 2 was forced on him.

Still, the Baroness sets up Power Station Alpha to explode against the plan and even though this solves the problem immediately, Goldbug and Scarlett are disgusted with her as she slinks off. Meaning back at the Ark Blaster decides the humans who would kill a potentially living being (of which there has been no hint whatsoever) can’t be trusted and so calls of the now unneeded joint attack. Meaning all the concerned parties just sort of go their separate ways as the thrust of the plot just grinds to a halt.

That is except for Devastator, who gets shot so hard by Superion he falls apart. Which as a kid I thought was the explanation for the Constructicons no longer being able to combine back in Desert Island Risks!

Of course, things can’t just end without some closure on Hawk’s sex life. So we get the Baroness having a stooge shooting Larkin as she gets carted off to sing sing (shades of Lee Harvey Oswald), for no real reason other than to make teaming up with Cobra look a bad idea. Causing Hawk to scream “BARBARA!!!” in a way that can only be followed by “Oh, hi Mark”, before crying over her grave in a way that is almost too perfect a metaphor for this series as a whole.

At least that’s over with. 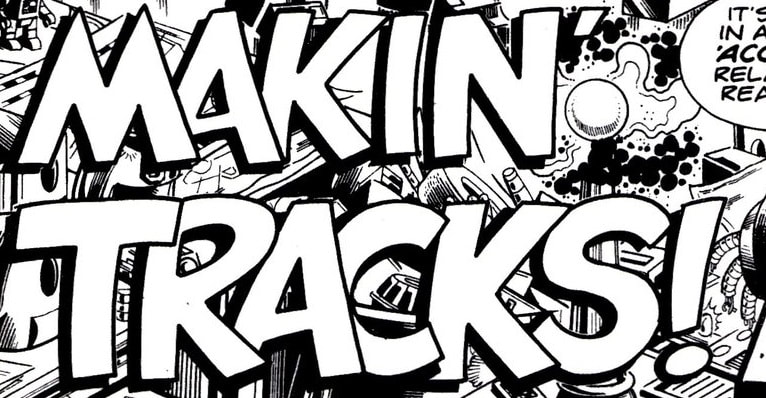 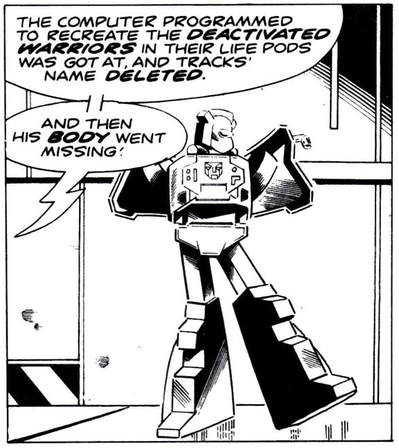 You've got to love him.
The British story, Makin’ Tracks combines continuing the high farce of last week with some housekeeping. The latter boils down to the long ago and almost forgotten promise back in issue 262 that upcoming US issues were totally going to explain how all these dead Autobots are knocking about again. It must have been realised at this point that Nucleon was going to be too far off in the future and likely wasn’t going to connect very well continuity wise.

So to finally cover this—and Transformation spells out this is the long awaited (albeit not American) explanation—we’re introduced to The Body Shop: Wheeljack’s base of operations on Earth that’s way better than the one on the Ark and is slowly going through cold storage to bring them back online.

Of course, Earthbase is only three weeks old and couldn’t possibly have been responsible for the Dinobots and the others, but it’s the thought that counts.

This is all just an excuse for our second week of farce based around the idea Dinobots like to murder people though (alright, you can argue Tracks is already dead so it’s destruction beyond all chance of reanimation). And it is at this the story excels.

First, though it was driven by the toy being re-released, the choice of Tracks as the one Autobot Grimlock doesn’t want revived is inspired. If it had been, say, Blaster or someone we knew he had a beef with it wouldn’t be as funny. Going to all this effort and risking the end of his career to get rid of someone we’ve never seen him interact with just for being vain is much sillier and more entertaining.

The second great thing is the return of oblivious Optimus Prime from last week, falling to notice Grimlock sheepishly standing with his arms behind his back and swinging his legs from side to side during this Very Serious conversation about who keeps trying to prevent to resurrection of Tracks and avoiding the direct questions he’s asked. Grimlock is so adorable here it’s easy to forgive him planning to grab a hammer and smash Tracks to pieces before the final phase can begin. 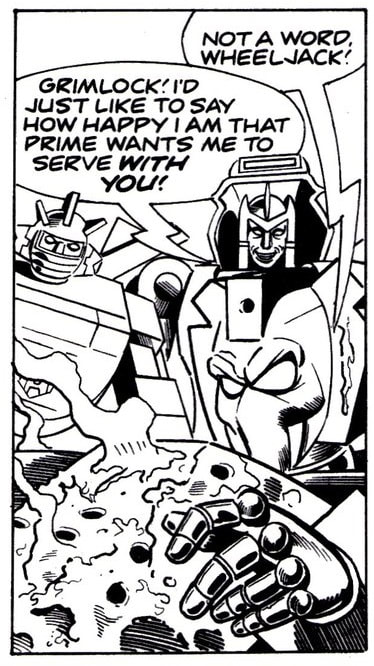 His story has a few holes in it.
Which leads us to the slapstick sequence of the issue, as Grimlock stalks towards the conveyor belt like ACU (which seems to be missing an explanatory * box, but I believe Dreadwind will have that covered in a few weeks) with murder on his mind. Only to get dragged in as well, winding up zapped and waxed and blasted by some pretty lethal looking medical equipment before being deposited, a total mess, in front of Wheeljack (whom he orders to keep stum) and a really happy Tracks.

Still, Grimlock is at least able to reassure himself that Prime will take Tracks away—yes, he hates Tracks so much he was prepared to kill him despite never having to see him again—only to be told by pretty boy he’s joining Earthforce and would Grimlock mind just polishing this small scratch on his body...

Leading to Grimlock chasing him through the snow with a big sword. I’m not sure if we see Tracks again, so this may be the end for him with the whole thing covered up.

That, again, was gloriously fun stuff showing Furman as his blackly comedic best, with good support from Pete Knifton on art.

Transformation isn’t just about explaining the continuity point the British story solves. It’s hugely excited about reaching the end of the “Incredibly long” crossover and the return of Matrix Quest next week (“If you can remember that far back”). Amusingly in the week of Twitter introducing 280 character limits, it turns out the page doesn’t have enough space to fit everything in and ends mid-sentence. Though the sidebar at least lets us know the winners of the Classic Heroes competition.

AtoZ features Swindle and Swoop, and oddly doesn’t mention the Dinobot’s habit of covering up murders.
Combat Colin ends his prehistoric adventure with Steve and the Giggly Sisters giving up their seat on the time ship for him as he’s more important. Which creates a lot of comedic crying but not much protest. Luckily he finds Aunt Arctic’s freeze gun, and uses it to put his friends on ice (“Do not defrost until 1990”) and releases them 70 million years later. Before telling Madprof to shove off lest he has to do time.

Dreadwind is more full of Dreadwind Fails to Answer Questions Properly! than I could possibly have time to cover. Starting by having a mental breakdown when Richard Potter of Cheltenham asks if Unicron showing up 16 years early will change the future. Then he can’t tell Philip Nelson of Cambridge when the Micromaster Military Patrol will be in the comic, who the Pretender Monsters are and then has to sheepishly admit his failure at not knowing who the Jumpstarters were back in issue 272 (“I didn’t realise you meant those Jumpstarters! Silly me!”).

In a clean sweep for all the strips ending their ongoing stories this week, G.I. Joe: The Action Force concludes Cut and Freeze Dried with Cobra getting kicked out of the made up country of the week after the Terrordome scam is exposed. No doubt Battleforce 2000 do something exciting as well. Oddly the Next Week page is in the midst of the Joe action, suggesting two pages were accidentally flipped. 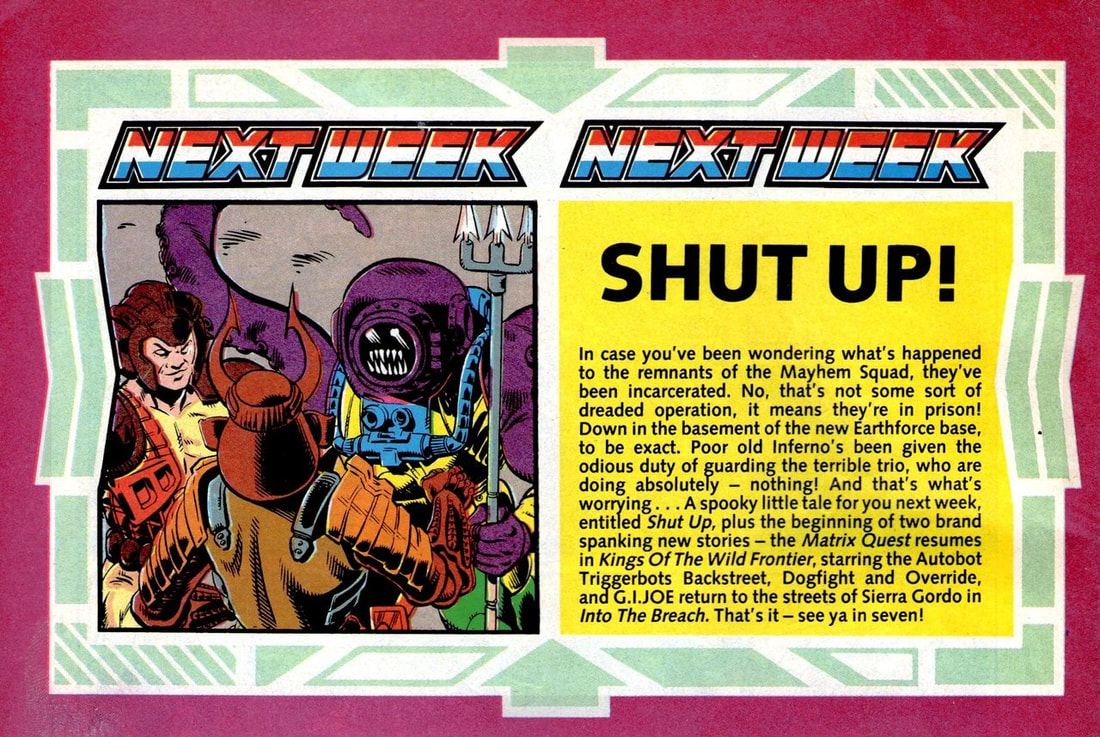