And I don't really care if nobody else believes, 'Cause I've still got a lot of fight left in me. 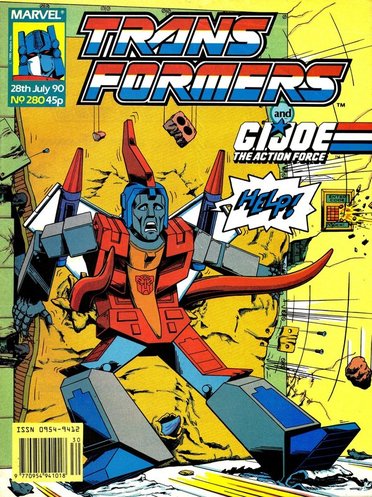 
Though it’s not quite the case for the book itself (I’ll be sticking to the weekly schedule for the website rather than going fortnightly), we’re now reached the case where there is exactly a year to go on Transformation. In 52 weeks we hit issue 332 and the final annual and specials and nothing will ever be the same again. What will you do with your Fridays?

Why read the following five weeks on Generation 2 of course. And then... who knows?

And what better way for me the celebrate this huge milestone than for me to open the comic and find out from the Transformation page that this is the penultimate part of the G.I. Joe crossover.

I genuinely thought this would be the conclusion. It’s likely I thought that at the time as well considering it’s probable I’d twigged how U.S. issues were split at this stage. I have never felt so alone and dead inside. And not one of the buggers who read this site forewarned me I was wrong in my confident assertions last week. I hate you all. 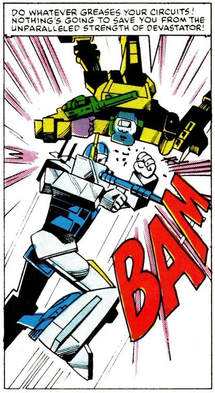 No idea what this is.
It turns out ...All Fall Down! had 25 pages instead of the usual 22. Meaning an insane Euan Peters could drag things out for an extra week. Presumably as part of a kamikaze plot to get the book cancelled.

It doesn’t help there is no reason for the extra length, there being plenty of big panels here to cover the lack of plot progression. So the battle at SPACE Island goes on, Shockwave (shaking his fist furiously) vows to exterminate everyone like a Dalek, Goldbug and the girls plant explosives and a cerebro shell in Power Station Alpha, Mindbender uses his special helmet and the latter (which he didn’t need to use first time around) to shut it down and the exciting cliff-hanger is...everything being over. But we have the promise in the NEXT box of “Loose Ends”. Sigh.

The only other thing of note is a very odd panel from Herb Trimpe of Superion—flying through the air—having Devastator fall out of the sky (despite being on the ground last week/a few panels ago) and head-butting him. Very odd. 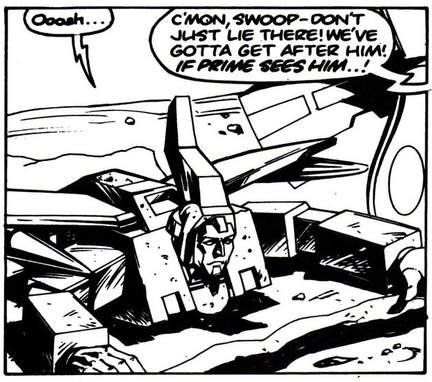 Don't mention the war.
Thankfully the British story gives us the first of two weeks of high farce where Optimus Prime is the straight guy to Grimlock’s shenanigans. The 4,000,000 Year Itch, unusually for Furman, owes nothing to the film it takes its title from (admittedly I’ve not seen it, but I’m guessing Marilyn doesn’t go on a psycho killing spree) but is instead more Fawlty Towers as Manuel and Polly have to hide their crazy new pet from Sybil as Basil keeps her distracted.

There is actually a pretty dark concept at heart here: Every four million years Slag’s emotional dampers break down and he goes kill crazy. The last time it happened he killed his entire unit. And the other Dinobots covered it up.

Now, the flaw here is that, knowing this was coming, the sensible thing for Grimlock to do would have been to send Slag—and the other Dinobots if needed to keep an eye on him—out on a special mission into the frozen wilderness where he could run around like a loon without fear of hurting anyone. But of course he’s in Earthbase (named as such now, looks like the editorial last week wasn’t so wrong after all) and Optimus Prime has shown up for a visit! Meaning the other Dinobots have to keep Slag out of sight as Prime is generally against mad killers in his troops. 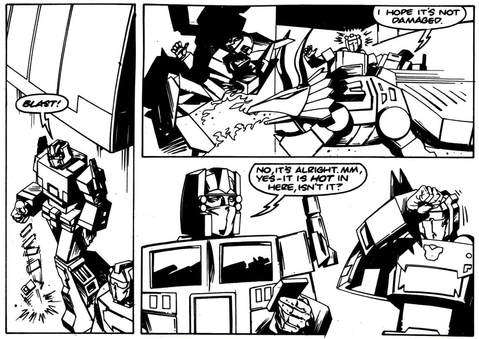 I think I mentioned it once, but I got away with it.
Worse than that, the health inspector is due at 4 as well.

The humour here is glorious though, as Optimus goes around asking very polite questions about the base and its defences as if he’s the Queen, only mildly curious as to why Grimlock is so distracted and completely missing the enraged Slag whooshing about behind him, breathing fire and trying to kill everyone. The most he notices is things are a bit warm.

This means the gags largely depend on Jeff Anderson’s art to work, and he pulls off every exasperated expression and comedy double take to perfection. Visually the whole thing just swims by so quickly it’s almost a shame when Slag burns himself out and the issue ends. How about some extra pages for this one comic Gods?

As well as breaking the terrible news about the crossover not being over, Transformation takes the time to thank Bryan Hitch for drawing last week’s cover (presumably at short notice else they’d have have done so then). This, alongside the mention of his work on She Hulk, shows he’s come a long way since we last saw him two years ago.

AtoZ covers Steeljaw and Superion, whilst Combat Colin is rescued from the tar pit by a pterun...pterra...perr...big dinosaur bird! Turns out dinosaurs are much smarter than we thought (and on that score Stringer was likely right!) and Colin making the t-rex laugh last week made him friends.

Tracks shows up a week early.
Mercifully—after being told by Bouncelot last week I’ve been getting her name wrong as “Auntie” and thus ruining the joke for years—Aunt Arctic is quickly eaten by pack of t-rexs.

But Madprof has one ace up his sleeve: His time machine can only take one other person back to the future with him? Who will it be?!?!

Now that’s how to do an effective cliff-hanger.

Dreadwind has to explain again at length about the Collected Comics 16 FUBAR to John Crewdson of Bradford. Complete with the mysterious reference to a tortoise. And I’m still none the wiser.

We also get a useful Dreadwind Answers a Question Correctly! as he tells Robert McDonald (a true-five-year-long Transformers fan) of Bexhill-on-Sea than an artist currently gets two weeks to draw a story. Unfortunately the same reply gives us a classic Dreadwind Fails to Answer Questions Properly! as he’s never heard of this two and a half hours Five Faces of Darkness second Transformers film that Sky has shown.

I really could not give less of a fuck about the regular G.I. Joe: The Action Force story after the horrors of the opening. Lots of running about on ice and people snipping at each other. 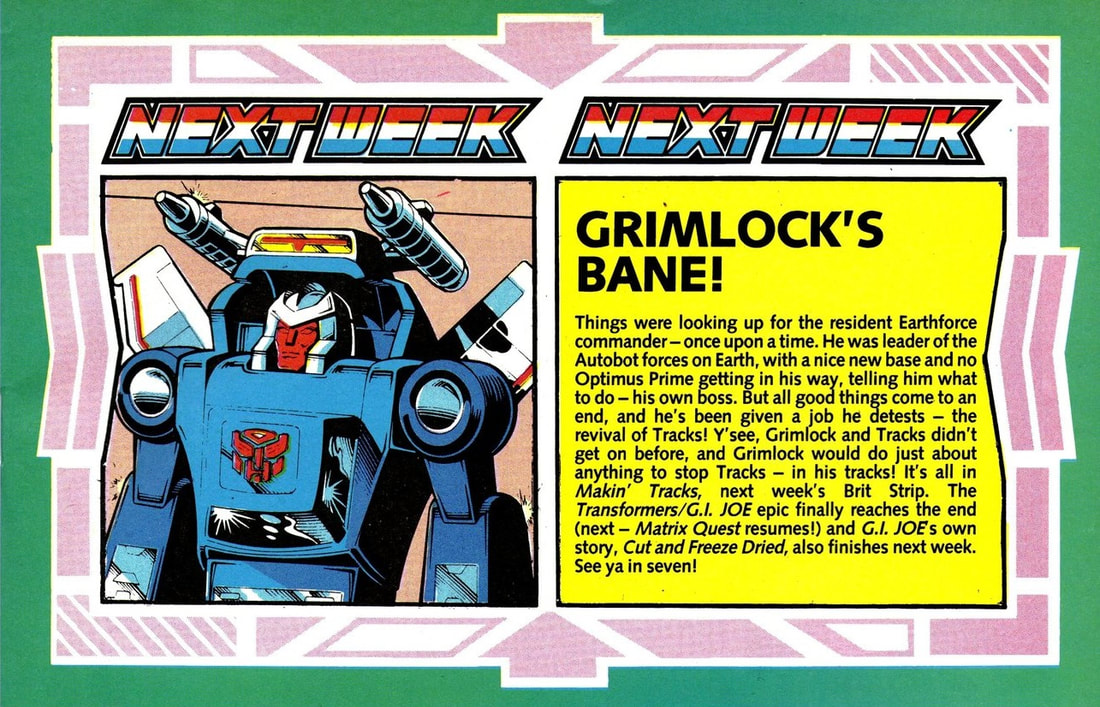