Why Don't We Break Up? 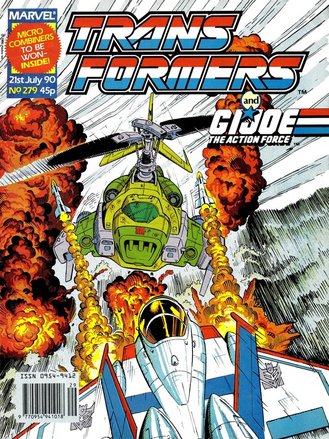 
First up this week, a bit of old business. Long terms readers may remember my confusion over the Headmasters video competition back in issue 130. Well, one of the winners talked about their experience in THIS thread at TFW2005, and after some prompting from TMUKer Jim Wilson he described the video he received. Based on that—unlike any other UK Transformers tape he’d ever seen and in a card slipcase—I would suggest my original guess was right and this was a special tape put together by Hasbro UK a good deal in advance of the formal British VHS release six months later. Vindication!

The most striking thing about this week’s cover should be the return of Bryan Hitch, presumably done as a quick favour to Furman. But whilst it’s a dynamic Starscream Vs. Springer action scene evocative of his work on Wrecking Havoc, it’s the complete absence of a cover pun that stands out. Was the tagline man on holiday? I liked lilastromech’s suggestion on Twitter of “Jet to the Chopper!”. 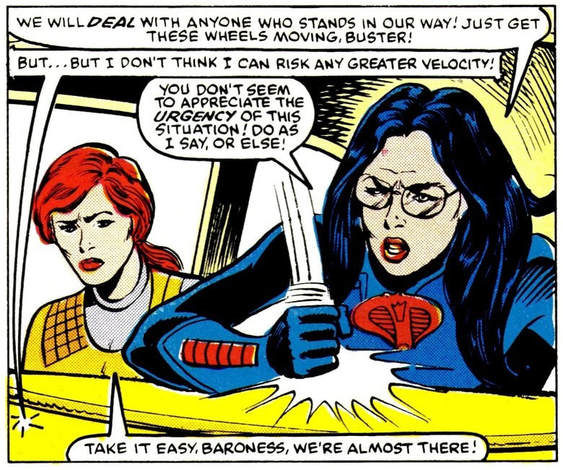 "Yeah, that's it Baroness. Spank me"
The penultimate (and that’ a good word. The only better one is “final”. The only better two words are “Never again”) instalment of the Joe crossover is mainly about Goldbug. It’s perhaps strange that the only bit of toy advertising the book had to do is shoved into the back half of the final issues, though I suppose the flipside of him being less relevant that in his British debut is that there’s no Jimmy Saville joke here.

The sequence here is rather bizarre as the story tries to wrap up Bumblebee’s feelings of inadequacy even though this plot hasn’t been touched upon in close to three months. So he brazenly declares that he now realises he’s just as good as an Aerialbot and now has the self confidence to be called by a better name than Bumblebee: Goldbug!

It’s worth remembering that all Bumblebee has done in this story is be tricked into exploding. I’m not sure what was supposed to be the ego boost there.

Even more hilariously, after insisting in a rather pompous fashion that involves referring to himself in the third person (“Goldbug will join you ladies in this urgent undertaking, we will not fail”) on going with The Baroness and Scarlett to sabotage Power Station Alpha, all he winds up being is transportation. And is treated with utter contempt by the Baroness, who slaps his dashboard for driving too slowly whilst snarling “Do as I say, or else!”. So much for the new more valued Goldbug.

The other strand of the plot is the combined Joe/Cobra/Autobot forces attacking the Decepticon SPACE island (yay! One last time) as a distraction from the main “Two girls and a bug” plan (it’s worth noting before next week the heroes have decided PSA isn’t sentient at this point), with the Joes being so badly briefed they think there are just some green construction vehicles hanging about on a tropical island.

Still, at least we get to see a proper combining sequence for the first time in years, which is almost nostalgic. But when the best part of your comic is Goldbug abuse, something has gone wrong. At least it’s good training for when Blaster gets his hands on him. 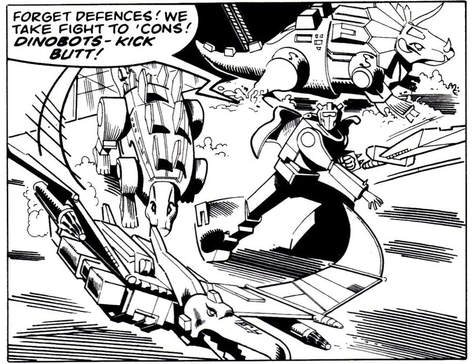 Grimlock: A man with one plan.
Our British story, Divide and Conqueror!, is an unexpected direct follow up to last week’s as a group of Decepticons led by Soundwave attack Earthforce and the Autobots have to take the fight to them as Wheeljack hasn’t fixed the acid breathing bats yet.

Hilariously the narration claims the location of the base has been a closely guarded until now, even though we found out two weeks ago that they have a phone number. I’m still very fond of this opening scene though, as Staz goes to town showing the two sides battling it out, with two particular highlights being Octane getting sliced down from mid-air by Grimlock’s sword and Soundwave ejecting cassette’s for what feels like the first time in years (I think Space Pirates! was the last occasion?). It’s a small thing, but it’s always fun to see his main gimmick in action. We even get a fun bit of politics as Soundwave muses on how Starscream’s divide and conquer plan makes sense, but it’s very convenient it’s the flier off doing the much safer prong of the attack.

This is where the story takes a downturn. It’s very hard to do a two stage battle in just five pages, and this means the Starscream side of thing falters. First up, it’s not really “Divide and conquer” as that usually means splitting your enemies forces, not your own. And Starscream’s “steal fuel from an oil tanker” plan isn’t really anything to do with defeating the Autobots, making it more “Divide to do two completely different things at the same time”.

Luckily—after a fun bit of environmentalism where the tanker captain is prepared to dump his oil in the sea only for his mate to point out that this would be a really fucking stupid idea—it turns out Grimlock has also divided his forces and the Survivors have arrived! 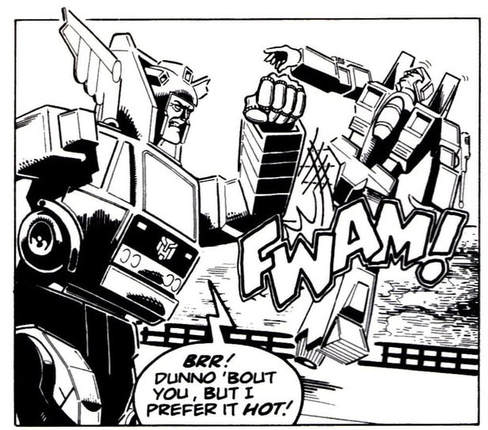 Get in the fucking sea?
Though Springer acts as if this was all part of the plan, Grimlock wasn’t expecting a two pronged attack and had no reason to make the Survivors go float in the ocean on Broadside beyond clearly wanting shot of them. Yes, Grimlock made the Survivors Get In The Sea. A leader well ahead of his time.

With the page count almost up, there’s little chance for the fight to be more than Inferno punching Starscream into the sea (see, it is catching on) before flying away in a huff. Some nice mild mockery of Carnivac—pleasingly still without his shell—is about the only interesting thing here. It’s frankly the most embarrassing Decepticon defeat since anything to do with Thunderwing. It’s not even really clear why he has Soundwave call off his attack when they were still doing quite well, beyond giving the tape deck ammunition for his own power grab.

This would have been much more effective as a two parter giving each half of the plot enough time to breath. It is however helped by Staz having a lot of fun with the art. I remember he still had the opening page for sale at one Auto Assembly and I regret not picking it up on the rather flimsy reason “Well, it’s black and white, it looks the same as the comic!”

Transformation is hugely excited by Death’s Head: The Body in Question starting its 8 part serialisation in Strip from issue 13, with the emphasis being on the Furman/Senior team up and the origin of Death’s Head being revealed. However, the thing that really stands out about the editorial this week is Earthforce repeatedly being called Earthbase. Well, you know how it is when a name is on the tip of your tongue but you still get it wrong. 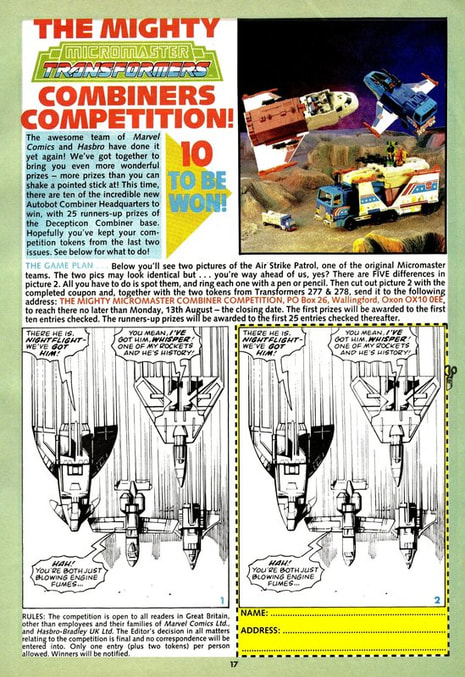 The differences are in plane sight.
AtoZ covers Streetwise and Sunstreaker, and people only familiar with the former’s TFWiki profile will be surprised there isn’t a single nonsensical Shaft joke. Meanwhile Combat Colin makes a t-rex laugh and discovers Professor Madprof and Auntie Arctic are the secret villains, planning to freeze dinosaurs and revive them in the present. Colin’s efforts to stop them are thwarted by stepping in a tar pit like some sort of Dinobot. This is one of the more throwaway Colins, but the gag of Steve only realising they’re in the past after having it very carefully explained to him is great.

In a week where Dreadwind is pretty wishy-washy in his answers (“Flattop is the Micromaster. I think”), there’s a pretty bold response to James Gale of Pollok’s query about where Perchance to Dream Galvatron came from, emphatically saying to read Aspects of Evil. Of course, in an issue where the editorial team can’t tell the difference between Earthforce and Earthbase this isn’t a ringing endorsement, but it at least suggests Euan Peters thought there was only one new Galvatron. It’s probably lucky he’ll be leaving the book around the time the third or second or same Galvatron turns up.

G.I. Joe: The Action Force introduces Battle Force 2000, one of those terrible bunch of toys Hama has no time for because they’re not ninjas. To the point that in a series that despite being treated by its fans as a realistic war drama has very few casualties, he’ll kill them off. Luckily Blaster (not that one) solves the mystery of how to deal with the Evil Brainwashing Waves because he’s always listening to his Walkman even when on duty on a mission and it turns out any sort of ear muffling with stop you punching people.

The real highlight though is Fred failing to bluff his way through a conversation on old G.I. Joe continuity that would be just as baffling to British readers. He’s actually happy Battle Force 2000 attack before he has to name that Eskimo.

The exciting thing though is the competition for the Micromaster bases. As well as the coupons from the last two weeks you have to play spot the difference on two seemingly identical panels of the Air Strike Patrol from Aspects of Evil: Scorponok. This seems to have been put together quickly, the Geoff Senior art from A Small War! Used for the coupons was coloured and textless, this is just a straight up comic panel. 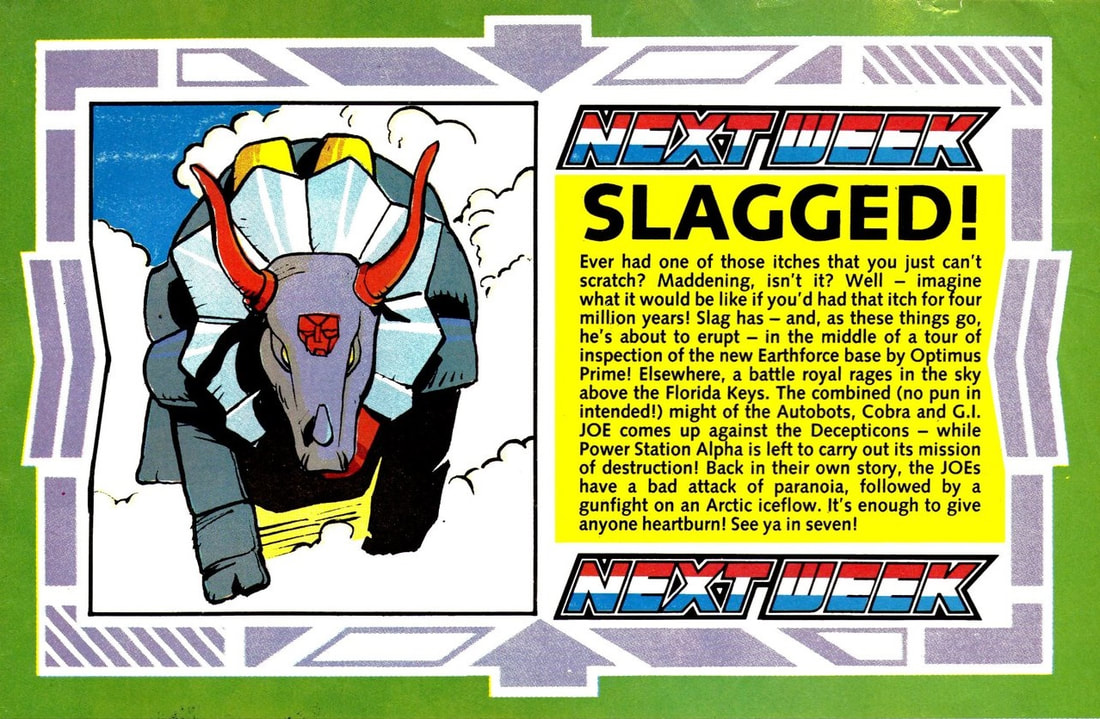