Our House it Has a Crowd, There's Always Something Happening and it's Usually Quite Loud. 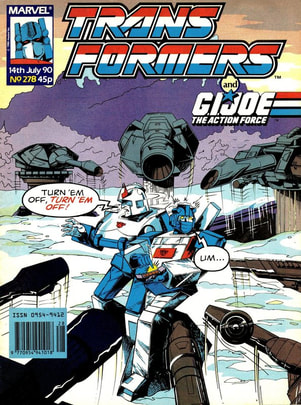 
Geez, Wheeljack, did you have to be so thorough?


Jeff Anderson produces one of the nicest covers of this period this week, taking the simple concept of Prowl and Wheeljack surrounded by automated defences and putting lots of energy into their poses and comically worried expressions. All of which adds a lot to what on paper can’t have been the most exciting of pitches. 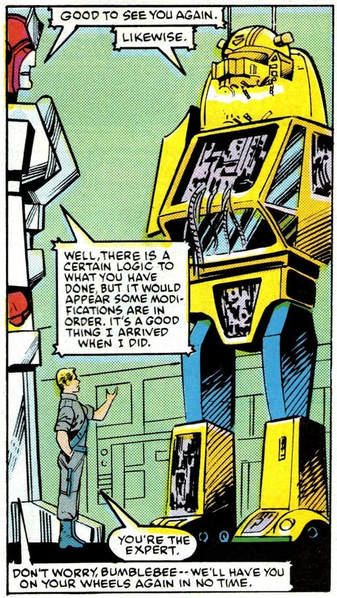 WHAT DID YOU DO TO HIS FAAAAAAAAAACE?
Speaking of not the most exciting of pitches, the second part of All Fall Down! just sort of meanders along like an incontinent old granny on a Zimmer frame taking eight hours to go down the shops and leaving a trail of increasingly stale urine behind her.

Worryingly for a story heading towards its finale, this part is mainly taken up with characters meeting and debating what to do. Starting with Ratchet, who saunters into the Joe base and is surprised when Main Frame tells him Bumblebee isn’t dead and they’ve started to fix him. Which makes you wonder both what Ratchet was planning to do if he didn’t think he had a patient (steal Bumblebee’s stuff?) and how he failed to notice the upright and mostly put back together body of his “Little friend” until it’s pointed out despite it being in his line of sight the entire time.

We do get a good gag of the two Autobots having an awkward conversation as Bumblebee’s new head is separated from his body by chains. And as Mindbender arrives (and gets glared at by Snake Eyes. See Trans issues 199, 201-203) we get some more fun Bombshell dancing, though it’s odd the monocle clad lunatic somehow knows the little thing Main Frame is poking at will do something so as to shout at him to stop.

As for the rest... Phhhht. Hawk bemoans his love life as he goes to take charge of things at the Pentagon (after getting pissed off his face earlier in the day), Serpentor and Blaster argue about whether they should try and save Power Station Alpha in case it’s a living being, Serpentor and Hawk argue over how many lives is acceptable collateral damage...

*Stick comes in from the side and pokes me*

Well, that was certainly five pages. It says a lot that the UK team normally number the pages of each comic strip on the bottom left hand corner of each page (as opposed to the overall issue page number in the white border), here the person who does that has clearly nodded off as well as the numbering goes from 3 to 5. And no, I’m not going to go check if a page has actually been skipped... 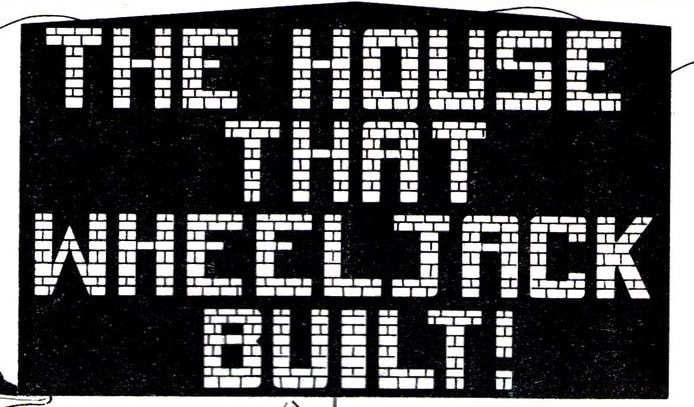 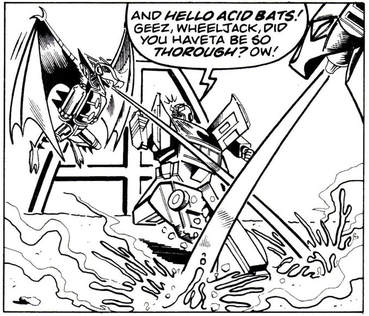 Wheeljack: Batshit insane.
Luckily, our UK story counters this by being one of my favourites. Even if (as with The Living Nightlights!) it’s clearly a case of a title in search of a story to justify it.

So Wheeljack has finished building the Earthforce base (or house if you will) and calls everyone (except the Survivors who are presumably on a training course) to show off the amazing defences. Which once turned on, can only be turned off from the inside.

What works here is that this is exactly in character for Wheeljack, even if we haven’t seen much of his mad science in the series to date. But there’s also lots of great little character moments, such as Grimlock over enthusiastically slapping Wheeljack on the back for a job well done and Prowl very carefully pointing out the flaw in all this like a frustrated school Ma’am.

This is actually a really good story for the practical no-nonsense Marvel Prowl as he quickly takes charge and races through the death trap having ordered aerial support (from guess who) and backup from Jazz and Bumblebee. He even offers some wry humour as he’s going along. Which you need as Wheeljack clearly is insane, including acid breathing robot bats as part of the defence system. Because why the hell not? 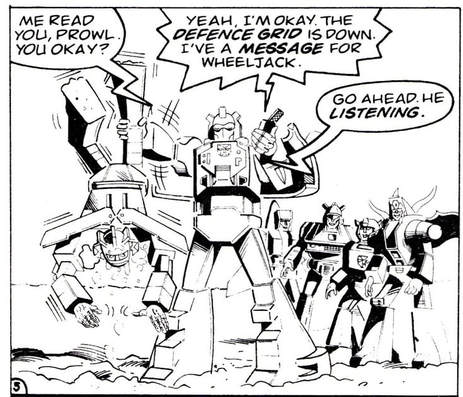 He's put his foot in it.
The short page count does mean we quickly cut to him having overcome all obstacles and shutting the defences down, but we do get one final brilliant visual gag of Grimlock casually holding Wheeljack upside down and dunking his head in the snow as he passes on Prowl’s message of not doing such a good job next time.

This may well be my favourite of the gag strips, mainly because the humour comes out of everyone acting entirely in character. Throw in some really nice art from Pete Knifton and the fact this actually has consequences that will last into next week and we have a winner.

Transformation oddly talks about an ongoing Knights of Pendragon signing tour as if it’s been mentioned before. However, whilst you may have missed the chance to meet the team in the Midlands and North, you can still grab them in various London and Kent comic shops across the rest of July.

AtoZ covers Soundwave and Starscream, with the former notably having been made blue rather than purple. Indeed, he’s almost sarcastically blue, with even his faceplate now in the colour. Probably to hide the squiggle that makes Delbo think he has a mouth.

Combat Colin’s Prehistoric Adventure kicks off as our heroes return from Mars (expecting to be back in time for Coronation Street), only to crash into another spaceship piloted by mysterious and unguessable villains and to wind up flung into the past and facing a t-rex! 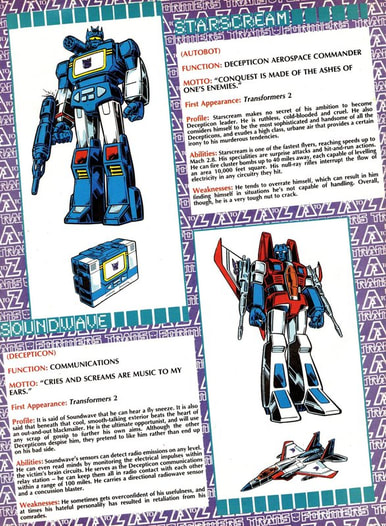 Bluewave.
Most notably however is the Giggly Sisters being described in narration as Colin and Steve’s “Friends”. I thought there was real love there.

Dreadwind gets a letter from Andrew Dornan of Fareham suggesting AtoZ be dropped as Universe is out there now and kids can just look at toy tec specs if they really want the info. But then we’d miss blue Soundwave Andy, did you think of that and the fact I’d get a paragraph out of it? No, of course you didn’t.

After Hi-Test does a sterling job trying to explain to Jack Robinson of Cranleigh the reasons for which Classic Heroes did and didn’t get to be in Perchance to Dream, we then get a prime Dreadwind Fails to Answer Questions Properly! as Dreadwind is unable to even confirm to Roy Hughes of Ballyvolane that there were missing words in the British story in issue 261 as he doesn’t have a copy. If even Marvel aren’t buying the book, what chance does it have?

G.I. Joe: The Action Force start a new story, Cut and Freeze Dried, from issue 68 of the Joe comic. Little of note happens though beyond some new toys getting airdropped on a base in the made up country from last week whilst Cobra try and attack them. More exciting is the second Micromaster competition coupon.

To be honest, if not for the British story I could see Dreadwind not bothering to buy this one either. 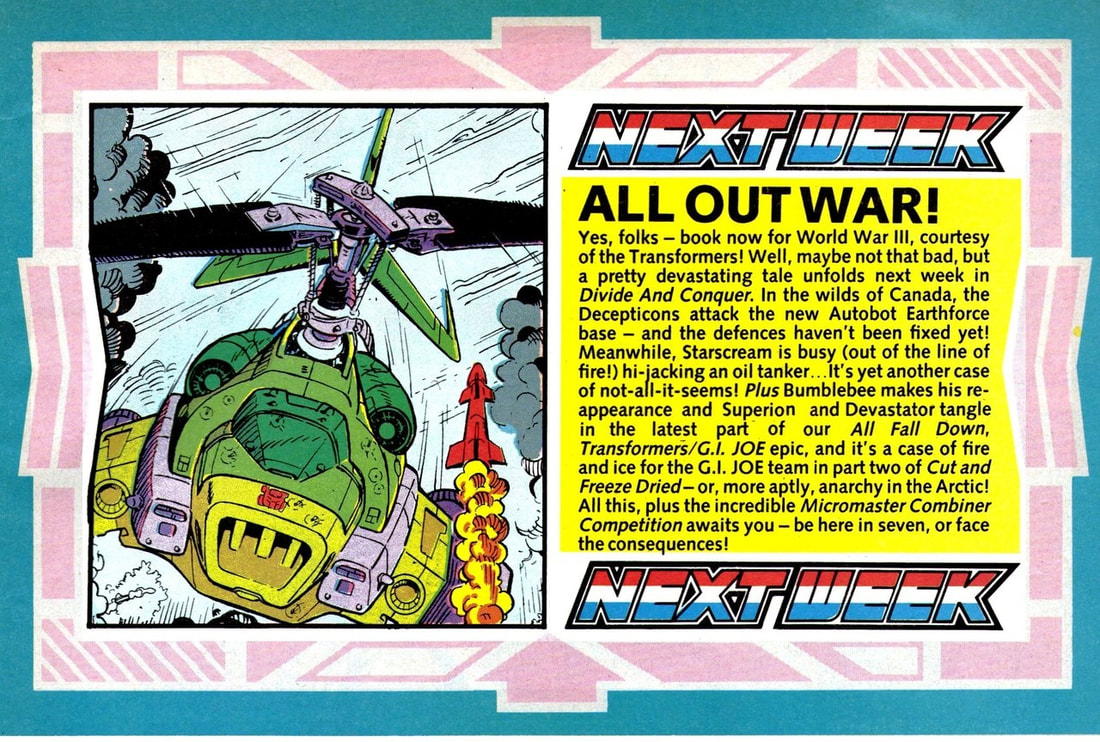