So Sure That You Break Out Tonight, I’m Freezing in the Other Airport. 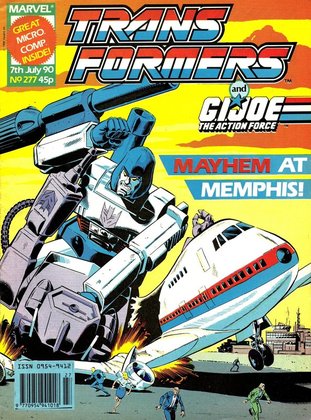 
Firstly however, I must do my duty as a law abiding citizen, and report this battle to the proper authorities!


It does feel something of a relief to be heading into the final chunk of the Joe crossover. It’s actually amazing to think it has only been running three months, it feels so much longer.

And it’s only going to get longer.

One not on titles before I jump into this week, Ryan Frost pointed out in the comments a few weeks ago that the preceding chapter’s original title was taken from the American version of Ring a Ring a Rosies, “Ashes, ashes, we all fall down”. The UK version being all about sneezing is probably what confused whoever slapped the titles on the last three weeks, hence the bodge job on it.

All of which means, the concluding chapter’s title is a continuation. Which would probably be clever and thematic if Higgins had done it for all four parts. 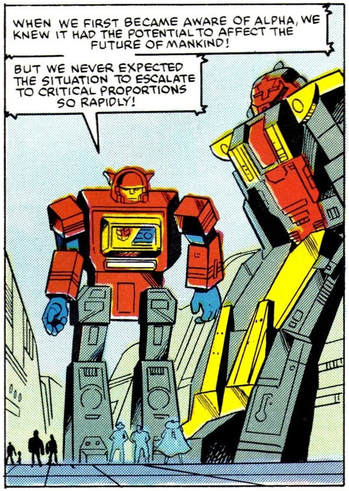 The least clunky exposition in the issue.
Diving into the comic itself, and there’s not really a lot to say as three out of five pages are given over to recapping the story so far. Starting with a splash page of Omega Supreme and Blaster talking in a way that no one ever would to fit the entire plot into five speech bubbles. Most of which, such as clarifying to each other that they are Autobots, doesn’t need to be squeezed in right away and could have more naturally been fed into the next couple of pages. All that really needs to be clarified here is Earth is fucked.

The next few pages showing what they’re imagining Power Station Alpha is up to at least have some visual flair as it drills into the Earth and boils the oceans. But the opening exposition salvo covered this, making it fairly redundant repetition. Amidst all this Blaster’s slightly out of nowhere worry Power Station Alpha may have become sentient gets a little lost, which is a problem as that’s going to be important.

The plot itself starts with Shockwave declaring Dr. Mindbender has outlived his usefulness and sends Bombshell to kill him. Making the building of a bed for him a bit of a waste of resources. Plus I’m not actually sure what Mindbender’s usefulness was to start with.

Luckily for Mindbender, Bombshell decides to try and play silly buggers first, allowing the Baroness (who apparently has free range of the base) to sneak up behind him and shoot him with the BFG she just carries on her person. Which for some reason shrinks Bombshell, allowing Mindbender to grab him as they flee.

After the upward swing of the last few weeks this has been completely forgettable. Still, only three weeks left.

Wing and a prayer.
Internal Affairs! on the other hand, hits the ground running. Literally as we open on Shockwave and Megatron smashing each other about at Memphis airport in an unexpected follow up on last week’s bit of fluff as Starscream has manoeuvred the two leaders into a big fight.

To an extent, revisiting a Mega-Wave smackdown is rather reliving past glories, though it’s actually been a surprisingly long time since we last saw these two go at it, and it always results in some great and memorable imagery. Even if it’s not entirely clear what Shockwave was doing hanging round an airport. Maybe he’s a plane spotter?

I also turn out to have been wrong when I said last week that we’ve passed the last point the black and white stories connect in some way to Furman’s American work as some of the dialogue from the spectators making bets on who’ll win will be recycled into ...All This and Civil War 2!

The meat of the plot is back at Megatron’s base, where we get an interesting twist on the now tired cliché of Decepticon’s trying to overthrow their boss. We’ve talked before about how Soundwave very much doesn’t want the top job as he knows it’s just painting a big target on your back, but Starscream has him over a barrel thanks to knowing about his double agent status. 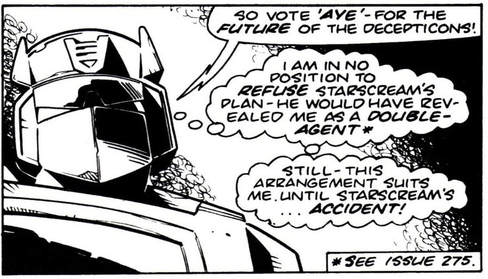 Amazingly this cuts away before Starscream can say "The Ayes have it!"
So the two local groups of Decepticons team up, united under the joint leadership of Starscream and Soundwave with each keeping a very leery eye on the other. This new status quo has all sorts of potential that, sadly, the British stories won’t quite last long enough to see fulfilled and helps to add a fresh feeling to the strip in its dying days.

On the way to do his Clegg/Cameron with Soundwave, Starscream also puts in an anonymous phone call in to Earthforce so as to get his formers bosses into even more trouble.

So, like, Eathforce have a phone line? Is it an 0800 number or premium? Wouldn’t it make more sense for them to have seen this on the news instead? Or were they just too entranced by Bob Hoskins? “When I want to chat to me old mucker Laserbeak I get on the blower. It’s good to squawk”.

Either way, we get a nice wry finale of the Autobots walking in Memphis and Megs and Shocks finding out they’ve been deposed when they try and call for hope. Which doesn’t outrage or even especially surprise them, instead they agree to team up with Megatron noting that the problem with being Decepticons is you never know who to trust, with a smile that suggests he’s rather enjoying this.

This is tremendous fun, with some great energetic art from Simon Coleby that makes for a nice strong start for the final thrust of the series.

I did you know.
Transformation (using an image of sneaky Soundwave from two weeks ago) is really keen to emphasise we’re on the home straight of the crossover whilst giving us a “STOP PRESS” making a fuss of Earthforce and the Survivors teaming up against Shockwave and Megatron (in fact, all the Survivors will contribute is filling out crowd scenes) and the return from the dead of a certain Autobot.

AtoZ covers Smokescreen and Snarl, whilst Combat Colin defeats Mega Brain by pointing out the readers and using the brief confusion caused by being stared at by tens of thousands of eyes to punch him out of the comic. You do have to wonder how Mega Brain forgot he was in a comic when it was a key part of his verbal smackdown last week, but as you get a neat cut out “I helped Combat Colin defeat Mega Brain!” badge I’m not going to complain. Nor think about the question posed under the strip about how Combat Colin got a black eye n his space helmet.

We get a recurring Dreadwind Fails to Answer Questions Properly! as Lance Geiles of Bromley (another very long term reader) asks what Omega Supreme, Hound and Sky Lynx are up to and just gets a “They’re all out there somewhere” rather than “Two of them are dead”. Did no one actually notice Omega Supreme go ZZZZZZZAAAAP back in Dark Star? 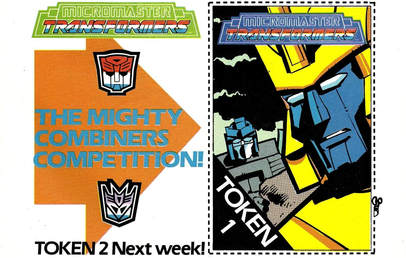 Mighty!
The concluding part of Cold Snap sees the riots in Frusenland persuade the government to take up Terrordromes from Cobra and the Blind Master befriend a kid who tries to pickpocket him. Which just looks creepy more than anything, especially as he hires the boy to be his “Employee” and cheerfully walks off with him.

The truly weird thing though is a strange angry rant from Storm Shadow about how the true purpose of mastering martial arts is not to be violent whilst the art focuses on the poster of a film called Karate Killer. If Hama was really that angry about misrepresentation of ninjas in media he’s not helped by writing years of comics of ninjas being incredibly violent.

More excitingly is the first token for the Micromaster competition. Unlike the Indiana Jones ones from a few weeks ago this is massive and there’s only going to be two that you need to enter before main competition starts in issue 279.

Next week, a house warming party! 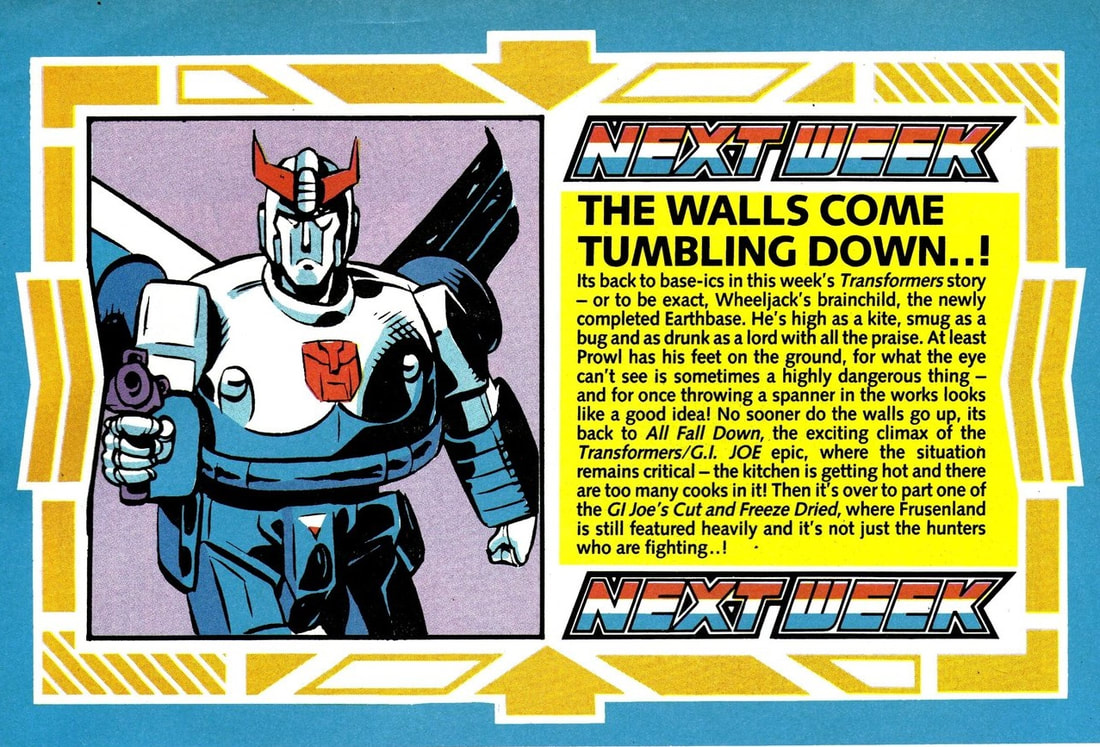