Pretty Fly For a White Guy. 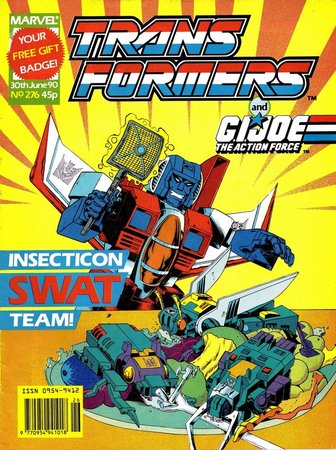 
Yep, should be interesting, eh? Now—buzz off!


*Right till the end, the UK gets the title wrong.


I’d approached this issue with a certain sense of dread. One thing that’s repeatedly come up in the comments during my journey through Earthforce is that this week’s British story is seen as pretty much Exhibit A in “The black and white comedy stories were terrible” arguments. A weak one gag groaner that’s a waste of five pages. A view that’s rather reinforced by the cover of Starscream about to swat the Insecticons SWAT team. Because there are two meanings of the word swat. HAHAHA.

Starscream is also pulling the most bizarre of faces as well. As if artist Pete Knifton didn’t quite know how to make it dramatic.

Oh, and of course, it ruins the punchline of the strip as well.

The only images you need from this comic.
Before that though, we have conclusion of the third part of the endless G.I. Joe crossover. Which actually has one decent (intentional) gag, as the Joes succeed in getting Bumblebee’s brain back online, resulting in him bemoaning his aching head before realising he has no head. He also helps bring the various plot strands together by explaining his good intentions and sending the Joes off to the Ark. Good old Bumblebee, cutting to the chase.

Sadly we then have to waste some time on Hawk confronting Barbara. Which is basically a page of him going to her apartment, demanding answers and then storming off with a “I don’t want to hear it!” before she can answer. For some reason he is also winking at her as he shouts at her. It actually looks worryingly like his sex face.

Of course, being a committed military commander at a time of crisis, his response to all this is to go home and get pissed.

Back at the actual plot, Serpentor (who in one panel has his eyes rolled up into his head in what is totally his sex face) uses a handy “Bugger up Transformers” button on his plane’s console to mess up Dirge’s targeting and make him explode. Obviously something so tremendously helpful will never be mentioned again (though amazingly the American comic would remember not to feature Dirge after this). Still, it convinces Omega Supreme of Cobra’s good intentions and allows for them to make an alliance.

Which is actually one of the stronger aspects of this story. Most comic crossovers do the “First the heroes fight, then they team up” thing, but it’s an added bit of spice to the mix to have one of the regular villains join the fray as well.

Which is lucky, because over at the Decepticon base, Dr. Mindbender is rudely awoken by...

No, wait, what? Why do the Decepticons have a human bed at their base? Why does Mindbender take his vest off to sleep, but not his leather gloves or purple trousers? And he’s definitely pulling his sex face as he watches Power Station Alpha launch on the human scale computer monitor that the Decepticons would obviously have.

I guess it turns out that Shockwave didn’t need the McGuffin from the Ark after all as well.

With a message from Mindbender (probably sent on the human scale radio kindly given to him by the Decepticons) reaching the Ark at the same time as the Joes, the stage is set for a three way team up to save the world.

Or at least to pull some really odd faces.

Apart from the Hawk stuff this was actually fairly solid, with some good gags and well played machinations by Cobra. And oddly Mindbender will get even more naked come the Generation 2 crossover. 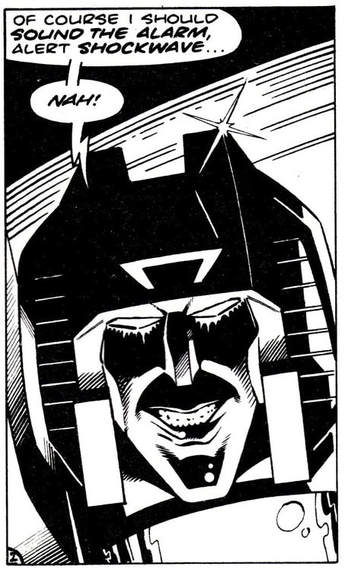 Starscream: The only character in Transformers who knows he's in a comic.
British story Bugged! is probably most interesting for the fact Furman (for the last time) is adapting elements from his American work. Whether he was still vaguely hoping to make the continuity match at this point or just liked the idea of sneaky Starscream is hard to tell. This issue came out between the American release of Eye of the Storm! And The Price of Life! and so was probably written concurrently with him having Shockwave reveal himself to Starscream but before he firmly knew exactly where that story was going to end up.

So in their undersea base Starscream is frustrated that after initially being promised great things when he was offered the chance to team up against Scorponok...err...Megatron, he is now relegated to simple guard duty. Interestingly, his security monitors show either Rumble or Frenzy (ah, black and white kills that argument) has turned on Soundwave and is on Team Shockwave.

Before he can put in a claim on a flat cap and torch, Starscream notices the Insecticons have infiltrated the base in their tiny modes. And as he’s cheesed off with the boss, he decides to deal with it more personally than sounding the alarm by instead running down for a quick chat after a detour to the armoury.

Meanwhile the Insecticons are doing their homage to the film (indeed, the panel looks like Anderson copied it directly from putting the tape on pause) by chewing through the wall into Shockwave’s war room. Which is presumably the place with the moody lighting and little models we’ll be seeing in the American series.

In terms of influences, it might also be worth noting that the use of the Insecticons, in particular Bombshell making a thing of his cerebro shells as a weapon against Starscream, may well have been influenced by the early instalments of the Joe crossover reminding Furman of their existence. 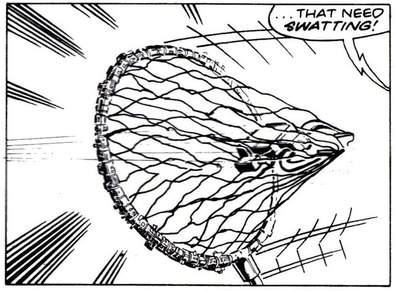 How many readers were cock-a-hoop at this?
All of which leads us to the moment I mentioned at the top of the page that so irritates fans. Starscream defeats the Insecticons by getting out a fly swatter. Sorry, I mean a rustbug hoop. To be fair it does seem to be electrified so it’s not quite as ridiculously easy as it might seem, but it still bolls down to three crack commandos—one of whom can shoot lightening—being defeated by a succession of light slaps. The end result of which is them being so embarrassed they agree to help Starscream set up Megatron by telling their leader exactly where Shockwave will be the next day.

I must admit to not minding this. It’s not great comedy and unusually for this era the gag is rather drawn out. But it’s nice to see Starscream (basically absent from the comic bar a brief cameo since before Christmas) having a ball and being incredibly sarcastic. Indeed, as he opens the issue talking to the reader much as he did in that last British appearance it can be seen as a direct sequel. It’ll never go down as one of the greats, but it is fairly harmless and Jeff Anderson does good work on the art as always.

Just as long as they never run only half a story in the Specials again.
The big thing on Transformation is the sidebar finally catching up with something readers would have known for a while: Collected Comics 16 not containing the next three parts of Target: 2006. The masters were lost in the post right before printing and—unless they turn up—that means that part of the story will likely never see print again! So the question is put to readers: Pick up on the next chunk of issues in CC 17 with a recap of the missing parts, or move on to something like In the National Interest. The statement then ends on an enigmatic warning about avoiding delivery services that specialise in transporting tortoises. Which is presumably a reference to some now long forgotten advert.

With that being the main focus, there’s little room for promotion of the new Death’s Head graphic novel being serialised in Strip from issue 13 and an attempt to drum up interest in the cover mounted badge (sadly missing from my copy) and the forthcoming Micromaster competition that ends with “Enough of this gay banter”. Which, after the shagpile carpet last week, I’m sure was entirely deliberate.

Combat Colin attempts to defeat Mega Brain with an insult battle, and though Colin initially does quite well (“You’ve got no nose, it’s your foot that smells!”), Mega-Brain wins with the cruel “You might have your own comic, but it’s only a back up in a toy robot comic!” and “If you were really funny, you’d have your own comic!”. Which lays Combat Colin out with an “Ouch, that hurts”. Allowing Mega-Brain to head to the Combat Rocket, but not before mind-controlling Steve and the Gigglys to destroy Colin!

This may well be the most dramatic strip of the week.

Dreadwind gets something we’ve not seen in the comic for a while: A bragging list, as David Futers of Blaydon writes in to boast of having over 200 Transformers. Which so impresses the Decepticon he gives a serious answer as to why Shockwave’s first appearance is different in AtoZ compared to Transformers Universe. 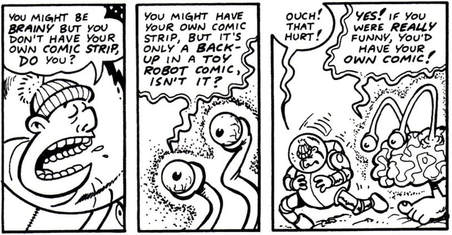 The cruellest cut of all.
There’s also a letter from Decepticon Bonjax Taachner. Who gets bonus points for using the double vowel naming convention Furman likes and has used for Cybertronians like Xaaron. He also brings up the touchy subject of Collected Comics. Dreadwind suggests he try Earthen newsagents in the ones in Polyhex aren’t stocking them. Finally we get a letter from 18 year old B. Andrews of Rayleigh that’s just nice and complimentary about the comic. Much to Dreadwind’s shock.

AtoZ covers Slingshot and Sludge whilst in G.I. Joe Cobra turn out a technobabble system to make the people of the country they want to sell Terrordromes to extra aggressive. What’s interesting though is the talk about how all of this is down to technology taken from a dead Eskimo. A reference to an extremely old Joe plot (I suspect a “See Issue” box has been removed) that no one in the UK would be familiar with and thus would have been very confusing.

Next week, Megatron and Shockwave take a flight of fancy. 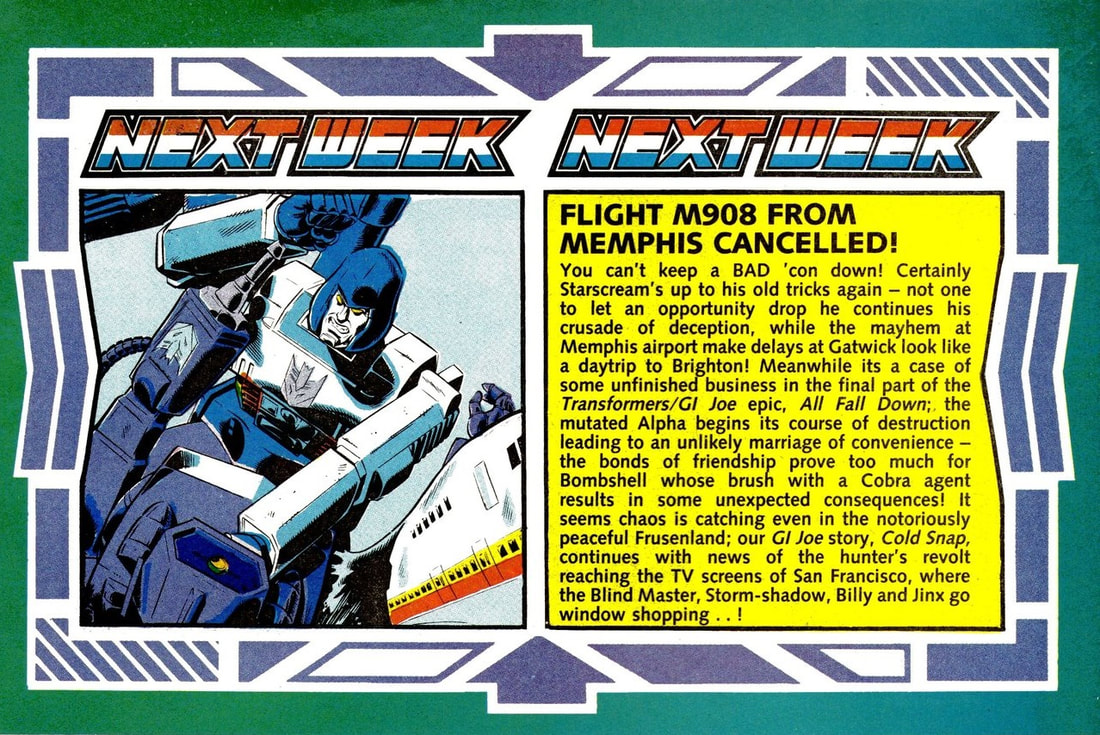