I Will Take the World in Vengeance by Your Honour. 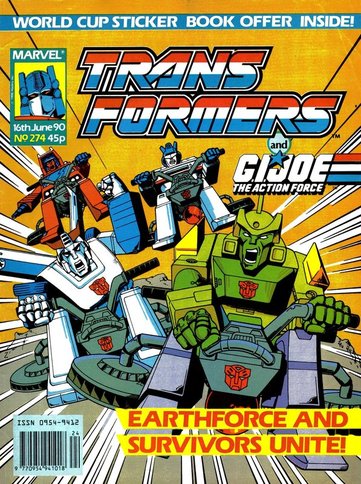 
*The UK changes the title to Ashes to Ashes for the second part, but we’ll stick to the original so as not to confuse things.


Happy pre-TFNation weekend! I Hope everyone reading this who is going will come say hi, you don’t even have to buy a book! I’ll be propping up the bar for most of the three days, talking toot and trying to decide on whether to go mad and have the infamous fish finger sandwich.

Slightly odd cover from Peter Ventures (of whom Transformation is very excited about their move to doing pencils) this week. Not that there’s anything wrong with it’s image of the combined Wreckers/Survivors task force flying into battle, it just seems a strange choice considering the Carnivac focus of this trilogy and the previous two covers. Unless they were keen to keep Carnivac not being dead a surprise? 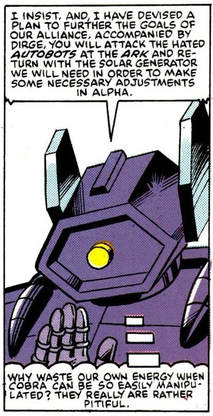 Mainly sharing this to show Trimpe is really going to town on having Shockwave's hand waving about to show expression.
The second part of what I’m stubbornly calling Ashes. Ashes... picks up where the first ended, with Shockwave sending Cobra to attack the Ark and steal the solar generator they need to get Power Station Alpha working. Which seems rather self defeating, both in terms of needing a generator to get what is basically a generator working and needing a new McGuffin for their first McGuffin. Plus, could the Decepticons not rustle up their own solar generator?

Shockwave is mainly concerned with getting Cobra out of the way and isn’t too bothered if they’re killed (which at least Serpentor realises and has the sense to leave Mindbender being to exact bare chested revenge if things go wrong), but it’s also clear they do actually need the generator.

All of which is just largely an excuse to pad out a page by rerunning Prime’s funeral (see issue 109), which at least firmly places this after Megatron’s “Death” as well now, despite the otherwise fastidious continuity of the comic not having mentioned it.

Meanwhile, Blackrock is visiting the Joes and explaining about the robots thing. Which they find had to believe despite his amazingly trimmed moustache. Luckily Crank Case is on hand to explain that as a robot, Bumblebee can be put back together. Which is odd, as I’m pretty sure Blackrock was surprised when he met Goldbug for the first time (which is after this, but which we saw three years ago), maybe he forgot all this like he did the having worked on Power Station Alpha thing? 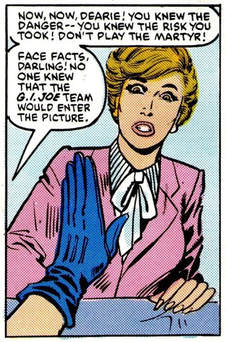 "No one knew GI Joe would enter the picture! They just turned up! No one invited them! Happens all the time with military units!"
The remaining three pages are given over to Anthony’s operation—complete with a very meta “Who cares about the plot?” comment from his mother—and the deeply exciting love life of Hawk! Who has been summoned to the Pentagon and is psyched because Barbara lives in Washington and she “Stirs something in me. Something I haven’t felt in years!”, you dirty dog you Hawk.

But, in a twist worthy of any bad American soap opera (which, to be fair, means it fits in with the Larry Hama style), Barbara goes for lunch with the Baroness! She was in league with the villains all along! Though there’s a half arsed attempt to make her a tormented character who only wanted to do her best it falls flat considering she wanted Power Station Alpha destroyed because she knew it was a clusterfuck and didn’t want her career harmed. Charming. She doesn’t even pay for lunch.

The exciting cliff-hanger is the FBI are watching her. Today she’d probably be Vice President.

One final thought on this rather mediocre collection of barely connected scenes: Is the acronym for Power Station Alpha being PSA a deliberate nod at those “Now you know” messages that ended the Joe cartoon? Or just a coincidence a desperate man with nothing good to say is pouncing on? 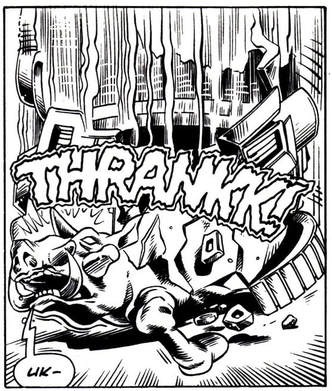 A crushing blow for Snarler.
It’s very much once again the case the British story is where it’s at this week. Where Wolf? (presumably this was only a three parter because Furman run of feral canine puns. If only he’s thought to have Carnivac become a resident of a south-eastern American state and found an ineffectual tunnel of fear fairground ride in a story called Who’s Afraid of Virginia Wolf?) wraps up the longest storyline of this era (so long it started in colour!) with some real style.

After how languid the lead story continues to be, it’s the pace that most impresses. Four panels are spent at the Earthforce base establishing Grimlock has been reluctantly persuaded to send a team with Springer and company to rescue Carnivac after Prowl points out these are potential extra troops. Despite the brevity, it manages to get both humour (his resigned hands on cheeks slouch) and drama (the segue into the Decepticon base being a stark declaration that Carnivac is going to be already dead) into Grimlock’s final panel.

At the base, though it’s not revealed till the climax of the issue, Carnivac is indeed still alive and starting to pick off the Mayhems one by one like some sort of Jason Voorhees. Starting with Snarler, who is initially smug about having defeated the traitor before realising the wreckage of his body is just...

Oh no! Someone (it’s Carnivac) smashes a great big weight on him destroying his body and killing Snarler before he can voice his thoughts.

On the beach, we get a lovely sequence with the other Pretenders where Bludgeon is enraged that Carnivac didn’t get to go down fighting like a true warrior. Meaning he’s delighted when the Survivors/Earthforce team show up looking for a Barney as it’ll let him vent his frustrations. This (along with the mystical stuff last week) more than anything we’ve yet seen of him solidifies his character as we’ll be seeing it when the American stories resume. 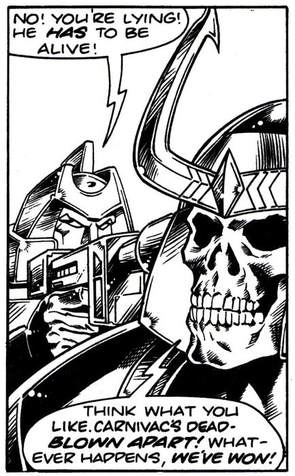 "Now I'm off to be in the new He-Man film"
Spinister on the other is quite happy to have sorted out Carnivac so easily and is equally happy to leave and let his so called colleagues have their glorious fight to the death before... Someone (it’s Carnivac) shoots him full on in the chest.

Considering how careful this story is to leave the other characters we’ll be seeing in the American stories alive (Snarler, for example, won’t be coloured by Yomtov again), it’s perhaps surprising Furman cheerfully offs both Spinister and Needlenose when they’ll be showing up under Thunderwing. True, they could be fixed, but that would rob this story of a lot of its power.

The fight on the beach is very well done by the on fine form Jeff Anderson. Again, length means it has to be done through a series of quick posed panels, but every one is nicely done from Skids jumping at Octopunch through Stranglehold macing Slag. But it ends with the Autobots victorious and Springer with a gun against Bludgeon’s head as the will to use it after finding out Carnivac is dead.

Which is when Someone... Oh hey, it’s Carnivac! Turns out his shell was empty all along. Shame there weren’t any Pretenders on the Mayhems who would have known about this handy feature. Despite this bit of fudging, the ending is very strong as Carnivac stays Springer’s hand, telling him to take the survivors of The Survivors prisoner. Not—as Prowl thinks—out of Autobot mercy. Not even because he knows these guys need to be in the American stories. But because he knows a Warriors Death is exactly what Bludgeon wants and he refuses to give it to them. Because he’s still an evil ‘Con at heart.

This has been an amazing arc showing Furman at his best on the black and white format. Sharp, fast paced and even avoid that biggest of pitfalls his writing can fall into: Failing to payoff long running plots well. Throw in Jeff Anderson having an absolute blast and it’s easy to see why these stories got the colour treatment in the final Annual. 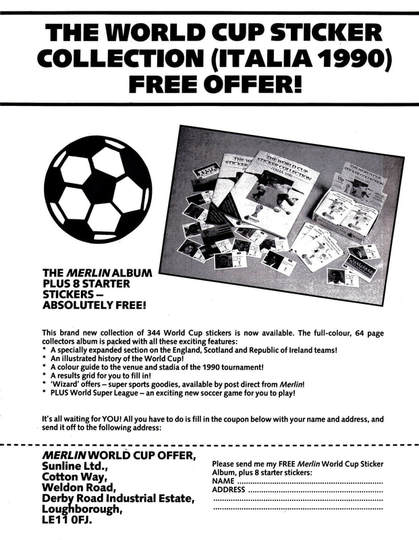 SPOILER: England didn't win it.
Transformation is deeply excited about only one thing: The return of the text on the Next Week box. I know pickings have been a bit slim lately, but devoting the sidebar to that seems rather over the top.

“Over the top” can also describe the conclusion of The Day the Giggling Stopped! In the surreal landscape (with more Prisoner imagery) Colin works out the entire thing is just a mass hallucination and used the handy Weirdility Nullifier he happens to have invented last week to reset everything. With Colin then suggesting that Steve was so good at thinking he was a carrot he should take up method acting.

Rushing to the Combat Shed (past ads for a film staring D.J. Yampy, the Amazing Dave’s sold out magic show and a general “Transformers is Triff”) to use the Combat Scanner and find out where the weirdness is coming from leads them to detect it originates from Mars (Big red planet up in space). Meaning the Brain must be alive! Colin’s sarcastic comment on the inability of Marvel villains to stay dead is especially funny two pages after Spinister. This means they’re going back to Mars! And in a joke the Red Dwarf episode Lemons would later do with India the story ends with Steve saying Mars is in the opposite direction to that which Colin is heroically pointing in.

Not how its possible to get a longer piece out of discussing the one page comedy strip than it is the lead story. Lew Stringer is a bloody genius.

Hi-Test actually gets a letter! From the incredibly enthusiastic Craig Philips of Sawtry. He used to get Ghostbusters, but he loves the robots now and is especially keen for the comic to properly advertise the Collected Comics because he’s trying to collect Target: 2006.

Hi-Test assures him Collected Comics 16 was out last month and he hopes Craig didn’t miss it.

You do wonder when the comic itself will be addressing that elephant in the room... 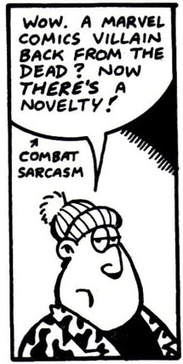 Now that's meta.
John McLoughlin of Clondalkin smugly writes in to say he has proof of the existence of Transformers: The Movie 2. Dreadwind equally smugly replies that this is a pricelist of comics and what is actually being referred to is the second issue of the adaptation of the first film. Though he also again claims this was a four issue series, so he’s not allowed to be that smug.

As well an a coupon to send off for the Italia ’90 World Cup sticker album, our second dose of G.I. Joe: The Action Force (Cold Snap from Joe issue 67) is also full of manly tears as the Madeupcommieland survivors return to the Pit after five months that feel like ten years. They immediately pal again with Outback and reassure him he made the right choice to follow orders and Jesus, didn’t the comic promise us this storyline was over?

The Next Week page is also disproportionately pleased with the return of the Next Week page. Are there really no other highlights left for this comic? Find out next week as Megatron is betrayed! 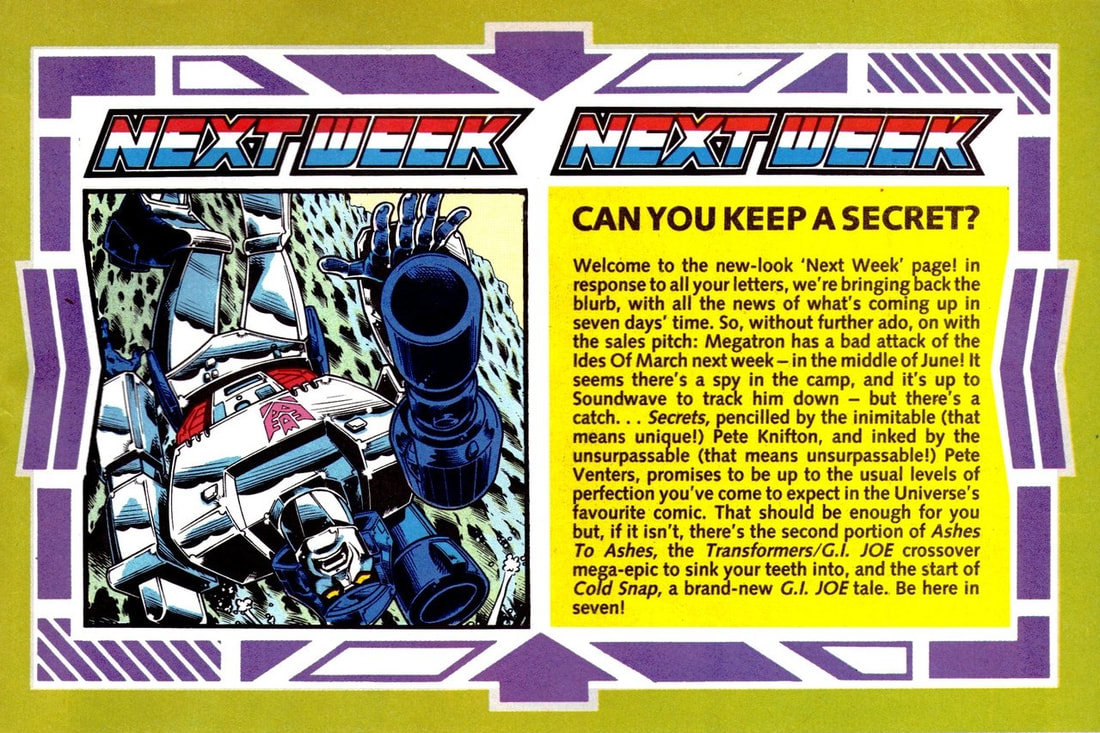