Everybody Was Kung-Fu Fighting. 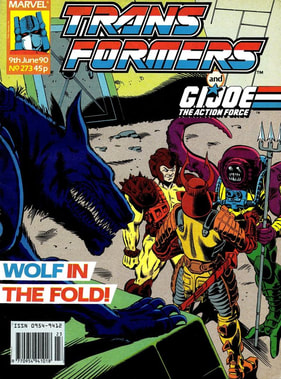 
Even these fleshlings display their incredible stupidity!


Stewart Johnson gives us a lovely cover this week, mainly for the fantastic expressions on the three characters whose faces we can see. Carnivac’s rage as he watches from above; Stranglehold’s slyness and Octopunch’s sheer boogly “What the fuuuuuuuuuuck” look are all perfectly pulled off.

And it must take some talent to be able to give a diving bell some emotion.

Of course, the thought of more of That Bloody Crossover makes me go pretty boogly eyed as well, so I sympathise. 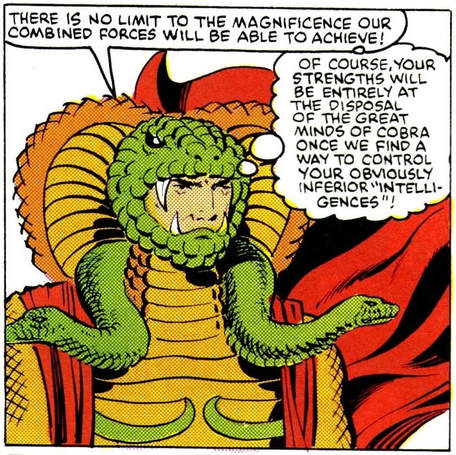 "I throw snakes. You can't beat that"
The first thing to notice about the opening of Ashes. Ashes... is that the UK have badly mangled the splash page. We’re used to them looking slightly shrunk for the format, but for some reason two massive, massive Transformers and G.I. Joe: The Action Force (plus a new version of the opening “Scenario: The end of the world!” line) logos have been slapped on the top to take up a quarter of the space and reduce the art more than usual. At first I thought they’d replaced the story title for some reason, but that’s actually over the page, so it’s a bit of a mystery.

The story itself three pages—including a double page spread—are given over to a Shockwave computer simulation of Power Station Alpha sucking Earth dry from various locations. This might seem rather a waste of space considering it’s exactly the same information Shockwave conveyed via one very packed exposition panel last week. However, showing is always better than telling and there’s some memorable imagery here as it looms over a hammerhead shark or makes a foreboding shadow in the arctic.

Shockwave spends the fourth page delivering more exposition, leaving just one page for the arrival of Cobra and the real station. There’s some nice comedy here as Shockwave (who talks about Megatron in the past tense, so he must have gone by now) and Serpentor and Mindbender all play polite whilst thinking what useless dicks the other side is.

However, we’re now past the halfway point of this series and the two groups of villains are only just aligning themselves. And indeed, the two groups of heroes still have to be formally introduced. That feels very slow for nine weeks worth of story and means this remains deeply frustrating despite it being the most solid part to date. 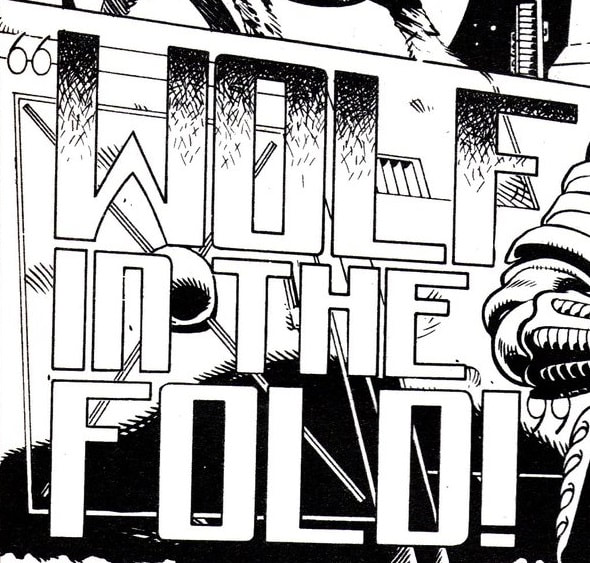 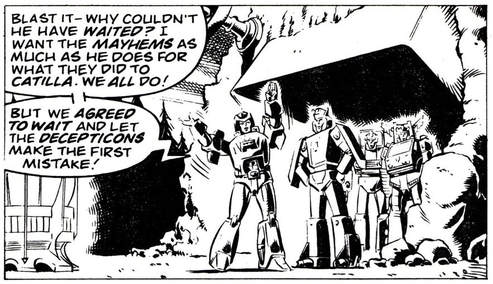 Jazz hands Springer.
Luckily the UK story is not messing about. Wolf in the Fold is split evenly between two narratives. The B plot of Springer and Broadside arguing over Carnivac and whether to go after him seems on the surface to be covering old ground we’ve seen once too often before.

However, there’s a nice twist here as it’s not simply a case of our heroes arguing over if they’re going to be heroic or not. They’re convinced the Mayhems will be too much for the Survivors alone and that means getting help from Grimlock. Which creates the amusing idea that Springer has known about Earthforce all along, but would rather live in a cave rather than hang around with Grimlock. The issue then becomes: Can they count on Earthforce to help an ex-Decepticon?

The A-plot sees Carnivac stalking the Mayhems to pick out the best possible target. Which is both a nice effective way of not making him seem either an idiot or a ridiculously overpowered character. He needs someone alone, and a meditating Bludgeon looks to be the perfect choice...

But the Master of Metallikato can not be snuck up on! Which would be impressive if Carnivac’s musings on attacking him had been entirely in thought bubbles, rather than starting with him talking out loud. However, the resulting fight may be brief but it’s effective and sharp as the emotions over Catilla boil to the surface. 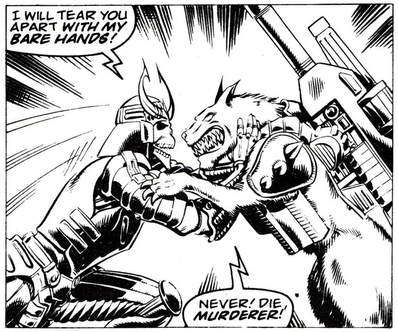 Bludgeon becomes one of the few characters who can quote that line without suffering an ironic fate.
Pleasingly Bludgeon is not an unstoppable ninja force of nature as if he was a Larry Hama character. Instead the fight is more of a stalemate, with Carnivac only fleeing as reinforcements arrive. Of course, him being out of sight just long enough to have Pulled Something Off is suspicious, but the nice moment here is Spinister having had enough of Bludgeon’s warrior crap and just shoots Carnivac with his Great Big Gun, seemingly making him explode.
This continues the strong run of this arc and, coupled with some more great art from Staz, is almost enough to counter the lethargy of the opening story.

Almost.
Transformation is mainly concerned with things that are about to happen. This not only includes the Micromaster Combiner Base competition we’ve already been told about, but also the return of the text based Next Week box next week. Heady times indeed. We’re also told that the comic has been receiving complaints about people with published letters not getting their toys. To which the response is basically “Hasbro sort that out, moan to them about it”. 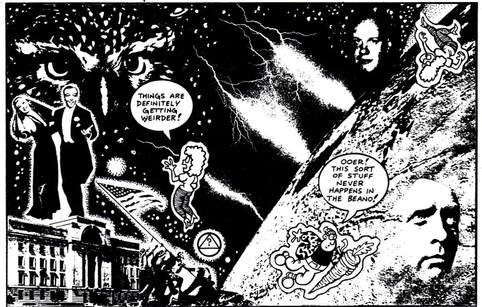 It's been a Combat Colin sort of a week.
AtoZ covers Skywarp and Snarl, whilst Combat Colin (more on him in a second) sees things get strange as Steve seems determined to kill Julie with the Combat Cannon before—presumably in a homage to the most famous episode of Lost in Space—turning into a carrot. Which is then followed by the background becoming a surrealistic photo-montage (including, of course, Patrick McGoohan). Which is a wonderful stylistic departure for the series and has more panache on display than every page in the lead strip put together.

Dread Tidings only has two letters this week, thanks to a very long one from Mark Packer of Farham mainly given over to praising the idea of a Death’s Head graphic novel (though there’s also space for him to say he prefers his own Unicron origin he gave in Grim Grams way back in issue 147), which lets Dreadwind reveal the graphic novel will be serialised in Strip at the same time as its main publication.

The Tenth Letter—and the Madeupcommieland plot—ends with our heroes escaping by shooting over the border in the White Clown’s human cannon. Which feels a little childish considering how serious and dark this story has been (and continues to be, Stalker kills the prison warden in a shooting duel), but there has been some good stuff here, even if it has been rather drawn out.

Speaking of the good stuff though, to celebrate getting halfway through that bloody crossover, click below for a special Addendum looking at the real hero of the book at the moment.