When I Needed a Neighbour, Were You There? 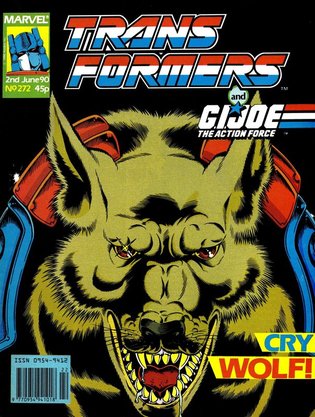 
I guess this sets my mind at ease!


For those of you still following the Hachette partwork, I’m going to open with a word of warning about the 16th issue that’s just come out, it inadvertently uses a few pages of Pat Lee art from issue 15 rather than the actual contents. The fact this went unnoticed by the work experience kid they use to copy edit the books is probably pretty insulting to Livio Ramondelli. There’s no word yet on how this will be dealt with (or even acknowledgement of the issue), but if you’re interested in the Primacy volume, it might be better to hold off for a time.

And speaking of a book series where the pages are sometimes in the wrong order (though rest assured, if the publisher—me—could sack the final proof reader—me—he would. But we’re joined at the hip), Transformation Volume 2 is now out on Lulu! Buy HERE (and check the main page of their website for whatever discount codes they’re doing at the moment). Amazon and the rest will follow soon. Don’t forget it’s your last chance to get a copy in person at TFNation as well, read about it HERE. 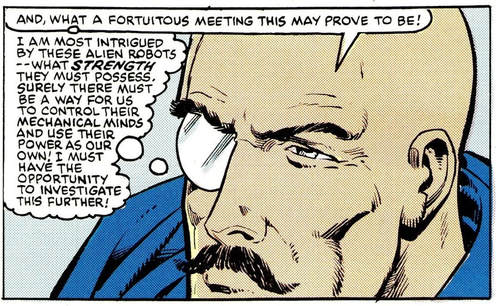 Look at that lovely 'tache.
The concluding part of Power Struggle features the most amazing and extraordinary breaking of/ the format we’ve yet seen: Transformers in Transformers! Hold on to your hat Alice, we’re going down the rabbit hole. Admittedly it’s still mainly Joe focused, but I’ll take what I can get.

The main thrust of this part is about making alliances. The first comes from Joes boarding the cruise ship Blackrock is on and of course, with him having worked on Power Station Alpha, he approaches them to say he recognised the stolen vehicle and...

No wait, he overhears the two prattling on about Transforming robots and that’s what perks his interest. Hmm.

The real fun comes from the second team-up and our old friend Dr. Mindbender. The most homoerotic character in the history of fiction is usually good value, and here it is fun as he casually reacts to Dirge and Bombshell arriving on Cobra Island and suggests a team up as if it’s the most normal thing in the world. He’s also genre savvy enough to know villain team-ups in comics never work and so plants a bug on Dirge to keep an eye on things.

All whilst supposed lead villain Serpentor just stands there like a Moomin. 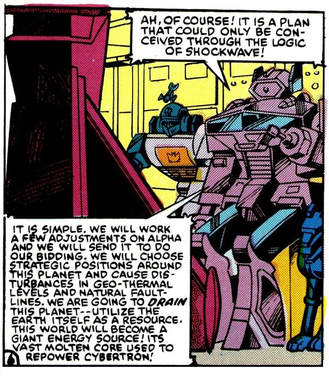 Simple.
Do we care about a cutaway to Mum of Anthony taking him to hospital and the Doctor finding the bug in his brain via x-ray and suggesting surgery?

Mindbender’s bug certainly gives him an earful as Shockwave (acting as de-facto leader, has he already got rid of Megatron?) is a robot not afraid to talk in ridiculously massive speech bubbles so as to fit all the exposition in on the last page of the comic. Even for him, it’s out of character and I’m not going to even try and quote it all. The gist though is that he’s going to use Power Station Alpha as a power station and...

Wait no. He’s going to use it to crack fault lines and drain the resultant energy and re-power Cybertron. Which as Mindbender notes with characteristic understatement will destroy the Earth!

What’s interesting here is that this is basically the same plan Galvatron had in the volcano storyline that the UK originally replaced this with. Sure the end goal is different (Shockwave doesn’t want to become a God, though to be fair he counters that with a bigger scale that just wrecking the West Coast), but it’s all about creating mass natural disasters as a means of collecting energy. Coincidence, or was Furman more inspired by this than just having to adapt the death of Bumblebee into his own work?

As for the story itself, Mindbender aside, blueeeuuughhhhhhhhhhhhhh. 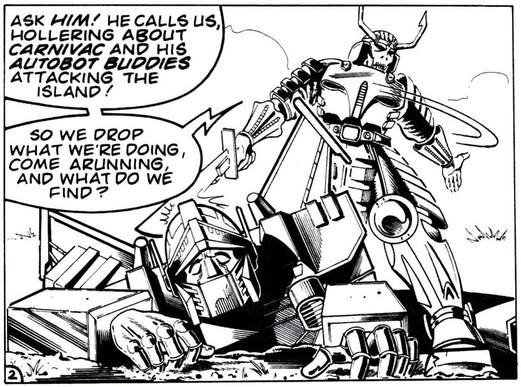 "And his nose is not a needle!"
It’s been seven months since the UK stories last touched base with the Carnivac/Survivors arc, and with the focus having shifted to Earthforce, readers could have been forgiven for assuming we were never going to see the wolf Pretender get his revenge. Especially with Furman’s form for fumbling the conclusions to his long running storylines (1989 Ultra Magnus says “Hi”).

However, and pleasingly for the final occasion the UK will do an arc connected to the colour era, Furman is pulling out all the stops on this three part story. The opening is almost entirely focused on the Mayhem Attack Squad, who haven’t been spreading much mayhem or attacking people since October thanks to their amazing plan to take out Carnivac: Retreat to a heavily fortified island and wait for him to make his move. This is such a drastic departure from their previous “Hunt down all traitors” policy it adds a nicely understated subtext to the story; for all they berate Neddlenose for his fears, his colleagues are at least mildly cautious about what’s being thrown at them.

Needlenose himself gives the story its title of Cry Wolf!, as we open on him having faked a Carnivac attack so as to time the response of the others. Which does not go well, especially with Bludgeon who considers “I’m a fellow Decepticon!” isn’t a good enough reason no to decapitate him for daring to test the effectiveness of a warrior.

Luckily the timely—if disdainful—arrival of Snarler and Spinister save him. Though neither is impressed by his claims Carnivac is just too good and they need to be more ready. Indeed, once alone Spinister makes it clear he’s had enough of his cowardly pal and regrets saving his life with a lie back in The Hunting Party, making it clear he’ll kill Neddlenose himself if this ever happens again. 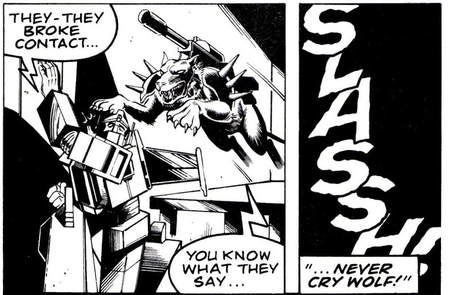 He may get better from this.
Which turns out not to be the worst part of Neddlenose’s day. As astute readers will have worked out from the story’s title, when he gets back to his quarters his finds a real wolf waiting for him, with the added twist of the knife being that Carnivac was able to get in thanks to the fake emergency distracting everyone. And this time the other Decepticons won’t respond to the intruder alert as they’re annoyed Neddlenose is pulling the same trick again so soon...

There’s some fantastic character work on everyone except Octopunch and Stranglehold here, with an amazing sense of foreboding that builds up to fantastic pissed off reveal of Carnivac and the final black panel that only has a “SLASH!” sound effect on it that feels like a dark inversion of the “Censored” one from Snow Fun! Though how lethal this is to Neddlenose depends on when you place the rest of Matrix Quest. The art team of Pete Knifton and Michael Eve (who gets a special shout out in Transformation) also knock it out the park for the second week in a row.

Transformation is again desperate to assure you that the Madeupcommieland Joe story is finally ending, and promises a mystery free gift on a forthcoming issue that will be followed by a new competition for Micromaster Combiners. 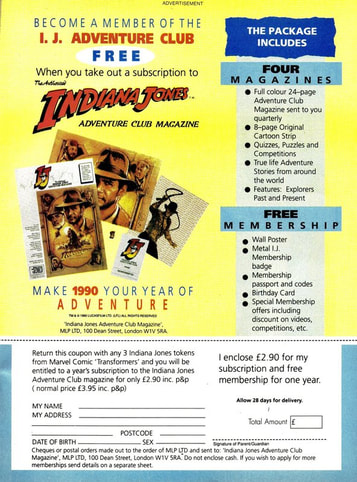 If adventure has a name...
Combat Colin begins a new epic with the shocking The Day the Giggling Stopped! Which, as the title suggests, sees the Giggly Sisters (who I think are named for the first time here as Julie and Joanne) having a lovely giggly walk through Wallytown when a mysterious beam from the sky hits Julie and sends her “Yampy”, kicking flowers, shouting “Boo” at little old ladies and—in the cliffhanger—trying to whack Semi-Automatic Steve with a lamp post. Whilst Stringer has played with evil versions of the regulars before, there’s enough fresh ideas in Julie’s rampage to keep this fresh and entertaining.

Dreadwind gives us an abundance of Dreadwind Fails to Answer Questions Properly! this month. Starting with telling Stephen Allen of Co. Antrim that Jetfire isn’t dead (he is). Then he assures Robin Leach of Sandy than Action Force will hopefully be getting a new solo comic around September (they won’t), and to put the cherry on the sundae of failure can’t tell Mark Beatley of Tallaght whether the Jumpstarters have ever been in the comic as he’s no idea who they are.

And Dreadwind has the cheek to be exasperated at having to keep answering the question as to why Rodimus didn’t turn back to Hot Rod when the Matrix was removed from him back in issue 254.

The third part of The Tenth Letter is probably the darkest we’ve seen G.I. Joe yet get, as Madeupcommie guards beat a prisoner to death before themselves being executed by the ninja team. Even a simple thing of Stalker visibly starving compared to previous issues adds a more serious tone that probably makes this one of the more memorable parts of the series.

But what’s really exciting is the full page for sending off your tokens for The Authentic Indiana Jones Adventure Club Magazine subscription. Which will lose you the first page of G.I. Joe: The Action Force on the other side, but there’s more than enough Joes in this comic as it is.

Next week, walkies. Plus a special addendum going back in time to a Combat Beginning. 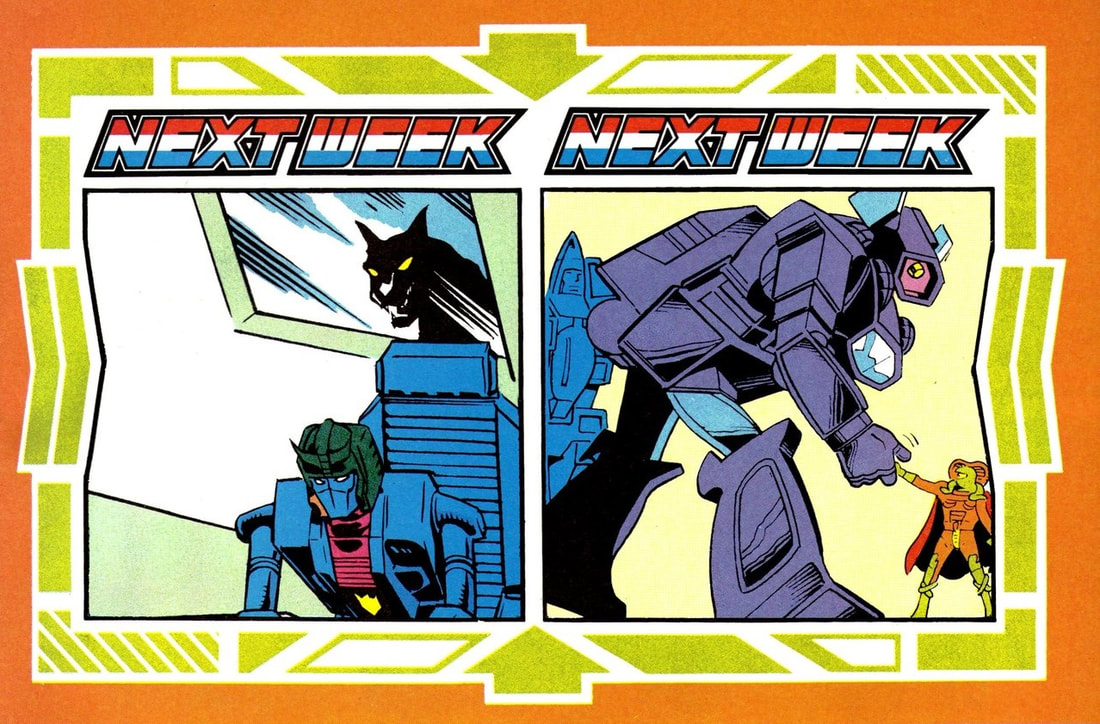