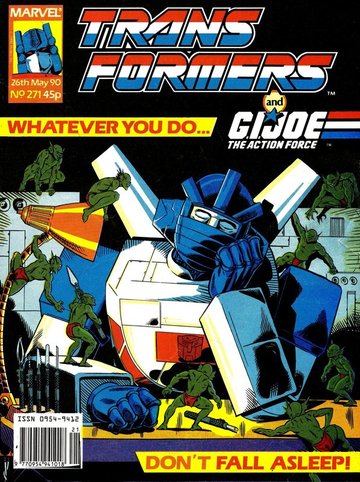 
I guess you could say we scared The Living Night-Lights out of him!


Ha, I bet you thought I’d go for a quote from A-ha for the title lyric didn’t you? Well sometimes I like to subvert your expectations, hence using The Lonely Islands “Do everything I say” song instead. What a twisty fellow I am.

Though yes, the title of the British story shows Furman’s love of Bond, including directly misquoting the second best title drop in all the films (behind how Brosnan manages to make “The World is not Enough” one word).

Before we delve into the issue (and to pad out what is going to be a very short piece), a reminded that people going to TFNation have just over a week to get their requests for a copy of The Book 2 in! Read more HERE. I’ll also be on the podcast panel on the Saturday at 4PM if anyone wants to see me make a special fool of myself.

For those not at the con, the final edits from the proof are done, so once I’ve checked a finished copy it should be on sale early in the week. 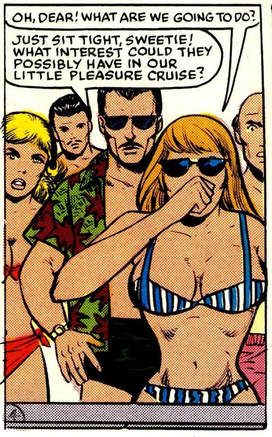 Thank God, a character from Transformers!
All of which is as good a way of any of avoiding getting into talking about Power Struggle Part 3. For the first time in the entire history of the comic, we have a Transformers strip that doesn’t have a single Transformer in it. If readers were going to give up on the book during this long slog through the crossover, this would be the point they would do so.

The closest you get to a robot is a (animation model faithful, so the Action Master?) toy of Bumblebee in the hands of young and still mind controlled into a stupor Anthony. As Transformers toys have appeared in the Joe comic before this is at least consistent, though it does mean Hasbro know more about the alien menace than the government do.

This sequence of Anthony staring off into the middle distance and ignoring his mother is actually quite creepy, but also not something that’s going to go anywhere. With his real function in the story now done and dusted, it would have made more sense for this kid to exit stage left and maybe give an actual Transformer some extra pages.

The rest of the issue is given over to a Joe/Cobra aerial dogfight to stop Power Station Alpha escaping that is stopped by Cobra threatening to blow up a cruise ship. Which by amazing coincidence has Tony Stark...no, wait, G.B. Blackrock aboard. In his short shorts and surrounded by bikini clad babes. Remember how in the first part it was said that Blackrock was involved in the creation of Alpha? Writer Higgins doesn’t as it won’t come up again. Still, a Cobra bailing out onto the ship gives him a chance to join the plot.

This is fairly appalling, incredibly dull stuff that may well mark the low point of the entire comic. To the point I’m actually wondering how I stuck with it at the time. 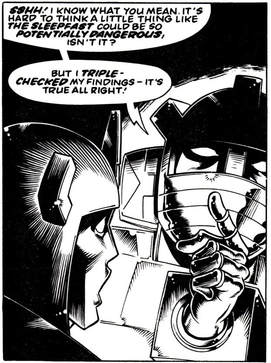 "you're my new best pal!"
The answer may be in the aforementioned Bond title aping British story. It’s another in the series of light comedic takes on Earthforce, but scores over the lead story by having a 300% increase in the presence of actual Transformers. Indeed, where else are you going to see Wheeljack and Snarl having an adventure?

Though it rather feels like a Combat Colin story where Colin, Steve and Professor Madprof have been replaced by Wheeljack, Snarl and the surprise villain.

This does at least mean it’s fun, as Wheeljack ropes Snarl into breaking into a warehouse where the new children’s toy craze of Sleepfast Nightlights are being made and stored. As demonstrated by the opening TV advert, this goblin looking thing is for lazy people, as once you’re in bed all you need to do is think to turn the light off.

Wheeljack has found out this is actually Cybertronian tec, and worse of all it will eventually control young minds. What’s fun here is that Wheeljack found all this out because he’s a mad scientist who loves to muck about investigating things for the sheer hell of it. Which may be the most Wheeljack thing ever.

It turns out the Nightlights are also mobile, swamping our two heroes and revealing the mystery Decepticon villain... Mindwipe! Which works much better than Galvatron having a similar scheme back in ...Perchance to Dream, as it both fits his skillset and he works better as a comedy character. 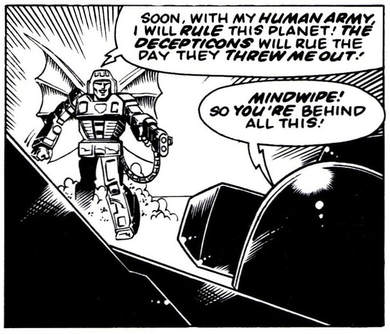 "I was expecting Galvatron"
It’s also the last time we see Furman trying out an idea for the American book on the British first. Mindwipe’s defection from Scorponok in Eye of the Storm! would be published in June, so this would have been written either at the same time or slightly in advance. Here Mindwipe was thrown out for trying to mesmerise Scorpy (in the only mention of him during Earthforce) and is now on his own to prove he can lead the Decepticons by taking over an army of children.

The joy here is just how scared he is, visibly shaking as he delivers his Supervillain Speech, showing just how much he isn’t cut out for this. It’s a fun moment for an underused fun character, and makes his defeat by Wheeljack and Snarl mentally turning on all the lights at once so as to “Overload his neural circuitry” feel appropriate rather than cheesy.

This is froth of the sort that can’t carry the weight of the issue, but it’s still a nice fun read with some strong art by John Marshall (with Baskerville on inks).

Transformation is once again keen to assure readers that the Madeupcommieland Joe story is ending and that next week sees the revenge of Carnivac. The big news though is that Jazz has been to an optician’s in Staines as part of a colouring competition. If any readers met Jazz that day, do let me know. 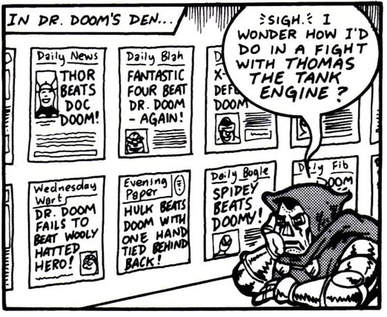 Wait till you see what you're like on film.
Combat Colin defeats Steamroller Man with a massive balloon of bubble gum, revealing the surprise villain is none other than... Dr. Doom! Who is so tired of losing to proper heroes, he thought he’d take on the useless British pair for a certain victory. His failure here means he ends the story sat in front of a wall covered in front pages showing his defeats (“Hulk beats Doom with one hand tied behind back!”) and wondering how he’ do against Thomas the Tank Engine.

Dreadwind (whose new toy has just been announced!) sees Neil Humphreys (aged 9) send in a letter written on his behalf by Dad (aged 39), asking why they don’t just print Action Force in black and white so that at least all the Transformers content could be in colour. Dreadwind agrees it’s a nice idea, but practicalities (you’d still have to pay for the British story to be in colour) makes it impossible.

The third Indiana Jones coupon means that poor old Barnaby Clements of Reading doesn’t get a reply to his nice letter about how the deal with the Mecannibals by feeding them a nice big thermo-nuclear bomb.

AtoZ covers Skydive and Sky Lynx, whose circus skills would have come in handy during the second part of G.I. Joe: The Action Force’s The Tenth Letter. Two pages are given over to the ninjas blowing their cover by standing around the circus tent giving a two page speech about some mystical bollocks. When the White Clown realises they’re imposters, will he turn them in as their raid on the gulag starts?


Next week, a wolf in the fold. 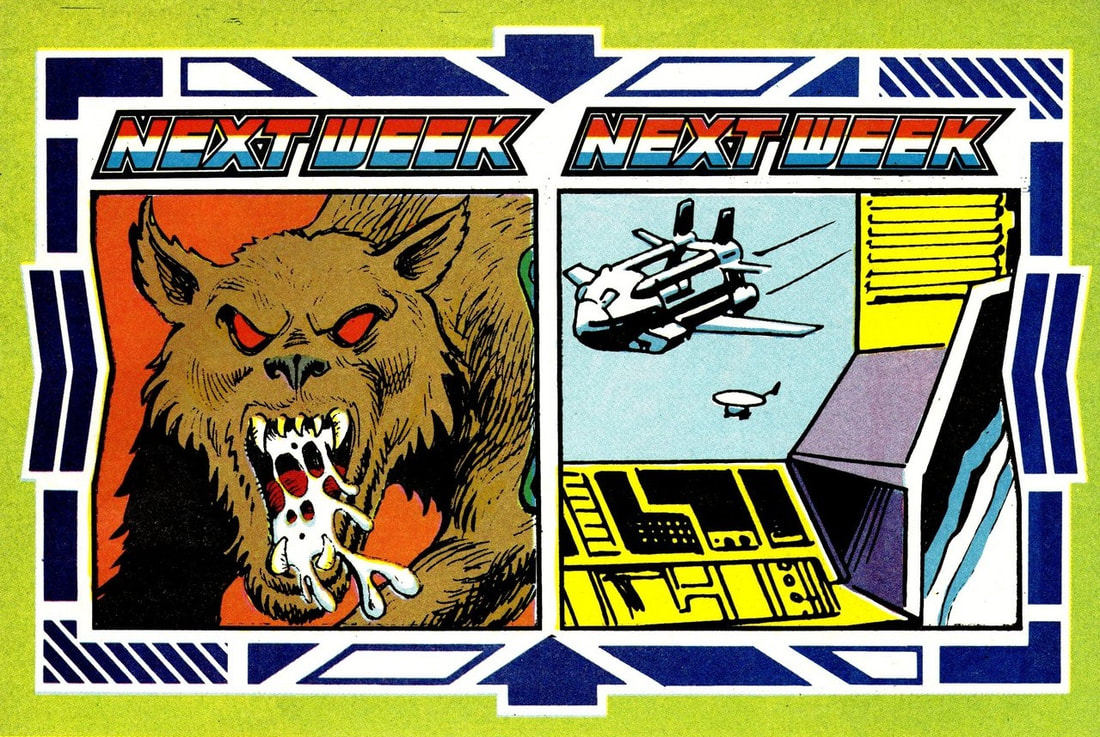