I Got a Lion in My Pocket and Baby He’s Ready to Roar. 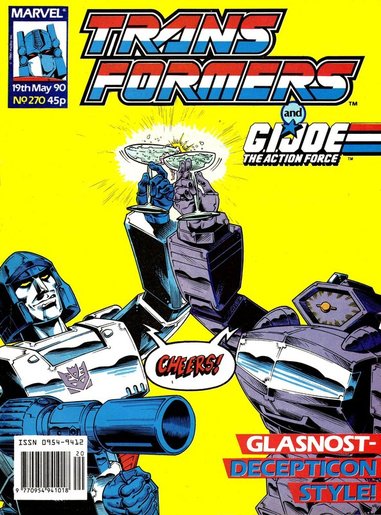 
That’s better. You wonder how they manage to hit us sometimes!


Some really exciting news to kick off with this week: Transformation Volume 2 is almost ready! The proof copy is wheeling its way to me right now! Once I’ve checked and approve it, it should be on sale formally through Lulu by this time next week. It takes a little longer to make its way down through to Amazon and the other online retailers, but everyone who wants one will be able to grab a copy by around the start of August.

And if you’re going to TFNation and want to buy one in person, read THIS post here.

[UPDATE! Between writing and posting this, the proof copy has arrived! How could you not want THIS?]

Of course, ideally, in order to make the book look more appealing to floating buyers, issue 270 would be a really strong one with lots to talk about on which to sell my writing. The “Glasnost—Decepticon style!” tag-line on the cover is certainly a nice and sophisticated joke that would have gone over the heads of most of the younger readers, which suggests we could be in for good things within the pages. Even if (as Tim Roll-Pickering pointed out on Twitter) it’s more technically détente, the sub-editor clearly decided the “Glass” pun worked better.

Though as Shockwave toasts his glass with Megatron you do have to wonder how he drinks. The answer of course (as suggested to me by Tom Prankerd) is that his so called gun arm is actually a giant straw. 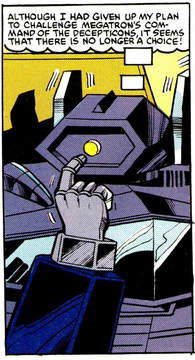 That's one in the eye for Shockwave.
Power Struggle Part 2 features exactly six panels of Transformers this week. All set in the Decepticons “New” island base and involving Shockwave, Ravage and a depressed Megatron talking about the death of Optimus Prime and how it has messed up the Decepticon leader. Whilst it’s nice to see American Ravage chatting away, it’s all a very old plot point that has nothing to do with the story at hand until Shockwave activates Bombshell’s cerebro shell and takes over Power Station Alpha.

The human side of the plot is split into three sections. The first sees the Joes confused about the whole giant robots things (though Main Frame is clearly a closet fan as he proclaims “There’s more to this picture than meets the eye”) whilst looking at the parts of Bumblebee. Sgt. Slaughter actually gets to be sensible for once as he points out he thinks Superion was holding back, but otherwise this is just a transition page.

Hawk meanwhile goes to see Senator Larkin, who he finds so “perfic’” that he accepts her invitation in for a drink. The next time we see them he’s on top of her and she’s proclaiming “Hunh?? Wh-what was that?”, but as this is the same moment the controlled Power Station Alpha blasts off, shaking her apartment, it’s hard to be sure if she’s reacting to that or whatever Hawk is doing off-panel. 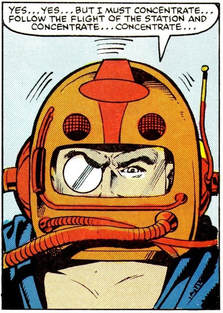 Mind-blown.
Sadly the interruption means we don’t get to see if Hawk likes to shout “Yo Joe!” at a crucial moment.

The only really entertaining moment in the whole story is on Cobra Island, where Dr. Mindbender puts on a ridiculous electronic helmet to take control of Power Station Alpha from the Decepticons. Not even removing his monocle first.

This is easily the worst instalment to date. A bunch of bridging scenes were never going to work well on their own with nothing to bridge to, but the lack of Transformers and the dullness of Barbara and Hawk’s sex lives makes for an incredibly uninteresting read.

With the story mostly being static, the only moment of Trimpe’s art that stands out is Shockwave poking himself in the eye for no reason. 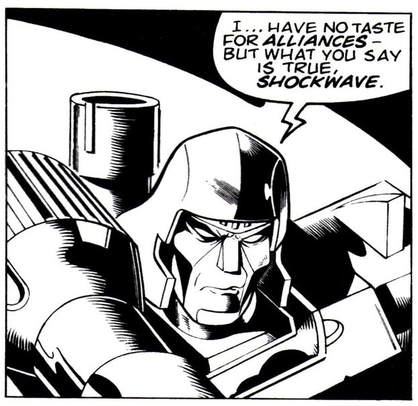 And I managed to write the whole piece without making a Tories/DUP joke.
The Bad-Guys Ball! Is at least memorable and has a bit more going on that just the one gag format of most of Earthforce to date, even if the central conceit doesn’t stand up to a huge amount of scrutiny.

The idea is a straightforward one: The infighting between the different Decepticon factions has gotten so bad that Megatron and Shockwave (Scorponok no longer seems to be in contention, though he’ll be mentioned next week) decide to try and call an “Enclave”, a long standing Decepticon tradition to sort out such issues.

Whilst this is a nice call-back to their previous attempt to sort out a joint leadership way back in Second Generation!, it does seem contrived that they would be such a tradition that goes back far enough for them to be aware of and interested in it. Back on Cybertron, Megatron was undisputed Decepticon leader before Ark-launch with no hint of in-fighting. Whilst the enclave tradition could have started whilst the likes of Straxus were rising to power, our two boys would have missed it entirely.

Still, the framing device is just an excuse for the money-shot: Decepticons having that sort of awkward works-do every single one of us has been to. Sharing drinks, eating nibbles, ignoring the speeches and they chat amongst themselves and, best of all, Ravage drinking out of a bowl. It’s Pete Knifton’s (inked by Michael Gibbs this time) best work to date, indeed if asked before rereading it I would have sworn this was drawn by Andy Wildman as it’s very much in his more humanised lighter style. 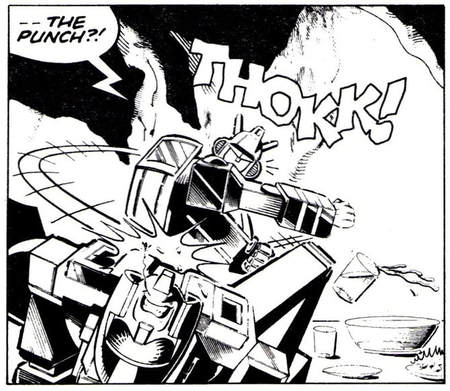 Jazz actually waited an hour to strike so Headstrong would be standing by the punch at this point.
It’s almost a shame a plot has to intrude on the fun, as four Autobots (Jazz, Sunstreaker, Bumblebee and Ironhide) are spying and worried about how just the four of them can break-up this team up when they’re outnumbered nearly ten to one. Sunstreaker in particular has a lovely “Has our leader got it in for us?” moment. Luckily Ironhide has a plan “So sneaky I think I’m on the wrong side!”

Said plan suggests he’s a fan of The Prisoner episode Hammer into Anvil, as it involves turning the Decepticons own paranoia against them. Starting with sneaking up on a snookered Headstrong (“Hur...have I tried the multi-carb speshial? Better make shure...), letting Jazz crack one of the great Bond-one liners of the series with “Why not try—THE PUNCH?!”, which is one you can tell he’s been waiting for a chance to use for years.

Divebomb looking forlorn and lonely by the buffet bar after his fellow Predacon vanishes is adorable as well.

There’s also a much more meta and self-aware gag as the Autobots use Headstrong’s gun to fire on Megatron and the his troops all fire back in the wrong direction. Leading Jazz to wonder how the bad guys ever manage to hit them, a wry comment on the stormtrooper level accuracy of cartoon villains.

Once they manage to aim roughly in the right ballpark, Headstrong is thrown down, making it look as if one of Shockwave’s troops has tried to assassinate Megatron and the entire thing was a trap. Leading to a massive fight of the sort most of my work dos end on. When the dust settles, Jazz decides to take advantage of the abandoned party to get on down and bogey whilst moping up the remaining energon.

Whilst light, there’s enough good gags and fun art here to make this an entertaining diversion, with lots of nice little details (Megatron’s look of utter disgust at having to share a stage with Shockwave is priceless) that help it stand up better to rereading than some of the stories we’ve had recently. If Snow Fun! showed the quick gag format at its worst, this demonstrates it can work if just a little more thought is put into it.

This is actually the song playing over the credits of Spider-Man Homecoming.
Transformation uses the sidebar to talk about the forthcoming return of the Survivors in two weeks, the first sign Earthforce is about to get a lot more serious. It also emphasises the long running Madeupcommieland G.I. Joe: The Action Force storyline is now wrapping up. And it has been a long runner, Stalker and company were captured 13 issues ago!

Combat Colin goes to the annual Heroic World Savers Con in order to hang out with fellow comic icons, including previous guest star Macho Man and Desperate Dennis from the Dundy Comic. A mysterious villain unleashes the singing robot Steamroller-Man (who has a very familiar tune, “Does whatever a steamroller can!”), flattening Macho Man in the process. Can Colin and Steve stop the robot? “Flat chance”.

There’s also a clue as to the identity of the villain in the caption inviting us back next week, “Are our heroes doomed?”, can you guess who it is?

Dreadwind (who has to share his page with the second Indiana Jones token) gets an unsigned letter asking various Matrix related questions, including who Optimus Prime used to be. Which gives the Decepticon the chance to show his true feelings about the War Dawn description from two weeks ago as he just says Prime was always Prime and Hot Rod only changed names because he still needed to grow up. Whether this counts as failing to answer a question properly depends on how you feel about the cartoon.

Stephen Flaherty from St. Helens writes in to say he’s been reading from issue 1 and how amazing the American stories are now Furman and Senior are on them. Which just goes to show Flaherty will get you anywhere.

The Tenth Letter begins a new G.I. Joe: The Action Force story from issue 66 of the American book. Amusingly all the effort of Snake Eyes and company to go undercover is made completely pointless by Storm Shadow, Jinx and Billy working out where Stalker is being held and just going there with no fuss or bother or need for elaborate covers. When the two groups of Joes meet up, the circus is playing at the gulag town, where it turns out the White Clown only plays these areas because his great love vanished into one some time before. Which is convenient, but the scene of him being mocked by a Madeupcommie guard is surprisingly strong.

Next week, get a good night’s sleep. 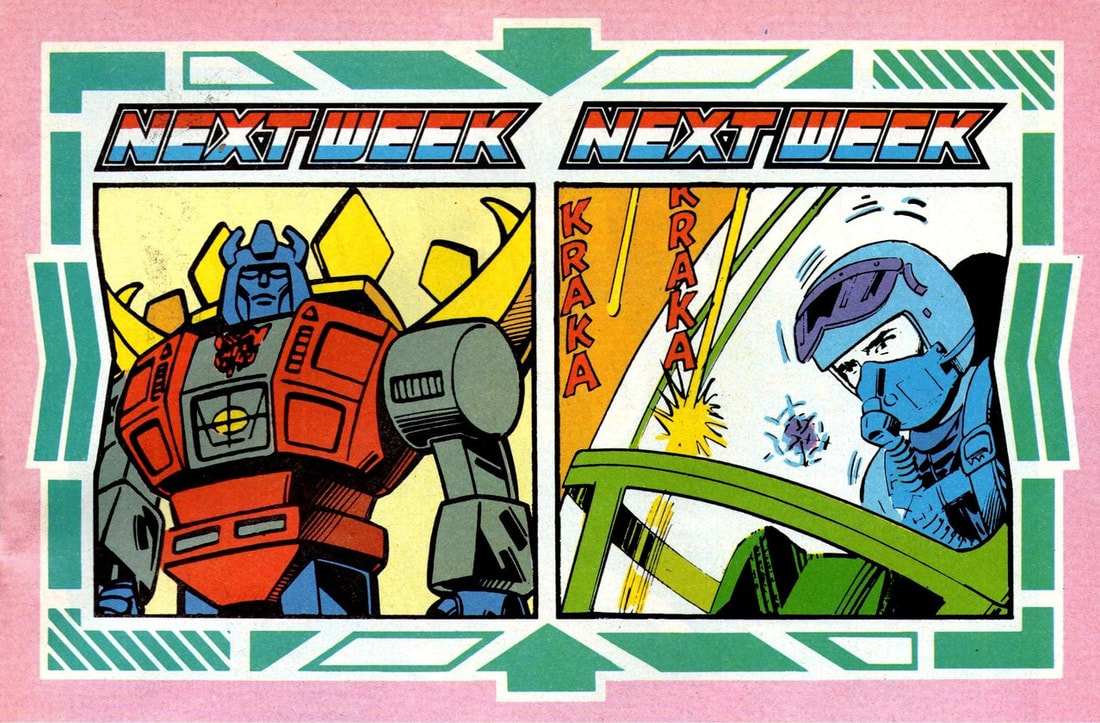