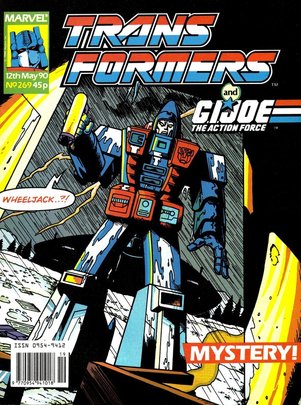 
First up, for people who can't get enough of me, I guest stared on the first episode of a new podcast, Civil Discourse, talking about casual Vs. "Real" fans of various things, including Transformers, it was fun to do and you can listen HERE.

As was the case four weeks ago, this issue’s cover of Skydive looking worried as he searches for Wheeljack is repurposed—and in this case presented at a slightly different angle—from interior art. With it presumably being picked because it’s about the biggest panel in the British story rather than because it was the most dynamic.

This sort of cost cutting measure hasn’t been seen since the earliest days of the series, and thankfully won’t be an experiment that will continue past this point. The problem of course is that the short length of the UK stories means there’s little room for massive dynamic panels or splash pages that would work as the main selling point on the cover.

All original covers means artists won’t be losing out on a paying gig as well. 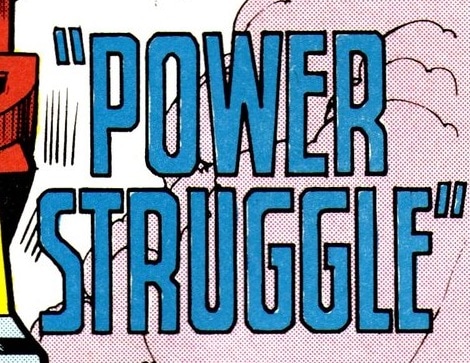 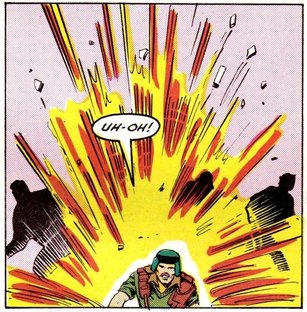 Joe Crankcase using his famous forcefield to sit in the middle of an explosion there.
Power Struggle (because it’s both a struggle over a power station and a struggle for power between the various alliances between the characters. Ah!) kicks off the second part of the G.I. Joe crossover with—in terms of writing at least—is a surprisingly action packed instalment.

A Superion so angry he’s literally shaking with rage demands answers over Bumblebee’s death, leading to a pitched battle between him and all the Joes (or The G.I. Joes as an awkwardly changed caption puts it. They’re still struggling with that name change) who have been waiting in the canteen for the chance to beat the crap out of some pacifists.

Superion causes the Joes some problems, but by holding himself back, he becomes a vulnerable target for their firepower, but in the end only leaves after Blaster calls him up to say Optimus Prime has died (see issue 106).

Sounds exciting doesn’t it? The problem is, Herb Trimpe’s art is unusually static for him. Superion just stands there the entire issue, barely making the effort to lift an arm. And of course, by coming and then going Superion has done little to progress the story beyond providing a cliff-hanger. 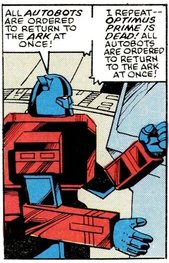 Arise, Blaster Prime.
Of course, the death of Prime off-page after being presented as a lead character in this miniseries, and for Blaster to take over the distant leadership role (and also Prime’s colours thanks to Nel Yomtov) with no introduction is needlessly confusing for readers not following the parent book.

There are only two other things of note. The first is that the way you can tell Larry Hama isn’t writing this is that both Sgt Slaughter and Roadblock appear but neither one says anything racist or idiotically patriotic.

The second is Joe Crankcase appears, making me wish this was a story teaming him up with Decepticon Crankcase for an adventure of “Who’s on first?” style comedy misunderstandings. Guest staring Shockwave and Shockwave. 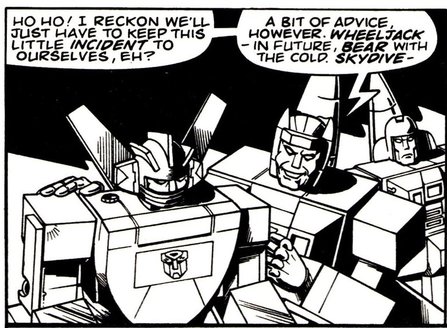 *Freeze Frame*
After toying with serious melodrama last week, Mystery! sees Earthforce return to the quick gag structure of the sort that’s mildly diverting but very hard to write about.

So Skydive goes to relieve Wheeljack of guard duty at the under construction Canadian Earthforce base, only to find him missing and signs of a struggle. Quickly imagining a desperate fight with a Predacon, he rushes to take down a mysterious shadowy figure...who turns out to be Wheeljack, trying to hide embarrassing evidence of having knocked over a heater after being startled by a polar bear. Cue laughter as Air Raid (who somehow thinks he’s worthy of giving actual proper character Wheeljack orders) tells the scientist to bear with the cold next time.

Which is fair enough really considering that (as Ryan Frost pointed out to me when Grimlock was feeling the chill a fortnight ago) Transformers can survive in space. Is Canada worse than the empty frozen vacuum?

This mainly works due to Wheeljack being exactly the sort of character who would do something like this. Indeed, that and him having far more important work to do resurrecting the fallen (presumably including the two featured Aerialbots) makes this a ridiculous misuse of manpower. It’s like getting Stephen Hawking to run the tea trolley at Jodrell Bank.

On art, Petes Knifton and Venture do a solid job with a script that doesn’t ask much of them. I especially like Skydive imagining a ridiculous nightmarish Predacon rather than an actual member of the team. However, black and white is not kind on the basically identical Superion limbs, to the point Transformation mistakes Skydive for Air Raid as it introduces the story. 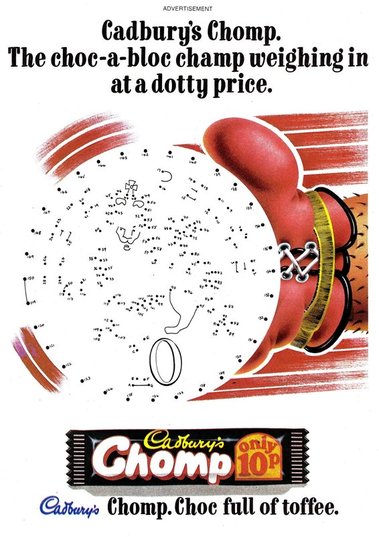 Fill that in on your lunch break.
Transformation reveals that a great many readers who entered the Classics Heroes competition sent their entries to the wrong address, Marvel rather than Hasbro. It does assure them these have been passed on, but asks for anyone still waiting to post theirs to make sure it goes to the correct people.

AtoZ covers Silverbolt and Skids, meaning in a unfortunate bit of timing you can see how Optimus quoted the former’s character profile almost word for word last week.

Combat Colin goes on holiday to Merryport, a town that features several jokes at Stinger’s hobbies like a McGoohan’s Burgers (in a Portmerion style house) and...err...Topless Bingo. His desire for a quite break is frustrated by all his friends and all of their friends inviting themselves along, and then finding out that all his villains are on holiday there as well. And have bought the last ice cream. Which makes him go into a Combat Frenzy that results in a week in a police cell. Which means he can finally have some peace.

Looks like Stringer must have had a rough spring break that year.

A letter from Unicron seems to put Dreadwind on his best behaviour as the answers are much more solid this week. Most notable is Colin Harvey of Moss Side asking what Xaaron turns into, which technically results in a Dreadwind Fails to Answer Questions Properly! as we know he has a combat vehicular mode, but the idea of him as a toaster thanks to that mouth is wonderful.

The current G.I. Joe: The Action Force story concludes with Fred coming into his own by successfully getting over his shock and taking over the mission, destroying the network of satellites that could have given away Cobra’s Terrordrome game. Unfortunately this character work will be quickly forgotten and he’ll soon revert to a cowardly comedy character as this idea runs out of steam. 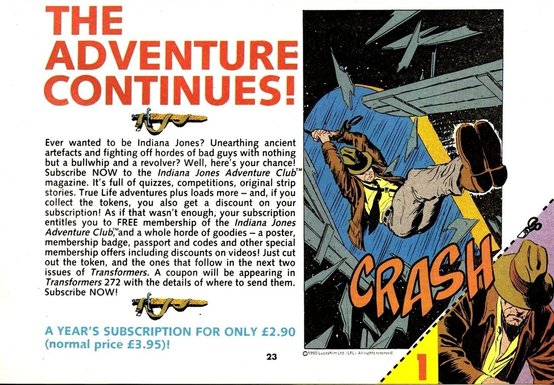 If adventure had a name... It would be Hat.
More fun is Snake Eyes and company going undercover in a circus in Madeupcommieland as Los Trio Terrifico. This involves The Blind Master standing on a rubber ball juggling chainsaws whilst Snake Eyes stands on his shoulders throwing knives at Scarlett as she spins on a wheel of death. You don’t get that on Britain’s Got Talent. It also introduces the White Clown who will go on to be important in future stories.

We also get an advert for Tiger Force toys, a series of repaints of old Joe vehicles in tiger based colours, one of which has the mildly rubbish name of Tiger Paw.

And speaking of adverts, the back cover promotion for Cadbury’s Chomp (only 10p) involves a ridiculously complicated looking join the dots puzzle. But the real highlight of the issue is a promotion for the Indiana Jones Adventure Club, which for a yearly subscription of £2.90 (normally £3.95) will get you a magazine (featuring True Life adventures), poster and passport amongst other things. All of which can be got using the tokens included with the comic over the next two issues.

What’s especially amusing though is the accompanying art, presumably from the magazine’s comic. They clearly don’t have the right to use Harrison Ford’s likeness, so Indy resolutely keeps his hat down over his face in both images, even when swinging on a rope. 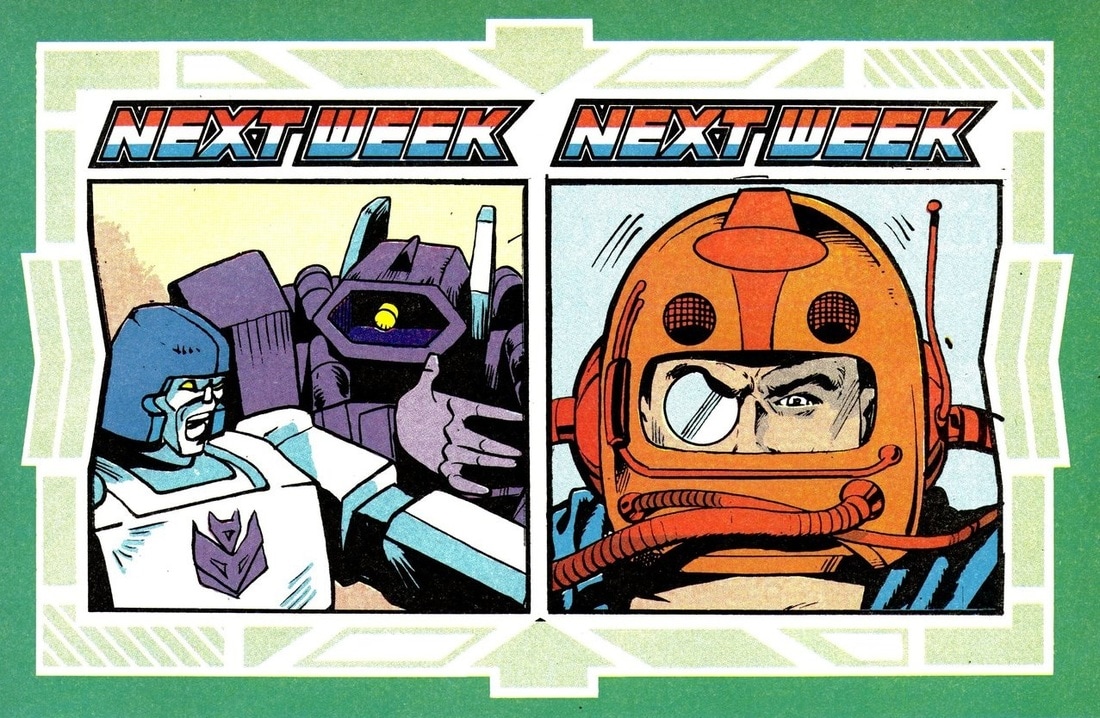