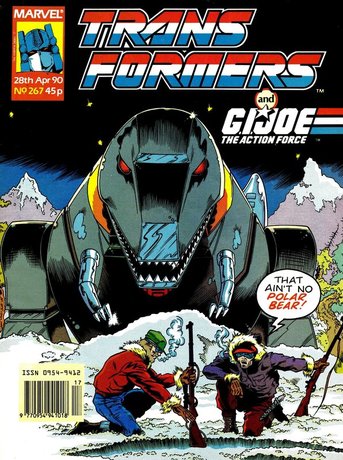 
I’ll be there, Blockwave!


We’ve had seasonal stories before of course, mostly for Christmas or New Year, plus the comic has generally stuck as close to “Real” time as possible up till now. So it’s odd that a weekly comic book that goes off sale at the end of April sets itself up as an April Fools Day special.

Normally I’d put this down to a story having been swapped late in the day (as did happen with the one that was supposed to run the first week of April), but the previous batch of Earthforce stories have to flow into each other, making it hard for the entirely stand alone effort we get this week to have been intended to go any earlier in the last six weeks. It’s as if Furman had such a burning desire to do this gag that he went with it anyway, despite now being very old news.

Before that though, we have the third part of the greatest and most protracted prank ever played on readers of a British comic. The scamps. 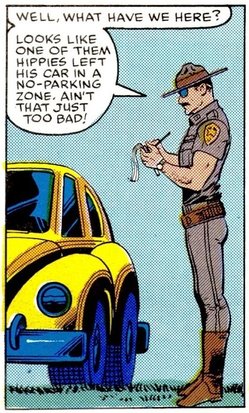 Best part of the story so far.
For the first time in this crossover we get more pages with Transformers on than without, once we skip past the Dreadnoks getting told off by Zarana for trying to add some action to the earlier parts.

The exciting robot focused action is based around Bumblebee...parking. Overnight. Whilst there’s a nice gag of him getting a ticket (“This would never happen to an Aerialbot!”), it does rather show up how languid the pacing has been. As does an entire page being given over to Power Station Alpha “transforming” prior to take-off.

Luckily Bombshell isn’t having any of this crap, and when he arrives and is told by Dirge an Autobot is present, he decides to have some fun. Zapping protest kid Tony (playing with Joe dog Mutt, doing sterling work on security there) with a Cerebro Shell and making him walk towards certain death just because he knows it’ll bring the Autobot out and into trouble. Which actually makes for an effective faux-cliffhanger.

It’s not often Bombshell gets to be the best thing in the comic, and his sadism here nicely calls back to his treatment of his human slave in Aerialbots Over America!, but it’s a very hard slog to get there. 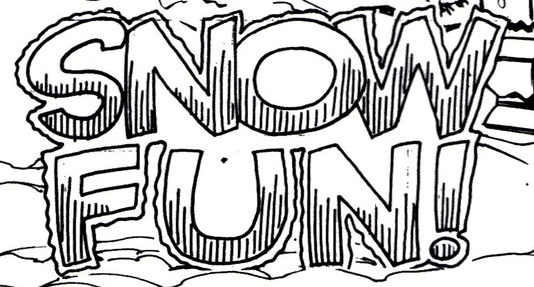 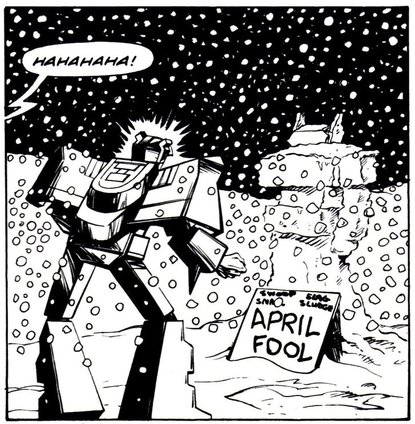 You're not a real fan till you've made a Shockwave snowman.
It’s fair to say that, for people who hate Earthforce, Snow Fun! is likely exhibit A in their argument for why it’s so bad. It epitomises all the things folk don’t like about this run, being entirely based around a silly punchline with extremely childish humour. Indeed, in my advance social media promotion for this week’s piece regular reader Ralph Burns told me one specific panel in this story was the point he officially Gave Up.

Rereading it again though, it did raise a few smiles for me, even if there’s not really much to discuss in this very simple story of the Dinobots celebrating April Fools Day (and it emphatically is April 1st, so Earthforce has gone from being set vaguely in the future, to being “Now” to being three weeks ago) by tricking Grimlock into thinking Shockwave has challenged him to a fight in a blizzard, only to find a ‘Wave shaped snowman instead. Making it the wrong moment for two Predacons looking for the Autobot base to come upon him.

What I like here though is the unexpected late in the day return of Bob Budiansky’s comedy buffoon Grimlock, stomping and snarling at the message from “Shockwave” in exactly the same way he did in his crown wearing days, even down to comically getting Shockwave’s name wrong like he used to with Fortress Maximus. That joke wore very thin when Bob played it out over a year, but within five pages it gets to come in, have some fun and get out without becoming tiresome.

The Dinobots are rather fun here as well, it feels right they’d be prepared to take the piss out of their leader as he becomes too self important in his new role, and panels of their barely contained laughter as they watch Grimlock or look concerned about what his reaction might be as he sneaks up behind them with a giant snowball are very nicely done. Indeed, Jeff Anderson is on fine form here, with a hitherto unsuspected comedic talent on display.

However, there’s really little else to say about the strip (apart from the Predacon fight being so violent it gets covered by a “Censored” banner. Which is exactly the same joke Combat Colin did a few months ago, minus Kylie. This was also the panel that so enraged young Ralph), it’s pure light froth that barely lingers in the memory. 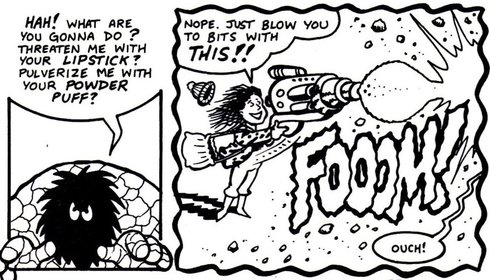 This is the future liberals want.
Transformation is rather sheepishly forced to admit that there’s a lot of G.I. Joe mucking about with satellites this week. But at least there’s the forthcoming Collected Comics with the second chunk of Target: 2006 to look forward to.

Combat Colin (amusingly directly opposite the borrowed “Censored” gag) is off sick, so we instead get an adventure of Combat Kate, who has perhaps surprisingly taken on Headline Howard as her Semi-Automatic Steve. She’s up against the Amazing Dave/Mountain Man, who is deeply unimpressed with being faced by a girl, asking if she’s going to threaten him with her lipstick. Instead Kate shows exactly how to deal with online troll misogynists by shooting him with a massive gun.

After a few good weeks, Dreadwind returns to form and gives us several fine examples of Dreadwind Fails to Answer Questions Properly! Most notably telling John Limerick of Ascot that he’s no idea when the likes of the Monster Pretenders will be showing up. Which firmly shows they’re not even asking Furman about these things now as they’ve already been in the American comic. He also responds to John’s considered critique of the new format with “TOUGH!” We also get a sign of how involved Hasbro are with the book these days when he tells Richard “Don’t call me hume” Potter of Cheltenham that it’s very hard to find out information about new toys and pass that on to the readers. Though he does at least imply we’ll be seeing the Survivors again soon.

AtoZ covers Shrapnel and Sideswipe, the former being reduced to being simply “Sunstreaker’s brother” on the Transformation page. Meanwhile G.I. Joe: The Action Force does indeed involve Cobra attacking a satellite, before the Joes prepare to launch their own shuttle.

More notably though is the back-page advert for Joe toys that shows how far behind the reprints are, as gold bling Destro is now in shops even though I don’t think we’ll ever see issues with that costume in it in this country. And frankly, “Destro’s Deployer” is definitely what he calls his penis.

Next week, you’ve got to get back in time. 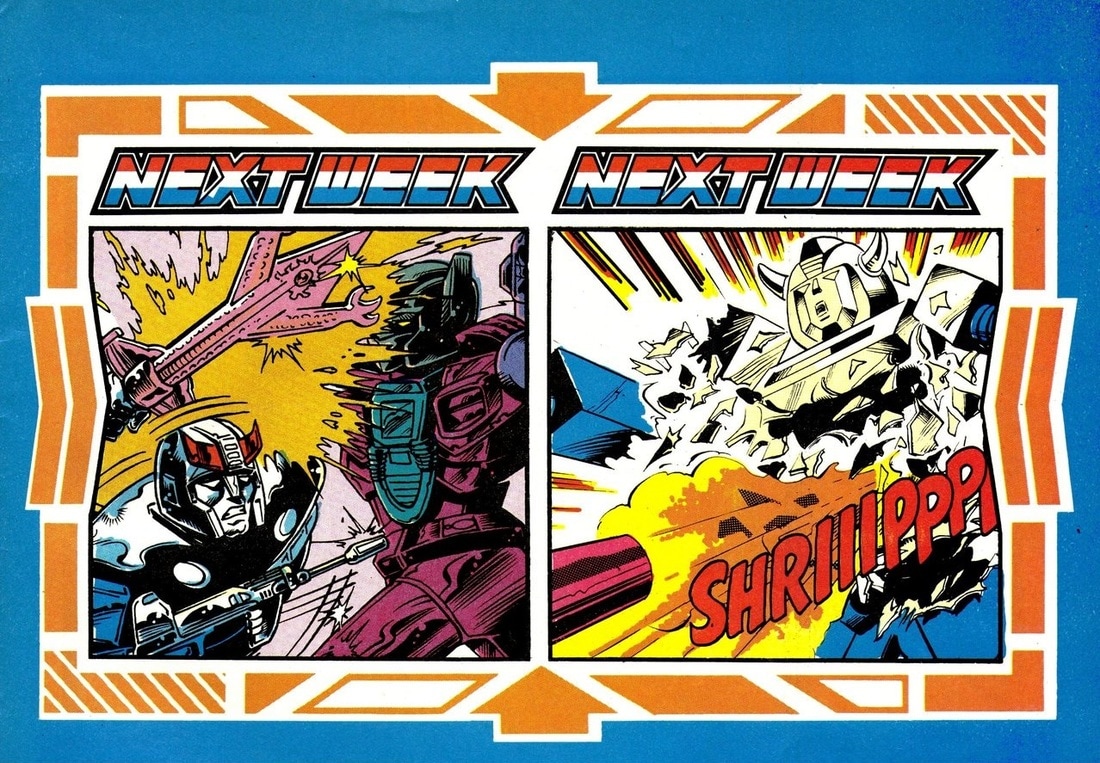