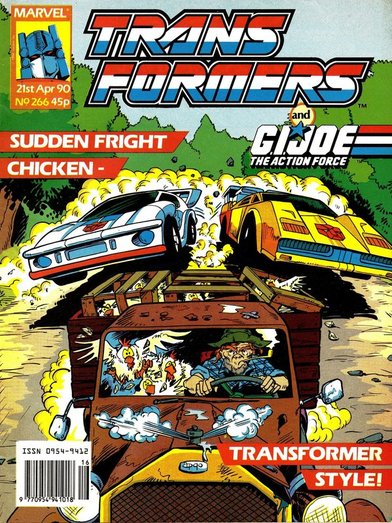 
One bit of old business before we launch into this week’s issue, one thing I failed to note about Once Upon a Time... is that it represents Andrew Wildman’s last interior work on a UK story as he finally makes the move to the American stories. His black and white work has been hit and miss, but at least he went out on a classic.

This week’s issue has one of the most awkward cover punlines of the entire series with “Sudden fright chicken—Transformer style!” For years I assumed “Sudden fright chicken” was a real if obscure expression (presumably referring to the almost literal game of chicken Jazz and Sunstreaker are playing on the cover) and this tagline just meant that when Transformers do it, they do it in a really extreme way.

But after Googling came up with nothing and asking on twitter it seems that, no, it’s a play on words about “Southern Fried Chicken.” Jesus, that’s awkward. 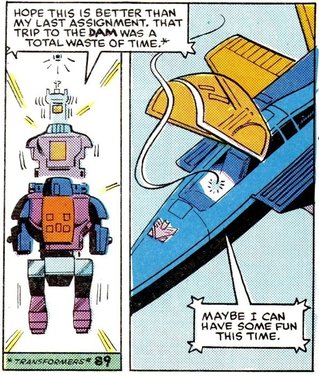 Enjoy this moment guys.
Inside, things aren’t much less awkward in the second part of the G.I. Joe crossover, as a fat senator gets to play hostage, allowing the Dreadnoks to escape. All of which is being watched from Cobra Island by a cheesed off Cobra Commander (with how fastidious the rest of this story has been about *See Issue-ing it’s surprising his musing on Serpentor goes without citation), who asks Zartan to sort them out.

Five of six pages into the issue we then have our first Transformers! Megatron is also watching what’s happening (oddly, unlike Cobra Island there’s no establishing location caption for the Decepticon base. Megs could be hanging around anywhere) and decides Power Station Alpha could let the Decepticons steal enough energy to take over Cybertron!

Which is where you know the minimal amount of effort is being put in here, there’s no more basic Transformers plot than “Decepticons try to steal energy”, and it’s usually a sign of an author not giving much of a toss. Still he calls in Dirge and Bombshell—who hopes this is more fun than the trip to that dam (see Transformers #89, amusingly a callback to one of those half-arsed energy stealing stories)—and tells the Insecticon to use a cerebro shell on Alpha’s computer. 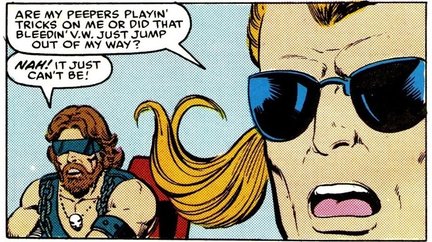 Strewth.
Which is at least one mildly nice thing about this series, obscure characters that haven’t done anything in years are going to get their little moments in the sun.

The issue then ends rather oddly with Bumblebee avoiding the Dreadnoks trying to slice his tires by...jumping up on his feet in vehicle mode? Which only gets a reaction of dull surprise?

In fairness, this moves more quickly than I remembered once it gets going. It jumps between three plot establishing locations, with only the over long hostage situation taking up needless space. But it’s moving quickly through a plot that isn’t especially interesting.

Another oddity is that the UK team has gone to the effort of compositing a new recap border for this story, taking a Lee Sullivan Prime (probably from Salvage! as I think that’s the only chance he’s had to draw the original) and what looks like a Geoff Senior Shockwave (not sure of the source there) and Hawk and Snake Eyes (which I want to say is from an early Action Force cover). See the bottom of the page for a gander at it. 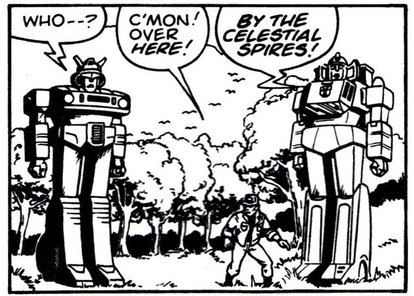 It's a good week for Dull Surprise.
The British story, Life in the Slow Lane, starts a trend of Earthforce stories being built around a punchline. Often a very silly punchline with little else in the five pages. I’m not averse to terrible puns as you may have noticed, but it’s fair to say the intent here was to provide a light-hearted counterpoint to the increasingly serious and complicated American stories for younger and more casual readers. Which is a fine idea, but the lead story being a reprint of weak material for the bulk of the Earthforce run means they have to carry the weight of the entire book and they’re often not up to it.

So, finally catching up on Prowl’s fate from over a month ago, Jazz and Sunstreaker are racing through Deliverance country because the satellite Prowl was wrestling with has been found, but it’s still dangerous and an unsecured comms channel means the Decepticons now know this as well. The idea of Skydive having screwed up in this way and Jazz’ annoyance at him is probably the best joke in the issue.

This means as well as the two Autobots, the Battlechargers are racing towards the satellite for Megatron (despite working for Shockwave previously) and Drag Strip and Dead End are on the job for Shockwave (despite having worked for Megatron previously). With all three teams banging along at top speed because, like Prowl, they live in the fast lane. Because you wouldn’t think of Jazz as a laid back dude. Nor Sunstreaker as someone who’d rather get a polish rather than take part in a chase. 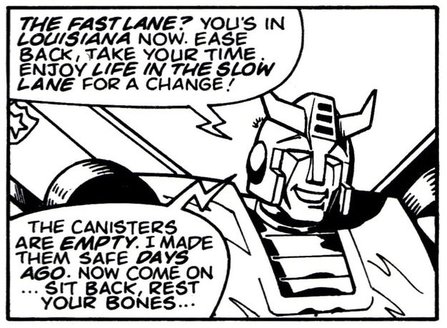 This is just wrong.
But when they get to the satellite and find the Decepticons already fighting over it and Jazz bemoans not being as quick as Prowl a human calls them over...

To show Prowl living the high-life being looked after by folk who would lynch a black man but have no problem with giant alien robots. He’s even getting a soapy wash from a young woman like he’s some sort of a Skids. Turns out living in the Southern States has totally chilled Prowl out. To the point he’s not even bothered to call in to say he’s safe and he’s wrecked the satellite. Leading to a forced ending attempting to mirror the opening as he somehow manages to quote the speed cop on the first page about how in Louisiana you just don’t give a fuck about anything.

This is bizarrely out of character for Prowl, especially as it’s an epiphany that will never be mentioned again. But then, by kicking back and relaxing he’s allowed Grimlock to take charge again. So no doubt a lesson learnt.

This is an awkward and largely unfunny story, not helped by mediocre feeling art from Peter Knifton. Most notably when the human approaches Jazz and Sunstreaker they suddenly jump six foot apart between panels and assume their stock Universe profiles.
Transformation talks excitedly about the crop of new artists on the book, whilst also telling us Andrew Wildman will be taking a break whilst he starts on the American series. This will become a permanent departure from the local strips though.

Combat Colin defeats the shrinking room with a Doctor Who joke as he “Reverses the polarity of the magnetic flow”, causing the submarine to explode! Madprof’s attempt to escape in the Mad-Copter is undone by the “Waterproof ‘Copter Buster Gun” and everyone gets taken to safety thanks to Steve’s inflatable pants. What a sight. The villains are then forced to re-dig the tunnel, meaning they’re paying for their crime (all together now) “In spades!”

Dreadwind seems to have turned a corner, as we get an entire page with entirely sensible answers to questions. One being “Yours scrumptiously” from the King of the Mechannibals might have something to do with it, but between this and the more sensible approach to announcing the crossover last week I almost wonder if Euan Peters editorial reign has ended sooner than is traditionally thought (the Titan books placed his departure in the late 200s).

Most notably, Dreadwind goes out of his way to explain the difference between the US and UK colouring to Andrew Dornan of Fareham’s questions, especially assuring him the more dotty look isn’t due to the UK reprinting being on larger paper than the original American. Which is simply something you would not have expected from this page a month ago.

G.I. Joe: The Action Force starts a new story, Shuttle Complex from issue 65 (which being from 1987, is actually closer to the lead strip chronologically than it is to 1990). Which is mainly going to be a plug for the Joe space shuttle toy, but most of the humour comes from Fred’s desperate bluffs pretending to be Cobra Commander, resulting in him inadvertently agreeing to lead a dangerous mission from the front without realising it whilst Serpentor waves him on cheerfully. All thanks to his strong and stable leadership. I wonder if it’s too late for Cobra to get Lord Buckethead in? 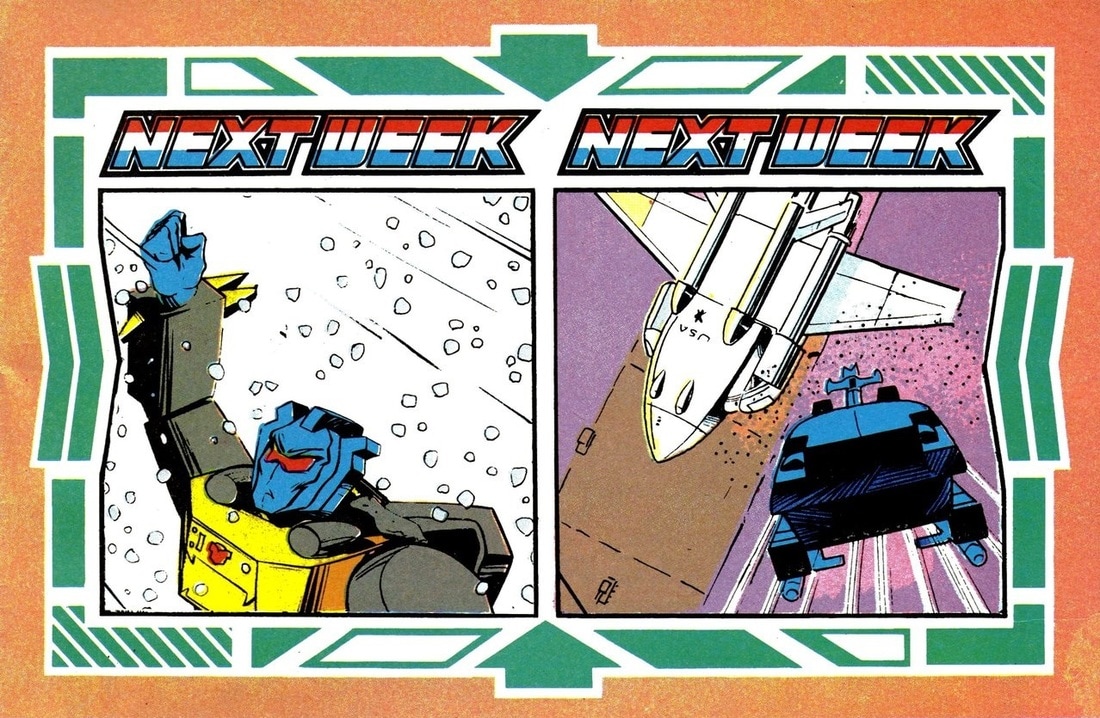 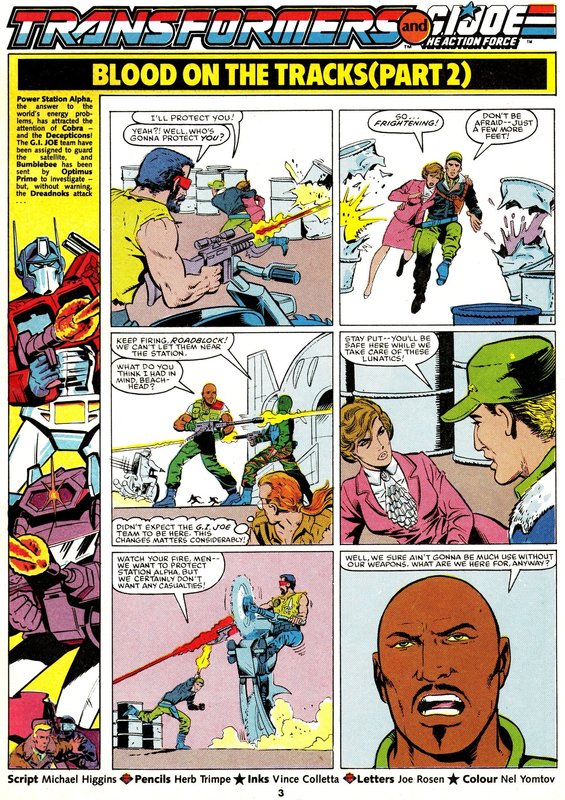