Lead Me Not Into Temptation. 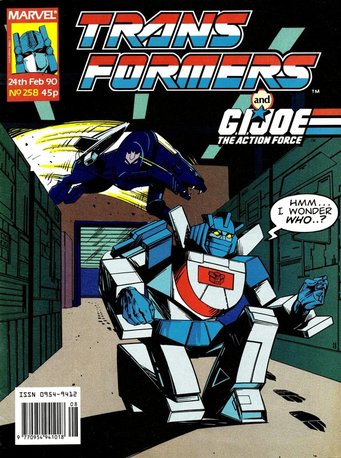 
If I’d wanted you dead, Wheeljack, you’d be paper-clips by now!


Ah, good old Jeff Anderson. His cover this week means we’re not just getting old characters, but old poses. Because as Ravage jumps out at Wheeljack his is of course doing so exactly as in his Universe profile. And you thought Robin Smith had used up the comic’s entire quota of that pose during the first part of Time Wars. Though impressively, I don’t think Staz uses it once within the story itself.

Before that though, we see the conclusion of probably the most successful reprint (in terms of presentation if not the quality of the story) to date as Worlds Apart! ends. Transformation is fairly dismissive of it (merely suggesting you glance your eyes over it), but it ends with an actual closed ending that doesn’t leave you as feeling you’re going to be missing something by the original next story not following on from it. It is perhaps a shame the rolling soap opera nature of the series means there are very few other short entirely self contained stories to choose from in future.

Hey, they even manage to correctly change one of the “See Issue” boxes for once! 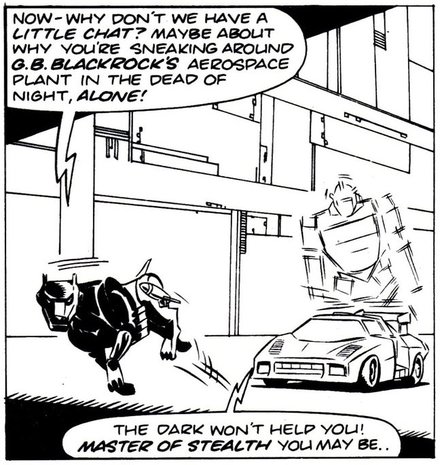 I love Ravage's little glance at the reader there.
The fourth part of Perchance to Dream focuses on who is easily the most established character of the five Autobots featured. Whilst the others have struggled for tidbits over the years, Wheeljack managed to keep up a solid supporting role right up to the end of Grimlock’s leadership, where he was the frequently frustrated non-Dinobot right hand man to the crown wearing buffoon. Plus of course, he was incredibly memorable in the cartoon thanks to his famous flashing ears. Prowl and Ironhide have overtaken him in media since, but at the time Wheeljack would have felt like the more familiar Autobot.

In terms of structure, Furman is very smart here. Four weeks in and most readers would feel they know the score. Mr Mystery selects an Autobot, they have a first person narration led dream about their sins, then he picks them for his Mysterious Purpose. If, as was basically the case with the framing of Aspects of Evil!, exactly the same thing was done each issue it could start to get repetitive, even dull. So here the author shakes things up and helps to add to the mystery as the stakes shift.

Firstly, our surprise villain does not appear. Making this the one issue where you can’t easily guess who that is. Secondly, Wheeljack narration isn’t just about his past life but very much in the present tense. He knows his dreams are being watched and is trying to puzzle it out as he recounts his story. He even notes the narrative time jump that happens at one point as being strange, predating a similar gag in the Doctor Who story Forest of the Dead by two decades.

The story itself is set in the aftermath of Optimus getting his head back (“Way back” in issue 40 as a caption puts it), or more accurately soon after Dinobot Hunt! Pleasingly, someone has remembered that Jetfire has lost his Decepticon symbol, but not been Autobranded yet. At least I hope depends it was a deliberate art choice, rather than Staz just forgetting to draw it in. 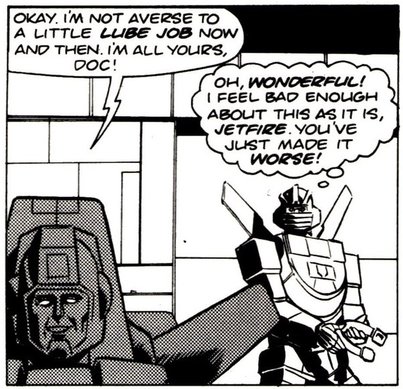 I'm sure "Lube Job" will be the only thing in this issue that reads a bit unintentionally odd as an adult.
As part of the blast from the past, Wheeljack is sneaking around the Blackrock aerospace plant that featured so heavily in the Prime’s head storyline. He’s tense and on edge, something that’s not helped by Ravage (who, sadly, is making what I think is his last speaking appearance) jumping out to go “BOO”. The fight that follows is perhaps rather one sides considering how heavily armed Wheeljack is, but it’s hugely entertaining as Ravage runs rings around him. A particular favourite moment being Wheeljack smugly expecting to catch the cat in his headlights, only to find Ravage on his roof.

After a bit of fun though, Ravage quickly cuts to the chase: Jetfire. Wheeljack has completely failed to duplicate whatever the Decepticons did to build troops on Earth and is having a sneak to see if he can find anything left behind by the ‘Cons that will give him a clue. Which is a little optimistic as you would expect the humans would have stripped the place of any weird alien technology pretty sharpish, but he is desperate.

Ravage then offers a deal: The technology in exchange for Jetfire. All Wheeljack needs to do is use a pair of special brain altering headphones on the newest Autobot and he’ll be reset to factory settings. Something Wheeljack is initially fine with as he doesn’t trust the guy anyway and what they’d lose in him could be countered by restoring those knocked offline by the Dinobot Hunt, before going on to build new troops.

It’s certainly naive, but it’s the result of exactly the same sort of stresses that put Ratchet over the edge during the last American storyline. Too many bodies, not enough resources, so it has the right sort of desperate feel that he would at least consider it.

The scene where Wheeljack is preparing to mind wipe Jetfire (possibly right before he gets Autobranded) is actually pretty funny. The scientist is trying to work up to the dastardly deed under the pretext of a medical check-up, but he becomes frustrated by just how cheerfully nice about the whole thing Jetfire is being.

Ultimately of course, Wheeljack doesn’t do it. But how close he came scares him, and he knows Mr Mystery knows this. But the watcher has made a mistake in Furman’s last twist; Wheeljack is no longer dead on a slab, he lives! 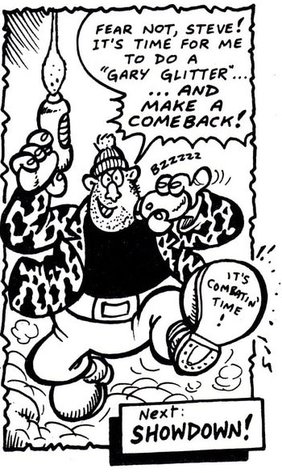 Wreck-Gar: No one will top my Jimmy Saville gag for awkwardness. Combat Colin: Hold my beer.
As with Sunstreaker, Furman here takes a part of Wheeljack’s profile that’s often played for laughs (the mad science) and treats it completely seriously to great dividends. It also takes great advantage of the five page format, being a tight focused conversation between two characters that plays to their strengths. On art, Staz does some great work, even with one panel of Ravage looking like he’s on steroids. All in all, a bit of a gem.

Transformation is mostly concerned with reassuring readers that not only will there be a new American story next week (again, emphasising it being written and drawn by Brits), but there will be an amazing free gift as well. Though it won’t say want. It also talks of a free poster and competition spread across the following two issues as well.

Combat Colin is a continuity fest as it turns out Combat Kate is the girlfriend of Headline Howard (from issue 226) and the entire scheme against Colin was a scam they organised, but things go wrong as the fez wearing underground dwellers (from issues 228-230) raise up and start their invasion, and they can’t be held off without Colin’s help!

Colin meanwhile is sleeping rough and begging by shoving whippets down his trousers. Said whippets then run off with his money before the Giggly Sisters fling literal mud at him. The comedic highlight though is Steve pretending he’d believed Colin was innocent all along when he overhears Kate and Howard talk.

With Earth under threat, Colin gets his shaver and laser out and declares that it’s time “To do a Gary Glitter”. 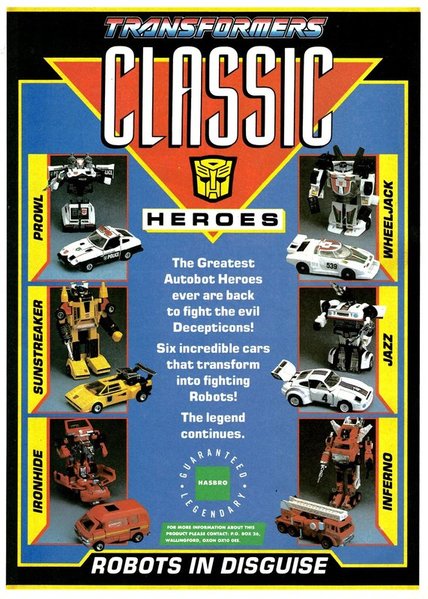 He means make a comeback! The worst thing Colin shoved in his trousers was unwilling whippets.

It’s certainly the most dated joke in the comic since Wreck-Gar quoted Jimmy Saville. Though it oddly reads like there’s supposed to be some sort of innuendo there, akin to “I thought you were like Cliff Richard... a bachelor boy” gags. Possibly it’s a reference to the rhyming slang, or just a complete coincidence.

Compared to that, Death’s Head writing a letter in seems positively normal. Dreadwind is surprised he’s living in East Dereham in Norfolk now, but it does give him chance to say (a mere two months into the year) that there definitely won’t be any more calenders. Neil McClean from Brixham also writes in with a very long list of errors in the comic that may be familiar to readers of this blog (Red Alert’s wrong first appearance in the AtoZ and so on), which gets a reassurance from Dreadwind that the VVH has been working overtime.

G.I. Joe: The Action Force starts a new adventure from issue 63 of the original comic in Going Under, which is evenly split between Snake Eyes being sad on a beach as he thinks of Stalker and the three prisoners being mistreated in Madeupcommieland. There’s also a joke about the Dirty Commie’s making children’s toys with slave labour. Which is a bit hypocritical when you consider how Joe (and Transformers) toys are made.

It’s most notable though, a mere week after a similar random rant at the French, for Flint telling Lady Jaye the reason they’ve all come to Grenada on holiday is it’s one of the few tropical islands that doesn’t hate Americans. Jesus Larry, let it go.

Plus, remember that as far as the UK is concerned, Flint is British…

The back cover features our first advert for the Classic Heroes toys. Which attentive readers will note doesn’t include Silverbolt, but does highlight Jazz and Inferno. So I guess the question is, which of them has replaced Silverbolt and which of them is going to be the mystery villain in the final part?

One interesting thing about the Next Week box about this story I’ve not mentioned, is that rather than being art from the following issue, it instead contains the featured Perchance character’s Universe art, in this case Silverbolt. Which makes me wonder if next week’s will blow the big surprise return for the finale... 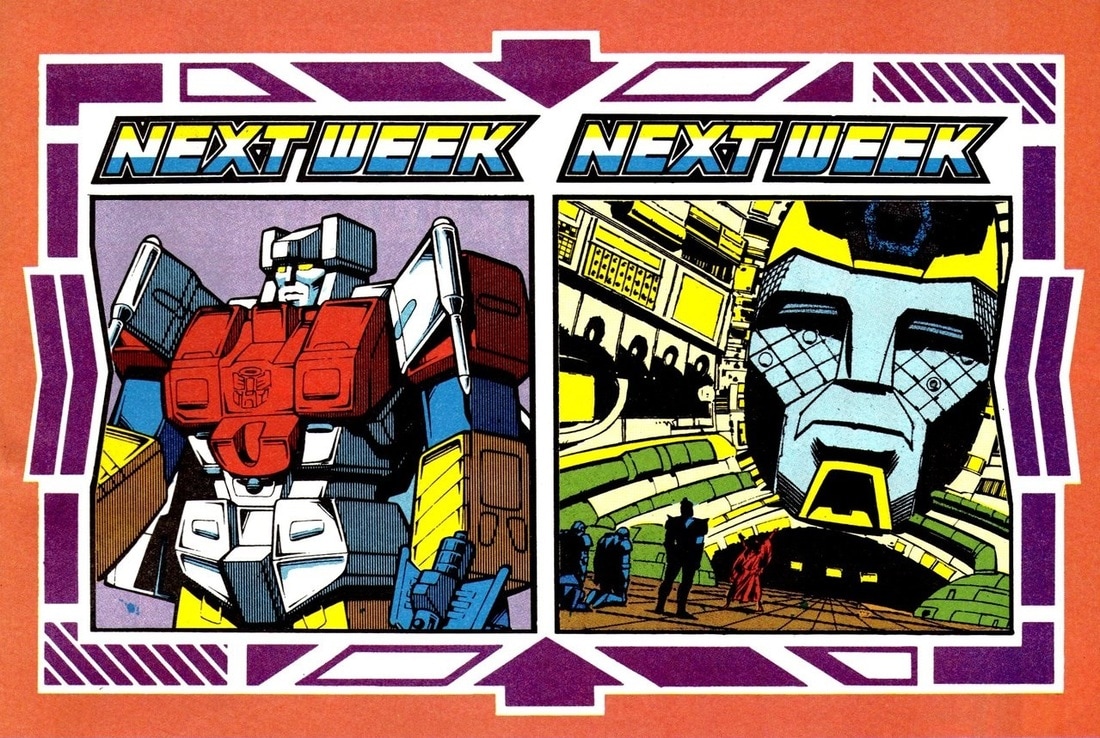