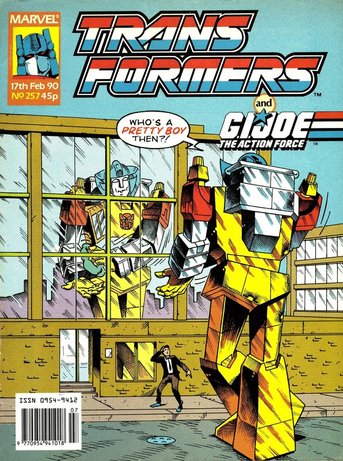 
Sometimes I’m so clever, I even amaze myself!


If last week’s story was the segment of Perchance to Dream (oh, and the full title is back, so that was a mistake last week) that tends to be forgotten, it’s equally fair to say that Sunstreaker is the instalment of this anthology epic for most fans.

The reason is very simple, it does something the book has never attempted before, something that it’s actually surprising Furman was able to get away with considering that Sunstreaker was to all intents and purposes a new Heroic Autobot toy the comic was promoting. The first and next two parts are about conflicted Autobots wrestling against their character flaws and frustrations to do the right thing. And importantly, however reluctantly, they all do indeed do the right thing in the end. Mr Mystery (who we get a really good look at the back of this week as he stares at his computer with a screen set to an over-large font. He’s oddly familiar) is clearly looking for chinks in armour, but importantly all the other Autobots featured still have armour.

Sunstreaker on the other hand is just a cunt.

Furman effectively pulls a reverse Flywheels here: The Duocon was our first genuinely likeable Decepticon. Sunstreaker is our first Autobot with no redeeming features whatsoever. The entire five pages is given over to all his worst and most annoying character traits and it was an extraordinary read when I was eight. Even now, used to fiction with shades of grey, it’s still surprisingly hard hitting.

Part of what makes it so surprising of course is that Sunstreaker is by far and away the character featured in this story to have done the least, having been killed almost immediately way back when in early 1985 and only being seen up and about again as late as Totalled! in ’88. Where he might well have been killed again as he didn’t pop up to be underbased in Dark Star. He’s been so out of the loop it’ll turn out he doesn’t even know who Galvatron is. 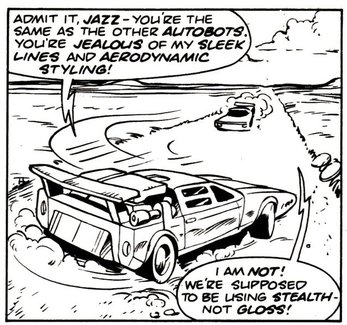 What a great guy.
That means we haven’t had lots of stories of Sunstreaker being a bastard, all we really have to go on is his vanity based Universe profile. Which feels more like it lends itself to light comedy (as is the case in the cartoon and will be for Tracks when he pops up again) than complete twatery.

It also means we get (after an oddly entertaining brief scene of Mr Mystery being disappointed his mind bug won’t work on Brawn) our most distant flashback, all the way back to around issue 3 or 4. Fortress Sinister is up and running and surrounded by human troops and Sunstreaker and Jazz are on reconnaissance in the surrounding area. Unfortunately for Jazz, Sunstreaker is a grandstanding buffoon, racing along at full speed and shouting about how great he is and how sad it is Jazz and the others are just jealous of him like Donald Trump in yellow rather than orange.

This on a stealth mission.

Unsurprisingly this gets the attention of the Decepticons, with Thundercracker and Skywarp using their tec spec powers to attack and take Jazz out. Incidentally, not being familiar with Skywarp’s teleporting skill when I first read this and the black and white not really selling the effect, for years I just thought he was breaking through the surrounding cloud cover when he appeared.

Looking back, Sunstreaker sees Jazz and goes to hep him...until he realises how badly damaged he is and that this will affect his own finish...err...that is he can’t risk going back with the Decepticons about. Tellingly, when the Decepticons toy with him by chasing him about and knocking him over, the damage to his bodywork ranks higher on his list of problems than having abandoned Jazz. 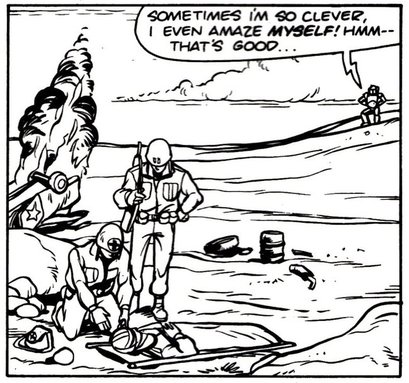 "We dropped the biggest bomb ever"
In a more traditional story, this would be where Sunstreaker would redeem himself by taking out the ‘Cons and saving Jazz whilst learning an Important Lesson.

Instead, his faffing about in terror brings him close to the humans, causing the Decepticon and human jets to have a brief fight before Megatron calls them back as they’re breaking orders.

Sunstreaker then rationalises the whole thing as a deliberate plan on his part (and there’s no one there to listen to his excuses, so he’s lying to himself!) before reassuring himself his bodywork isn’t as badly damaged as he thought. As we see the human soldiers treating their wounded (and lets face it, dead) amidst the smoking wreckage of their equipment.

So, one fellow Autobot badly damaged (though we know he’ll be back on his feet pretty quick) and damage and very problem death to humans, all caused by Sunstreaker’s vanity. And he seems to get away with it, without even a pat speech from Prime. Indeed, he'll effectively be rewarded for his behaviour here as it will lead to his resurrection in three weeks after making Mr. Mystery's list of suitable candidates.

This story shows the black and white format at its absolute best, tight focused and giving a chance for an almost forgotten character to shine. It’s aabout as dark as the UK series ever got (in character if not carnage) and I suspect blew the young mind of more than just me.

In theory, with his love of battered bots, Wildman shouldn’t be the best fit for a Sunstreaker story. But he works hard to make pre-smashed Sunstreaker smoother and cleaner than is usual for his art and clearly enjoys going to town when things go wrong. All in all, a minor classic.

"Do you care? Does anyone care?"
Transformation seems oddly pessimistic about reader interest in this story, revealing the names of the next two featured Autobots “If you’re wondering (or even if you’re not!)”. As well as trying to create a sense of mystery over who the final story will be about, we’re reassured that we’re about to enter another age of Transformers greatness as “hordes” of new Micromasters and Combi-Micros join the comic. Thankfully very few, if any (all those Micromasters look the same to me), will actually turn up.

It’s also keen to point out that Jazz is also a Classic Hero toy back on shelves, adding to the feeling he would have been a more natural fit for his own story than Silverbolt.

I should also mention the lead strip at least briefly. It goes from the start of the original Part 2 through to the escape of the Targetmasters. Sadly this is where the story starts to feel a lot weaker and it’s not as engaging cut up as the last two weeks have been.

Transformation may be happy to promise lots of new toys in the strip, but Dreadwind (failing to answer a question properly) won’t commit either way to Kevin Smith from Aberporth’s asking about Countdown, Skystalker, Skyhopper and Groundshaker. Dreadwind also only responds to a “Will the second story ever be in colour again?” with a “Who knows?”

Hi-Test does a little better with M. Riddle from Newcastle’s questions about Aspects of Evil!, being clear that Rodimus wasn’t old, just ill and that Unicron hadn’t previously been destroyed, but was living in the Matrix.

Meanwhile, Paul Martin from Knutsford (writing on behalf of the Dinobots, who suggest the page should be given to them) asks for 1990 Classic Covers Calendars. Dreadwind is pleased to get one vote for them, but as we’re in to February now, it looks like the idea has been dropped.

Action Force sees an annoyed Raptor lose Billy and Jinx, though he does manage to set his birds after them. And because Larry Hama hasn’t had chance to be randomly racist (as opposed to the specific plot based racism against the Eastern Bloc in the B plot) recently, as the two ninja’s arrive at a language centre Billy feels compelled to tell us he never bothered to learn French because why learn the language of people that hate Americans?

I’m not sure if there was something around the time of the original printing that made Hama go off like that (opposition to the bombing of Libya?) or if he’s just generally being a dick, but it’s wretched. 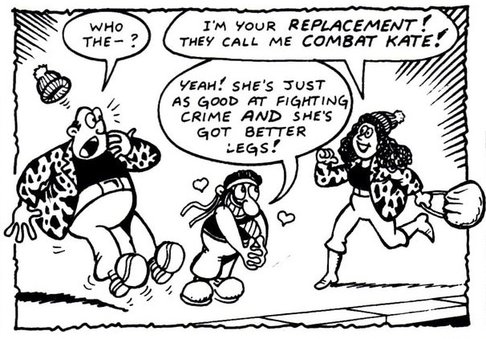 I like Colin's legs more myself.
In the more specific bigotry plot, Stalker and company arrive at the Gulag. It may be an artefact of the British printing being spread over months and breaking up the main series with issues of Special Missions, but I do have to wonder about the time scale here. All of Stalker’s misadventures in Madeupcommieland—including preparing the mission, travelling, getting caught, being tried and then transported—have happened over the same afternoon Raptor and Fred have shot and buried Cobra Commander.

Combat Colin Meets Combat Kate as Colin returns to Earth to find that everyone has turned against him. This is due to the Wednesday Wart running an exclusive about how he left Earth because he hated everyone and Semi-Automatic Steve smells funny and the Giggly Sisters get on his nerves. Brilliantly, Colin tries very patiently to remind Steve that he was there when the rocket took off and he knows the truth, which struggles to sink it.

Mainly because it turns out Colin’s replacement is someone Steve has become rather smitten with. Combat Kate (“She’s just as good at fighting crime and she’s got better legs”), who decks Colin when he tries to reclaim his job. Is this the end of our hero as a crime fighter? 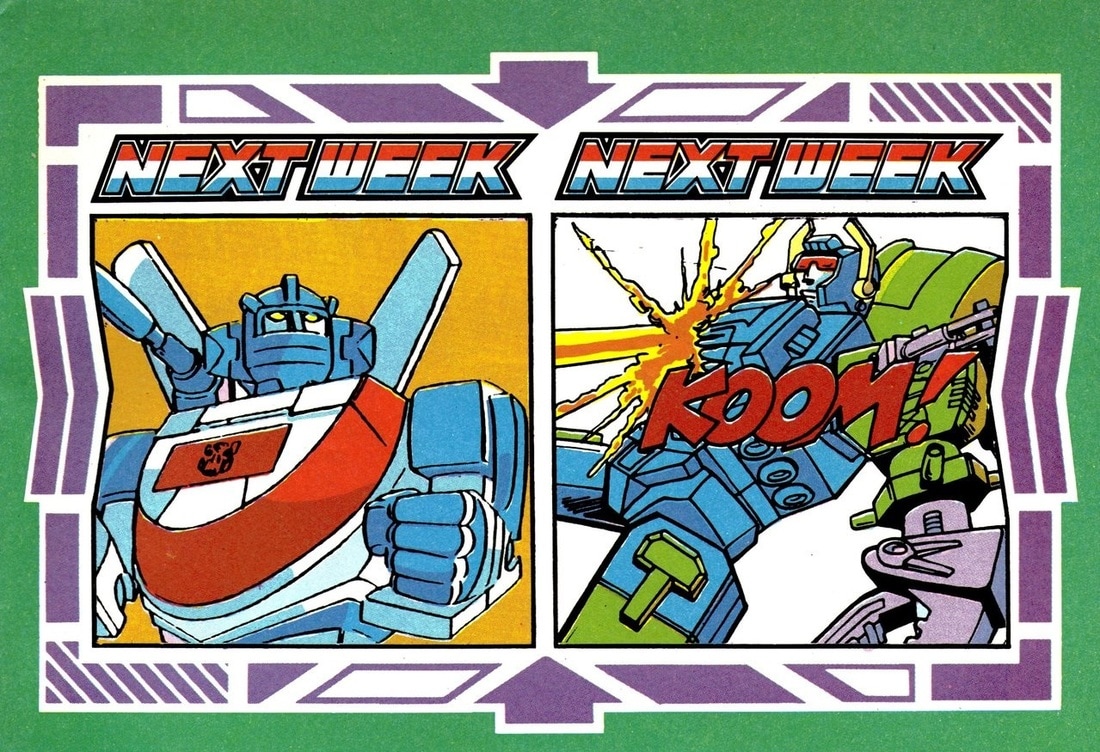