Your Own Personal Jesus. 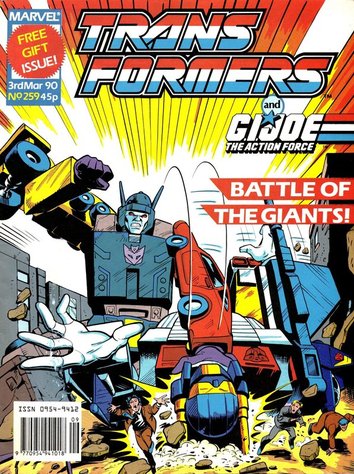 
Huh! Some creator! Seems to have dozed off!


The UK editorial team is presented with a unique problem this week. For the original American printing of the lead strip presenting the origin of The Transformers for the first time to local readers was a massive, easy to promote, deal. For this side of the Atlantic of course, it was well known. So how do you treat a story that (albeit with a different framing to the flashback) we’ve already seen?
The solution Euan Peters hit on is to basically ignore the issue. Transformation doesn’t make a huge fuss of the origin, but equally it does highlight it (just above the Classic Pretenders having a fight) as a part of the story as if it’s a unique selling point.

It also leaves the opening text box of the lead story, proclaiming this is the “First time ever” we’ve been told the origin, unchanged when previous editorial teams would likely have fiddled with it. If only because this first part of the chopped up story doesn’t get as far as the robots themselves.

This more than ever convinces me that the Dark Rodimus ark going out of its way not to name-check Unicron was an editorial choice decreed so as to not remind readers this was familiar territory.

"But proof denies faith, and without faith I am nothing" says God...
The other massive deal for American readers would have been that The Primal Scream is the debut of Geoff Senior on their book. From a British perspective, when we’ve had work from him fairly recently and over years, it’s hard to imagine what a shock to the system this must have been. I’ve become fond of Jose Delbo, but it’s fair to say he’s never quite gotten a handle on making the robots look naturally dynamic. To go from The Delbo Pose to the most energetic and dangerous artist to have ever worked on the series in consecutive issues must have been like a brick smashing through a wet paper bag. It’s almost a shame we’ve had four weeks of reprints as the shift from, albeit not his best, Will Simpson art is not anything like as sharp.

So we get strong, dynamic imagery that screams class from every panel. And which also gives us the chance to correct an oversight from the British presentation of the origin. Because, as I said at the time, whilst Jeff Anderson’s length of service means he had fully earned the right to draw issue 150, I think just about every reader would rather have seen Senior’s take on it. Even Nel Yomtov’s colours look better than usual on Senior’s art, being darker and moodier than we’ve yet seen from him.

Senior even makes the faux-cliffhanger of a ball of rock turning into Cybertron look impressive. This is an artist at the peak of his powers.

The story itself, is fairly perfunctory and mainly just an excuse to get to the flashback as quickly as possible. Primus turns out to have a guardian, a scrawny robot in a robe who is annoyed that Grimlock, out of all the Autobots present, won’t get on is knees and pray. Which he won’t do until he’s given proof this is Primus and not an elaborate trick.

Though Grimlock (in what I think is the last appearance of the “Me Grimlock dim” crown wearing persona) being unable to say “Hallucinate” is actually quite funny, the proof he asks for is odd, demanding to be told how he was created. 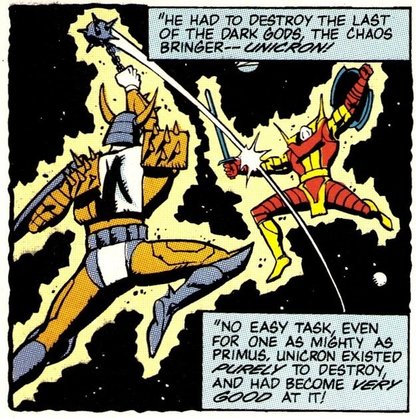 Even Yomtov nails it!
Now, as there’s an entire religion based around Primus, presumably Grimlock already knows this. As indeed would anyone wanting to trick him over it. If for some reason it’s a great mystery (as it was the first time we heard it, but then of course Primus was a complete unknown to the characters), then how will he verify that this is true? The guardian certainly seems to think he’s imparting some great secret that has never been told before as he begins his light and sound show.

Before this starts though, we get a quick cut to Cybertron to establish that Xaaron is working to get the transporter working again and is worried the Autobots don’t know the Mayhem Attack Sqaud are down there with them.

This means that when we return to the Primus chamber the story is already well underway, but pretty much covers the same ground of Primus (still looking like a big Hot Rod) and Unicron fighting and winding up stuck in rocks. However, this was my first exposure to this backstory and, though we don’t get very far in to it so recounting my full initial reaction will have to wait till next week, it still felt like a massive increase in the scale and scope of the series unlike anything I’d read before.

If this was drawn by Delbo, it would probably be fairly ordinary, even with Furman firmly having gotten a handle on the American writing style as it’s entirely the set up part of the story. But with Senior aboard getting the chance to trip the light fantastic, it becomes a visual masterpiece and hugely engaging.

"I think the best way to represent the shocked joining of minds is to make everyone look like they have Parkinson's"
As I’ve indicated over the last few weeks, Silverbolt is my least favourite part of ...Perchance to Dream. As heavily indicated by the next cover, I suspect up until very late in the day this was going to be a Jazz story and when Hasbro UK asked/insisted on some promotion for the Special Teams re-releases something had to be thrown together quickly.

As with the last two weeks, Furman hits upon the idea of taking a character trait that is often played for laughs and treating it completely seriously. In this case, Silverbolt's fear of heights. So, clearly at some point after Arielbots Over America! but before they’ve combined after their personalities have been fully switched on, Menasor is attacking a G.B. Blackrock plant as a lesson in not messing with Transformer affairs (two weeks in a row he’s been mentioned, I wonder if Furman was already thinking of bringing him back?) and Silverbolt and friends have been tasked to deal with him. Which is a nice unstated callback to the Blackrock/Autobot protection racket.

Silverbolt has his mind on other things, his fear of his team mates finding out he’s scared of flying. Unfortunately they have to combine to deal with Menasor (against Prime’s orders. If there’s one lesson from this story, it’s listen to Prime) and the others all find out. With Silverbolt being so embarrassed and enraged at this shame he looses his shit and starts throwing Menasor about, even with it risking human life and... 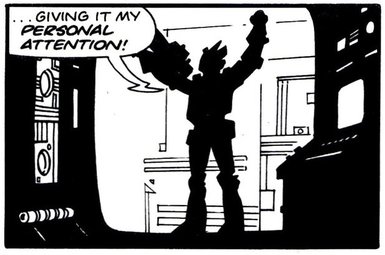 "What if we cover most of the gun arm with a speech bubble? That'll hide who it is, right?"
And that’s where Furman clearly run out of time and couldn’t come up with an ending for this last second replacement story. So the mind reading bug has broken down and Mr Mystery (who we get a full body shot of, he does look familiar) is mightily pissed. Even though the ending requires a cut-off, I suspect the Jazz story would have at least offered some resolution to whatever was conflicting him.

The final twist though is that the bugs haven’t just been recording the dreams, they’ve woken the dead Autobots up! And they’re as confused as anyone as to what’s going on.

This was always going to suffer from having to feature two combiners rather than focusing on just one character, and Silverbolt simply isn’t that interesting. This could have been salvaged if it had been intended to fill this slot from the start, but it’s so ridiculously rushed in both scripting and art (from a long absent John Stokes. Note how on the final panel he has science guy Wheeljack as far away from the bug as possible when it makes more sense he’d have grabbed it off Silverbolt straight away) and the lack of an ending is so annoying it completely underwhelms. 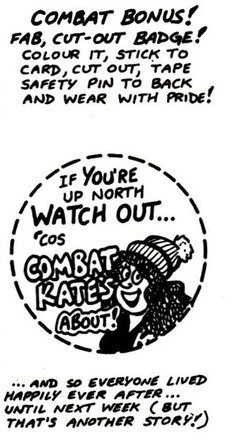 I was Up North last weekend and didn't see her about.
This issue originally came with a free sticker, though as mine is missing it and a quick Google didn’t come up with a cover that had one attached I can only guess what it looked like. Transformation is very proud of it though, as it is of the forthcoming poster and competition.

Combat Colin plays up the battle of the sexes as he initially tries to get Combat Kate to stay out of harms way, only for her to reveal she has a boxing glove on a spring in her shoulder bag. Colin does come up with the final solution to deal with mud men—a water cannon (“He’s discovered our weakness!”)—but overall it’s a fairly even team up. This impresses Colin enough that, even with Howard’s scheme exposed, he offers to divide the country up between the two of them. Kate will take “Oop North” and Colin “Daarn South” (according to his handy map). Howard meanwhile is called in by his publisher, and for making up malicious stories about people he is made editor of his paper.

And if all that wasn’t enough, there’s a Combat Kate cut out and colour in badge!

This has been a great world building story, taking various old story elements (and there’s a hint of a future one as Colin wonders what the Brain’s former henchmen are doing without him) and crafting a delightfully funny epic feeling romp that has a nice bit of edge with the scathing view of tabloids. And the publisher totally has a poster of a topless woman on his wall as well. 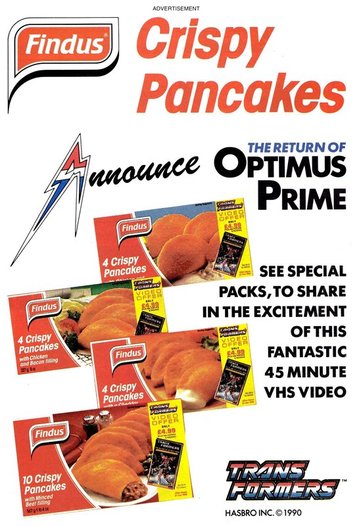 I love the formality of "Announcing" this.
Dread Tidings opens with a plea from Dreadwind that kids only need to send in a list of the comics they want swapped for the Comic Exchange, they shouldn’t be posting him big parcels of back issues.

He also handily explains the VVH to Chris Smith of Wiltshire whilst vaguely implying the electrodes might be attached to some pretty nasty places on the stubbies (“Certain highly sensitive areas of the nervous system”). Though that’s probably preferable to the plan B of Max Bygraves records.

Anon (great name) from Coventry points out the Sun review of the Michael Caine Jekyll and Hyde claims The Incredible Hulk stole the idea. Dreadwind counters that, as Jekyll was basically a transforming human, Robert Louis Stevenson was likely inspired by meeting some Cybertronians!

Dreadwind Fails to Answer Questions Properly! hasn’t been such a thing lately, but we get a nice one as Rudi Sheridan of Co. Cork Ireland asks where Ultra Magnus is. Which just gets a plug for the Target: 2006 Collected Comics.

Almost nothing happens in G.I. Joe: The Action Force this week beyond Billy meeting Hawk and Raptor realising the language centre is a bit suspicious.

Most excitingly of all though, Findus Crispy pancakes “Announce The Return of Optimus Prime” as special packs will let you buy the video for just £4.99!

Rather sweetly, both the NEXT panel and Next Week pages are incredibly circumspect over who will be the featured character in the final part of ...Perchance to Dream. It’s nice of them to try and pretend there’s some mystery, and I’m sure all this effort won’t be ruined by the cover to issue 260 just flat out telling you who done it. 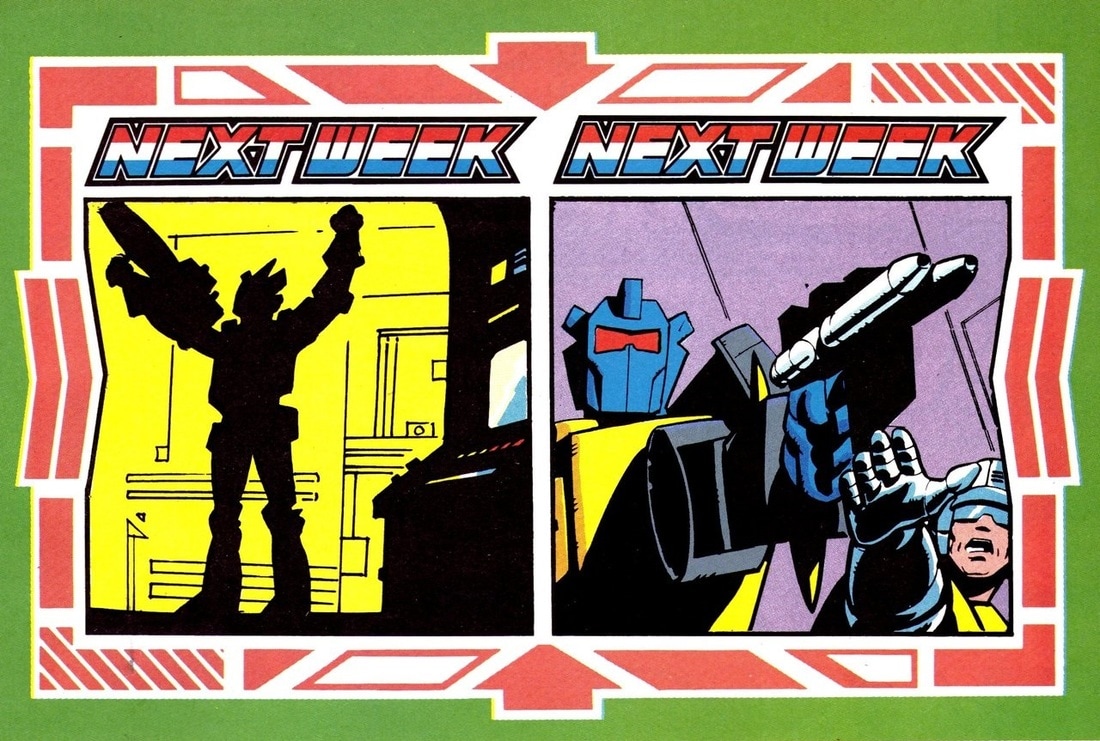