There's Got to be a Way to Blockbuster. 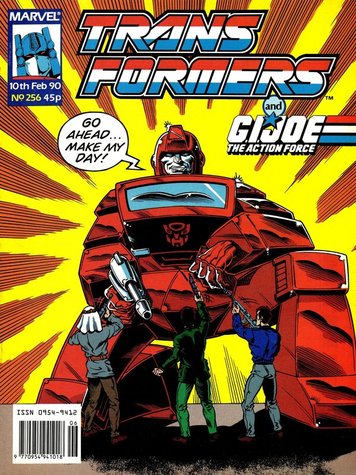 
Leave it to the professionals in future, huh?


Of the six Perchance to Dream stories, Ironhide is probably the one that stuck in my mind the least. Silverbolt manages to stand out for being fairly terrible, but the second part has always struggled to make even a negative impression.

As such, I was initially worried when I saw the cover, with Ironhide quoting Dirty Harry at Middle Eastern terrorists. This trope of late ‘80’s and 90’s action films has of course aged badly thanks to real world issues you may have noticed, and as I couldn’t remember a thing about how they were portrayed within I was worried there would be a degree of discomfort in reading this through 21st century eyes.

Rather than reveal whether this is the case straight away, I’m going to hold you hostage as I quickly talk about the colour strip. The breaking up of Worlds Apart! actually works surprisingly well so far, with this quarter feeling like a self contained unit picking up after the fight and focusing on the Autobots/Nebulon argument and their infiltration of The Fortress of Despair before hitting the original cliffhanger.

One thing to note about the British story is it doesn’t have a Perchance to Dream title card, instead simply being called 2: Ironhide. It will be interesting to see if this continues throughout the series or was just a mistake this week. 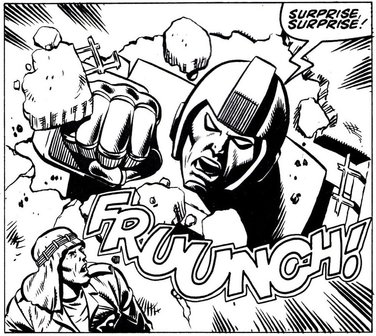 Cilla?
One thing that never really sunk in as a kid was how dark this story is. Terrorists have taken some innocent people hostage after a bungled police operation and are going to kill them all if they’re not allowed to go free, which isn’t going to happen as the cops prepare to make what will clearly be a disastrous raid on the building they’re in. That’s pretty bleak and serious for a kids comic about giant robots punching one another, even if the idea that such terrorists do have goals beyond killing civilians seems rather quaint now.

We’ve had humans killed (though often off stage) before, but nothing as visceral as fanatics pointing guns at hostages with their hands on their heads. It’s an entirely different sort of Transformers comic to any we’ve had before.

Ironhide’s response is equally pragmatic, he’s pissed off at the response of the authorities and decides to use the element of surprise, bursting through a wall, knocking all but one of the terrorists over with one punch on the ground and very nearly talking the remaining, grenade holding, leader of the group down (which, again, seems a bit naive now). But when the police burst in anyway, Ironhide straight up kills the guy with liquid nitrogen. Which I think is our first ever unambiguous on panel human death in the comic. And it’s done by an Autobot.

Surprisingly this only occurred to me on this reading. As a kid, and in every occasion reading it since, I just assumed the guy was temporarily frozen and would get better later like he’d been zapped by Arnie’s Mr Freeze. Which is blatantly not the case. That’s pretty brutal and should have made this story far more memorable than it wound up being.

I think the reason why is twofold. First, the other Perchance to Dream stories fill very specific gaps in continuity, you can place them to within a couple of months of when they’re supposed to be set, often to the exact issue and in the case of Prowl even between panels. Ironhide gives no clue as to its placement, it could happen at any time prior to The Underbase Saga, at best you can narrow it down to previous to the Ark taking off again as it would be easier for Ironhide to sneak off against orders when it was on the ground than flying about after those bloody kids.

Quick! Kill him before he can say anything controversial!
As such this doesn’t feel quite as special and nostalgic as the other stories with their callbacks and references to the olde days. Effectively it’s just a more traditional story that just happens to feature a character we’ve not seen in a while.

The other is that a low level human threat, however much darker and more real world than we’ve seen before, isn’t that much of a challenge for a Transformer. Which is probably why we don’t see more of this sort of thing even in the modern comics. As a child not really aware of the more serious real world problems being touched on, the averageness of the battle would stand out more than what exactly Ironhide is fighting against.

It also has to be said that Ironhide’s reaction to the police—to berate them for ruining a plan they had no idea about—is rather petulant as well. Still, it’s enough for Mr Mystery (who has a very familiar shoulder) to be impressed by and to put Ironhide on his list.

This is actually a much stronger story than I’ve ever given it credit for being, though not as fan pleasing as the ones either side and fairly low key, it’s a nice solid serious story. And thankfully—considering it could have been a disaster—the Middle Eastern terrorist angle isn’t as horribly dated and offensive as it could have been. Mainly because Furman is incredibly vague about their motives and origins (they’re only even called terrorists in one panel) and they have very little dialogue meaning stereotypes are kept to a merciful minimum.

On art, Staz does another strong solid job, with the panel of Ironhide bursting through the wall being especially impressive. Though I’m not sure why all the hostages are topless apart from leather waistcoats and baseball caps. They look like they were on their way to a Pat Lee convention. 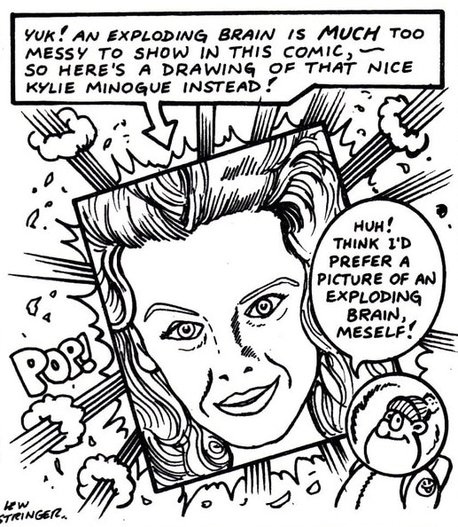 Especially for you.
Transformation promotes the newest Collected Comics, which it’s proud to say will be the first of several issues reprinting the much demanded Target: 2006. This will not go well. It also reassures readers that AtoZ will return as a more regular feature after being absent for quite some time.


Combat Colin concludes his adventure in space with the Brain asking for ultimate knowledge... only for the result to make his head explode. Not that we’re going to see any of that, so Lew Stringer draws a nice picture of Kylie to cover the brains flying everywhere. Which makes Colin declare he’d rather see the brains.


Pyramid Head grants Colin’s wish to go home by fixing the Combat Ship, and waves him off with a threat that one day he will come to Earth and judge humanity. Colin promises to have some beetroot sandwiches ready. This has been an amazing story, funny and visually iconic. It also ends with a narration box hinting things will not all be well back on Earth...


Following the blowing of the end of Yesterday’s Heroes a few weeks ago, Dreadwind again decides to print a letter from someone wanting to smugly reveal they’ve read some of the American issues as David Grew of Burton on Trent writes in to tell everyone Primal Scream ends with Unicron learning the location of Cybertron and is followed by a Matrix Quest. Was it really worth it for the ego stroking of being told how great the UK creators are on the book? Dreadwind even says not to say too much for UK only readers, but didn’t think to just not print the letter!


After so many examples of Dreadwind Fails to Answer Questions Properly!, often on fairly recent matters, it’s amazing he manages to answer a question about Robot Master from Graham Libaert of Fleet entirely accurately. How is he better at things that happened three years ago than within the last few months?


G.I. Joe: The Action Force has Raptor go chasing after Billy and Jinx so he can kill a potential witness to their Cobra Commander murder. The net result being that his birds get car sick and the people he’s chasing seem completely unbothered by any threat he poses. That and it turning out the Blind Master likes the Beastie Boys are more fun than Stalker continuing to show his humanity on the train to the Gulag.


Next week, no pictures of Kylie sadly, but someone almost as pretty takes centre stage. 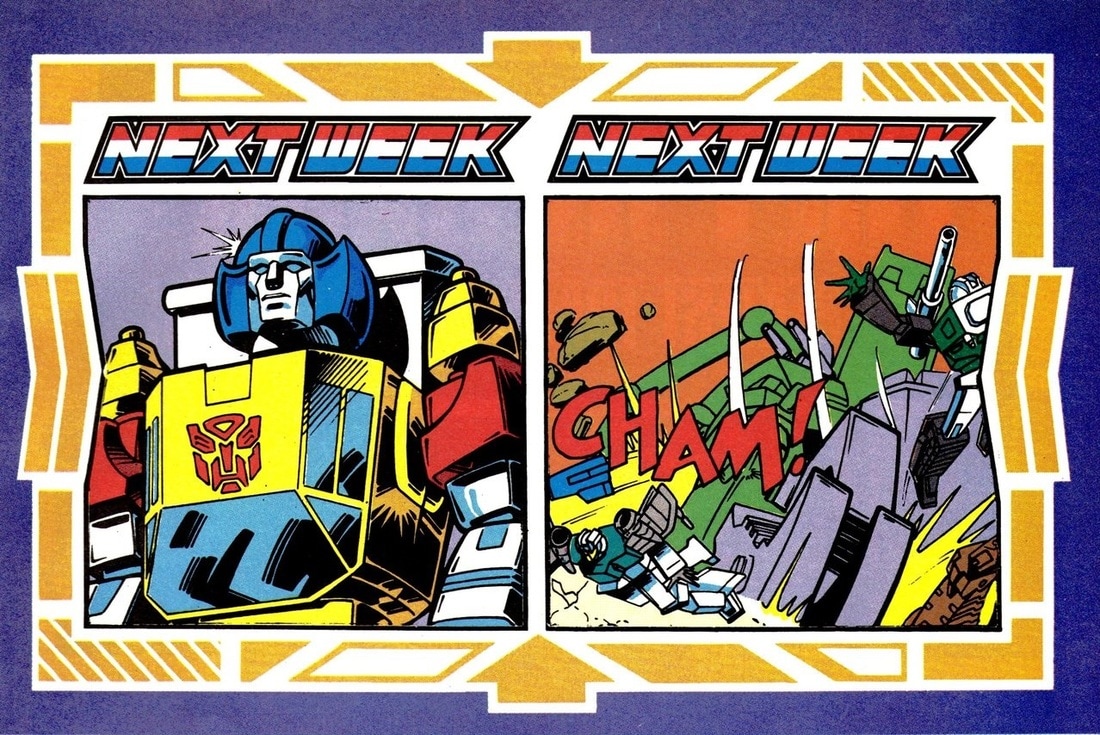