One Life For Yourself and One For Your Dreams. 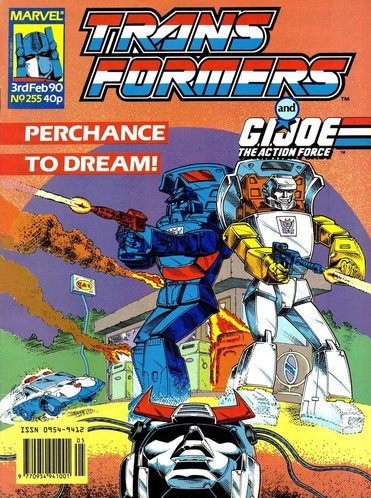 
We’re really into the home straight for the original British stories now as their final phase kicks off this week. Though the term won’t be coined for a couple of months, this is where the Earthforce era begins. A little continuity cul-de-sac designed to let Furman both free himself from the increasingly difficult (due to reprints) task of tying things in to the American series and to promote local re-releases of old Transformers toys under the Classics banner.

The odd thing is, as a kid I remember Earthforce lasting forever, when in fact it’s only a matter of months. Presumably the far longer feeling reprint that will accompany most of it (and which will get a good kicking when we reach it) warped the nature of space time around the entire comic.

Before that though, there’s an emergency reprint to deal with. Considering it was pressed into service at the last second, Worlds Apart! Is actually a fairly smart choice. It’s almost unique amidst the British stories in not connecting directly to anything else around it at the time (despite in theory happening in the middle of an American issue) and therefore can be presented again three years later with no fear of being confusing or off-putting to new readers unfamiliar with the plot status quo.

This first chunk of the original opening takes us to a neat new cliffhanger of Weirdwolf pouncing on Hardhead. Which, along with the aforementioned accessibility, made it the most engaging of the reprints to this 9 year old since Wanted: Galvatron Dead or Alive ended with Bumblebee exploding in a way that was never followed up on. So, job done. 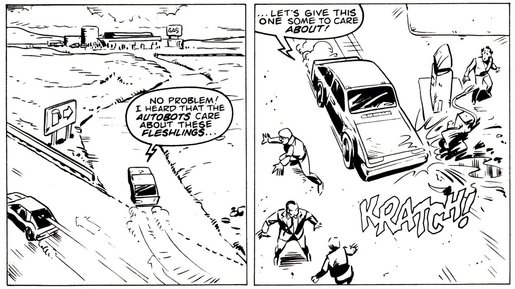 I've missed these guys.
As noted, Perchance to Dream begins an era where continuity with the American series is no longer a concern. However, much of that debate and how things can still be smoothed over if you’re so inclined (like me), will have to wait for another day as this isn’t immediately apparent. This is because Furman may be shrugging his shoulders with regards to his own work, but he’s still going to actively tie this new mini-epic in to old stories. Indeed, in an almost complete departure from how they’ve been treated by the UK team for the last few years, he’s going to be feeding in and out of Budiansky’s work.

This is because of those aforementioned old toys coming out in the first Transformers reissue range. The appetite was somewhat stronger in the UK than the US at this point, so this was presumably down to local Hasbro wanting more product to put out and being aware the people not old enough for them the first time were still getting a good dose of advertising from the various VHS rental tapes.

Though them being called Classics is interesting in and of itself, as with the Classic Pretenders and a lot of the forthcoming Action Masters there’s a clear feeling that Transformers has passed its golden age and looking back to try and recapture that is something Hasbro is increasingly going to fall on as the various new ideas and characters they attempt fail to take hold. 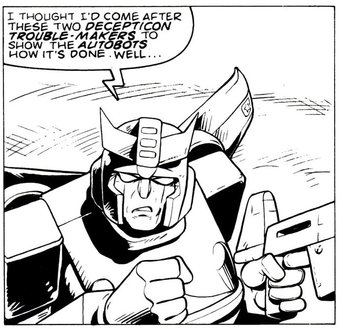 "Mike Costa, I'm coming for you!"
The net result is that five of the reissued Autobot toys (which feel rather randomly selected) are going to get the Aspects of Evil! treatment. In this case, a Mysterious Someone (who will fill the sixth issue) is going through the corpses in stasis on the Ark and using a literally bug shaped bug to look into the memories of the deceased for candidates for...something.

Starting with Prowl. A character who, along with nearly everyone about to be featured, is considered a “Classic” by fans because he was there in 1984 but has done very little since to become an actual character. He biggest moment probably being in Crisis of Command a whopping five years ago. This era (and it’s something that will bleed into the American stories thanks to their separate new-old toys to promote) is where these guys really being to shine on their own terms.

And Prowl on his own terms is pissed as Furman answers a question I pondered way back in Decepticon Graffiti!: Why did the Autobots do nothing about the widely covered by the press rampage of Runabout and Runamuck?

Well it turns out it was noticed and Prowl went rogue to deal with it. Which seems to lend itself to an obvious plot: The two Decepticons were written as Bevis and Butthead and Prowl is the logical square guy. That’s your basic episode of Saved by the Bell right there. 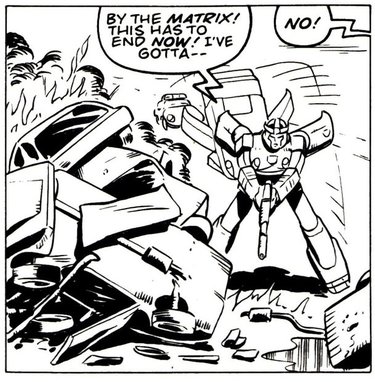 "The continuity must make sense!"
Instead Furman takes things in a more interesting directions. The Battlechargers are in character and have some nice quips (“Do I detect a certain hostility emanating from these vehicles?”), but they’re just the sideshow causing the destruction that is the catalyst for Prowl becoming completely and utterly pissed.

So whilst chasing them across America, Prowl sees them run car after car off the road and—when they finally spot him—they go to the effort of blowing up a gas station in his face. Prowl is only coming after them in the first place because he wants to “Show the Autobots how it’s done”, and this indignity has him decide to screw the rules and take the ‘Cons out. Which causes more death and destruction and Optimus Prime showing up to go “WTF dude? We don’t endanger humans!”, which makes Prowl think black thoughts and put him on Mr Mystery’s mystery list.

The surprise villain (who loves Shakespeare as well. Handy for a title drop) does have an oddly familiar looking arm though. Hmm.

This is a fantastic story, coming straight out the gate with great action, comedy and pathos. Plus an intriguing mystery as to the why of what is happening, if not so much the who. As this would have been my first real exposure to Prowl as a character rather than just the guy WHO GETS SHOT AND SMOKE COMES OUT OF HIS EYES in the film, I think this explains why I’ve never really gotten on with the ridiculously rigid IDW take on the character. My Prowl is a hard as nails pissed off bastard.

Wildman also does a very strong job on art, the backgrounds are still fairly empty but the facial expressions and crashes are all well staged.

Stop complaining!
Transformation is all ready for letters on the sidebar as readers are told not to write in to ask about what happened to Primal Scream!, it’s just deadlines sadly. Right below this though we get a good sign of why sales are heading towards the point home-grown material will soon be ending as Dreadwind actually begs those self same readers to write in with anything, anything at all, except complaints. Or at least if they could be constructive complaints...

Speaking of which, Gareth Bartaby of Cleckeaton sets a fine example by writing in just to say the comic is COOL. And to ask why Flattop was an Autobot in issue 245 when the Micromaster is a Decepticon. Dreadwind Fails To Answer Questions Properly by stumbling through an explanation about the Autobot being a pathetic clone. Surely “All the good names are taken” would have done?

Mark McNaughton of Penryn goes one better than “COOL” with a letter full of slang that makes you feel he’s a lot older than the typical reader as it comes across like a middle aged middle aged man trying to write Ace in Doctor Who. “Hey! Yo! Check this out (yes I am a freak!)” indeed. The jist of it is that long forgotten rap/house music star Derek B (I’m sure you’ll agree, Derek is the most rap name ever) has name-checked Omega Supreme and the Autobots in one of his albums. Good for Derek.

Combat Colin is, by comparison, an oasis of sanity as the fight between Colin and the Brain is interrupted by Pyramid Head. A cosmic being with a pyramid for a head. And six arms. And also a tasteful tanktop. All in a nod to the Living Tribunal from Doctor Strange. 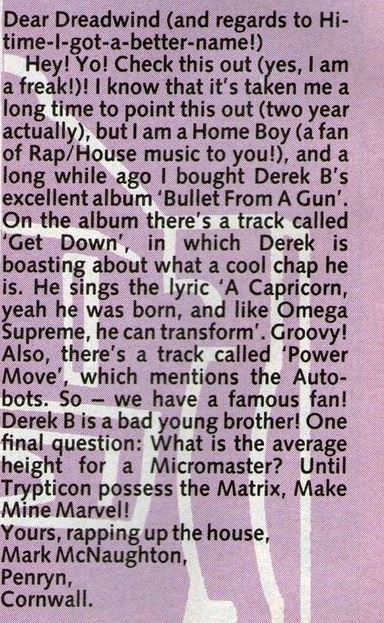 Gordon Bennett.
As Pyramid Head is in a good mood he offers them one wish each, and whilst Colin tries to decide between a CD player and a shed full of comics, the Brian decides on Universe conquering Ultimate Knowledge! This is a tremendously fun instalment to be reading the week Colin turns 30.

G.I. Joe: The Action Force sees the disavowed Joes on the way to a gulag, but the silly highlight is in the return of the Billy/Dead Cobra Commander/Fake Cobra Commander plot. Or rather the moment where Billy is shown a family photo of all of Larry Hama’s favourite ninjas, including a mystery one whose face is always blurred in photos.

This will, I shit you not, turn out to be the previously (and subsequently) not even remotely a ninja Firefly. Whose special ninja power that stops his face being seen in photos is to shake his head about as the picture is taken. This is where the whole ninja thing really becomes silly in the extreme, though I don’t think Transformers will get round to reprinting the full explanation before the end. I just wanted you to know.

And if you also want an example of Hama’s contempt for non-ninjas, we get an example of an odd and awkward running trope of retired Joe Clutch trying to start his own sub-plot only to be told to fuck off by the other characters.

Now, if you start waving your head about really fast right now and you are a real ninja you’ll go a week into the future to see what Ironhide dreams about. 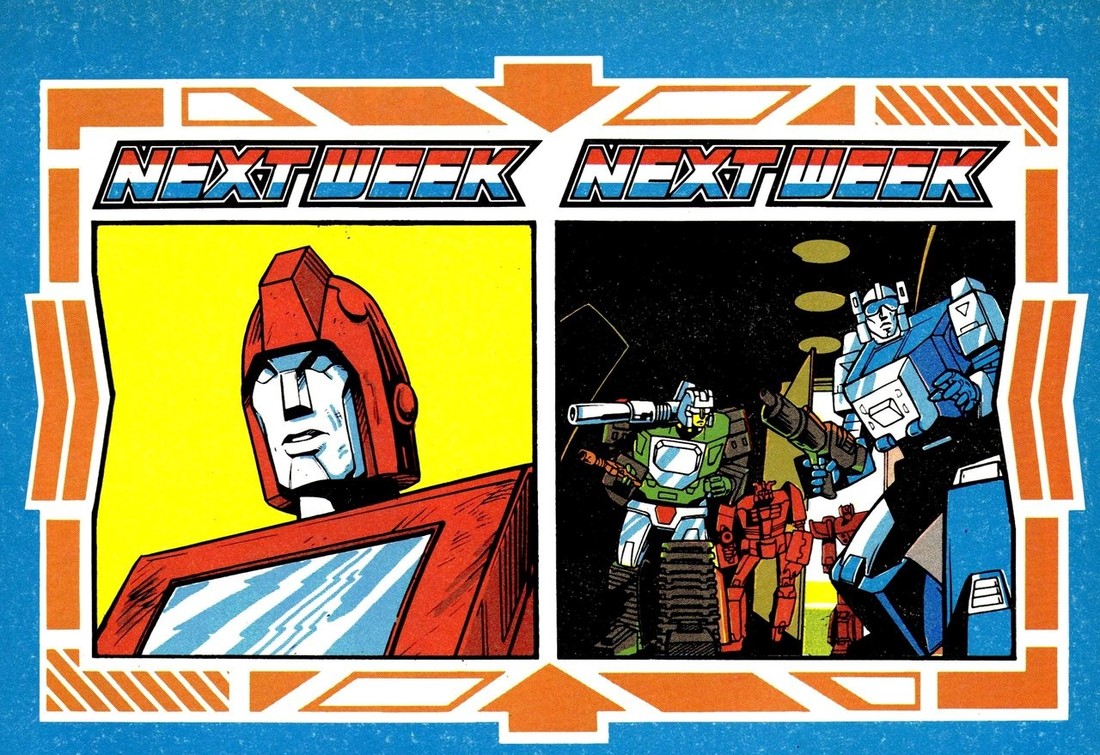 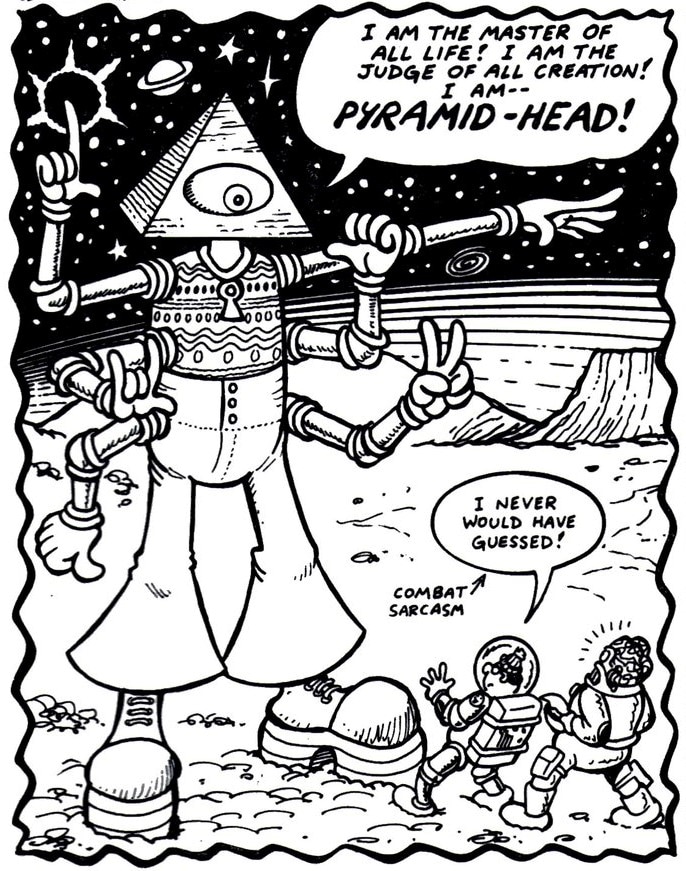