Save the Darkness, Let it Never Fade Away. 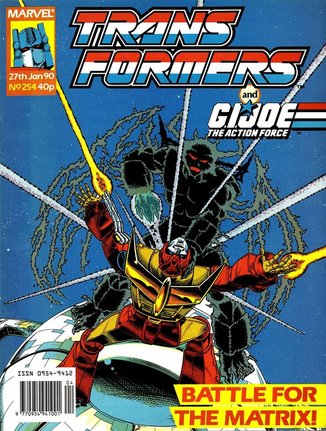 
You know, that’s the first time I’ve heard someone cite the Transformers legendary progenitor in many a year!


Close to three and a half years after Target: 2006 introduced us to the 21st century cast and just after a year since their major storyline ended, we’ve reached the final issue for Rodimus and friends. Thanks to the timey-whimey story order it’s not their last chronological appearance, that would either be the bleak hopeless conclusion to Aspects of Evil!, or the bleak hopeless conclusion to Peace depending on whether you count that as occurring at the end-point of this new post Time Wars future.

But as much as the back end of the issue is about endings for the British stories, the front end is about new beginnings for the American as ideas and concepts that will take the series to its conclusion are introduced. 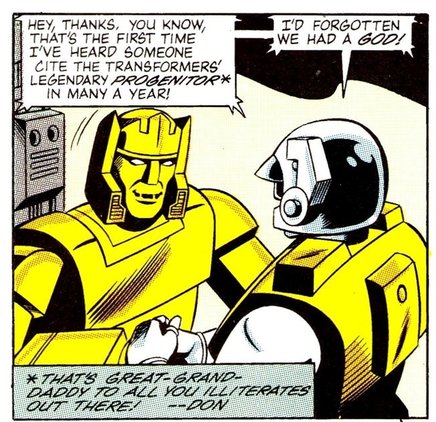 "Who are you and why do you dare to touch me?"
As such, the third part of Yesterday’s Heroes! gives us in rapid succession the resistance headquarters in Iacon and Emirate Xaaron. Who is so excited at having made it to America with his design intact he’s painted his head gold. The new one colour only scheme certainly isn’t down to Yomtov’s failings, I don’t know why you’d even suggest that.

Though he’ll go on to be a key part of Furman’s US work, Xaaron starts off somewhat out of character. It’s impossible to imagine Bumblebee warmly hugging Xaaron either before or after this issue, nor the toaster mouth invoking the name of God as he wishes the three Pretenders good luck. Complete with a grin that’s frankly terrifying.

This entire sequence is so clunky it feels more like editor Don Daley had a hand in writing it than Furman, who is normally more elegant at dealing with exposition and bringing readers up to speed. So Bumblebee helpfully responds to the mention of Primus with the above quote (the idea no one talks about their God any more undone by Optimus having just brought it up in the last arc) before Grimlock suggests that, hey, maybe God is sleeping and just needs waking up? There’s even a horrendously patronising editorial box (which is all Daley, the UK team handily don’t change his name-check despite the fact they used to do so) explaining what progenitor means in the most basic way, something Furman definitely wouldn’t have bothered with.

Things do improve as the Mayhem’s (following a specially irradiated batch of fuel) burst in and Bludgeon cheerfully decapitates the technician working the transporter with a “Pardon me!”, with the net result being all the Pretenders are beamed...somewhere.

Which was lucky for Bumblebee as Xaaron was going to arrange an “Accident” for him anyway as revenge for the hug. 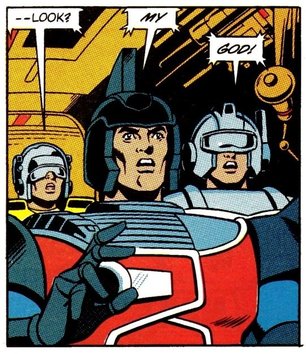 The God of Dull Surprise presumably.
We then resolve the Prime plot. Though Delbo has some fun with a full page of Prime beating the hell out of the Guardian robot, this otherwise ends exactly as you’d expect. Hey, Optimus now knows you honour the memory of the dead by carrying on! Well done Prime, what an insight.

The issue ends with Classic Pretenders (and unbeknownst to them, the Mayhems a short distance behind) in what the British will recognise as one of the Cybertronian sewers from Headhunt, but a lot deeper as they are in the centre of Cybertron and face to giant face with Primus!

No one could have expected that.

I mean, apart from the clunky foreshadowing making it obvious. And the letter just straight up telling you this was going to happen last week.

There’s not much here this week, just being about getting the characters into that big Primus room. The Prime plot flat-lines (and its annoying there’s no mention of consequences for Hot Rod nearly getting everyone killed) and Xaaron is so unlike himself there’s very little to actually enjoy. Delbo makes a decent fist of it though, almost as if he knew what was coming in the next American story and knew he had to raise his game. It’s especially nice that, despite just being a face, Primus still looks like Rodimus. 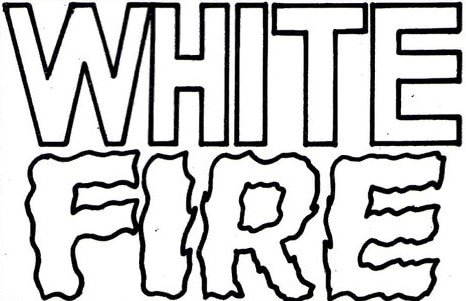 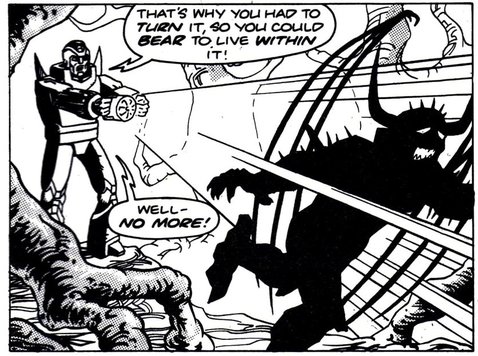 "And don't come back you...whoever you are!"
Speaking of whom, back in 2010 for one last time, Kup is looking for reasons not to fire as Prime shows signs of fighting back as the Matrix opens up and a bright light, or White Fire if you will, comes burning out of it.

Inside the Matrix, Rodimus has realised it has been tainted by his own self-doubt over their situation, allowing Mr Mystery to strike at his mind. Of course, back in Aspects of Evil!, the key was not to respond to provocation with violence so naturally...Rodimus starts punching the enigmatic foe repeatedly. And of course back in Legacy of Unicron! opening the Matrix within the mindscape would only make Unicron (oh damn, I said the “U” word, twice now!) stronger so naturally...he’s going to kill Unicron forever by opening the Matrix within the mindscape.

As flimsy as some of the thinking is, Cam Smith continues to make the inner-world interesting and nightmarish, with Rodimus looking looking like he’s on his last legs remaining effective.

In the real world, as the Autobots can’t decide if Prime is really fighting back or faking (during which Strafe dies as well), Kup is so keen to stop the bloodthirsty Arcee ordering the kill he pounces on Rodimus and rips the Matrix out of his chest on the assumption that’s what the problem is.

It is and Prime recovers...but thirty seconds later and he’d have killed Unicron forever. Which may be another reason for the character being treated so obliquely, he’s about to become the uber-villain of the series, it might not have been seen as a good idea to present him as so easily defeated. 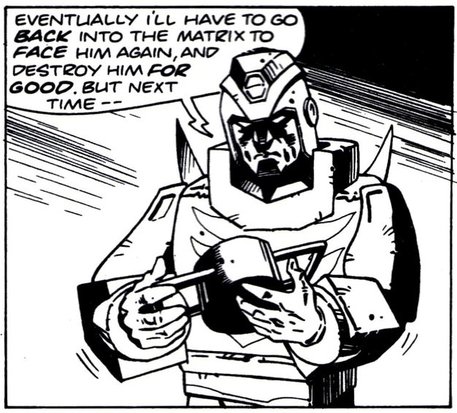 "Bring me a portable stove and let's make some beans!"
This ends the future stories on as bleak and hopeless a note as those I mentioned in the opening: Lots of their own people (and Longtooth) are dead, the Matrix is still tainted and there will never be any resolution to Galvatron’s taking over of Cybertron.

The last issue had to rush things through, but overall this has been a strong finale for this strand of stories, with Rodimus and Kup both being on strong form throughout and there being no shortage of memorable imagery. Smith (now getting a full surname) isn’t as impressive on the “Real” scenes as he was last week, but the surreal nightmare world is still mightily impressive.

It’s also, despite various attempts to make it more complicated by well meaning fans, the last story for which the continuity is straightforward. It flows naturally from the previous British stories and is set nice and simply in the new timeline created by the events of Time Wars. From next week, Furman is going to start distancing himself from the bigger picture for simplicities sake and how things fit together is going to get as oblique as Unicron’s identity in this issue.

Transformation gives us the low-down on the new direction by telling us about Perchance to Dream, though oddly it doesn’t sound that impressed (“Remember Aspects of Evil? Well this is nothing like it!”), coming over as especially sarcastic about how you won’t be able to guess who the villain is.

What isn’t mentioned is the story we were promised last issue would be starting in #255, not because of our old friend Disdain for the American Stories, but because by the time this issue was put to bed they knew we’d be getting a reprint next week. Which is shown by the NEXT and Next Week boxes, but which Transformation carefully doesn’t bring up. A brief paragraph on the sidebar about Stephen Baskerville reads suspiciously like it was thrown in quickly to replace something about Primal Scream. 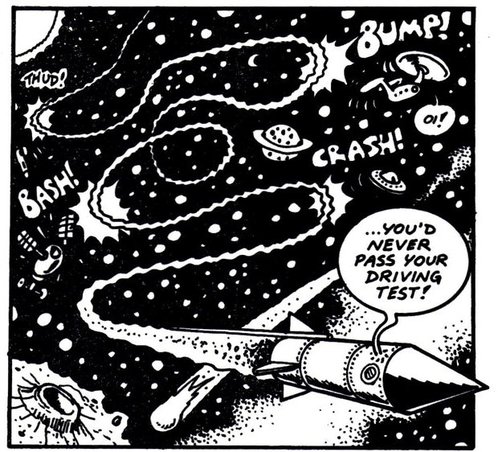 The final frontier.
Combat Colin in Space! sees The Brain attempt to fly Colin’s rocket, with mixed results including a near miss with the Enterprise. Colin’s wrestling back of the controls sees them crash, not in Birmingham, but on Mars! Leading to another cliffhanger as The Brain (whose ever changing badge becomes a Penny Farthing as a nod to his last story) starts strangling Colin. Best call on Captain Kirk for help.

In advance of next week’s new old toy push, Dreadwind gets a handy letter from David Baumann of Dunstable asking about the new Transformers Classics toys and if Megatron and Skywarp will be joining Wheeljack and Sunstreaker. All Dreadwind can offer him is Menasor. I suspect we are now past the point where the original Megatron could easily be released in the UK.

Mark Skitt From Northumberland (who has written so many unpublished letters he’s in danger of disintegrating if this one doesn’t make it) also helps with promotion by asking when the Battlechargers are coming back. Though he’s going to have a longer wait to see Reflector in a comic again.

G.I. Joe: The Action Force picks up on a storyline left over from when it was just plain old Action Force as the Joes captured in Madeupcommieland end their show trial and are sentenced to five years labour whilst still wearing their Joe costumes. Meanwhile Outback as to deal with prejudice from other members of the team who have no concept of need to know or secret orders and assume his refusal to explain is because he’s a coward.

The most memorable thing though is a gag about the pathetic communists faking a demonstration against the Joes that is obvious from the signs all being mass-manufactured. Which is the sort of thing you see at Trump demos today.

Next week, we go prowling through some Autobot memories. 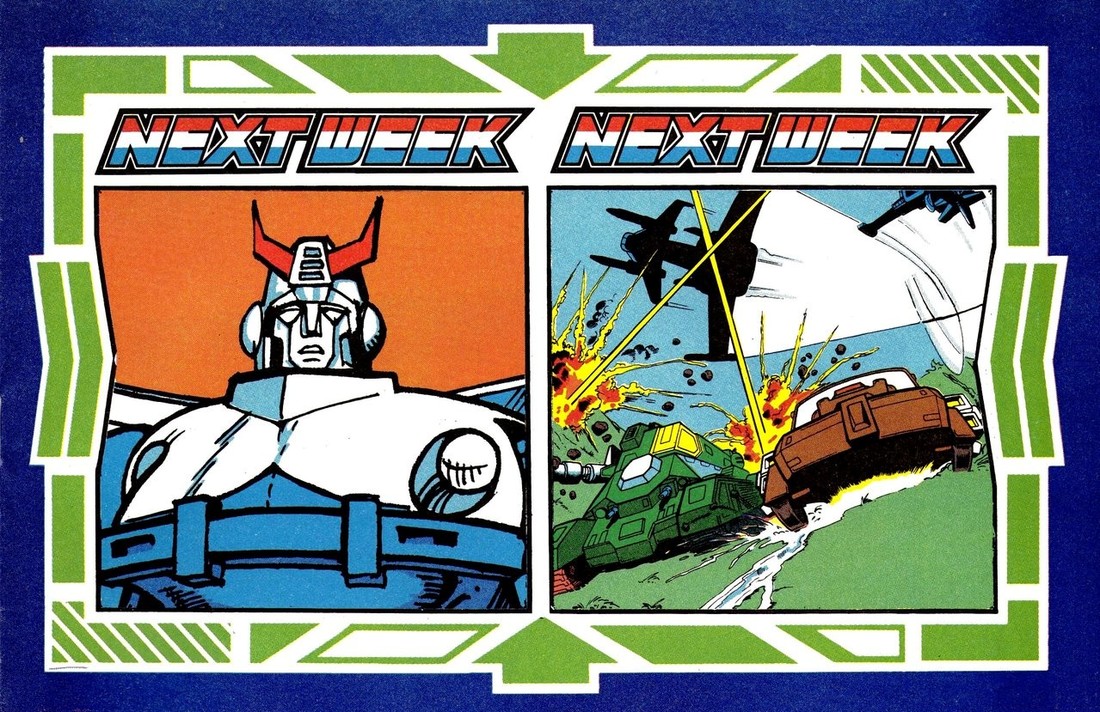