My Bad, Bad Angel, You Put the Devil in Me. 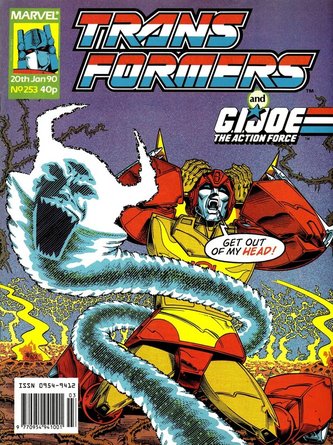 
The last thing we need right now is heroes!


*This was either changed at the last second, or a mistake was made by letterer Annie Halfacree when she created the title. See below for more...


Well credit where it’s due, Transformation manages not to ruin a single forthcoming cliffhanger this week. That must have taken real effort so well done to all involved.

No, they wait till the letters page before blowing future plot revelations. Oh well.

Scoop: I can't find the fuel!
Still, before that we have the second part of Yesterday’s Heroes! Which opens on a hilarious panel where the script direction was clearly “Hey Jose, I think we need to make it clear what the Autobots are stealing from the fuel depot”, so he draws Scoop carrying a large canister with the word “FUEL” written on it in massive, massive letters like it’s a comedy sign in an Adam West Batman episode.

The important information though is that the Classic Pretenders and the Autobot Rescue Patrol are now going to Earth because, despite Grimlock not being bothered about where he crushes Decepticons, they’re needed on the pale blue dot to replace the fallen and give a moral boost similar to the one they’ve achieved on Cybertron.

Furman is usually good at making smooth scene transitions that flow into each other, but his repetition of the word “Heroes” four times in two pages (including the title drop) as we cut from the Autobots to the Decepticon Royal Palace—hey, why not a royal palace?—is unusually clunky and heavy handed by his standards. But it’s here (via a bit of dialogue about how many fuel raids the Classic Pretenders have carried out copied almost word for word from Straxus in Resurrection!) Americans get to meet Lord Thunderwing and the much smaller Mayhem Attack Squad. Now only comprising Bludgeon, Stranglehold and Octopunch. I wonder what happened to everyone else?

It’s only one panel, but Thunderwing is far more credible as a leader here than in any of his more scatter-brained UK appearances, he’s got a good reason for wanting the Classic Pretenders dead—the moral boost given to the Autobots needs to be undercut—and whilst he’s fairly direct about his love of violence, he doesn’t feel like a guy out of control. His fall into madness is going to see a lot more plausible with just his briefer US showing in mind than the way the British stories make him look like he’d already checked into Loony Crazy Ga Ga Land.

The Mayhems don’t get to do anything beyond agree to do the job, but it has to be said they look adorable rather than threatening in their more toy based squat character models. 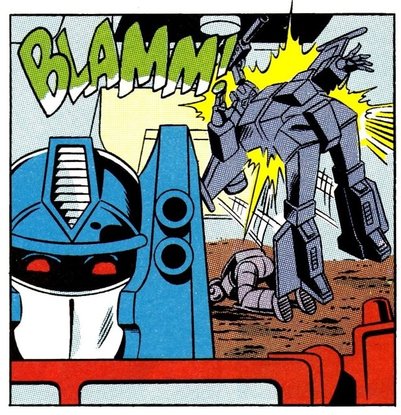 "Nooooooooooooooo, not my bessie Brainstorm!"
Sadly the rest of the issue is devoted to the Optimus Prime plot, which, after an interesting start, is now descending into silliness. The Ark lands on the moon so Prime can go for a walk to clear his head, basically telling Highbrow and Cloudburst to go screw themselves in the process.

Hot Rod however has a plan, and it’s one that actually makes some sense given Prime’s character. We’ve repeatedly seen it’s inaction that fuels his self-doubt, right from the first time it was explored back in Crisis of Command!. If Optimus is ever unsure of himself, give him something to punch and punch hard and he’ll get over it. So contriving a situation where this happens is a pretty neat bit of thinking on Hot Rod’s part.

Unfortunately he decides—in yet another crossover from the UK—to use a Guardian robot as the tool. Anyone who has ever paid attention to any of their prior appearances (and for those—like the Americans—who haven’t, Kup is on hand to quickly point out the flaw here) will know this won’t end well. And so, instead of a fake killing spree, the Guardian goes on a real killing spree.

Prime is initially prepared to keep on walking (as in Prey! he thinks the Autobots need to learn to cope on their own), even as Highbrow and Cloudburst fall to the Guardian. But as soon as it messes with Brainstorm, that’s when Optimus decides enough is enough. I bet you never knew they were such good friends did you? The issue ends with Prime returning just as Guardian—having removed Hot Rod’s hand—is about to move on to his head.

Despite basically moving pieces into place, the opening two pages are much more interesting than the remainder. The Autobots are just a little too useless in the face of one of their own tools, to the point it’s hard not to agree with Prime on them needing to learning to cope without him. Plus Hot Rod thinking any of this would be a sensible idea brings out all his worst qualities.

Delbo is not at his best on art this week either, as well as the aforementioned oddities Brainstorm being blasted out of the Ark looks like he’s done his back in attempting to do a Delbo Pose. It’s also a shame he wasn’t given any visual references for the Guardian robot as his made up heavily Robocop inspired design means the UK reference falls a bit flat. Luckily someone did manage to show him a picture of the two British refugees we’ll be meeting next week. 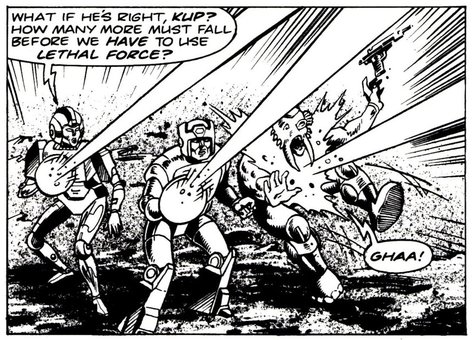 Is Ralph Burns firing that shot?
The most striking thing about our British story, Shadow of Evil, is the art. Cam S (aka Cam Smith, like Staz and Andy Wildman he won’t go full name until he’s a respectable comics artist) has inked a couple of stories before, but this is his first solo gig. And it’s extraordinary, especially the dark grimy opening page of dead and blasted Autobot bodies (including Getaway again).

The rest of the issue doesn’t quite live up to that, but it’s still unlike anything else we’ve yet seen in Marvel, and is probably the most strikingly different art début since Dan Reed. Character proportions are often a little off—look at Siren’s tiny legs on the splash page!—but for a dark and dirty story it mostly works very well.

The visuals are the main strength here in this story of two halves. The first deals with the Autobots doomed attempts to take down EVIL Rodimus with non-lethal force whilst he gloats about their holding back as he kills them (bye bye Longtooth). It’s quite striking visually, as is the fact it’s Arcee who is the one arguing for taking Rodimus out to save them all. We’ve come a long way from her appalling first appearance, now she’s representing one half of the argument about what to do with equal strength to Kup and isn’t letting her emotional attachment to the former Hot Rod prevent her considering her duty.

Kup on the other hand is procrastinating, but that’s in keeping with his parental role towards Rodimus and he agrees they will only hold back until the reinforcements from Autobot City arrive, giving the story a nice ticking clock element.

Who is that mystery baddy?
Meanwhile, in his mind Rodimus is running in fear from the Adversary, which is the sort of mental battle we’ve seen before (most recently in Two Megatrons!), but seeing Rodimus so terrified as the oddly familiar mental form of his foe engulfs him is surprisingly striking. Helped by the broken and almost nonsensical narration boxes.

It’s worth noting here that, even though it’s clearly visually Unicron doing all this as a sequel/prequel to Aspects of Evil!, he isn’t referred to by name anywhere in the story. It seems a bit of an odd conceit as there’s no ambiguity here otherwise, I wonder if this was an editorial decision? If things had gone to plan this story would have run straight into the American début of Primus and Unicron, was there a concern that seven straight weeks of the chaos bringer might be a bit too much? Or that brining attention to his presence here might remind kids that the story they were supposed to get next was a reworking of one they’ve already read two years ago?

Either way the issue ends in the real world with the reinforcements arriving, resulting in a great panel of a stressed Kup ordering everyone to shoot to kill.

Despite featuring some familiar tropes, this works very neatly and features some of the best nightmare fuel art this side of Cyclonus losing his head.

Transformation calls the British story Shadow of a Greater Evil, I wonder if that was an intentional change after the editorial went to print, or a mistake somewhere in the production of the strip? Meanwhile, the sidebar promises the start of a brand new American story in issue 255, Primal Scream, which it’s keen to emphasise has an entirely UK based creative team in Furman and Senior. I can’t wait for that.

No need to read next week now.
Unfortunately the desire to big up the British invasion of American Transformers sees Dreadwind print a letter that should have been held off for a few weeks, or at least edited. Darren Elwell of Blackpool has written in to say he’s read the American issues 60 and 61 and how much better they are than the British comic because it’s just Transformers, no G.I. Joe: The Action Force holding them back.

Oh, and hey, he didn’t know Primus lived in the centre of Cybertron! Cool, eh? Dreadwind cheerfully adds to the massive spoiler (after going “Actually those American stories are by us Brits so WE ARE BEST”) by spelling out Primus is the core of Cybertron rather than just living there.
Blimey O’Reilly.

We haven’t had a list of Every Transformer sent in for a few years, so it’s nice of Mark Robinson of Bridgewater (aged 17 ¾) to oblige with an updated version. Dreadwind won’t print it, partly due to length and no doubt partly due to it not ruining any forthcoming stories. Still, I hope Mark is currently having a productive time editing TFWiki. Dreadwind also says there’s enough new AtoZ’s to potentially make for a second Universe book, but this will never happen.

Speaking of AtoZ, this week it covers Scrapper and the mini-bot Prime wouldn’t waste his Matrix energy on, Seaspray.

Combat Colin starts a new multi-part story where the Brain is tired of constantly failing to take over the Earth and wants to go back to space on what turns out to be the same day as Colin is testing the new Combat Rocket. Leading to a great gag of Colin failing to realise Semi-Automatic Steve is suddenly a lot taller and brainier looking until after they’ve taken off.

G.I. Joe: The Action Force concludes its current story with an obvious editorial change to the script. As Cobra throw a grenade at our heroes the homeless veteran throws himself over it...and presumably was supposed to be killed in a gut wrenching (literally) explosion. But that’d be a bit strong, so it turns out to be a dud and he has a heart attack instead.

The entire plot turns out to have been a feint to get Cobra access to New York’s phone lines, so they can set up scam pyramid and insurance schemes on the unsuspecting public with cold calls. Which is a less interesting thing for terrorists to do than actual terrorism. Still, based on my experiences over the last couple of weeks, I can only assume they run Hachette’s phone lines as well.

Next week, two Prime’s in two fights to the reaffirm their character! 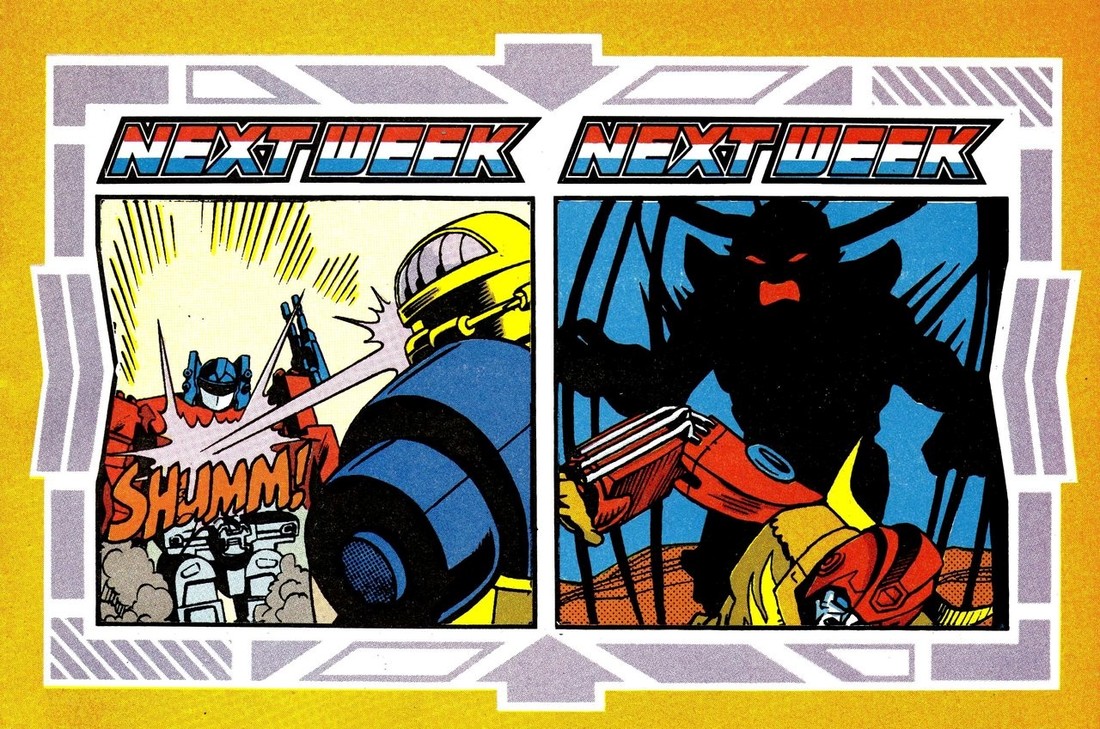