Someone Who Who Thought That You Could Trust, Was Just Another Way to Die. 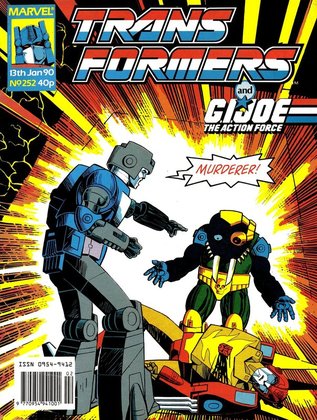 
That cover man, that cover. It has everything. Kup shouting “MURDERER” at Longtooth. Who is both doing jazz hands and seemingly a massive fart. Whether it’s this or the murder accusation that is causing the mildly confused expression on his face is hard to tell. Gary Erskine might as well have given up on comics after this, there’s no way he could have ever topped it.

It is however bizarre that the cover goes out of its way to throw misdirection on Longtooth as the saboteur, when the very next page cheerfully blows the cliffhanger to this issue’s UK story. Yes, Transformation doesn’t hold back, opening with “RODIMUS PRIME—SABOTEUR?”, before deciding that the question mark might be too ambiguous and so spells it out by calling Edge of Impact the second part of “What we call our Dark Rodimus epic”.

It’s comfortably the worst editorial decision in quite some time, which considering that Euan Peters stewardship has been somewhat uneven is quite impressive in and of itself. It’s certainly a great way of removing even token suspense and tension from the cover story. 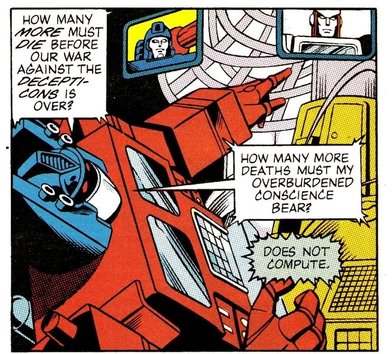 "How many more times must I do the Delbo pose?"
Before we get to that though, the American story opens by following up on the events of last issue. Yesterday’s Heroes! sees Furman really start to bring ideas and concepts from the UK series over the Atlantic in earnest, starting with the idea of Optimus being conflicted and self-doubting. This is nothing new to British readers—we had an example of it only two weeks ago and this very much borrows from the start of Prey!, down to Optimus bemoaning his uncertainties in front of multiple TVs—but for out American friends this look at Prime’s inner torment must have felt fresh and interesting in comparison to Bob’s fairly disinterested take on the character who tended to casually drift in and out of stories as a more generic hero.

The catalyst of Prime’s anguish is the death of Ratchet. They’ve never seemed especially close before, I can’t think of any notable moments between them since the Prime’s Head arc, but as two characters who’ve been around since the start it feels natural that amidst the list of casualties the Ark’s computer reels off (not Powerglide! Nooooooooooooo!) it would be the one with the longest association that really hits home.

The loss of Ratchet, plus so many others recently, means Prime is now feeling the full weight of being responsible for so many lives, and as he starts to wonder if the losses outweigh the marginal victories, is it time to give up? The computer certainly thinks so, but Auntie has always been a bit of a cow. The whole thing certainly scares the hell out of the eavesdropping Kup and Hot Rod. 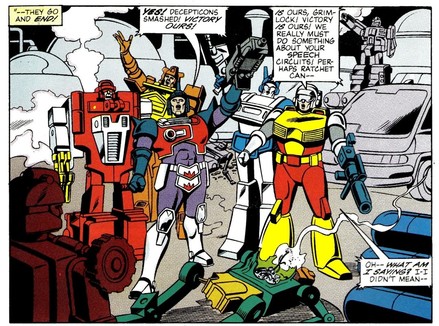 Only one of these Autobots was any good at the Nazi salute.
On Cybertron, things are going swimmingly in a sequence (ironically considering the A plot) reworked from how the return of Optimus rejuvenated the resistance and led to many successful fuel raids back in Resurrection!

Oh, OK. It’s actually the Classic Pretenders. Bravely leading both the aforementioned DTs and the Micromaster Rescue Patrol (again, putting the only doctor the Autobots have into danger) they’ve successfully turned the tide in the war on Cybertron. Bumblebee thinking how great it is not to be seen as small and weak any more isn’t especially interesting as Goldbug was never treated as worthless by anyone other than Blaster, but the end of the issue where he suggests Ratchet might fix Grimlock’s voice glitch before realising is a nice, human touch and shows they’re hurting just as much as Prime. Indeed, possibly more as they were not only equally old friends of his, but are only alive at all because of the chain of events that killed him.

Despite some very familiar plot elements, this is a strong thoughtful opening that is perhaps the first US issue of Furman’s that feels as if it couldn’t have been written by Budiansky. Especially as this is very much his version of Optimus moving into the central seat. 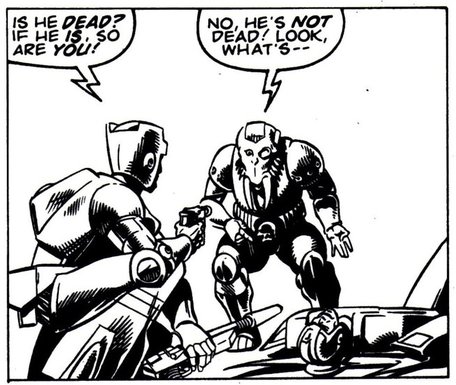 "I've waited a long time for this!"
This is a significant issue for Delbo as it’s his last before Americans get a glimpse of what the UK guys can do. His moving away from the book effectively starts here. It’s reasonable if not unspectacular, with the brooding Prime art working better than the somewhat confusing (I’m not sure what Jazz is doing that he thinks the guard he shoots wasn’t expecting, floating in mid air by the look of it. It can’t be leaving his Pretender shell as that’s the sort of thing you’d expect a Pretender to do) battle at the refinery.

It’s aslo odd that when Prime remembers the Autobots killed by Starscream, the still very much alive if not quite all together Fortress Maximus is in the flashback.

Edge of Impact continues Kup’s murder investigation. Who could be behind all the killings and sabotage? Is it Longtooth?

The cover is misdirection in more ways than one, as Longtooth is only a suspect for about a page. Yes, Kup finds him standing over Prime’s body and gets very angry, but Arcee immediately walks in and goes “No really, we both found Prime like this”. She really should have called up Kup right after finding Prime rather than letting him stumble in like that, things could have gotten nasty.

Unless she secretly wants Longtooth dead?

There’s a slight sense of padding to the accusation of Longtooth, a feeling added to by the issue opening with Kup recapping his suspicions into his log, before recapping them again when explaining why he wanted to kill Longtooth to Arcee. 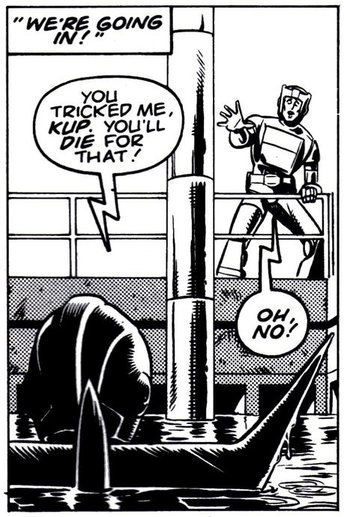 Who can it be?
It turns out the saboteur has sealed the retro-room and the only way into it so they can fire the engines is for Arcee to swim in via the coolant tanks. And as I’ve been critical of Furman’s writing of Arcee before, I should say she’s at her most capable and functional as a character in this story.

This is a trap however, Arcee’s really going in via a Jeffries tube style crawlway, and Kup is waiting at the tank, desperately hoping he’s wrong as the deadly assassin emerges, angry at having been tricked. Boy that spoiler on their back looks familiar…

The retros fire, albeit only in time to make the crash softer than to stop it entirely. But there’s no time for people to recover as Kup introduces their enemy…

Oh who can it be?

If Transformation hadn’t blown it, this would have been quite an exciting and dramatic issue ending. Especially if you remember Aspects of Evil! and realise exactly who it is possessing the Autobot leader. The tense moody feeling to this story continues, and though there’s a bit of padding here it’s overall a good instalment that continues to develop Kup well.

Staz does more good work on art, with the final splash page being especially memorable. His scale for the Autobot shuttle as it crashes seems off though, considering we’re told it has over 400 Autobots aboard (Rodimus in fleeing has more troops than Optimus has ever had on the Ark!) and enough energon to devastate the planet if a full impact had happened, it really should have looked larger compared to the trees in front. 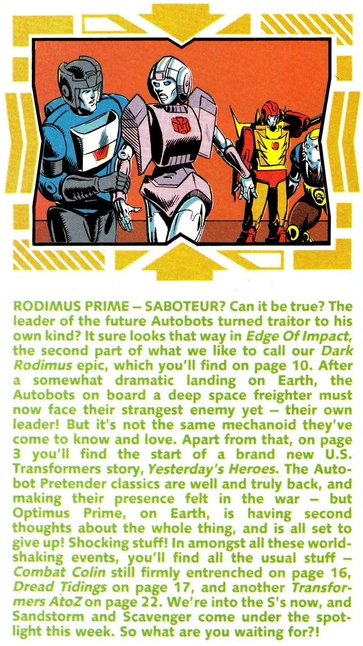 Not Longtooth thern?
In between ruining the conclusion to the story, Transformation also talks about what is coming in 1990. As readers have been asking what has been happening to the old characters an Aspects of Evil! style story looking at Prowl, Ironhide, Sunstreaker, Wheeljack and Silverbolt is coming soon. Plus a sixth linking issue. I don’t know why they just don’t flat out say “It’s Galvatron!” now.


The sidebar also mentions the forthcoming big changes to the look of the book again, which I still don’t remember and am now really curious about.


As a sign of how readers really are more interested in the old characters, Dreadwind gets two different letters asking if the Shockwave and Predacons toys are still available to buy. Though as an example of Dreadwind Fails to Answer Questions Properly! he just says Shockwave was is no longer on shelves rather than never having been released here (he’s even vaguer on the Predacons).


As a rarer example of Dreadwind Answers Questions Amusingly!, he tells Dominic Driver of Clitheroe that the place to buy a gun like Thunderwing’s is the weapon shops of Isher.


Chris Allen (location not provided, wisely) has also sent Hi-Test an AtoZ profile of Dreadwind, his function being “Giving daft answers to letters” and his motto “I’ve never won a battle and I never will”. His weaknesses are “Too many to write down, even if you sellotaped all the pieces of paper in the world together”. Hi-Test decides to burn the letter in case “You know who” sees it.


Speaking of AtoZ, it covers Sandstorm and Scavenger—both of whom have more manageable weaknesses—this week.


Combat Colin comes up against The Pocket Picker, a man with freakishly long arms who uses them to...well pick pockets. Unfortunately when he picks Colin’s pocket he grabs a Mighty Boom Boom Bomb instead, allowing him to be grabbed by The Long Arm of the Law (Boom-Boom!).


G.I. Joe: The Action Force find themselves surrounded and gassed and forced to come up through the basement of the World Trade Centre (remember than?), all whilst the old veteran is still moaning about his treatment by the government. Which I think shows a skewered sense of priorities when a group of terrorists are chasing them into the Twin Towers.


Probably not a story they’d do now.


Next week, Hot Rod is a dick in both stories. 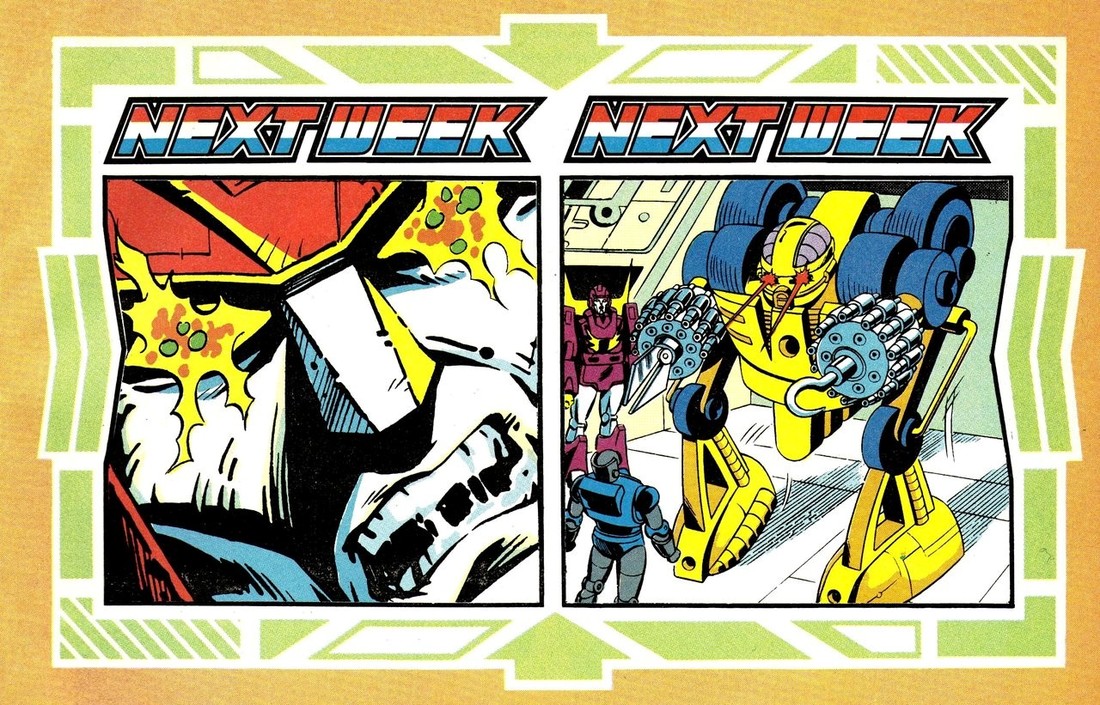