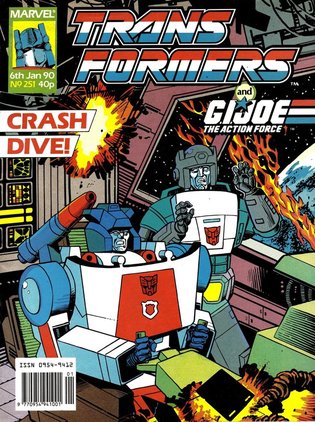 
In a word, malicious and pre-planned sabotage!


Welcome to a whole new decade! 1990 is going to continue to be a series of lasts for the book, including of course the last British story of them all. The slow wind down of the series hits one of those major Lasts in the first issue of the year, as the final ever future story starts.

Pleasingly the cover, by newcomer Gary Erskine, not only looks incredibly ‘90’s (it wouldn’t be out of place in Generation 2), with its explosions and danger surrounding Kup on an Autobot ship it could apply equally well to either of this week’s stories. If you assume Red Alert was also on the 1990 Ark, lurking in the shadows, waiting for something to fall to him.

Hot Rod's famous Bum Laser is better than anything the Decepticons have.
Said 1990 story (you might argue it’s still 1989 for the characters, but I’m not entirely convinced it’s not just turned 1993 in-story considering how it has dragged) opens by dealing with Starscream in an incredibly undramatic way. Despite easily swatting aside the likes of Mindwipe and Weirdwolf (and it’s regular Starscream out of his shell that does this), Hot Rod deals with the whole situation by simply shooting Starscream’s shell in the bum.

Now yes, it’s established that Ratchet’s little surprise was going to kick in naturally, so the timing could well be a coincidence. And the fact that pain inflicted on a shell is felt more keenly by the owner will recur, even if it is an insanely poorly thought through design flaw. But none of the Decepticons’ shots managing to produce a shrill scream from Starscream is stupidly unlikely. Is his bum his weak spot?

This then inspires Prime to come up with an amazing plan: Have everyone shot Starscream at once, which Starscream survives seemingly unscathed despite still not being in his super shell. I’m starting to wonder why he needs it, with its bum based design flaw bringing him down. Luckily Starscream’s real persona resurfaces, and as someone who once had the sheer balls to connive and trick his way into being a God and despite still having the super shell and despite seemingly being naturally impervious to all weaponry he immediately starts begging for his life and saying it was all Megatron’s fault.

The one redeeming moment of this entire sequence is Prime encouraging Zarak to overcome his fear of Starscream, which continues to build the relationship between them. Which is important as they won’t be meeting face to face again until (SPOILERS) Prime surrenders, this is the last chance Furman will have to get the two of them into a place that story and its follow-ups need them to be in.

The more interesting stuff however, is back on Cybertron. Megatron finds Ratchet at the dimensional transporter and assumes he is trying to escape...only to find Ratchet has actually had Blackjack’s bombs sent over from the Ark. This entire scene is just brilliantly handled, from Ratchet gleefully throwing his sabotage into Megatron’s face, through the Con’s horror as he realises Ratchet really is going to kill them both to the triumphant “This time you stay dead!” as the medic rugby tackles Megatron to stop him just stepping through the portal. 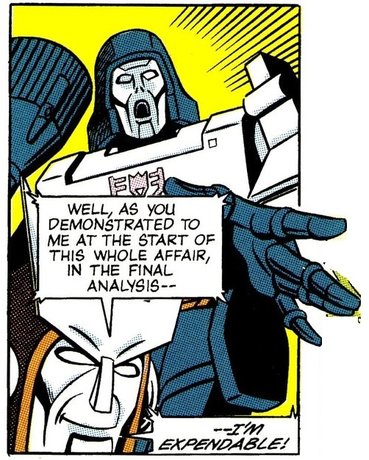 Primus bless you Ratchet.
It is by far the best scene of the story, and if (as Furman had been half expecting) the series had ended here, it would have been an amazing exit for both characters as the base explodes to the shock and horror of the battling Autobots outside. Though yes, Furman is enough of a craftsman to give himself an out (and may even have planned far enough ahead for what is to come. Mind, there’s no indication of two explosions as will become important later) by having them hurling at the portal before cutting to the BRADDAKOOM.

Though what is it with Megatron and long range teleports? The Prey! Arc (where he is also being rugby tackled onto the Space Bridge so as to kill him! This is basically a straightforward reuse of the idea, but given more dramatic weight by not being an after the fact flashback), Gone But Not Forgotten! and now this. Surely he can’t survive seemingly exploding on one for a third time?

As things end with a worried Prime wondering what has happened to Ratchet (after letting Zarak leave with Starscream on the “He’ll screw them up better than we can” principal), we have a strong ending to a storyline that—despite many great moments—has never kicked properly into gear. Things did improve as they went along, but the Earth plot was overblown and anticlimactic. It’s certainly stronger than Budiansky’s final few issues, but I’m not sure how many readers would have noticed that much of a difference in the new guy’s approach.

Luckily the settling in period is over now, and the upward swing will continue into some incredibly strong material. And how lucky are we that these issues were short enough to require them being split into three rather than four? Can you imagine another month of this?

On art, Delbo continues to veer all over the place, though where it matters in the final Ratchet/Megatron moments he completely nails it. Though you’re more likely to remember his ridiculously sad eyed (complete with pupils!) Prime in the final panel. 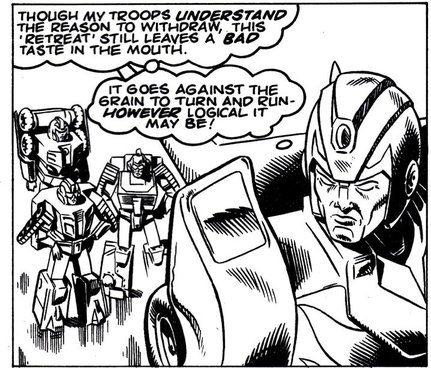 Imagine being judged by Micromasters.
The Void! is of course a title Furman will reuse on the American book, and our second story is full of similar small moments that will be reworked into that series. An Autobot ship struggling with re-entry above Earth as the engine room has been torn apart by an enraged person aboard will in particular come up when we find out what happened to Ratchet and Megatron.

The story itself continues—and ends—the tradition of starting the new year with a future story set on new year’s day. Though a typo means it claims to be 2009 rather than a year on from Time Wars (which would actually be a sensible thing for the Hachette colour version to fix). It’s a direct sequel to the Galvatron Aspects of Evil! story in what will turn out to be more ways than one as Rodimus has grabbed a ship and as many troops as he can and run away from dark Cybertron to regroup on Earth.

The opening description of hyperspace travel as a mysterious and unknown dimension is nice and evocative, creating a mood that continues into the plot proper as Rodimus is now worried the Autobots are resentful of his decision to flee. It’s largely stock Marvel Rodimus, but it’s well done.

One oddity of this story is that it really fully embraces bringing current toy advertising into the future stories (something they mostly avoided in the colour era), with Micromasters and the most recent batch of Pretenders aboard. Which is presumably why we don’t get one of the joys of the 21st century adventures: Seeing proper named characters get killed because their younger selves can still appear. This isn’t allowed if you’re on shelves, so a Mysterious Saboteur aboard only kills a generic as he wrecks the engine room. 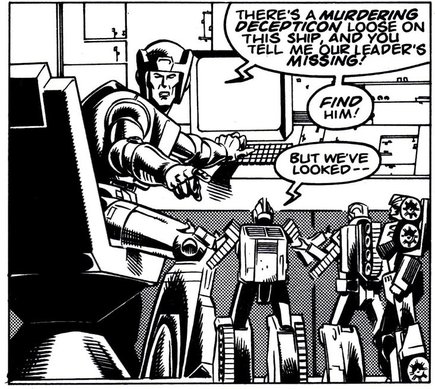 See, Kup has no time for Micromaster crap.
This means the issue (for reasons that will become apparent) actually becomes a Kup story rather than a Rodimus one, and we get to see him doing his official job of security for a change. With Kup so often either a comedy character with his endless reminisces or just muscle, it’s great to see him taking charge and conveying the right sense of authority as he arranges searches for the presumed hidden Decepticon, berates the Battle Patrol for losing Rodimus and comes up with a way of scanning for life signs to find the intruder. There’s a proper sense of authority and command here that’s most welcome to see and which will again become important in the later American stories.

Things go from bad to worse as the Unknown Assassin (though he has very familiar knees) kills two more generics, it falls to Red Alert to tell everyone they’re in danger of crashing into the planet and Kup reveals his scan shows no extra robots...the killer is one of them.

This is a very strong, moody opening that shows there’s still life in the future cast despite their main plot having wrapped up. It also continues to show strong art from Staz, who not only draws a great Kup but also puts the effort into making the generics looks like Pretender inner-robots.

Transformation is excited for the new year, and paraphrases the American cover to Skin Deep by claiming “No, it isn’t a hype, this issue an Autobot dies!”. It also makes the equally inaccurate statement that the British story starts a trilogy, when it will run for four issues.

The sidebar talks up new comics for 1990, anthology Strip (“The ultimate in chic”) and Captain Britain based Avalon. The later will undergo a name change before we see it, but this does show Marvel UK are trying to move beyond licensed titles. 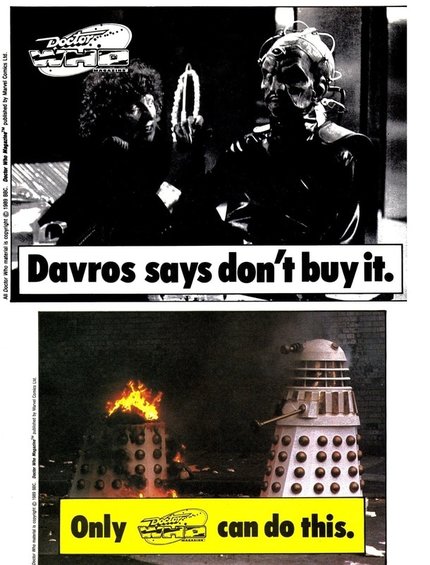 The two DWM adverts.
G.I. Joe: The Action Force returns, but after a week’s break I’ve lost track of the plot. There’s more running about sewers and Cobra are putting their nerve gas in a milk tanker. There’s some attempt at drama as the old vet runs away in anger at the modern army, but for British readers it’s probably more notable for the first time we’ve seen Road Pig and his one joke (split personality, veering from posh to thuggish and arguing with himself) in Transformers.

Combat Colin is called to stop Bankrobber-Man from robbing a bank (“What else could he do with a name like that?”), and with two many innocent civilians present for the big guns (“Aw! They don’t look that innocent!”), Colin uses The Rude Gun. Which makes it look as if Bankrobber-Man is farting like there’s no tomorrow, embarrassing him to the point he doesn’t see the punch coming. AtoZ covers Runabaout and Runamuck, appropriately as they’re very much characters who’d appreciate fart based humour.

The big surprise this week though is—after several issues where his answers seemed to be improving—how much Dreadwind Fails to Answer Questions Properly!, not so much in terms of inaccuracy but by giving unhelpful vague one word answers. This may be because a third of the page is given over to a letter from “Black Jack”—not that one—a robot assassin friend/enemy of Dreadwind. Which is mildly amusing but doesn’t leave much space to deal with questions. So folk wanting to know how Prime combined with his trailer after it was destroyed in Prime Bomb!, or when Transformers will be back on TV are plain out of luck.

One other thing to note is that there’s not one, but two half-page adverts for Doctor Who Magazine, with season 26 having just finished and the show’s fate uncertain at this point, someone was clearly keen to keep the brand alive. 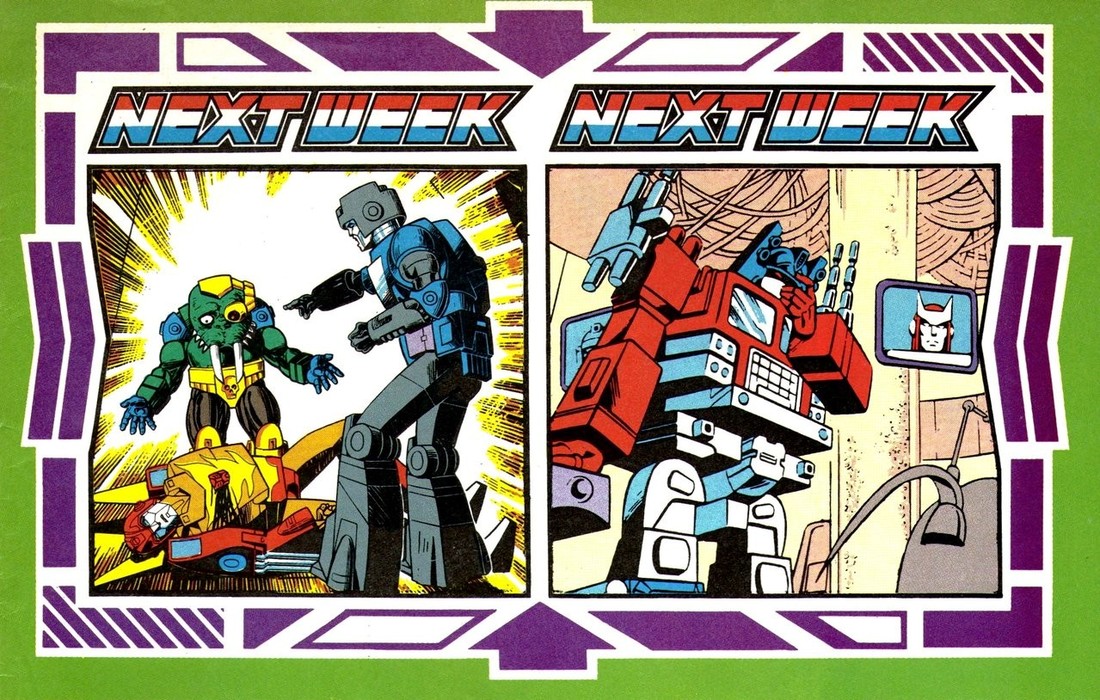