At First I Was Afraid, I Was Petrified. 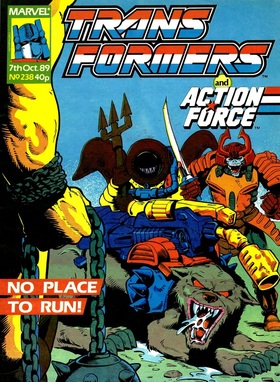 
Yes, the title of the American story is still wrong. Moving quickly on...

There’s a pretty big first meeting between artist and character on the cover this week as Andrew Wildman (who according Transformation has been on holiday) gets to draw Bludgeon for the first time. It’s fair to say his angular sharp take on the Metalliko master will arguably come the be the definitive version, though here he stays closer to the stockier character model Jose Delbo will stick rigidly to. It’s a marvellous cover though, that really sells the desperate situation Carnivac is in.

But before the fight to the death...more wrestling! 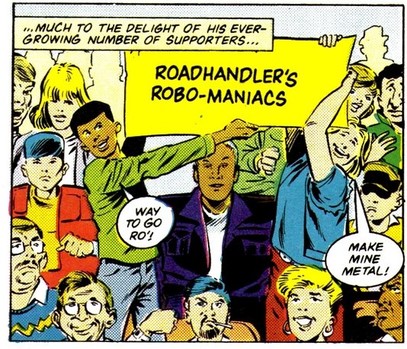 Roadhandler's fans. Both of them.
The most notable thing about seeing Roadhandler’s rise to fame through wrestling (though fans of the genre, considering the matches are fixed is it unusual he would win every bout over a period of weeks?) feels like it’s trying to make a commentary on the nature of fandom. Or in other words, that Dwight and Even are surrogates for the audience at home. Transformers fans in the world of Transformers itself. Something that leaves plenty of room for satire or outright biting of the hand that feeds depending on how its handled.

But everything is just so half-arsed. Roadhandler’s fan club only ever consists of two people, and other than being good at banner making (“Roadhandler’s Robo-Maniacs”. Should have been “The Road Whoreiors” or the “The New Roadmantics”. Or my personal favourite, "The Love Handles") we learn nothing about them as characters beyond the fact they really like Roadhandler. There’s no humour to be had from their hero-worship, no amusing quirks in their obsession and frankly when they are under threat of kidnap at the end it takes a few seconds to remember who they are.

In that respect it’s a shame Roadhandler is such a virtuous hero, after every match he gives a sincere speech about self-improvement and in his spare time he teaches his fans (both of them) self defence. If you were going to go down the road of a Transformer having a fan club why not go all out and present him as a wrestling diva with catchphrases and banter?

Amidst the worthy but dull preaching it takes Scorponok to add some life to proceedings with a bonkers scheme. Indeed, his last bonkers scheme as Furman will very quickly rework him into being a generally more noble and certainly more sane character.

So, with a group of Auto bots whose every move is well documented by the ever-present Cecilia, Lord Zarak (who the Micromasters don’t seem to have heard of. They really need to attend staff meetings) naturally just bombs the wrestling ring to kill them all and damage human/Autobot relations. 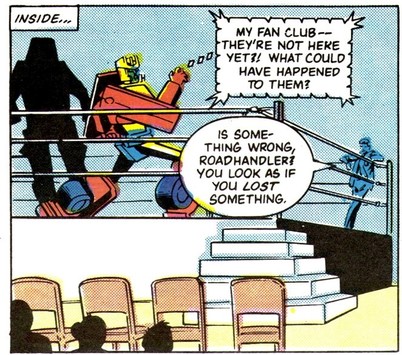 Why did they reserve four seats?
No, wait, he instead cheerfully walks into Roadhandler’s gym without his armour on as if there’s no danger of any action kicking off by confronting the unpredictable hot-heads. And presents himself as a talent manager with his own group of wrestlers...The Micromaster Air Strike Patrol! Who have all come along even though he’s only offering Whisper up for a fight and the more unreliable troops are about the more chance there is he’ll be caught in a crossfire.

Just a quick pause there in the middle of this madness to note that when Whisper has his “Only because it serves my purpose” moment. This was a deliberate bit of foreshadowing of them being...well shadowy characters inserted by Uncle Bob at the request of his successor as as set up for Furman’s first story.

So, Whisper will fight Roadhandler, but as a twist Zarak has sneakily arranged for the other members of the Air Strike Patrol to kidnap Roadhandler’s fan club (both of them). Cecilia has enough sense to have seen this coming and to get the other Autobots to come to their rescue, but as no one thought to mention this to Roadhandler beforehand he must throw the fight after he notices the massive gap in the audience left by the absence of his fan club (both of them) and Zarak taunts him.

Though considering Roadhandler only won his first fight against Jackhammer because it was rigged, it’s hard not to see this as long overdue payback.

This part manages to be quite dull and with any humour in the proceedings being entirely unintentional. Jim Fern takes over fully on art despite what the still wrong credits say and produces only mediocre work, his exercising Roadhandler looks especially appalling. 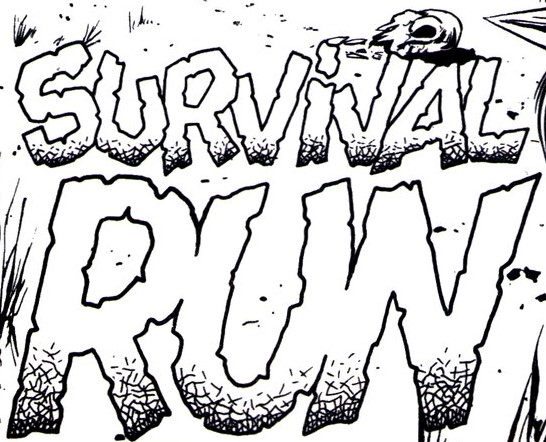 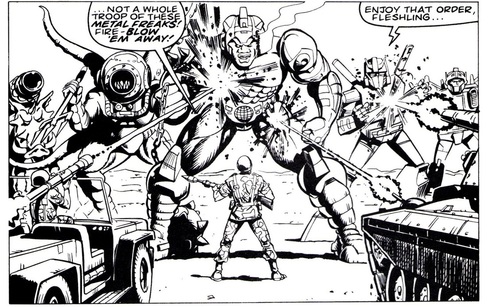 Notice it's the portrayed as the saner member of the team Spinister who gets the pre-kill one liner.
Mediocre is far from the word to describe the black and white story however. The first thing to note is that Lee Sullivan is on fine form, from the dehydrated Carnivac dragging himself through the desert (a deliberate mirror of Ravage doing the same back in The Enemy Within!?) through the nice chunky fight scenes, every one of the panels shows an artist having a grand time. He even knows what Skids’ face looks like, something not every artist on this era can claim.

The storytelling is equal to the art, and continues the dark feeling of the recent run of UK adventures. It’s not just the heat (there’s a token line about it overheating circuits, but it’s drawn like a dog left in a car too long) that’s affecting Carnivac as he drags himself across the Texan desert, but guilt. His life was saved from the cliffhanger as the US army—in an unusually prompt response to the Hell Hound—arrives and makes the mistake of taking on the Mayhems. Carnivac fled as all the humans are rapidly and easily killed.

That has an edge to it, and fuels Carnivac’s self loathing and doubt, not aided by him wandering past a human town as his pursuers catch up, placing more humans in danger.

We then cut to the weakest part of the issue even if it does make for a (almost certainly intentional this time) mirror to the two turncoats initial reluctance to come to Springer’s aid back in Survivors. Mr Texan Hat from last week was told by Carnivac to call Team Springer in, which is in and of itself an odd idea as it suggests they’ve set up a phone line at some point.

"And I will stick to my refusal to help"
What follows is basically perfunctory, Springer won’t held Carnivac as he left them, Catilla tells him to jog on and rushes to help his friend whilst Springer looks sheepishly at the others as he insists it was the right call. I wonder what will happen next week?

This—still necessary to the plot—aside done with we’re back to the heart of the story as Carnivac is faced with a choice: Octopunch has captured some humans in the quickly wrecked town and tells his former ally to leave his shell or they’ll be killed. His choice to comply could easily be presented as cathartic for Carnivac, a chance for redemption after abandoning the soldiers. But there’s more a sense of resignation to proceedings, and of course the pure bad luck of having walked past this settlement means that any humans who have been crushed in the collapsed buildings are on his conscience as well.

Octopunch isn’t the sort of guy to be impressed by gestures however, and in what is probably his big individual moment in Marvel tears Carnivac a new arsehole with words mocking his heroic act before preparing to tear him a literal new arsehole with his trident. Will anyone come to save him?

There’s some very strong material here that shows the advantage of this story having slowing built up over the course of 1989. Indeed, it’s probably the last time the British series would have the chance to create a real long term investment in new characters. All of which only adds to the tension for next week’s conclusion. 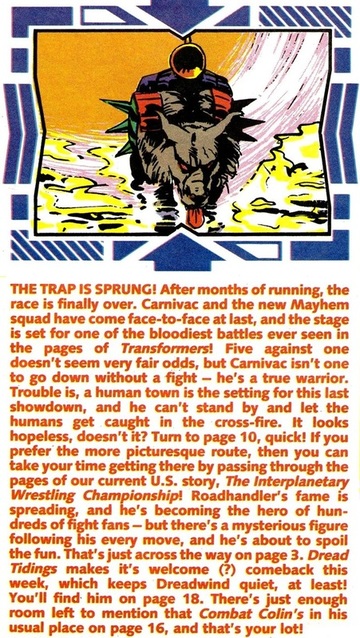 DIE WRESTLING DIE
Transformation continues the trend of complete disdain for the American story, going for over half its length encouraging the reader to go straight to the second story before grudgingly suggesting that “If you prefer the more picturesque route, then you can take your time getting there by passing through the pages of our current U.S. story, The Interplanetary Wrestling Championship! Not only does this add to the confusion over the title, imagine anyone ever promoting any other Transformers story as “Picturesque”. Not to mention the very clear emphasis that this isn’t one of “Our” stories.
The sidebar not only talks about the return of Andy Wildman on the cover, but also apologises for pages in the final issue of Death’s Head being in the wrong order, though Marvel will send you a replacement copy if you post yours to them (offer may have expired by now).
Amusingly—considering the story reaches the moment the book has been trying to big up for a few weeks—there’s no mention of Action Force. In which Cobra Commander decides to give it all up to rebuild his relationship with Billy. When Fred and Raptor object that Cobra will collapse without him there’s a fantastic joke of him offering to write references on their behalf for Serpentor.
This righteously pisses off Fred, who grabs a gun and completely unambiguously kills Cobra Commander, with the shot clearly going through his heart. Luckily the comic won’t last long enough to have to deal with the eventual Very Silly retcon of this scene and it’s a moment shocking in its casual brutality. This is really the run of Action Force I remember best from the time, and Fred casually saying it could be anyone in Cobra Commander’s costume will lead us to some interesting places.

And also some really badly thought out and stupid ones. Though again, the backup may end before we get into the really idiotic stuff.
Combat Colin begins an adventure in mid-action as Colin and Steve use the Combat Plane and a Nuclear Pop gun to take out the Skydriver, a Don Henderson lookalike with a flying bus. The comic treats him as if we should already be familiar with his gimmicks but I don’t recall seeing him before, I’m not sure if that’s just part of the dropping you right in it approach or if he’s from the Action Force days. The key thing though is that the nuke creates The Gunge, the loving homage to ‘50’s B movies that will be fuelling the rest of this story.
Dreadwind returns, and with brings back Dreadwind Fails to Answer Questions Properly. Noel Moore from Co. Roscommon asks about the recent adverts for a Pretender Bumblebee, to which Dreadwind replies that he should remember Goldbug was a casualty of Time Wars. Which is technically true in the “Got a bit hurt in the arm” sense, but does continue the UK team’s heroic and insane efforts to pretend that Dark Star precedes that story rather than the other way round.
Next week, we lose one writer and one character from the book. But which will make it out alive? 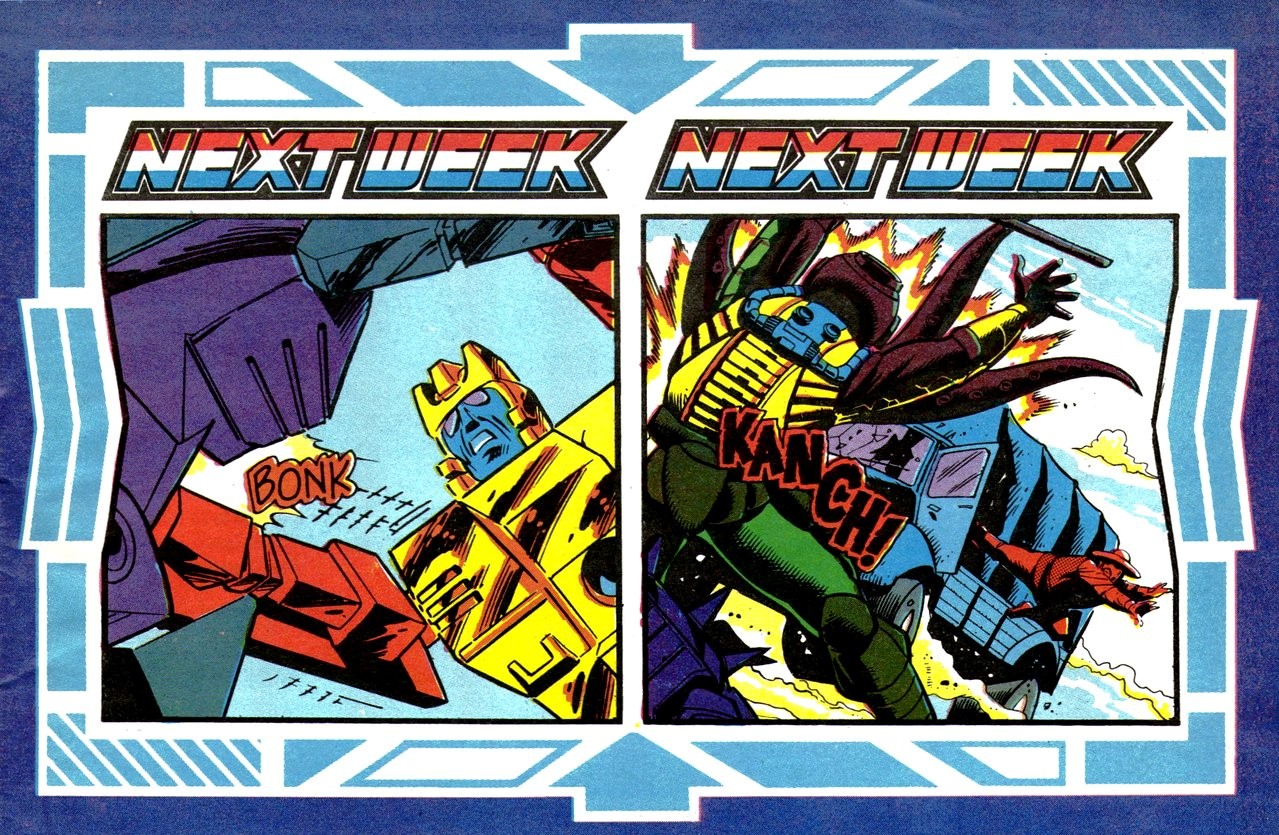