Rising Up to the Challenge of Our Rival. 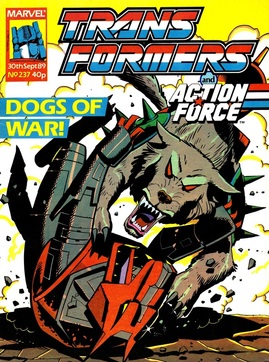 
*The title is complete changed for the rest of the story, normally I just ignore the little differences in the UK created title boxes but this is such a major one I’m rolling with it.


Well, I suppose it is a bit unsportsmanlike.


First some good news, the partwork has formally been confirmed for starting in the new year and the relaunched early issues are up for pre-order on various websites such as Forbidden Planet. Despite some disappointing placements (Cold Comfort and Joy after Time Wars?) and the odd choice of Nel Yomtov aping colouring on the black and white stories the four initial books were all pretty cool. I think for people wanting to just dip in and out the Edge of Extinction volume is a nice chunky collection of some great Furman.

There’s also a questionnaire link on the bottom of the WEBSITE page for feedback for those who did manage to get the trial issues, I’ve used it to voice my niggles and it’s a chance to get anything changed before the proper launch if enough people raise the same points. 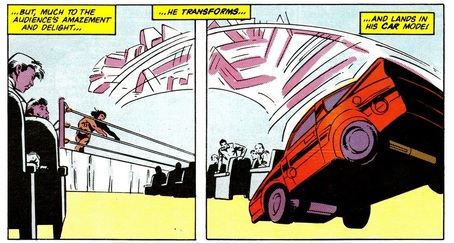 If only he had some Giant Haystacks to land in.
As noted above, the UK team are so little invested in the colour strip they can’t be arsed to make the title even vaguely match the one they used last week. Or to change the long list of page specific credits to acknowledge who actually worked on this issue. But what does Wrestle-Mania Part 1...err...2 offer to the less discerning reader? Why wrestling of course!

In one of the first times hacking an American story into four has produced something that works as a self-contained piece, this issue is given over to the staged fight between Jake “The Jackhammer” Jackson and Roadhandler. As noted, I was never hugely into wrestling beyond liking some of the classic Hulk Hogan films so I’m not sure if this works better for whom this would be two of their favourite hobbies collide.

What Bob does better this week is the theatricality of the sport. Jake bringing out a pneumatic drill (or I suppose, a jackhammer) whilst the referee weekly goes “That is not permitted” feels exactly right, as is the big show-off moment of Roadhandler using being thrown to transform into a car and wow the audience. It’s not particularly my bag, but it does feel roughly in the right ballpark for those whom it is. I especially like the Autobot’s Machine Man style stretchy arms when he holds Jake down for the count. Amusingly he is then declared “Intergalactic wrestling champion”, a now redundant title drop thanks to the UK title change. 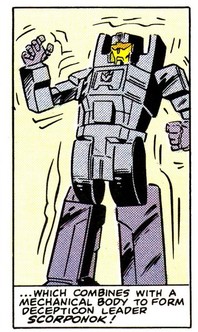 Scorpy's Shockwave cosplay was a tad flawed.
The actual plot advancement only comes in the opening and closing moments of the issue though. In the audience two kids, Dwight and Evan, initially start out wary of Roadhandler—and for once human disbelief in the aliens makes sense as it is just as likely the promoters would use a man in a suit—but are brought round by his victory and hilariously pro-faced “I will continue to seek and earn your respect” acceptance speech.

Also in the audience is a Man in a Suit! Who turns out to be Lord Zarak. Whose face is comically kept in shadow before the reveal regardless of the lighting like he’s his Headmasters cartoon counterpart. It’s not clear here if he was just following up on Roadhandler’s TV appearance or if he just likes wrestling, but after he’s rode home in Sub-Marauder (and combined with a very purple Scorponok) he has a plan to call some real competition for the Autobot in over the Space Bridge...

This flows better than the opening part, but despite some fun with the wrestling it’s still fairly inconsequential and is very hard to engage with. Bob’s art on the story ends here (despite what the UK credits claim), with the first page solely by Jim Fern solo standing out for Scorponok with hands. For once Nel Yomtov getting confused is understandable. 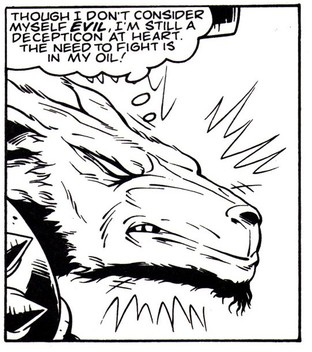 Hey Drift, Carnivac called. He wants his gimmick back.
The black and white story is also concerned with a big fight, but Way of the Warrior has a lot more bite to it. Picking up on the threads left by Survivors, it introduces several ideas and themes that will become a standard in Furman’s work and the franchise in general.

Since we last saw them, Springer has been attempting to forge the Survivors into a low rent superhero team, dealing with crashed trains, hijacks and burning oil rigs. It’s easy to imagine the trained to kill former Wreckers would have trouble adjusting to this life, and Catilla claims to be struggling as well, but the focus here is very much on Carnivac.

Up to now, the lines between hero and villain—even an Autobot villain like Flame—have been fairly straightforward. Some like Flywheels or Soundwave may be more likeable than others, but overall the Decepticons are pretty happy in their lot, as are even the rougher Autobots like the Wreckers.

Carnivac on the other hand is tormented, torn between his basic nobility and his own violent nature. The enemy turned reluctant friend may be a bit of a fictional cliché, but this is a first for Transformers and provides a rich new seam to be mined. It’s something Furman will return to again and again—mostly with Grimlock—and other characters such as Dinobot in Beast Wars and Drift in IDW (amusingly his creator Shane McCarthy would claim there had never been a character like that in Transformers before) would travel a similar path. It almost always works in creating an interesting character, and as the comic continues to age with its readers it adds more layers and nuances to the world.

Of course it’s still an action comic, so things open with Carnivac decking Springer before going off in anger at their dull life, with a very well written internal monologue on this conflict within himself. 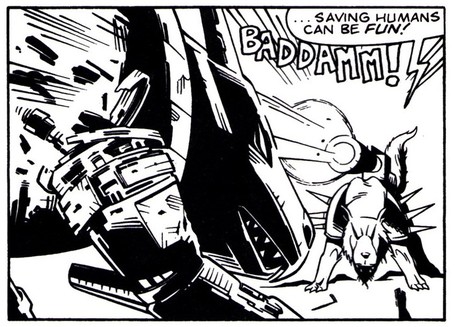 And what fun.
There’s little chance for introspection though as a car driven by a man in a hat that suggests this is set in Texas crashes into his leg. Though he is initially scared, he quickly recognises the Pretender as one of the “Good” robots from the TV news (RAAT and Circuit Breaker really aren’t trying are they?) and asks for help against a monster dog robot has been attacking his town. Carnivac is initially keen to just bugger off as he doesn’t care about heroics, but in the grand Furman tradition he decides it’s better to die on his feet than keep running, and lays into and quickly overcomes the beast. Which leads to the revelation he really isn’t just a soulless killing machine like the dog, but at the same time saving humans can be fun!

This epiphany is short lived however as the owners of the Hell Hound (who feels rather like a precursor to the Spark Eater from More Than Meets the Eye) were only using it as bait to draw out the newest wandering superhero team and are delighted to have hooked the main target. The new Mayhems are there for the kill, and Bludgeon is glad Carnivac wants to fight as he hates it when they give in...

This rather shows up the opening story as it shows it’s entirely possible to have an issue based around one fight without it really being only about that one fight. Great characterisation coupled with some fine Simon Colby art (I love his furry Carnivac) all add up to a story that works well on several layers.

Tizvg hgeuu.
Transformation still doesn’t seem terribly enamoured of the American story, instead making jokes about the film An American Tale for no readily apparent reason and assuring readers a villain does show up eventually. The sidebar previews several upcoming stories, including the return of Thunderwing and a certain tale about Megatron’s mental health issues that will be continuity stretching to say the least.

Dreadwind also uses the space to moan about the letter’s page being missing from so many recent issues, including this one as it makes way for the latest Classic Covers Calendar (well before the start of the month this time!) with Lee Sullivan’s “Exciting news inside!” Action Force merger piece form issue 153. Imagine being a reader like me who wasn’t there the first time around and thus assumed there had been a crossover at some point. Which I suppose was technically right.


Combat Colin continues the recurring theme of sending up Comic Activity pages by introducing the Combat Code. This simple letter substitution cypher can be used by readers to decode various speech bubbles within this week’s story, mainly related to how stinky Colin’s feet are in his Ilxpvg Yllgh (Rocket Boots). Wonderfully Lew Stringer’s signature on the art is also in the code (Ovd Hgirmtvi).


In Action Force we get to see our boys undercover in Madeupcommieland, and as Stalker is dressed like an African chief but Snow Job is just wearing a suit, we can assume the readers who suggested he was just going undercover as a man who worked on an Arab oil rig rather than an Arab who worked on an oil rig were correct, as even though last issue made it seem Duke was talking about their various new nationalities it’s clear they wouldn’t miss a chance to dress him up like Roger Moore in that harem sequence in The Spy Who Loved Me. Amusingly all the effort at going undercover is rather wasted by their contact loudly shouting out Stalker’s name as they meet.


Next week: A fight that can only be described as tooth and claw. 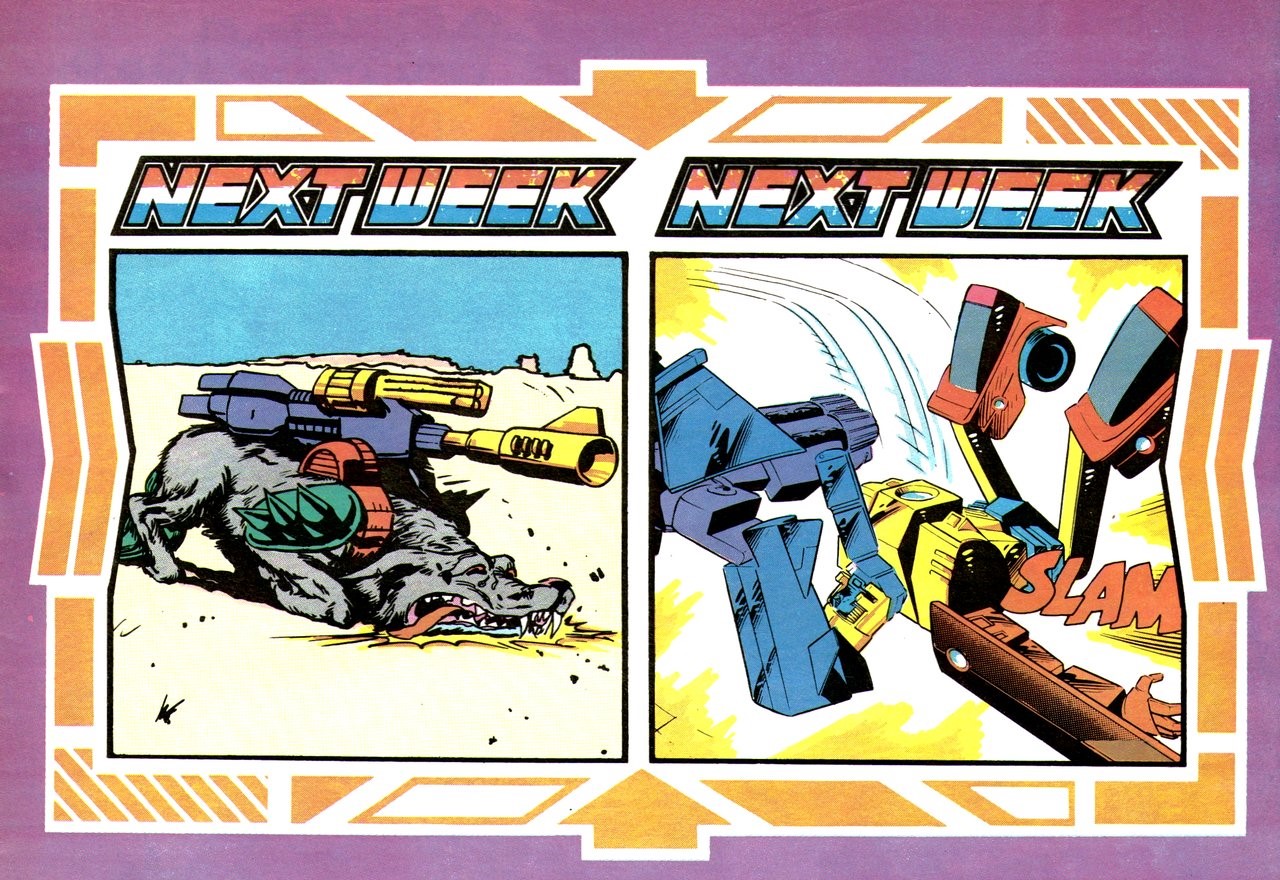