We Don't Need Another Hero. 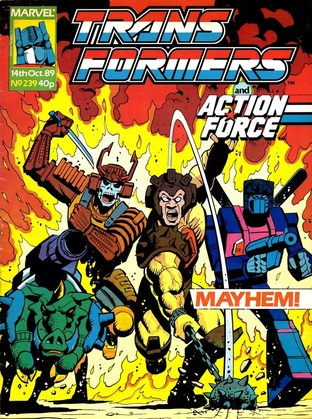 
A fine speech my once friend. I’ll see they have it inscribed on your tomb!


As a child I didn’t pay any attention to the name of the writer on the comic. I did intrinsically know I liked the story’s with “Spotty” colouring less than the ones with “Normal” or no colours, but I didn’t really know my Simon Furman from my Bob Budiansky at this stage.

This would change over the course of the next year, I think Transformers was the first fiction on which I grew to be really aware it was actually made by people rather than, I don’t know, being magically farted out of a unicorn’s bottom. As well as coming to appreciate Furman as one of my favourite writer’s, between that 8 and 9 age is when I really started to tell the difference between the Andrew Wildmans and Geoff Seniors of this world.

All of which was too late for me to really appreciate the importance of what happens this week. I wouldn’t have noticed the usual name on the “Spotty” stories wasn’t there any more, especially as there was no fanfare in the issue itself, even to promote the local boy made good taking over. Having not enjoyed most of his work in the year or so since I started getting the book at best I would have been relieved he was going if someone had explained it to me. 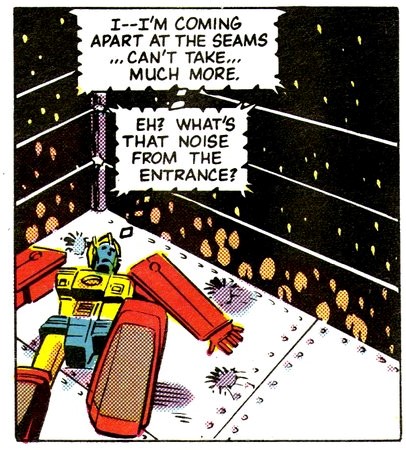 The author running out of the door?
The shame of the conclusion to Wrestle-Mania (sigh), is not even that it’s bad. If it were there would be something to discuss, and unlike my child self it feels like there should be lots to talk about as the man who is the closest thing to a creator Transformers has takes his final, long overdue bow. But up till the last page it’s incredibly pedestrian and very much as going through the motions.

So Roadhandler is losing his fight! But then the other Autobot Micromasters arrive with his fan club (both of them)! Roadhandler wins his fight! Whisper and Lord Zarak run away! Nothing of any surprise or interest happens and everything is far too easy, most obviously in that Roadhandler goes from being at death’s door to whipping Whisper in six panels. The reduction of Zarak to a pantomime villain is especially annoying, and frankly it would have made for a better transition to Furman if he’d written something approaching the same character we’ll be seeing over the next few months rather than just throwing in random foreshadowing amongst Micromasters. Appalling art from Jim Fern (with the credits still wrong) doesn’t help.

Luckily though, we have the final page to throw some meat on the bone. Roadhandler realises his actions have endangered his fan club (both of them), and so goes out of his way in his victory speech to denounce everyone and everything. And because no good wrestler ever becomes a villain to great success this so shocks everyone it turns the entire crowd and his fan club (both of them) against him.

Luckily the fan club (both of them) overhear him explaining his decision to distance his fans (both of them) from himself to Cecilia as they leave the building. His response when they ask if he really meant his words? “That’s not important. But this is—You don’t need me. You never did. Don’t go looking for heroes to believe in, believe in yourselves”.

It’s pretty much impossible not to read that as the very tired writer talking, desperately pleading with the editor to be let go and finally getting to walk off into the sunset whilst dismissing any remaining readers the book might have. Even more than the mediocrity of the story, this shows an author who was more than burn out. 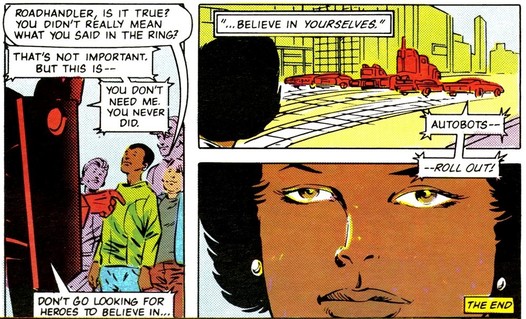 Subtext becomes text.
But of course, Budiansky was wrong, we did need him. His profiles and set up for the Universe are the foundation of the entire franchise, every single creator on the comics, cartoons bath salts and all the way up to the forthcoming fifth blockbuster film are all standing on his shoulders. And even though he certainly had his rough patches and went out with a whimper, he maintained a higher standard of quality to almost the end than the coming up to eight year old me would have given him credit for.

And as far as Transformers would be concerned that would be basically it for Uncle Bob. IDW would ultimately twist his arm into adapting the 1986 film again, but his heart clearly wasn’t in it (having basically been offered the chance to do anything, it’s clear he picked the easiest thing possible just to stop them asking him) and if anything that book is worse than the original comic version. Otherwise though he seems to have been happy to leave that all behind, which has probably helped with the perception that he’s The Other Marvel writer as his online and convention presence has been much less than that of Furman. Though one of his infrequent convention appearances or podcast interviews are always worth catching as he remembers far more about the behind the scenes details than he thinks and his slide show of the big box of original notes his has in his garage is fascinating (and some fan in America should try and sort out going through that properly and scanning everything for prosperity on his behalf).

After this he’d spend more time editing at Marvel—including Spider-Man—and his other major writing credit would be on the self-created Sleepwalker, a concept he thought of in the ‘70’s and would finally see the light of day in the early 90’s as a reaction to Sandman. But by the turn of the century he had left comics behind for educational book editing and writing, and would come to be greatly bemused as the internet age kicked off and found that there were people out there who were still pissed off at him for a silly kid’s comic he wrote over a decade earlier (the extent of his involvement in the creation of the franchise not being as well known at that time). But thanks to a few self-effacing interviews and more behind the scenes details coming out he’s generally more appreciated now (and frankly mostly keeping away from the franchise has helped, one bad brief return hasn’t done as much damage to his reputation as, say, all of ReGeneration One or Revelation did for Furman) and that’s the way it should be. Bye bye Bob. 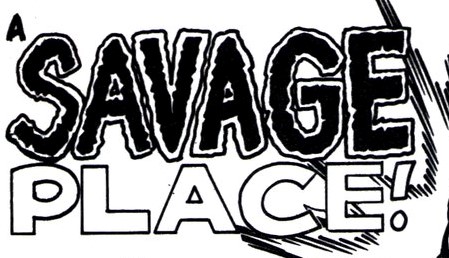 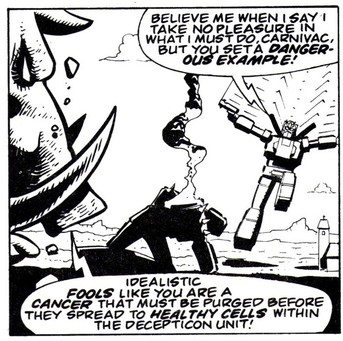 Who's afraid of the Not DJD?
In the black and white section it’s another farewell. But not to Carnivac as he’s saved by a Mexican (in a very Mexican hat) who crashes his truck into Octopunch in return for the Pretender having tried to save his own family. When he’s advised to run, Carnivac decides to stay and fight after not being prepared to fail anyone else after the soldiers last week. Whilst his speech about having spent his entire life running is nice, it does basically repeat the decision to make a stand he made last week, making for one of the few bits of padding in an otherwise excellent story.

For once the Springer cutaway is more interesting, as he has realised his mistake in letting Catilla go off alone. As with Carnivac and the soldiers, it’s unusual for a heroes mistake to have such brutal consequences, as if they had all gone off together the brutal climax would probably have been avoided. Again, Furman is being unflinching in not backing down from looking at the fall out from mistakes in war.

At the fight, Carnivac is doing well until Spinister threatens the humans again, forcing the renegade to act as a human..err...robot shield. Amusingly for someone who was on The List in the current comics, the speech Spinister starts and which Snarler finishes effectively makes them the precursor to the Decepticon Justice Division: An example needs to be set to stop idealism spreading like a cancer through the Decepticons. It’s a powerful moment, as is the gun going to Carnivac’s head and his last cry of defiance. 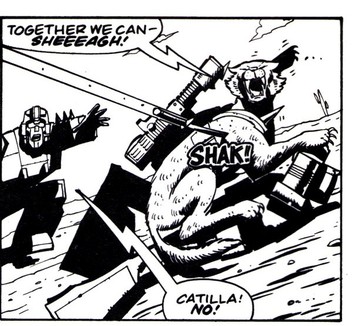 There's a reason the Collected Comics version of this used the "DEATH OF A DECEPTICON" cover.
Of course, as most readers would have expected, Catilla arrives to save the day. What is unexpected is the other Autobots don’t quite make it in time, and Bludgeon cheerfully kills Catilla with a sword through the shoulder (alright, it’s improbable that would be lethal, but what actually kills a Transformer is all over the place in fiction anyway). Carnivac’s reaction is, as you’d expect, pure rage and the swearing of revenge as the Decepticons flee with the just too late appearance of the Autobots.

This mini-arc has been extremely well executed, with lots of dark character development and a strong realistic tone. Not to mention one of the most memorable endings of the series, even Carnivac somehow knowing to blame Springer doesn’t distract from a blisteringly strong story. From next week (bar a lengthy unwanted reuse of old American material), the entire comic will be written by Furman, and this makes it look in safe hands.

Oh, and do I need to mention Geoff Senior is on blistering form? Because he is.

In light of the departure of a long serving writer, Transformation naturally decides to honour the occasion by again showing nothing but contempt for Budiansky’s work. After half the page is given over to the British story, we’re told that “After that, anything else just pales into insignificance...” before a token mention of the American story. Oddly the sidebar, when assuring readers their questions about the Classic Pretenders will soon be answered, seems fare more positive about the American story starting next week. Odd that.

"Better stories to come!"
The legacy of the promised but not delivered AtoZ continues to haunt the book; not only does Dreadwind have to explain it again (this time to Gareth Murphy of Downpatrick), but Transformation jokingly assures readers that this week’s promise of Ratchet and Ravage is definitely there. Which it is, luckily.

Dreadwind gets an example of Dreadwind Fails to Answer Questions Properly! pointed out to him by a reader as Ian Fletcher from Southampton notes you can buy Transformers Universe from your local WH Smith’s rather than just mail order. Dreadwind then comes so close to answering a question properly it hurts, as Ian wonders what the references to Transformers: The Movie 2 and 3 means for the “First Appearance” section of the film characters. Dreadwind gets right that this refers to the issues of the comic adaptations, but incorrectly claims it was a four issue series. So near, yet so far.

Oddly amidst all the guess work and near misses, Hi-Test feels confident enough to tell “Brooksie” of Farnham that Triton (from the Annual story Peace) turns into a submarine.

Combat Colin and Semi-Automatic Steve go to attack the Gunge after it begins terrorising Skegpool in the best giant monster tradition, all whilst unawares that they created it. The Combat Tank can stand up to anything...except a blast of acid from the monster. Pleasingly the next week box is in Combat Code: MVCG DVVP: XLORM FHVH SRH YIZRM!

In Action Force the undercover team manages to get into the cells where the hostage is being held...only to find the State Department have already arranged for his release in a secret prisoner exchange. Whoops. Whilst the attempt to be a bit political is appreciated, it does make the Forcies look redundant and adds a nasty taste to just how many MadeupCommieners they kill for daring to be guarding an empty room. Their escape seems doomed as they become trapped in a dead end ally with no escape and blimey isn’t this story over yet?

Next week, everything changes on the American story, so don’t be out to lunch as Furman arrives in the States. 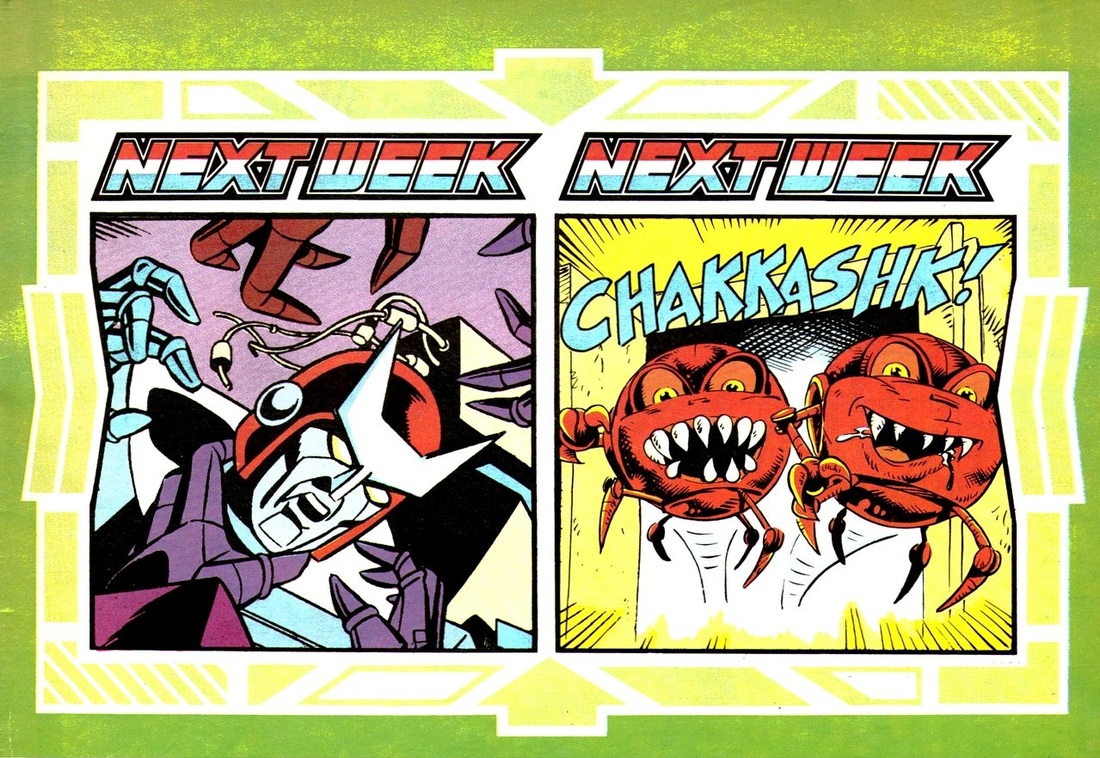