I Won't Let These Little Things Slip Out of my Mouth. 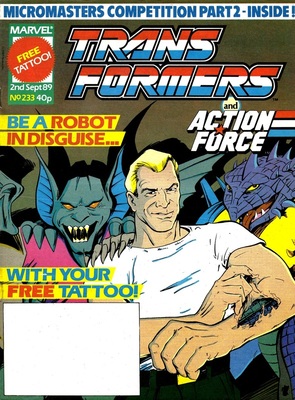 
As a free gift to lure in readers, a temporary tattoo is several legions ahead of a magnifying glass. I’m not sure they actual make transfers any more (kids today are too busy getting real ones, am I right Daily Mail readers?), but my own childhood is filled with happy memories of the way they end up as sort of especially resilient scabs as they get slowly scratched off over a couple of days.

Pleasingly—and again, unlike the magnifying glass—it’s even a thematically appropriate gift as Marvel UK have stumped up to have some special ones made that make it look like your skin has peeled off to reveal the robot underneath, just like a Pretender! Something emphasised by Jeff Anderson’s cover, showing a sinister smug human ripping off his flesh as Bomb-Burst and Iguanus watch admiringly. It’s nothing to do with the contents (bar some Pretenders being in it), but it does stand out.

And as a final thought I’ve just had about the magnifying glass, how silly was it to have that as a free gift the issue after the one with a character using a magnifying glass? At least promote it as Nightbeat’s own tool! 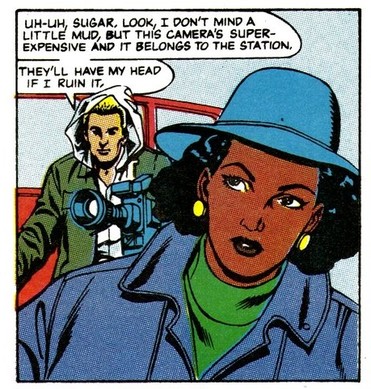 Nice hood Harvey.
Despite Transformation promising “Micro-Mayhem”, the second part of King ‘Con! features not a single Micromaster (though admittedly I’ve not checked with a Thuderwing approved magnifying glass. OK, I really will let that go this time...), being entirely about our new human supporting character and the Pretenders.

Following up on her interview with the red-necks, Cecilia Santiago decides to go into the swaps to find the monsters. Sadly her cameraman Harvey has clearly read Dinobot Hunt! and knows these things end badly, meaning he flatly refuses to go with her. But not before coming out with the sort of sexism that we’d like to think is absent from the TV industry today but probably isn’t. First he worries she might not like it out in the rain, then calls her “Sugar” before watching her go traipsing off into a swamp alone with only a photographic camera for company. Why did you come along for the ride if you had no intention to go through with the mission Harvey? You’re a dick.

In the swamp, we see the reason for the Decepticons play acting Deliverance and get a final bit of key world building from Budiansky: Their new Earth base under a garbage dump site. This of course replaces Ratbat’s much missed SPACE Island and will be a key location until we leave Earth for good.

Inside we get the first big indication this is not a story Uncle Bob has much investment in as we learn the evil plot of the week: Stealing energy. This cartoon staple is usually something Budiansky only falls back on when bored (see Aerialbots Over America!), stealing it from electricity is about as basic as it can get. However, this scene is unexpectedly home to the best moment of the issue. The plan involves Iguanus going to a mysterious designated site (see if you can guess where from the title of the story) whilst Skullgrin has to stay at the base and watch things. Which greatly annoys him as he wants fun as well. 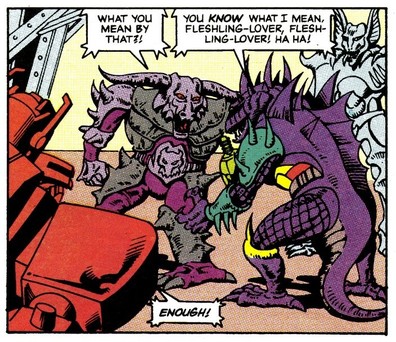 Iguanus is now my favourite Transformer.
Which leads to Iguanus invoking CONTINUITY by mocking Skullgrin for becoming a film star and doing a little dance whilst chanting “Fleshling-lover!” repeatedly. It’s frankly awesome, but more importantly not only builds on what we already know about Skullgrin, but also gives Iguanus more personality than he’s otherwise shown in over a year of being in the comic.

These two plots meet as Cecilia makes it to the spot on the surface where Skullgrin has to stand guard watching things. When the about to depart Iguanus see and grabs her, it turns out Skullgrin actually does like humans as he first makes excuses for not killing her (and as a kids franchise where the villains often make tortuous excuses not to kill humans it’s nice to have this lampshaded by Iguanus basically going “Our plot is going to kill lots of humans! Who cares?”) and we get a decent faux cliffhanger as the two Pretenders wrestle over her. It’s funny, but still full of surprisingly decent character development.

Despite the basic plot showing Bob’s not that bothered about the book right now, this continues to be better than I remembered and has a really nice low key breather story quality to it. As it’s mostly humans and monsters, Delbo does solid work on art as well. 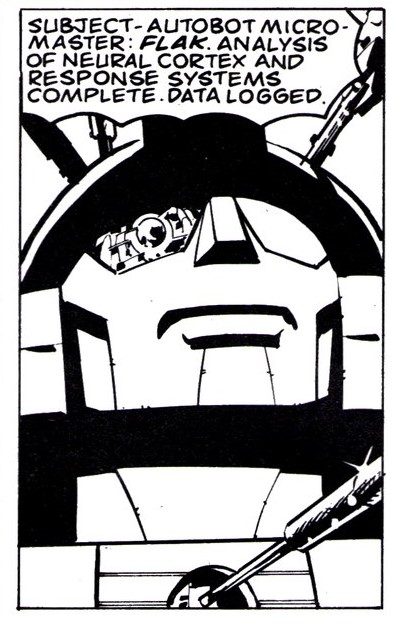 Looks like he's in for some Flak.
The big news though is over in the black and white section: The return of Geoff Senior! It’s been 20 months since his last work on the series (bar covers) on The Legacy of Unicron! and it could be argued that this is a rather inglorious retreat in the wake of end of Dragon’s Claws, the prodigal son forced to return with his attempt to take that next step up the ladder having fallen apart.

However, whilst it’s not unreasonable to assume he’d rather he’d have the giant robots behind for good, this is not the equivalent of Don Figueroa sheepishly and reluctantly returning to IDW after his attempt at a non-Transformers career petered out. Senior is a professional at the top of his game and his work here shows not even the slightest sign of him being a bit rusty. Which is especially impressive when you consider he’s drawing characters that are all new to him.

The sheer dynamism that made him—and restores him to being—the books best artist is evident from the first page of A Small War! Part 2. It’s a simple layout of the Battle Patrol being hung up from the ceiling, each with a different section of the body (chest, eye, arm and legs) open with wires cut into them, analysing their special Micromaster design. It’s creepy and unnerving—especially Flak’s blank face with his missing eye—and instantly makes an impression despite literally being a page of characters being motionless and not talking.

Furman adds to the unsettling feeling by having an emotionless computer voice describe each of the tricks it has learnt from their bodies, all contributing to the feeling these beings we were introduced to as likeable characters are being treated as little more than commodities in the most cruel way. You almost don’t need Thunderwing lording it up over them in a gleeful way, though Senior again nails the pose of what will become a key character for him to draw.

Outside, Road-Handler and his team plus (in what must be a deliberate piece of gallows humour on Xaaron’s part) the Rescue Patrol are about to take on their mission to blow everything up real good. But of course he won’t go through with it in what is probably the most stock part of the issue. 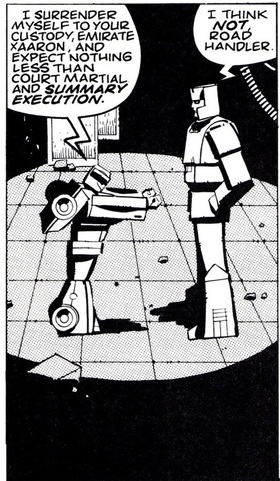 Not a good offer to make Xaaron most days.
Amusingly with all the business about avoiding security systems last issue, here the two teams just blast their way in, seemingly without meeting any opposition. Maybe Thunderwing only had that one guy working for him? Either way, the future Con leader decides this is the perfect chance to test his own new Micromasters. Which leads to a glorious panel revealing the Air Strike Patrol, filled with an easy menace despite them, once again, just standing and posing with guns.

Road-Handler sadly doesn’t take this opportunity to indulge in some fisting, instead doing a simple but effective trick of dropping the Xaaron bomb in shock and pretending it’s been set off...which distracts the Air Strike and Sports Car Patrols enough for them to get the upper hand and allowing them to escape with their comrades. Oddly, despite having show he can deal with four Micromasters with one hand-swipe last week, there’s no attempt from Thunderwing to stop them. Though he is having to run the entire base himself so he was probably having to clean the toilets when this was going on.

Things do close out nicely though, as Road-Handler hands himself in for court martial and summary execution. Which keeps the recent trend of a more realistic approach to military politics alive. In other circumstances, his superior’s very Prime “I was wrong and you’ve reminded me all life is sacred” speech would seem very pat, but it actually carries some weight coming from Xaaron just because of the shock value in him admitting to have made a mistake.

This is a solid, if not spectacular story made by the stand-out art and some nice character moments. Some of the plotting is a little neat, but overall this two parter sets up the Micromasters nicely and leads into into their issues with authority as shown by Budiansky last week very well. I suspect many kids reading really wanted the three Micromaster teams advertised on the back page as a result of this.

Transformation is oddly written this week, with various strange attempts to speak in a way down with the kids. The most baffling phrase being the description of the comic as “Ozone-friendly”, was that a slang expression ever? Or did it literally mean the comic is good on the environment?

Combat Colin has his walk in the park ruined by a smog machine robot called...Smog Machine. Sadly in the pollution Colin fails to pull out his Portable Purifier and instead grabs the Mega-Cannon of Destruction. Which takes care of the robot, but creates even more pollution. So not that ozone-friendly. Rather wonderfully the bottom of the page is given over to a schematic of the Mega Cannon (“You pull the trigger and it goes bang”). 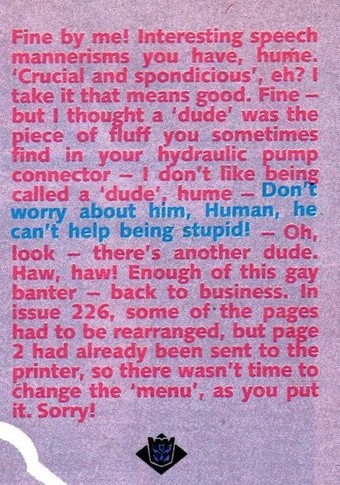 Having a gay old time.
Fittingly this issue sees the delayed Rampage and Ratbat AtoZ as Dreadwind gets a letter from Ferhaan Mahmood of Luton asking about the original Transformation (or “Menu” as he calls it) mistake back in issue 226. Amazingly Dreadwind gives a sensible answer about the contents having to be moved about after the lead page had already gone to print.

Whilst arguing with Hi-Test in the reply Dreadwind even manages to get the quite extraordinary “Enough of this gay banter” into the page. Which, unless the writer was incredibly old fashioned even by 1989’s standards, shows the trend for slipping things under the radar that will culminate in an amazing shag pile carpet joke.

Of course, we still have to have an example of Dreadwind Fails to Answer Questions Properly!, as Dreadwind fails to answer a question from David Gilyeat of Bicester about how Prime can look like his original body in the film and the Shockwave Aspects of Evil! story. He even makes the sensible suggestion Prime reverts at some point (which is basically what will happen thanks to Generation 2), but Dreadwind instead makes the odd claim the original body is the smaller robot in the Powermaster toy. This despite the fact that as recently as last issue we saw the little PM Prime actually has a different character model and they’re not the same.

In the returning Action Force the plot finally kicks in as a Cobra team led by Firefly steal the Vector jet and Slipstream has to pursue in the biplane for REASONS. Though Action Force’s complete lack of security when at the air-show it quite funny Hama’s clear love of the local area the story is set in (I’ll bet this was a real regular air show) results in quite a dull travelogue as he insists on having every landmark from a castle to some especially uninteresting cliffs.

Next week it’s possibly the most contentious black and white story as Furman attempts to deal with what he perceives to be The Arcee Problem. 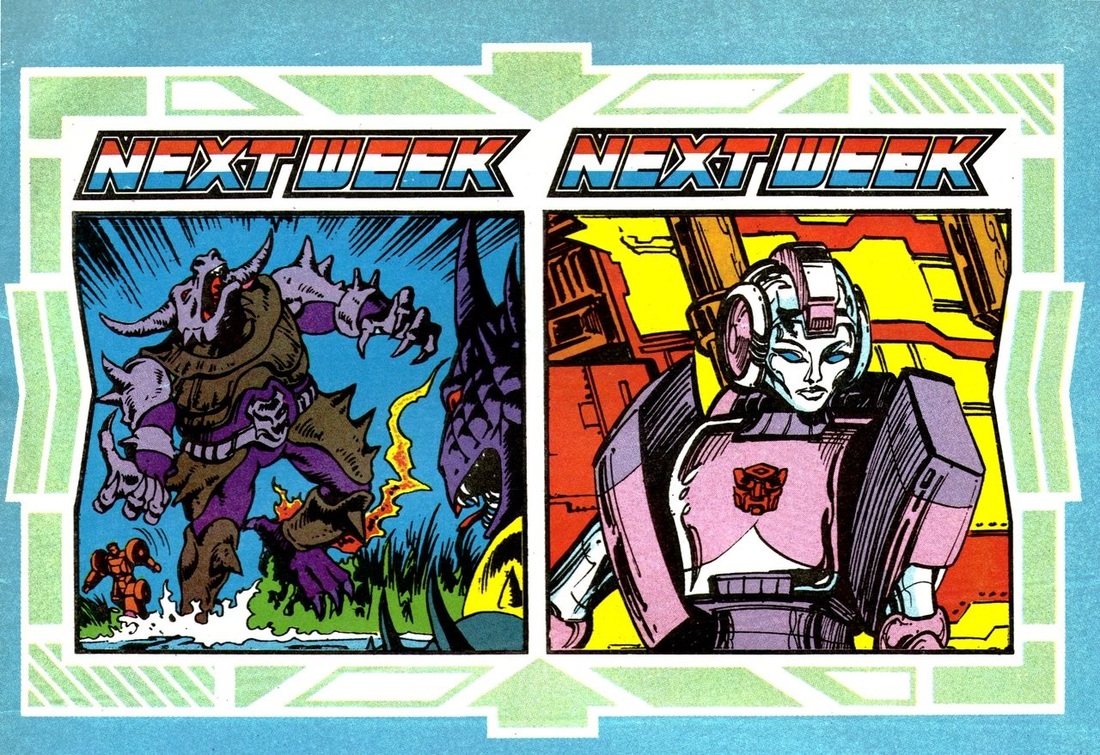 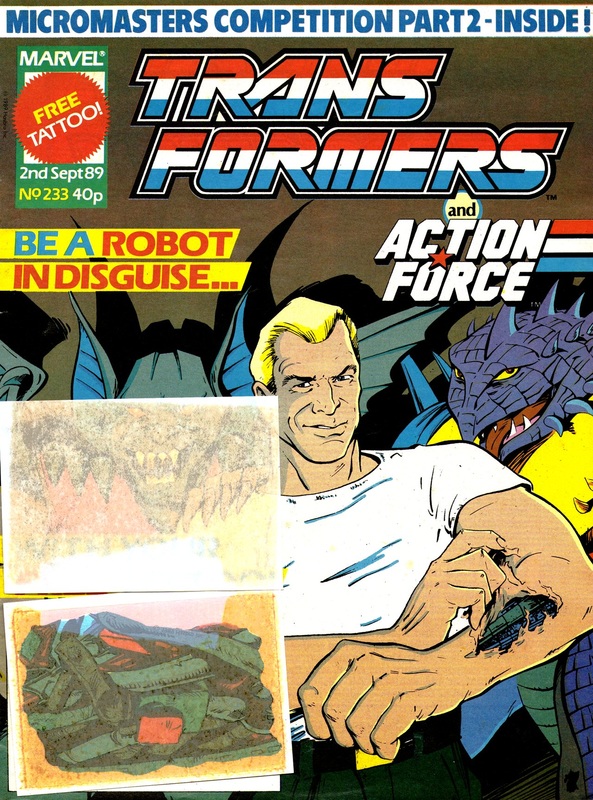