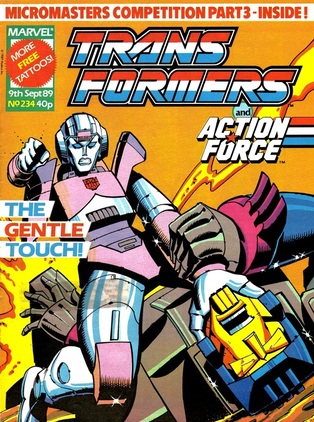 
I believe Optimus Prime, the term was “Sexist.”


The joy of revisiting any fiction is how you experience it is shaped by the circumstances around you at the time. As you grow and evolve your world view things can read completely differently, classics can become embarrassing, a neglected gem can find new respect. And things that once didn’t even hit you as slightly bothersome can become very uncomfortable.

As attentive readers will have noticed I’ve been surprised more than once over the course of this project at how my reaction to a story has shifted since the last time I read it. That of course is down to the added context that comes from reading everything in order for the first time. But there isn’t a single issue in the entire run on which I’ve changed so drastically over years as this one. Which is something that left me rather worried going in, where would I end up this time? Especially as there are fans out there who get very angry if you suggest the way Furman handles Arcee is less than ideal.

But before that, it’s the colour story! Where ironically—considering his writing for human females has always been worse than Furman’s (you never get the feeling Simon is working through his issues with old girlfriends as is often the case with Bob)—we get Budiansky’s best female character by a country mile. 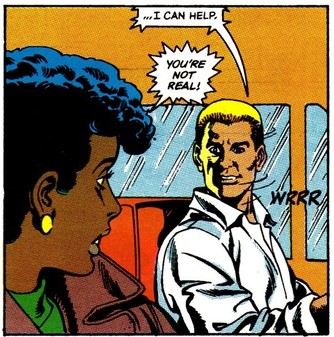 We've all had that blind date.
The third part of King ’Con has a somewhat odd opening as Micromaster Mudslinger interrupts the Pretender fight and confuses Skullgrin who seems to not know what a talking car might be. Well, he was never the brightest. Some odd self-introductory dialogue for him and the rest of the Off-Road Patrol couple with some poor visual storytelling where it’s not exactly clear what Mudslinger does to hurt Skullgrin (he electrocutes him with...his wheel?) and it’s not the greatest start.

Things pick up though as Cecilia runs off and—realising she might know something useful—Mudslinger gets on the phone to Road-Handler to intercept her.

As has already been noted, feisty female journalist is a fairly stock character to the point we’ve already had a recurring one on the book. But in the context of Uncle Bob’s stories where his regular female characters include a nudist in sellotape and a girl whose main function is to tell Buster how great he is, this is a distinct improvement. She’s smart enough to suss Road-Handler’s facsimile construct, quickly adapts to the situation and tells them what she overheard (that something is going to destroy midtown) and even deals with the Autobots confusion over a toll booth sensibly in a quick comedy scene. Considering the back half of the issue is going to try so hard to convey a “Girls are just as good as boys” message, this does a lot more by showing rather than telling.

There’s nothing especially ground-breaking here, a reporter teaming up with four hot-heads means it can’t help but feel a bit Teenage Mutant Ninja Turtles, but it’s fun and it actually winds up quite fitting that the big cliffhanger is the Autobots being stuck in traffic. 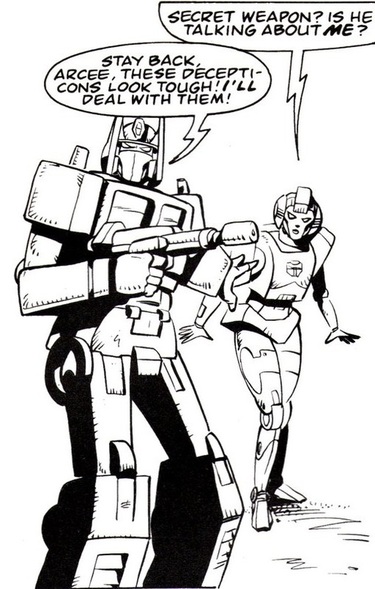 "For the sake of this story's broken Aesop I shall become sexist for the week!"
For the black and white section...

Well, let’s be upfront here, I absolutely think Prime’s Rib was written with the good intention of not only explaining Arcee (which feels a bit pointless three years after the film and with only one more appearance for her to go) but to deal with many of the oft-repeated complaints about her and to make a point about equality.

Well, as I said I loved this story when I first read it. For the simple reason that in 1995 (and to add to the confusion about Prime’s future bodies, here he’s the small Powermaster) Optimus is confronted by feminists who hate the male orientated bent of Transformers and whom he tries to placate with Arcee.

As I’ve noted before, my mother hated Arcee, and every single one of her complaints is repeated almost word for word by the crowd of ladies here (“Why pink?” being the most pertinent one). So seeing her effectively satirised by the book was deeply amusing to me, because lets face it, when your a kid who loves something your parents dislike you’re going to be more on its side.

When I got a little older and joined fandom and heard complaints about the sexism on display here, I always defended the story as a send up of Hasbro, that the feminists were right and that the comedy comes from Prime/Hasbro badly misunderstanding their requests for being more inclusive by coming up with a horrific curvy parody. Which in retrospect is a view that is more demeaning to the character of Arcee, making her nothing more than a punchline.

Nowadays... I’m inclined to agree with my mother. As noted the idea is fine—everyone initially thinks Arcee is weird and strange but she quickly proves herself. Though the fact that, despite the poor début in Space Pirates!, Arcee was shown to be a perfectly capable member of the team with no fuss or bother in both Time Wars and Aspects of Evil! makes this a rather muddled and redundant “Twist”.


Of all the characters in this story, it’s Hot Rod who takes the fairly sensible route of not understanding why humans make a fuss of gender and why Arcee isn’t just treated like any other warrior. Unfortunately he has to put up with Jazz (who despite being referred to as “He” actually has no gender and should really be incapable of sexism) making jokes about her chest. That’s from Jazz, who has a chest that would put Jordan to shame. 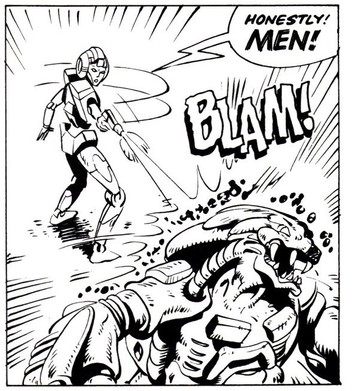 That's not a man Arcee! Everyone else is genderless!
Then Shockwave and the Junior Decepticon Headmasters attack to destroy the PR exercise and they start mocking the “Secret Weapon” despite presumably having no idea of gender either.

And then Optimus Prime...sigh. Optimus Prime tells Arcee to stay back because these Decepticons look tough and he’ll deal with them. In any other circumstances you might be able to put this down to his normal concern for his troops that will always see him place himself in danger first, but coming right after he’s been flat out called a sexist it’s hard to read this any other way.

This out of character moment from the guy who defends the rights of all sentient beings (and has no idea of gender) has the effect of so pissing of Arcee and filling her with anger at men she successfully beats up all three Headmasters alone, despite them winning against Prime, Hot Rod and Jazz. Yes, hatred of men is Arcee’s secret weapon. Hmm.

Though, and perhaps this is a strong indicator of why this story has aged badly as more fluid ideas of gender are more mainstream now that they would have been in '89, the ludicrousness of the situation is added to by the fact none of the characters Arcee is berating for being men are actually men in the human sense.

The whole story can best be summed up by Hot Rod in the end where, after comically walking into Arcee during the battle, he comes down in favour of women and still gets called a sexist pig. Despite having treated Arcee no different than any other Autobot. His thought bubble of “I’ll never understand women!” is a groan inducing moment that should have wah wah wah music over it.

The shame here is the attempt to do something positive with Arcee ends up not only falling flat but actually winds up feeling quite sexist—the message of the ending is feminists can never be made happy so why bother? Considering how accurately Furman got my mother’s voice in the opening these are presumably complaints he had heard a lot, either through the letters page or at dinner parties where his profession came up, and it just comes over as him being sick of it and wanting the complainers to shut up.

The character of Arcee was off-putting to potential female fans and though that isn’t directly Furman’s fault (and perhaps that’s why he’s taking the chance to vent here, people complaining to him about a character he had no part in the creation of) the flaws in only having one female lead character amidst the heroes and her being a pink love interest was a barrier to half the population enjoying the franchise. Any female fans of G1 were in-spite of Arcee not because of her, and how many more might there have been if she had been better handled or if she hadn’t been so token? As an attempt to deal with these issues this rather trite, obvious story only makes things worse. And that’s a shame.

On art, Andrew Wildman is on unusually poor form despite drawing a fun smaller robot PM Prime. Most notably he makes Arcee look like the late Pete Burns with her ridiculously thick lips.

WHEN IS THIS COMPETITION OVER.
Transformation sets the tone by talking about the “Battle of the sexes” as if the great lark. On the sidebar the comic has to break the news about the end of Action Force monthly, but promises Marvel aren’t going to let it die with something coming along in the New Year. My memory may be faulty here, but I don’t believe this comes to pass.

Speaking of Action Force, Hama’s tour of his favourite parts of New Jersey continues, with even a “Thank you” credit given to the real life Accord Speedway that the biplane lands at to refuel. Maverick proves to be an idiot after they loose the stolen plane after it mysteriously instantly vanishes by the river, with only a barge in sight...can you guess where it went kids?

Combat Colin (wearing a Prisoner penny farthing t-shirt) is on holiday in Blackpool, but like every hero on holiday he runs into crime as Professor Madprof tricks him into sitting in a deckchair that snaps in half to trap Colin and Steve.

Luckily Colin has his Combat Woodworms on him, enabling him to break out of the chair and chase Madprof, who falls down a hole dug by a small child. A very deep hole. So deep he doesn’t hit bottom till after the sun has set. Leading to the boy being admonished by his mother (“I told you not to dig that hole so deep, Tristram!”) and Colin and Steve to say how much they dug his style. Bonus points on this one for Steve’s ridiculously big candy floss.

The September Classics Covers Calendar (which Transformation sheepishly admits is two days late) features Geoff Senior’s 130 art and—along with the Micromaster competition—means there’s no room for Dreadwind again. The comic seems rather tired of the competition, “You’re probably sick of the sight of those Micromaster symbols” and “We’ll tell you what to do with them—nicely!” both suggest a certain weariness.

More enthusiastically, we get more tattoos! This time of the Autobot and Decepticon logos, effectively the inspiration for every real tattoo every fan starts off with.

If this issue is one of the more contentious ones, then next week’s is one that is universally well regarded. Next Friday, meet the Deathbringer! Also, my first professional short story is out now, READ HERE for links (which have also been added to the bookshop). 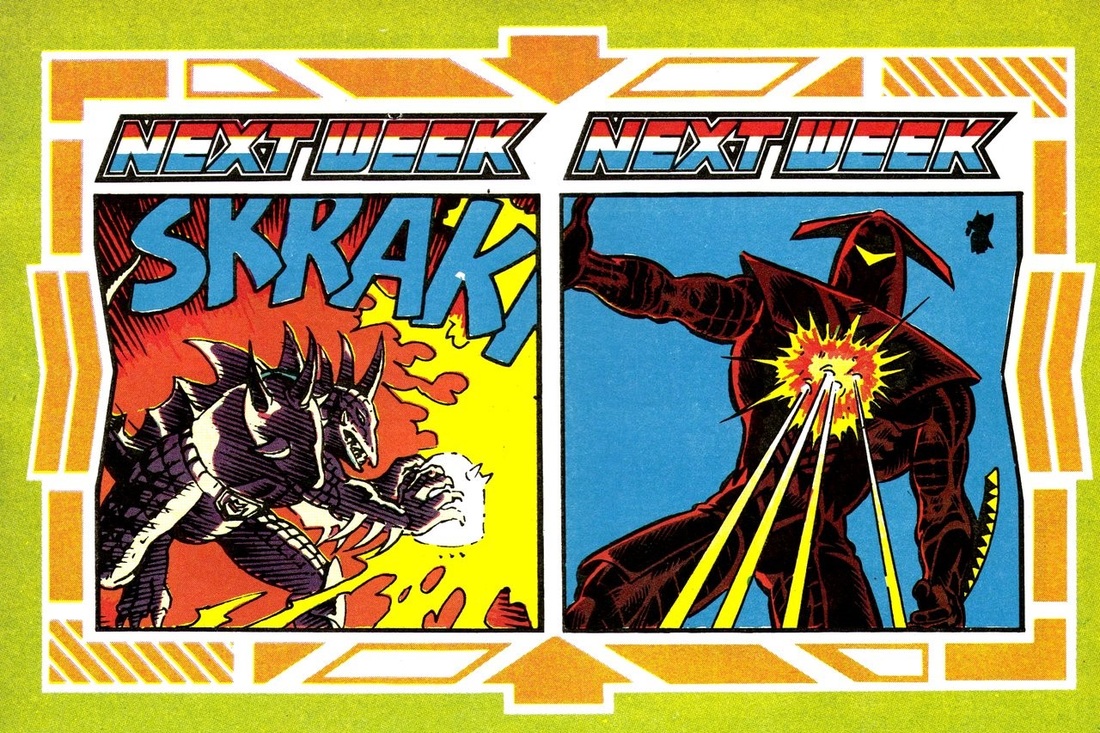 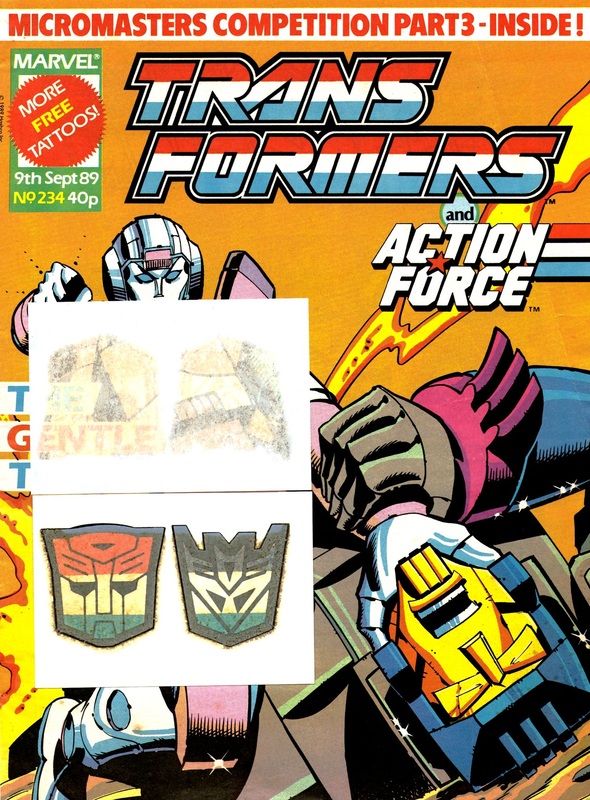 With the free gift.