All the Small Things. 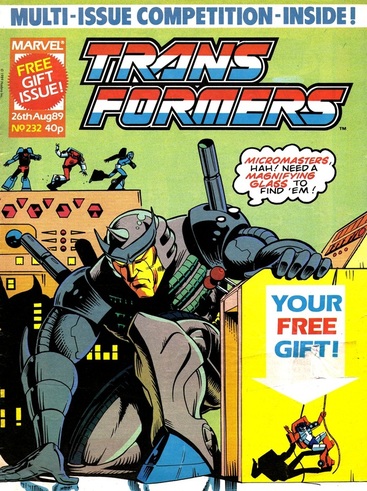 It’s like I always say, Big Shot, size isn’t important—it’s how much fire-power you pack!

With this issue we reach a hugely significant moment in the history of the book, though as with when we reached the halfway mark it’s one it would have been blissfully unaware of at the time.

Yes, we now only have 100 issues left to go before reaching the end of the series. From here on in every week only has double digests left in my mental countdown. Obviously with various mop up pieces to deal with covering Annuals and reprints and continuations Transformation won’t be ending in exactly 100 weeks, but it really does feel as if we’ve cleared one of the major final staging posts in this ridiculous journey.

And what better way to celebrate this milestone that with a magnifying glass? Yes, it’s the single most rubbish free gift of the entire run and something far more in keeping with the sort of tat that gets stuck on UK comics now (which is clearly all made in one factory and gets shared out amongst every comic with a different logo slapped on them regardless of relevance). My copy is sadly missing this alleged Micromaster hunting device (Micromasters are seven foot tall lest we forget) so maybe it was far more awesome than the idea seems, but I suspect it’s more likely it was best used to look for all the fucks readers gave for it.

Certainly it results in one of the Lee Sullivan’s worst covers, clearly “Draw something to heavily promote a magnifying glass” didn't fire up his passion. 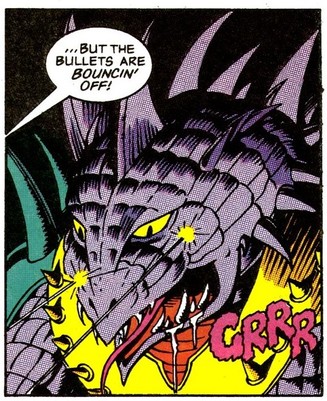 Like something out of a monster movie...
The bigger draw would have been the return of new colour Transformers action, and indeed cover to cover robots for the first time since Headmasters. For long term readers at the time the book must have felt value for money again and—even though I wouldn’t have thought about it on a conscious level at the time—for this newbie for whom the reprints weren’t old rope the fact the two lead strips were coordinated to work together helped the title feel more cohesive and of a whole than it had for some time.

As indicated by the title, King Con! follows in the footsteps of The Big Shutdown! by being a homage to a particular movie. Though in this case the spoof is not as all persuasive and won’t become apparent until later in the story. Though it’s almost certain that Budiansky came up with the title first (a pun worthy of me) and worked the end of the story around it.

What does stand out, and is almost certainly a coincidence, is how much the opening here resembles the cliffhanger to the Prologue of Target: 2006: Three locals with guns and dogs searching a swamp (in this case New Jersey) during a storm, only to get confronted by a monstrous Decepticon. Igaunus however is no Galvatron. Indeed, he’s barely a Scourge. Despite the odd familiarity it’s a well done sequence, with Delbo clearly having some fun on the moody splash page.

The main difference from Furman’s take on the idea is that Galvatron let the humans live out of contempt once he’d gotten the information he needed. Here Iguanus actively tries to kill the farmers looking for the “bear” that the police haven’t been bothered to deal with, only to fail to shot them at point blank range. Those Pretender shell hands must have trouble holding their guns. 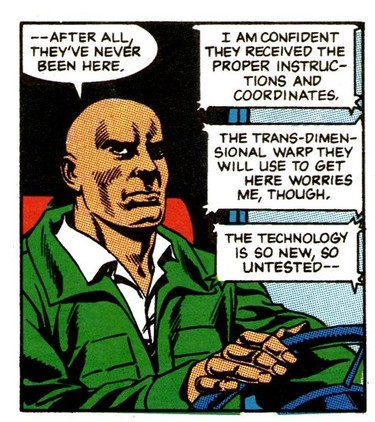 Patrick Stewart's new look in the Logan trailer surprised everyone.
This leads to the big scene of this instalment as we’re formally introduced to the Micromasters after weeks of them filling crowd scenes. Optimus has called for reinforcements from Cybertron via a new Trans-Dimensional Warp (which will become important in future stories). Naturally the best place to welcome such arrivals is on the Ark... no wait, he has them materialise at a truck stop. Out in the open during the day. Despite the technology being untested and dangerous and presumably a risk to any passing humans if it goes wrong. This is the same thinking that led to Prime meeting Chainclaw in a field, perhaps he’s developing claustrophobia?

Still, and brilliantly, we get Hi-Q (who has lost some weight and developed a square jaw since we last saw him out of costume) disguised as a trucker in a fetching green bomber-jacket. Presumably he misses his Elton John threads as he’s a bit of a dick throughout, including being rude to some Transformers he’s only just met (“He’s so small—”).

Oh, and as an aside, not wearing his armour confirms that—unlike in their profiles—Powermasters can transform without their partners.

Turning up in a blaze of light, two Micromaster teams of four arrive: The Off-Road Patrol and the already known to British readers Race Car Patrol. Like Hi-Q, Jose Delbo knows these guys are small, and so draws them to the right scale for the first time in the comic. Which makes for some nice striking imagery as Prime towers over them, but—and not for the last time in this issue—the surprise value only comes from forgetting we’ve already seen Transformers of all sorts of sizes including near human. 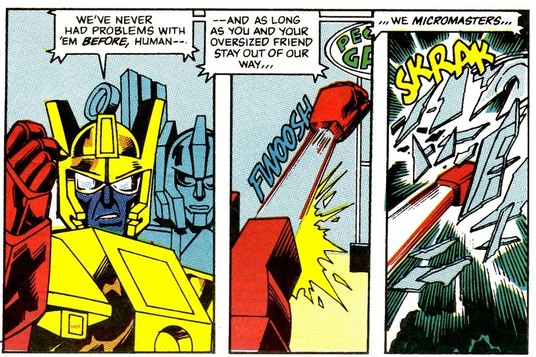 Popular at parties.
In terms of character, it’s quickly established that the Micromasters have Big Masters sized chips on their shoulders, having barely disguised contempt for the very (in their eyes) old fashioned Prime. Hi-Q constantly insulting them to their face (“They answer to no one! How can we trust them?”, though everyone calling him a “Human” doesn’t help in the opposite direction) only adds to the tension.

The plot gets introduced right at the end: Presumably as a result of having missed Skullgrin walking about the woods and becoming a movie star, the Autobots now seem committed to chasing up any stories of giant monsters, no matter how vague. So when the three survivors of the opening attack go on the Cecilia Santiago show (basically the American version of Joy Meadows), couple with odd weather sees Prime send his desperately needed new recruits to look into it.

The cliffhanger is then another insult from Hi-Q (“They wield their independence like a club! I don’t like it Optimus”, someone is upset they’re not the new toy anymore) and a strange statement from Prime that they “Have not seen the last of the Micromasters”. Still, this is a solid opening, especially considering the reputation the final two Budiansky stories have, even if it’s not quite the brainstorming adventure you’d want after such a long absence.

Amusingly, the NEXT box promises Stormbringer next week, something for the IDW fans to look forward to.

Would he say that to Rumble?
The black and white story, A Small War!, is designed to provide back-story to our new leads and their creation by going back 14 months. Incidentally after my thoughts on the matter last week, nowhere in this first part is Thunderwing called “Decepticon leader” and Transformation emphasises he’s “Commander-in-Training”. Having sneakily looked ahead there’s only one instance of him being called Decepticon Leader in the whole story suggesting a simple mistake exaggerated by my memory.

At Thunderwing’s base the Battle Patrol are on a super sneaky stealth mission to infiltrate the building without being seen. So naturally they start by blasting the guard on duty to pieces. This is especially odd as what follows is at pains to show us how none of the Decpticon security measures are capable of detecting their small size and weight. Because again, all previous Transformers were the same height.

The actual mission they’re on seems a bit vaguely defined, Xaaron (hilariously described as a “Smart cookie”) thinks the Decepticons are building their own Micromasters and so sends them in to... check? Destroy any mini-cons?

The joy here though is Thunderwing. Who yes, has been trying to build his own Micromasters and has been expecting his guests, much to their shock as if they’d never expected an exploded guard to be noticed almost at once. Unlike in the last two weeks Thuderwing is smart, calm with a sense of humour and feels far more credible as both a leader and a starting point for what Furman will do with him on the American book. Amusingly with the story having built up their powers, when the Battle Patrol decide to go down fighting rather than use their self destruct hips (!), Thunderwing just swats them aside with one slap and sends them away for dissection so his technicians can find the secret of small Transformers. Of which there are no others.

If only the Battle Patrol knew the headmaster trick...
The cliffhanger sees Road-Handler (without the hyphen here, but I’ll be consistent) expecting to be sent on a rescue mission by smart cookie Emirate Xaaron, only to be told he’s to stop the technology falling into ‘Con hands by destroying the Battle Patrol...

Despite some quibbles, this is quite good fun and has some great little gags and visuals from Jeff Anderson on art. Whilst not up to the standards of the last two weeks it does continue to show how the new format has settled down to a fairly consistent level of quality.

Amusingly of course a large role is given over to the Micromaster sized Ratbat, completely undoing the attempts to make those guys seem unique and awesome. 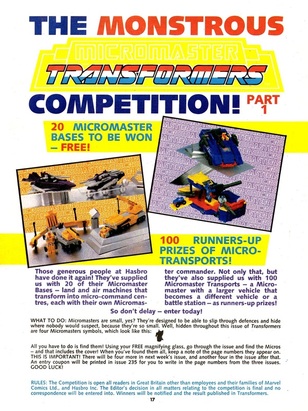 Gotta catch'm all.
There’s no Dreadwind this week as his page is given over to a massive four issue competition for Micromaster bases and transports. Hidden throughout the comic are four little Micormaster shadows (based on the as yet unseen Whisper), which the reader needs to find and make a note of. It’s a fun idea, though sad to say I’ve yet to spot them all.

Combat Colin goes to a disco with Semi-Automatic Steve and the Giggly Sisters, only for the evil D.J. Yampy to use his music and lights to hypnotise the crowd. Luckily Steve saves the day after being in the toilet thanks to a saucepan of lemonade (!), and after Yampy has been taken out he and Colin run the disco with an old gramophone of Roll out the Barrel... Which the Giggly Sisters love, even if no one else does.

We also get a full page advert for The Sleeze Brothers in the style of those one page comics we’ve previously had for things like Death’s Head. It makes the comic look terrible, and we get a good idea of how well these promos work as the tenth and final Death’s Head is also out this week. So much for advertising, yes?

Next week, we have only 99 issues to go! 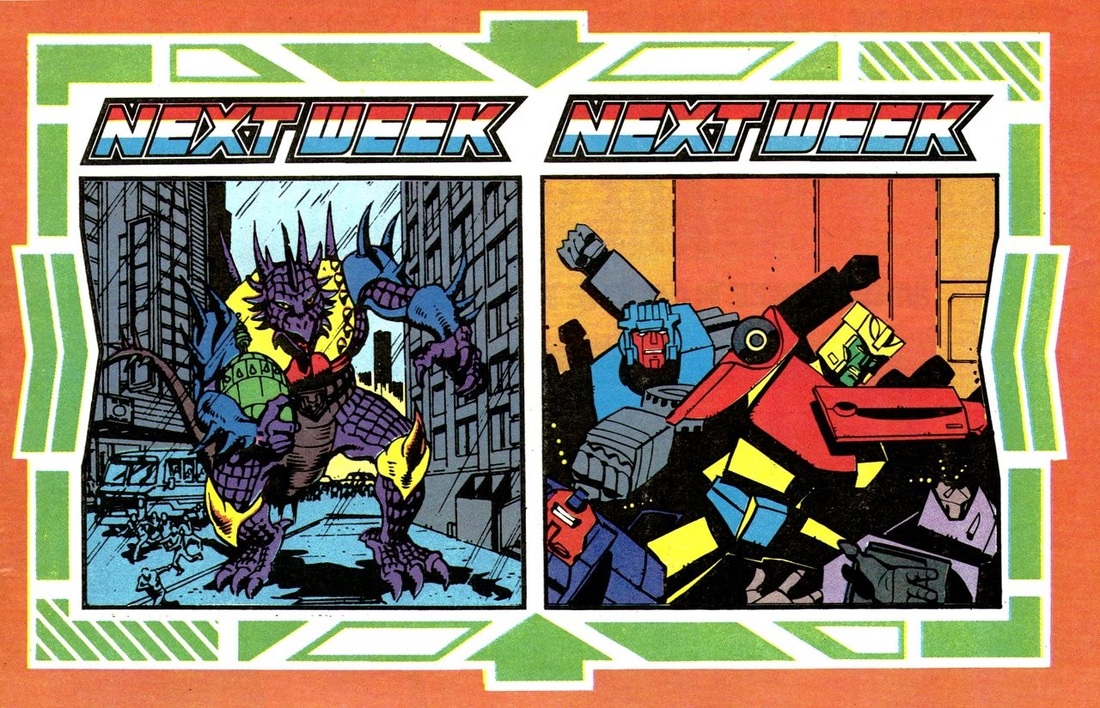 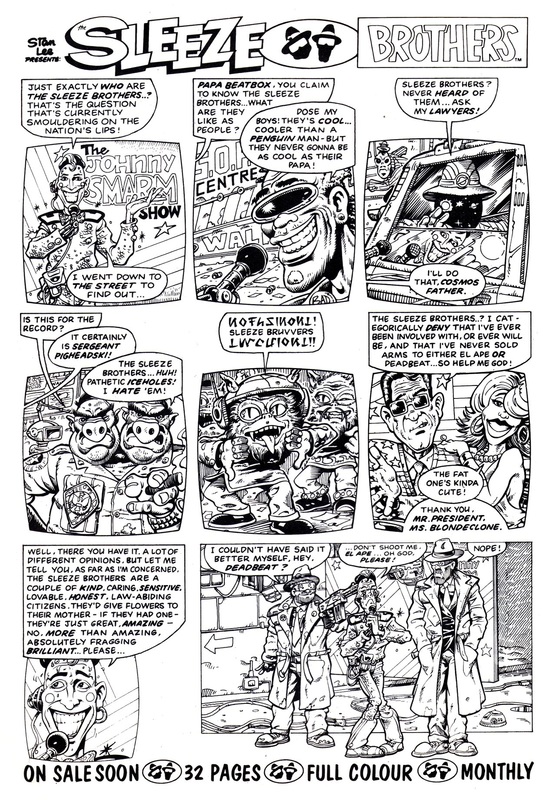