Some Times, Some Crimes, Go Slipping Through the Cracks. But These Two, Gumshoes, are Picking up the Slack. 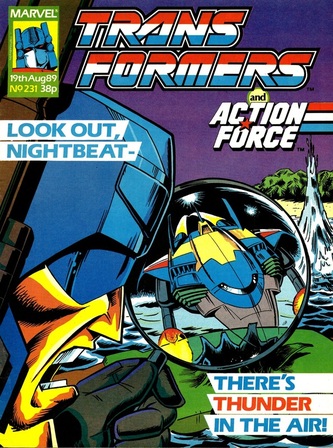 
One of the things I only touched upon lightly last week amidst the Chandler pastiche (don’t worry, I’m not one to push my luck by carrying it on) was that I have no memory from childhood of Resurrection! after that first part.

Why is a bit of a puzzler, it’s a strong dynamic story with some great visuals with even the faux cliffhanger created here of Prime confronting the confused Megatron in his own fortress with the intent of killing him being striking. There’s no way it shouldn’t have stood out in my mind, but instead for years I was convinced this reprint must have coincided with a later run of the black and white stories my memories were a bit fuzzy on as well.

The important thing though is that there’s still another week to go, as backed up by the Next Week page. But Transformation once again promises two all new stories in issue 232. The only hint of how this will be resolved is, after a false claim last issue, that Action Force will be skipping a week.

His main character development will be shooting his own troops instead.
In the original content, the impressive thing about the second half of The Big Shutdown is how Furman manages to keep up the veneer of the love letter to Chandler despite the need to focus on another new character and a big action scene. There’s not as much space for Furman to indulge himself, but he still manages to keep up the first person narration in the right tone of voice and even throws in a neat tortuous analogy (“He was as inconspicuous as a tarantulas on a marshmallow!”) as well as a nod at Holmes with the quote I used above.

There’s also a rather fun conceit in the gag that Nightbeat solves the basics of Playback’s murder—that he’s a Decepticon prisoner who has been hunted down and killed by a powerful ‘Con—from examining the body, only for his work to be pointless as Siren has already had the key exposition delivered to him and he drives up and just flat out tells it to his partner.

The bulk of the issue though is built around selling the character of Thunderwing. If Nightbeat jumps out of the page fully formed, Thunderwing more stumbles out like a drunk at last orders. He’s an insane snarling thug who never uses one S in the word yes when two will do. This will create something of a problem when he appears in the American stories and undergoes an arc about his descent into a similar state. By starting off half-cut already he pretty much has nowhere to go. Indeed, the line about all of this being a test to find out if he’s suitable to become the new Cybertronian Decepticon leader feels like a last second afterthought, as if Furman suddenly had the idea for his role in the American series halfway through writing this and threw it in. If Thunderwing was just a thug with a gun hunting escaped prisoners his behaviour here would make much more sense than the idea any theoretical Decepticon authority would let him get to the final of The Leader Factor.

This might explain some of the oddities of this whole process that will be thrown up by next week requiring all of this to be set at least 14 months ago. Or back when either Ratbat or the Triumvirate would be rulers on Cybertron. Though for kids reading this unawares of that, this would be the first hint that something must have happened to Megatron since he set up shop there earlier in the year. 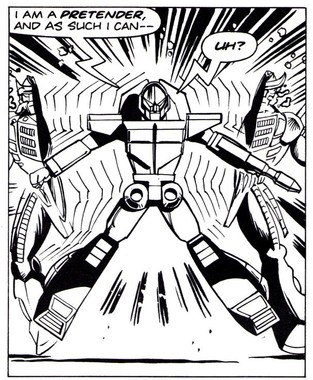 Quite a shock to American readers.
Oddly for someone being set up as a new lead villain, the issue also aims to make Thunderwing seem as useless as possible. First, despite killing Horsepower he fails to inflict more than a flesh wound on the weedy looking Hosehead, and actually gets briefly distracted by the fire engine Autobot shooting his white sticky foam in the Decepticon’s face.

This is the start of the indignities for the Pretender (and in one of two examples of this story using a gimmick that by this stage would otherwise be ignored he gets the foam off him by breaking out of his shell), as the end of the story sees him taken out by a sub Scooby-Doo trick.

With Siren having (rather wonderfully) annoyed Nightbeat for having failed to avoid getting chased by a demented psychotic killing machine to the beech, he decides to “Use his head”... and as Thunderwing arrives he’s confronted by Playback rising up out of the sea and basically going “Whooooooooooo!” and completely scaring the living shit out of the Con who would be king. And I’m not sure why, this comes less than five minutes after he was confronted by Hosehead; an Autobot he thought he’d killed only to turn out to be actually OK. And he didn’t scream like a five year old confronted by a killer clown (soon to be dated topical reference!) then.

Of course, Playback isn’t the walking dead, but just a Headmaster like Nightbeat, and his partner Muzzle is controlling him. Which turns the whole thing into a Weekend at Bernie’s pastiche, which feels like a very different place to where we came in. Still, Nightbeat uses Thunderwing’s cowardice to get the corpse close to him and then shots the deceased bot’s power supply...sending Thunderwing burning into the sea and allowing for a terrible “Use your head” pun. Who would do such a thing? 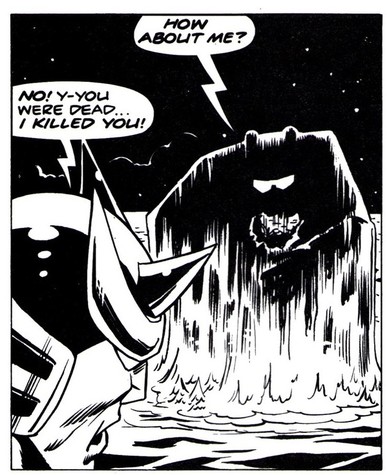 "And I would have gotten away with it too if it hadn't been for you pesky meddling cunts"
If not for the fact he’s going to be an important character, Thunderwing would be a rather fun one off brute here, and Lee Sullivan makes the rather silly looking knight with jaundice outer shell more imposing than it should be. But as someone who is not only going to be significant but have a very specific through-line, it rather gets him off on the wrong foot.

This coupled with the downplaying of the Marlowe feeling for a chase scene does mean this second half isn’t quite the equal of the first, though as a whole it’s still a fast paced fun story that introduces one of the all time great Transformers characters in Nightbeat.

There’s two other things to mention before moving on to the rest of the comic. The first is that this will be the last time any play will be made of the Headmasters gimmick, indeed it may actually be the last time any head-Nebulons other than Lord Zarak (who will be treated as a guy walking around in a big Scorponok costume in future) will be mentioned. Certainly as far as American readers are concerned there’s nothing to say Nightbeat has a little partner (meaning they don’t have to worry about exactly when he underwent the process as well as a bonus). Amusingly considering he wasn’t under direct obligation to promote it after Worlds Apart! Furman has actually used the idea more than Budiansky has.

The second is a detail that got a little lost amidst the conceit last week, that the first part was the first time since the very first issue that every single character in a strip has been entirely new (Worlds Apart! Part 1 just squeaked through with Cyclonus and Scourge at the end). For such a toy orientated book that’s mildly surprising, and it says a lot about the strength of the new characters here (especially Nightbeat) that this is something I never noticed until it was pointed out to me via the TFArchive guide to the comic.

Combat Colin is the future of the book.
Unsurprisingly Transformation is still keen to push the fact there’s two new stories next week, not to mention a competition. More surprisingly, but also pleasingly, there being two Combat Colin stories this week and the promise of more activity pages in future.

Of those two stories, the first is about Young Combat Colin and is in the old half page format. It’s a simple but fun gag about him building a “Hawker Hurricane Mk. 1” fighter plane at school whilst everyone else is doing model houses and dogs. The full page is given over to Secrets of Combat Colin, telling us various facts about things like the Atomic Underpants and giving the first him that Colin has special trousers. He’s also able to pay for all his gadgets thanks to big wads of cash from Marvel comics. I wonder if the editor handing over the money is the ever mysterious Euan Peters?

Action Force continues to show off Hama’s love of biplanes with very little else happening, ending with the plot not actually having started yet before it takes a two week break. Though thanks to reader Tim Roll-Pickering for pointing out in the comments to 230 that this is actually from further along in the G.I. Joe chronology than the reprints we’ve had recently, suggesting a token attempt at current (to the UK) toy promotion for the jets on display.

On the letters page even a generally positive letter from Michael O’Mahoney of Bassingstoke can’t help but put the boot into the black and white format. Though they do at least suggest an Autobot based counterpart to Aspects of Evil, though Dreadwind mocks the idea of Aspects of Good we will be seeing this. 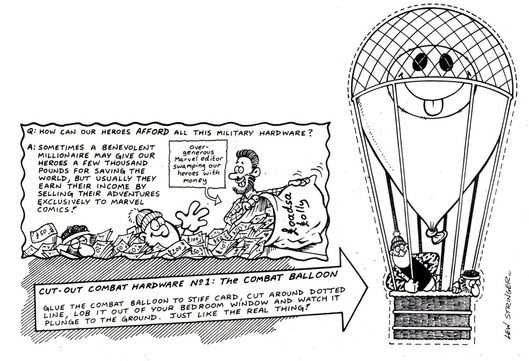 Euan Peters?
And in a small example of Dreadwind Fails to Answer Questions Properly!, Dreadwind fails to answer a question from Nick Scott of Pulborough about when Scourge will be coming back by not going “He was killed in Time Wars but “Can’t say—but I’m sure he will be back”. And I doubt he had Rhythms of Darkness! in mind.

Next week, there’s a tiny problem for Thunderwing 14 months ago… And a vital milestone in this project as we reach the 100 issues left to go mark. 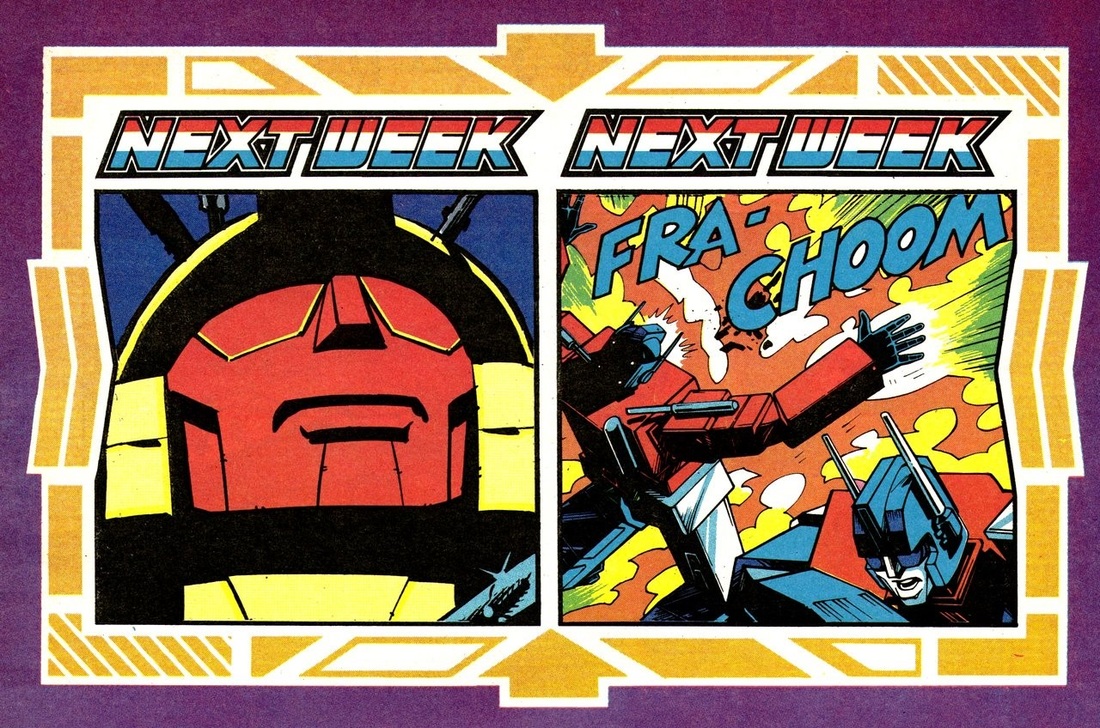 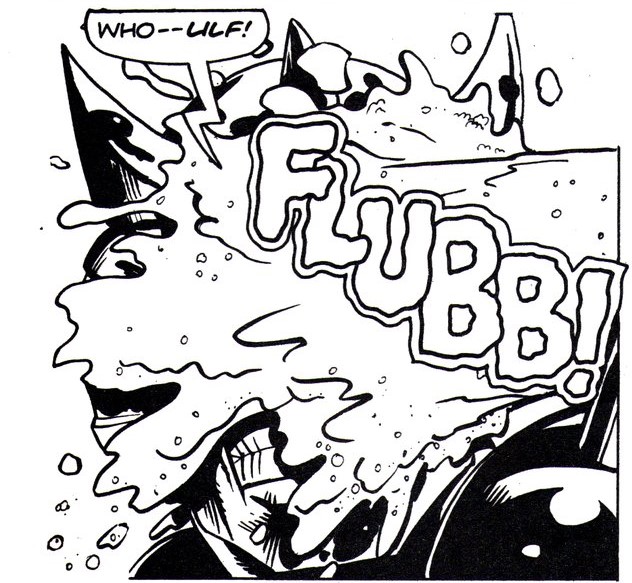