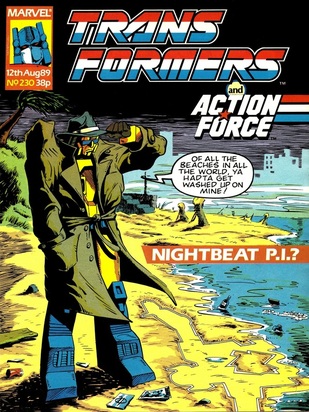 If the rules won’t bend enough to get you results...you have to break them!


There was a storm in the city, and the rain was splattering on my window like a Nel Yomtov colour pallet. I lit a cigarette, poured myself a stiff bourbon and pulled my latest case towards me. An old funny book from the limeys that needed reading through for clues. Seems a lot for a mere $25 a day plus expenses, but sometimes through these mean pages a man must flick.

For kids at the time of course the real crime was the reprinting of old stories, and they’d have happily spent a spell in sing sing to stop them. Perhaps I’ve been knocked out in one dark ally too many, but even though I read the book at the time I don’t remember anything of Resurrection! after the first part.

The real case though was in the back half the paper. The Brits had been forced to make some of the pages black and white, and finally they’d hit on a strip that actually needed to be in monochrome. Of course, that means it became one of the few that got reprinted in colour, but them’s the breaks. 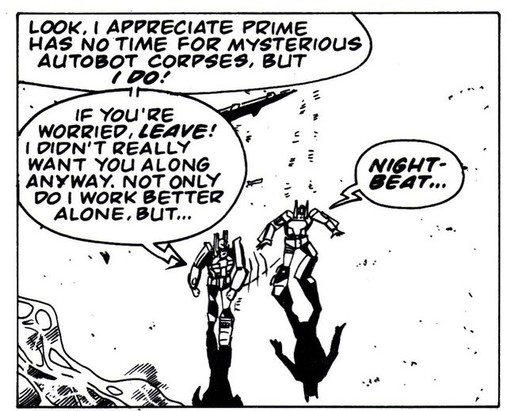 Looking for the lady in the lake.
The writer was a guy called Furman, he was no Hemingway but that was a plus in my book. The guy was a big fan of genre homages, stuff that would probably go over the head of the kids but which would make their old man smile if he was reading it over their shoulder. Smart move, it gave a lot of reread value to those little rascals when they came back to it in long pants.

The Big Shutdown! is a case in point. Back when it was only candy cigarettes I was smoking even I knew who Bogart was and could get that this was generally a homage to his films. I’d certainly seen enough of them even at that age, they were as common as a Dan Reed wobbly line. The Next Generation episode The Big Goodbye being a fine case in point.

But this shows a deeper love for that Chandler bum than just the usual tropes of raincoats, hats booze and characters probably played by Peter Lore. Any third rate hack can knock out something based on watching The Big Sleep film, but how many open as this one does with a lengthy misquote from the book’s closing “Did it matter where you lay once you were dead?” monologue? It was class, pure class. And because it’s based on an author with some real skill it reads real well even if you don’t know the source. The whole thing grabs you like a Michael Bay explosion. Throw in some title drops for Playback (as the murder victim, take a stiff drink before reading his TFWiki entry that tries to claim some random bot from the cartoon three years earlier is also him) and The Long Goodbye and it’s clear Furman knows his Philip Marlowe, and in this business knowing your Philip Marlowe can be the difference between creating Death’s Head or being stuck with Death’s Head II.

Here's looking at you kid.
A good Marlowe homage would be nothing without its Marlowe, and with Nightbeat Furman nails Bogart as hard as Geoff Senior nails a square jaw. Acerbic, dedicated to justice no matter what and more cynical than a guy still waiting for his check from Dreamwave. Grimlock is the guy often held up as Furman’s signature character, but Nightbeat is his real crowning achievement.

Of course, a real dick works alone and Furman is forced to introduce all three junior Headmasters here, something he works away by making Hosehead a red herring and Siren a nuisance of a partner he gets shot of as quickly as possible. The gag of Siren being VERY LOUD as he chases the two mysterious cars from Playback’s corpse may be playing to the cheap seats, but it’s a good gag for those too young to appreciate puns based around knowing the title of the least well regarded Chandler book.

For all Nightbeat stays with the corpse and pretends to investigate, this isn’t really a murder mystery though. Chandler is all about mood and atmosphere and analogies more tortuous than the back-story in Two Megatrons. How the corpse on the rug got there doesn’t matter in the least, famously anyone adapting The Big Sleep has to make their best guess as to who killed the chauffeur because even Chandler had no idea. What matters here is the windswept beech at night, the dark humour and the hero who is a knight in tarnished armour, not who actually killed Playback. 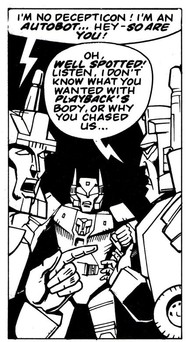 I'm looking forward to the adventures of Horsepower.
Indeed, the case is solved miles away from Nightbeat. Siren chases a fire engine and a car that turn out to be Transformers, indeed Autobots who think Siren in a Decepticon working with a cheap gangster chasing them. Learning they’re on the same team doesn’t help Horsepower (a name with no obvious Marlowe joke I can spot) who gets blasted into pieces smaller than Megan Fox’s shorts. But that leaves Siren and Horsepower to face the self confessed killer and heir apparent to the Decepticon throne: Thunderwing! It’s an old fashioned serial, come back for the matinee next week to find out what happens next.

The talent on display here would make Hollywood’s best proud, smart and funny and works on multiple levels. There’s only two tropes of Chandler that aren’t present:

The first is at no point does Nightbeat get knocked out (most of the Marlowe books involve him getting repeatedly koshed by each suspect), something his first American story will rectify.

The second is there ain’t no broad, some dangerous dame with legs as long as a James Roberts script descriptive passage. Again, the time for this will come.

On art Lee Sullivan knows the game and as you’d expect from someone who plays the sax clearly love the whole era and gets the tone right on the dime. Gotta give credit to Andrew Wildman for putting Nightbeat in a raincoat and fedora on the cover as well.

So stop moaning!
I pour myself another drink, get up and go look at the chess set. I don’t play against people but I do like to work out puzzles, and the comic is dealing with moving the pieces into place for its own future as well. Transformation reveals on the sidebar (under the title Moans and Micros) that the kids who’ve been unhappy putting out money for old rope will be getting all new content cover to cover in two weeks.

It might be too late though. Dread Tidings cheerfully prints another letter from a malcontent in an almost cheerfully suicidal way of making every reader feel ripped off even if they weren’t already. Martin and Richard Cook are madder than a hate plague infected Rodimus Prime at the “Colour it in yourself” comments from issue 223 and point out the price rise means readers are getting less value for money. All Dreadwind can offer in return is “Nuff said?”.

Alex Wardle of Norfolk also writes in claiming his typewriter is a Decepticon. What sort of person decides on a conceit on what they’re writing and overdoes it like an Alternator’s transformation scheme?

Combat Colin survives the brain drain thanks to already being stupid, and uses the Combat Yodel to collapse the cave and trap The Brain before telling readers to buy comics instead of watching the tube. The ending feels a little rushed, but this has been one of the all time great Colin stories.

In the same way Farewell My Lovely became Murder, My Sweet for the film, the Brits call G.I. Joe Action Force, guess they can’t handle a real American hero. The new story is Airshow from the Special Missions book, and it’s a fairly dull show off for Hama’s interest in old airplanes. It’s more interesting for the claim that the story will continue in two weeks, which won’t be the case this time.

I go back to the window and put the comic on top of the box of Speciality Magazines from the back of the bookstore. As I finish the last drag of my smoke I wonder, does it really matter where the old funny books go when they’re done? Kept carefully in plastic wallets or face down in a recycling bag, it’s all the same when they face the Big Cleanout. 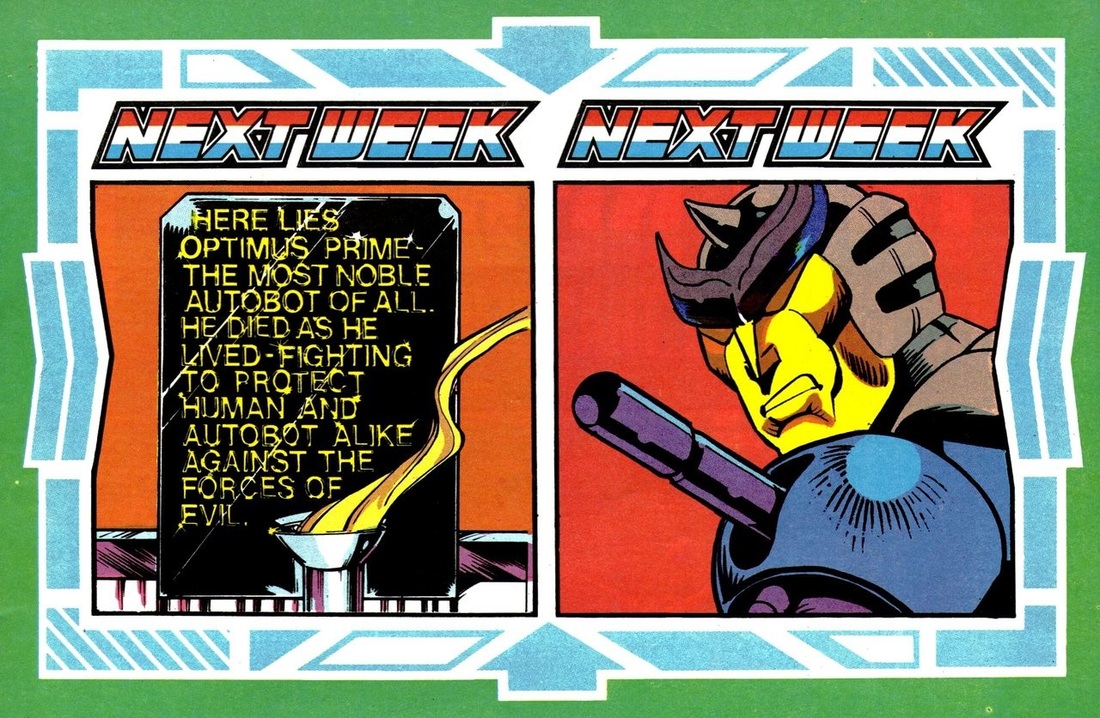