Ask if I am Mouse or Man, The Mirror Squeaked, Away I Ran. 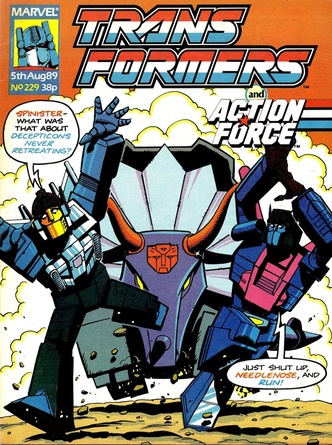 
I just bagged myself Optimus Prime!


After eight solid issues of Death’s Head and his selected highlights, the newest reprint actively avoids the next step in that chain, and instead hits upon a fairly sensible idea that suggests that the situation has settled down enough behind the scenes for some thought to be put into these things.

So, the just released Collected Comics 13 has reached issue 100, here things pick up on the next part of the Prime storyline from issue 103, showing his leading of the renewed resistance on Cybertron. This nicely deals with the problem the volcano storyline had that the typical UK epic that people would most likely want to see again doesn’t easily fill the new gap between American issues. “Here’s the climax to a reprint from elsewhere” is a smart move on that score, unless you’re someone who only follows the specials. And unbeknownst to the editorial team it does start the path towards the previously logical progression of the stories picked for that format going a little odd (there will be other problems later on with lost art, but even before that the next Collected Comics will be an eccentric choice).

Despite the very specific reasons for it being chosen, Resurrection! does continue the trend of the reprint feeling of a piece with the new material around it. On the one hand we open with narration boxes that are at odds with the on-page action (Octane describing his brave battle Vs running away and knocking himself out), just as with Chainclaw and the tactical manual quotes last week. Plus his panicked retreat nicely echoes the experience of Needlenose in the second half of this issue.

Considering Furman loves his tropes and—as we’ve discussed before—is very much a writer in the Terry Nation tradition perhaps this unintended symmetry was going to be inevitable, but it’s surprising the extent to which it has applied to every reprint so far.

The other thing to note is that as a two parter, Resurrection! would be scheduled to run for four weeks in the new format. This along with other things is Suggestive as we’ll discuss. 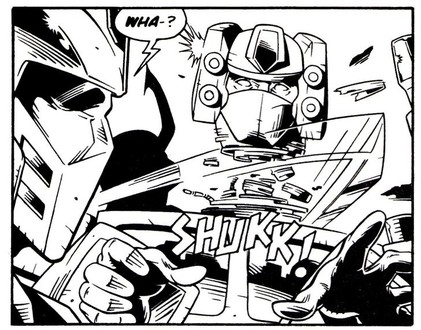 The birth of Titan Master Prime!
The Hunting Party itself is, as with the Decepticon training range back in Legacy of Unicron! (though I failed to spot it also has a connection to the fun-house in The Man With the Golden Gun back when I covered that), indebted to the fake village training ground from The New Avengers episode Target, in this case more overtly, even down to the graffiti. Though “Decepticons Beware!” is a bit more sinister than “I love Purdey”.

The main purpose here is to introduce the new Mayhem Attack Squad in a way that mirrors the introduction to the Wreckers all the way back in Target: 2006, only with the training exercise turned up to 11. So in a region of Cybertron where the Autobots hold sway and even Optimus Prime will throttle you with his bare hands, our mottle crew of Bludgeon, Octopunch, Stranglehold and cover stars (in another excellent Geoff Senior piece) Needlenose and Spinister have to fight off and kill demented psychopathic known Autobots.

It’s likely readers with long memories, or who had see rental videos of The Next Generation (it’s even more of a holodeck than when Uncle Bob did it in The Flames of Boltax!, interestingly with “Solid light” Furman comes close to coining the “Hard light hologram” term four years before Red Dwarf did so as well) would quickly twig what was going on. I do remember at the time though finding the set up interesting and—not having read the stories establishing the exact situation on Cybertron (and coming right after a reprint showing Optimus at his most militant)—had no reason to doubt there wasn’t such a place on Cybertron even if the decapitation of Prime alone means there would have to be a twist coming. 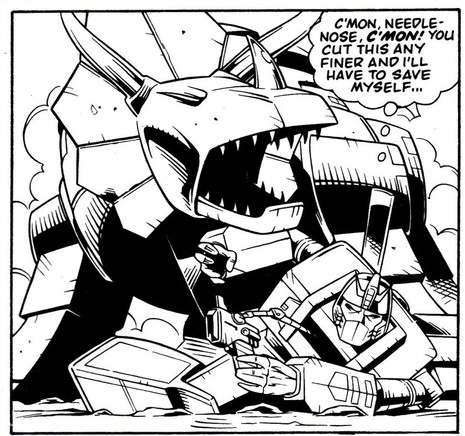 He has no luck with Dinobots.
What’s interesting though is seeing how the Decepticons view (or at least present when training their troops) the Autobots: Ruthless deadly killers you have to do unto before they do unto you. The exercise clearly isn’t just to test people’s qualifications, it’s to maintain and reinforce a state of mind. As with several recent aspects of the black and white stories it feels like some serious thought has been put into the realities of military politics, and it all has the feeling of Soviet propaganda. Which is appropriate of course as the “Fake training village” is usually attributed to them as an idea. Though the usual use of the concept in fiction is of a place to train sleeper agents (as in the most famous example of the Danger Man episode that inspired The Prisoner) rather than for military training as here and in Target.

The heart of the story though is the connection between Needlenose and Spinister. Whilst the three Pretenders are having a great time impaling Ratchet and poking Fortress Maximus in the eye, Needlenose is completely terrified by the idea of amoral Autobots and runs away in panic.

Spinister’s thoughts on the whole issue are presented as more enigmatic, but he cares enough about Needlenose (and camaraderie between Decepticons is always welcome) and considers him to have enough potential to go after him and try to help the guy out of a situation that could get him executed for cowardice.

This involves pretending to be overrun by Slag and calling for help (though he has a gun to hand if Needlenose doesn’t come back the general implication is even as a simulation this is for keeps), leaving Needlenose conflicted between his cowardice and assumption Spinister will want to kill him for running and wanting to help a friend. He decides it’s better to die on his feet (of course) and takes out Slag with an impressive panel of ripping out his guts with a massive pole-swipe. 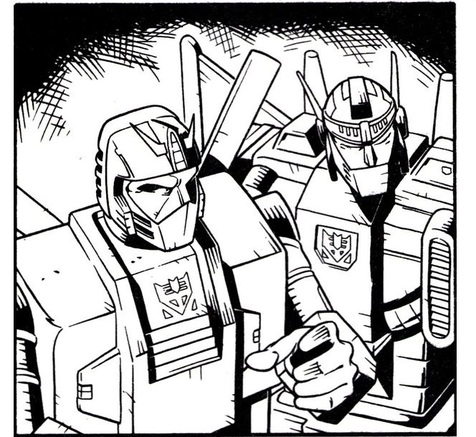 No need for words.
Before any serious discussion of what happened can be had, the holodeck turns off and Snarler appears to announce High Command has approved them going to twat Catilla and Carnivac. In an example of early instalment weirdness Spinister rather than Bludgeon is the senior guy (any time after this and that would be unthinkable, though Bludgeon is closer to his final portrayal than his Aspects of Evil! showing) and has to pass everyone on the test. He clearly feels conflicted over Needlenose... but ultimately gives everyone the OK. But will he regret it?

This is the best black and white story to date, continuing the upward trend started last week and really starting this final era of the UK originated material properly. It manages to properly establish the Double-Targetmasters as real rounded characters you care about, provides key set up for the Survivors follow up arcs and gets to relish in some gratuitous violence as the Pretenders have the time of their lives. All in a short five pages.

On art, Simon Coleby has huge fun getting to cut loose with the violence, but he also nails the character aspects of the story. In particular the penultimate panel of Spinister weighing up the ashamed Needlenose tells you everything you need to know without a word being spoken. Whether it’s a scripted detail or something he threw in himself, Coleby also gets to be the first artist to draw what will be a recurring joke of terrible things being done to Getaway (albeit not the real one this time) as well. Though as with a smart and dangerous Spinister this takes on a whole new feeling after the more recent comics.

You’ll remember how last week I mentioned Transformation talking about the Micromaster stories coming in issue 233. What I’d forgotten is they will actually happen in issue 232, presumably they got hold of the much needed new American material slightly sooner than expected and thought it would be a good idea to run it immediately so as to deal with both reader complaints about the reprints and the fact they’ve been negligent in promoting the new small toys.

The feminists will be disappointed in three weeks.
That decision obviously hadn’t been made at this point though as the sidebar this week describes the next two issues (focusing more on the début of “One of the most powerful and evil Decepticons ever seen” than the new Headmasters) before claiming a story “For all you feminists out there” (sigh) will be between The Big Shutdown! and the Micromasters. Obviously this sequence will be shifted to accommodate the new US launch, and is the first out and out confirmation of a black and white story going out in a different order to the intended one. Though here it will make very little difference and wouldn’t have been suspected if not for this. Some of the possible ones in future will have a bit more of an impact.

“Ah” I hear you say, “If they’re unexpectedly re-joining the American story in three weeks and Resurrection! should run for four weeks, how will they handle the difference?”. Stay tuned...

The Classics Cover Calendar for August (Dan Reed’s Bruticus/Defensor catching a train piece from issue 142) means no Dreadwind, but Combat Colin makes up for it as we meet the fiendish Brain properly. He devilish plot is to make the population incredibly stupid with awful television—of which Jimmy Tarbuck is a key part—so they’ll barely notice fez wearing rock men taking over the world. Colin and Steve are then (in a scene reminiscent of Arthur and Ford being subjected to Vogon poetry) strapped in for a concentrated brain destroying blast of 1980’s British TV!

The joy here is in the details, from the rock man waving a “Hello Mum” sign to The Brain’s Watchman style badge having a different design on it in every panel in which it’s visible (here including Batman and the inevitable Number Six).

Over in Action Force the current story concludes with Chuckles and company failing to stop the missile taking off and it having to be destroyed by the warned-by-Buzzer Cobra instead. As the Dreadnoks involvement was nothing to do with our heroes that means the good guys were actually more of a hindrance to defeating the plot to destroy Cobra Island (though it’s not really clear what their objection was considering the Forcies have previously been frustrated by the red tape protecting the island and don’t usually object to breaking rules) than a help. Oddly they all get made real members of Action Force by Hawk anyway, and Chuckles forces the Pentagon officials behind the whole thing to resign for trying to remove an island literally only populated by bastards. The bastards.

Next week... well I’ve been listening to the recent Toby Stephens staring BBC radio Chandler adaptations in preparation and have the Elliot Gould version of The Long Goodbye to watch as well. Hopefully reading the result won’t put you into a Big Sleep... 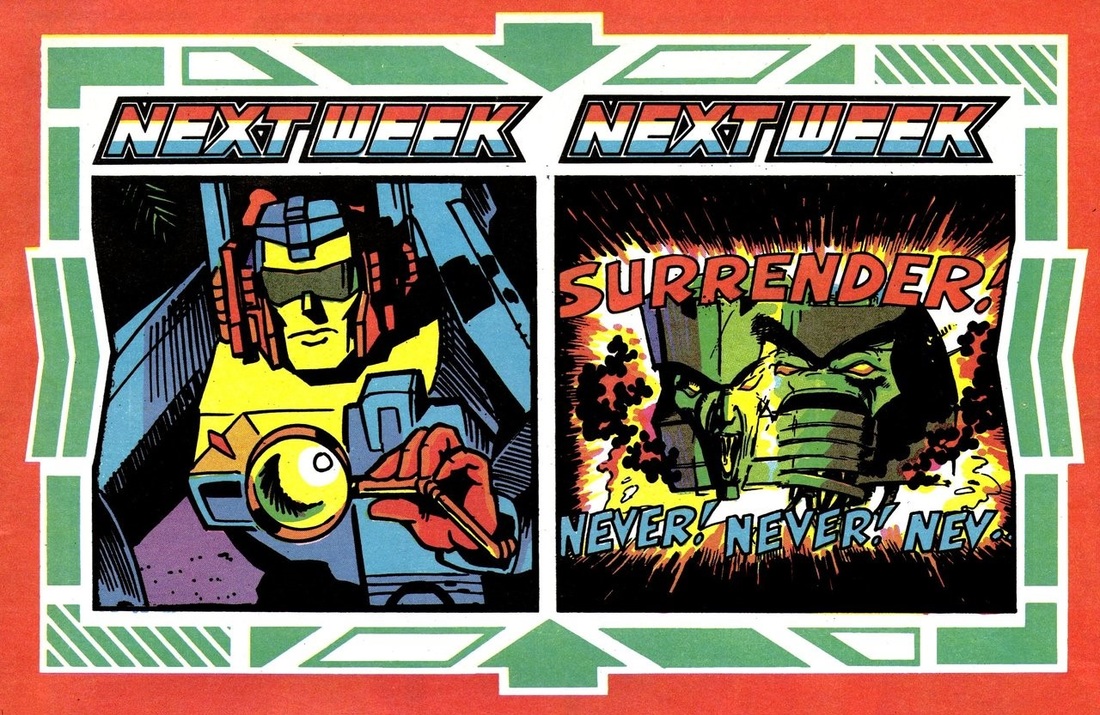