He Can't Read My Poker Face. 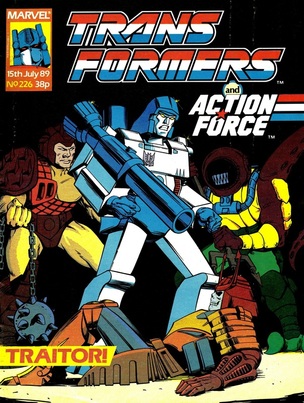 
“Nothing can resist the charge of Stanglehold!”
“Perhaps not...but anything can evade it!”


If the choice of reprint last week created an unfortunate juxtaposition, here the brand new second part of Headhunt actually makes for a nice counterpart to the British story. Both involve a desperate cat and mouse game between hunter and hunted in a fight to the death.

We’re familiar of course with Rodimus being pursued by Death’s Head through the trenches, though the first time I read this issue it was the ripped off head used as a faux grenade distraction that really grabbed my imagination. Which explains a lot. Pleasingly, despite the messing around with the formatting to suit it being broken into smaller chunks we still get the classic subversion of the NEXT box being replaced by question marks as in the original printing.

As far as the black and white story’s take on The Most Dangerous Game goes there’s an interesting twist on what is a very tired trope, as it’s a fight where a villain is the victim of the chase rather than a hero. This is not the only area this supposedly Megatron focused story plays with expectations as it uses the need to provide a toy advert to its own advantage. There are three new toys to promote and four new characters in the issue. For children at the time who didn’t keep completely up to date with toy catalogues it would have been unclear that one of these was specifically created for this issue just to die.

The Actual New Characters include a key one who will become a firm Furman Favourite: The Decepticon Pretender Bludgeon. This feels as if it was written after Furman's first American issue to feature him, in Yesterday’s Heroes! my memory is the Skeletor cosplayer is little more than a cool looking thug. Here he gets to be closer to his actual final character, though by no means as calm and centred as he will be, though you can always put that down to Rodimus being an unreliable narrator. 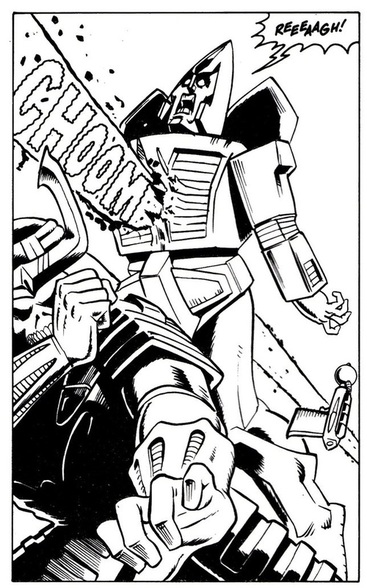 The subject though, is suppose to be Megatron. Returning to the very near future in 1990 (though this is another instance of Rodimus remembering his slightly different time-line as there’s no moment this could happen in “Our” version of that year. Though Furman was presumably still vaguely thinking either this was the direction he was heading in on the American book or it would be cancelled before then), ol’bucket head has a serious problem to deal with thanks to Hot Rod. Who is mainly showing a real talent for screwing things up in this storyline.

The opening is a fine example of Furman using the first person narration format to skip straight to the action: Old Rodimus explains he, Kup and Blurr were capture on Cybertron (the continuity of artist in Lee Sullivan means Megatron is working from the base he took in Fall and Rise...), but were freed by a Decepticon double agent. As things begin, Hot Rod has been recaptured and Megatron has set a cunning trap. Claiming Bludgeon is the traitor, he gives the Decepticon the chance to die honourably via trial by combat (a small thing, but this love of honour and old ritual will be a key component of Bludgeon’s character) and sets Stranglehold, Octopunch and Warmonger on him.

Effectively the rest of the issue is a chance for Lee Sullivan to show off, and he does it very well. From a fantastic kinetic panel of Megatron throwing Bludgeon at his Pretender shell as the hunt starts there’s fantastic image after fantastic image, all of part of a well thought out sequence that even uses the aforementioned Pretender gimmick for once. My favourite being Octopunch jumping out of his shell after his shoulder is damaged to deliver a blow to Bludgeon’s jaw. Though Stranglehold jumping out of his shell and changing to rhino mode in the same panel is nearly as wonderful. 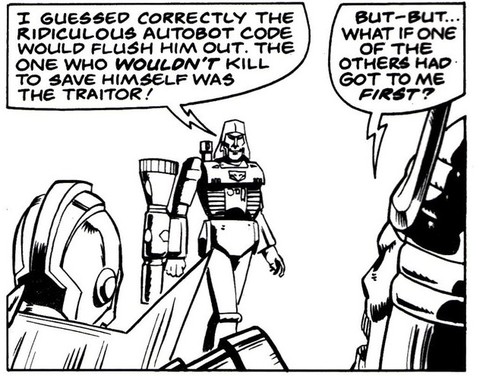 Megatron sure has great legs.
If I were a betting man, I would place money on this being written either at the same time or slightly before the American story Primal Scream!, Bludgeon gets Stranglehold to run head-first into a wall with what feels like a first draft of what will be a slightly more refined joke in that story.

The net result is Bludgeon takes care of two thirds of those attacking him, but Warmonger manages to get the drop on him and place a gun to the back of his head. But in a more obvious reveal if you know the toys, he is the Autobot double agent and cannot kill in cold blood. So Megatron blasts the hell out of him.

As with Shockwave’s actions last week, this should feel slightly more juvenile than usual for the book. It’s hard to imagine that an undercover Autobot wouldn’t have to get their hands dirty to keep their position, indeed that’s the entire basis of the character of Counterpunch. If they were going to be completely limited by the Autobot Code it’s unlikely they would last very long in the role.
Luckily though, it’s easy to be distracted from this by the punchline that really shows what a bastard Megatron is. He’d worked out the double agent had to be one of these four, and had just picked on Bludgeon so as to force the hunt and let him see which one wouldn’t kill. When Bludgeon asks what would have happened if one of the other had gotten to him first, Megatron is only concerned that he’d have had to think of another plan and perhaps he should have just saved time and killed all of them...

This is by far the best issue of this storyline to date, it comes in and tells a fast dynamic action story with great visuals and some nice bits of characterisation (even if Bludgeon is still a work in progress, amusingly the next time we see him he’ll be the hunter) from which everyone comes out well. Hot Rod himself is basically redundant, just there so the narrator can witness these events, the story doesn’t even bother to explain what happened to him afterwards. Megatron himself is also more of a sideshow despite the good ending focusing on him. But with the plot around them so well done it doesn’t matter, and it’s hardly surprising that the Student actually looks interested this time when we return to the framing device at the end. 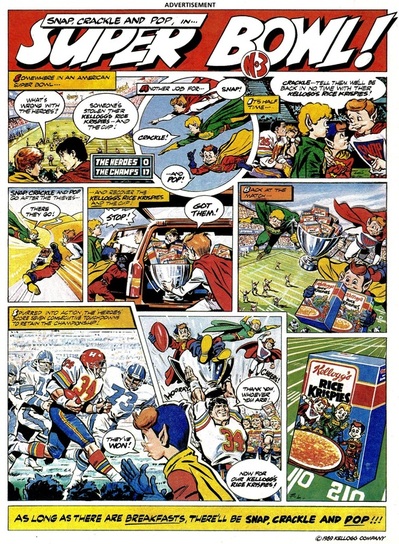 Thank goodness the Super Bowl is saved!
As mentioned, Lee Sullivan’s art is on top form, with him clearly having a great time on the monstrous Pretender shells. Interestingly his original design for Warmonger looks suspiciously like the Gobot Fitor, which if nothing else adds to the entertainment of seeing him blown apart.


Transformation is oddly written this week, starting with a Jaws 2 gag (“And when you thought it was safe to turn the pages of your comic...”) before randomly turning into a three course meal analogy that doesn’t really follow on from this very well. It’s also notable for promising an AtoZ on Prowl and Ramhorn on page 17 which doesn’t actually appear. The sidebar is very keen to try and create a sense of mystery over what the final Aspects will be about and to make a fuss of forthcoming Doubledealer and Mayhem Attack Squad stories.


Dread Tidings has yet another letter against the new format, this time from the “Still disgusted” Brian Stuart of Dublin. Meanwhile Ross Lucas of the Isle of White brings back the old favourite about whether the cartoon or the comic is telling the real story (and Dreadwind gives the old “Us” reply) and gives us a fine Dreadwind Fails to Answer Questions Properly! with his question about where Galvatron is that suggests Dreadwind is a couple of weeks behind on the comic and doesn’t know he’s back.


The first proper full page Combat Colin sees Lew Stringer venting at tabloid journalism as Headline Howard of the Wednesday Wart tries to prove Colin is a menace to society (“I’ve written the headline, now to make up...err...”investigate” the story to fit it!”), only to discover he’s more a menace to nosy journalists after crashing into the back of the Combat Tank at a Pelican crossing.


Action Force sees Hawk’s kidnapping explained by undercover agent Chuckles (Hama wisely gets in with the Miami Vice lookalike gag before the reader can), it seems all these new toys were told they were being recruited to AF and ordered to guard a Great Big Missile, but in fact the entire thing is part of a scam by sinister Pentagon officials. The main joy here is Chuckles’ being so casual in explaining things to Hawk as if he’s talking about the latest baseball game.


Or perhaps American football as this issue seems to coincide with one of the periodic attempts to make British children care about that sport as an advert for Rice Krispies about Snap, Crackle and Pop saving the Super Bowl is otherwise a bit odd.


Next week, who can the final Aspects of Evil! be based around? And will the student get a name? 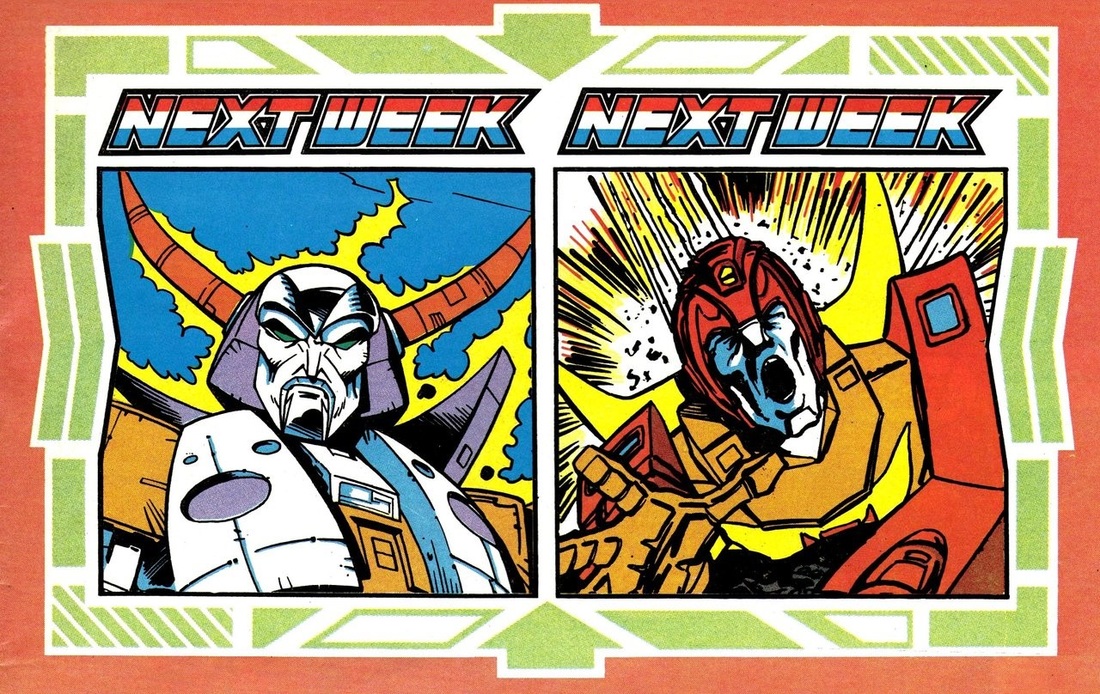