Bless Your Soul, You Really Think You're In Control. 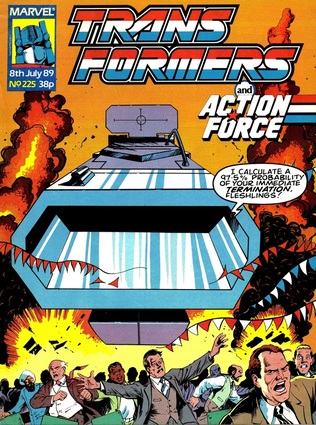 
If you like comics where Rodimus Prime is tired and weary and feeling the weight of leadership then this really is the issue for you.

The fumbling of the handling of the first set of reprints is something we talked about last issue, but it is worth emphasising just how odd this must have been for readers at the time, especially new younger readers who didn’t already know how things between Death’s Head going to 1987 and him coming back played out. Luckily Blot is there to cover an extremely lengthy storyline in two panels of exposition.

Headhunt is also an unfortunate choice of story to reprint alongside the third part of Aspects of Evil! for two reasons. The first is the aforementioned way both make it look as if Rodimus is a pretty terrible depressed and a long way past his best leader. If this was your first exposure to the character you’d be wondering if he ever did anything but seem self absorbed and sad.

The second is Headhunt shows us a Shockwave who, despite being logical, can use that logic to predict the behaviour of extremely emotional beings and thus plays Cyclonus and Scourge and their anger like a finely tuned piano to set them off against Death’s Head. The newly created cliffhanger is even of Shockwave having a good old laugh. What follows in the black and white section of the comic was always going to feel off, but coming off the heels of this it can only seem more out of character for him. 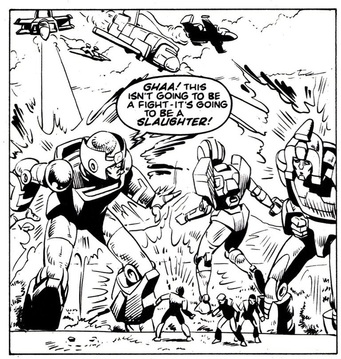 "We should get better defences at some point"
Aspects of Evil 3! continues the trend of showing what was on Furman’s mind as he toyed with the American book, though in a less direct way that the last two weeks. As he begins to plan to bring Unicron and the Primus back-story across the Atlantic the Movie is clearly in his thoughts (and several American stories such as Rhythms of Darkness! will play with its iconography) and this week’s black and white effort is very much inspired by what is arguably the best part of that film: The attack on Autobot City. Which Furman clearly likes having already done one sequence heavily influenced by it back in Space Pirates!

So, a group of Decepticons lead a surprise attack on Autobot City that comes very close to succeeding thanks to a mistake from Hot Rod, with the Autobots seen all being those based there during the movie except for Optimus (in a chance to see him back in his original body).

The interesting thing here is the chance to see a future story—set in 2004 during the city’s opening—with no connection whatsoever to the ongoing Galvatron or time travel plots. If the comic had ever gone down the route of the TV show and permanently relocated to the 21st century this is the sort of thing we’d have had a lot more of. It also adds nicely to our future knowledge and follows on well from Ark Duty!, the description of all the world’s dignity’s coming to the opening of the city they approved all makes for extra world building.

Also, after being critical of his prior black and white art, Andrew Wildman is really on form here, lots of detail and he’s clearly having a ball doing a big—if short—battle involving lots of characters. He does an especially good chunky Ultra Magnus as well. 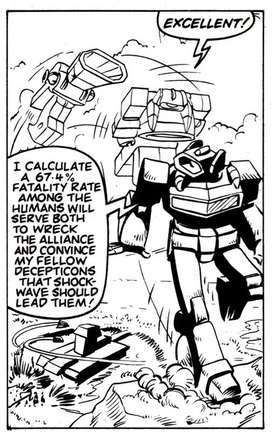 "I can predict the human's emotional response well enough it seems..."
Unfortunately what doesn’t work is quite a big stumbling block to enjoying the story: The Shockwave/Hot Rod plot itself. The idea Hot Rod would be stupid enough not to turn the City’s defences on before the start of the party is actually in character for him, even if it strains credulity such a thing would ever be turned off in the first place (so much for the need to slip past early warning systems in the film, just attack on early closing day), and Shockwave attempting one last coup against Megatron by showing a group of troops he can take the city through his logic is also perfectly in keeping with his established persona.

I can even ignore the Autobots just standing around and letting the Decepticons shoot them rather than going to turn on Metroplex’s defences like in the film if it led anywhere interesting (and we do get a great panel of Prime taking a blast in the back from Shockwave with barely a grunt whilst giving orders). Though it might have been nice if simply taking the humans inside during the battle rather than the Autobots acting as shields had been mentioned.

The problem is Shockwave’s reaction to Hot Rod disobeying orders out of guilt and taking the fight to the Decepticon leader in advance of the schedule he’d logically worked out. Prior to this Shockwave had shown no surprise at the City’s Advance Attack Warning System being off and was acting as if everything was going exactly to plan. So even ignoring his portrayal in prior issues—including the one reprinted at the start of this one—within just this story Shockwave can accurately predict the behaviour of emotional beings as it seems he’d factored in that Hot Rod would screw up (shades of the Quintesson plan hinging on Arcee being an idiot back in Space Pirates!). 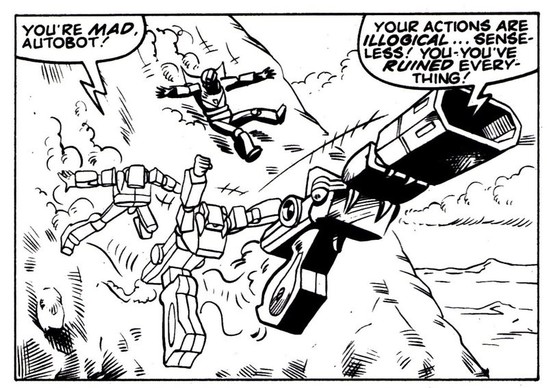 "There's no way logic could have predicted you're a dick"
But suddenly, and seemingly just to wrap things up within five pages, when confronted with the know to be a hot head Hot Rod acting like a hot head and trying to tackle him he acts with complete shock and is upset to the point of feeling like he’s going to cry. Considering Hot Rod only mildly wrestles him there’s no attempt at a fight back, no call for back-up from his troops. He’s literally all “This isn’t logical! I don’t know what’s going on! Decepticons retreat! Wah wah wah!”.

It’s the same mistake many writers make when dealing with “Emotionless” characters: The assumption they can’t understand emotions at all despite the fact there’s a perfectly logical reason for them (fear is a great survival tool) and it’s actually very easy to predict how people will behave emotionally. That’s how psychics work after all, you know enough about human behaviour and you know exactly how they’ll react if you say the right things without the help of dead spirits. It’s just very hard to credit this is from the same author who has previously—and will do so again—written a great Shockwave.

So STOP MOANIN'
As an attempt to show the horrible Evil of the character this is a total failure, instead it makes it look as if he’s incapable of functioning in normal society and it’s hardly a surprise he’s sheepishly quiet in the film itself. Other than a few nice moments (I love Magnus’ wry look of disapproval as Hot Rod is hailed as a hero at the end) it’s hard not to agree with the Student’s sarcastic and frustrated “Yes, yes, very fascinating” when we return to the framing device.

A mere three months after it was introduced, Transformation “comes clean” about the new format, though it doesn’t really as the blame is put on rising production costs with no mention of falling sales. Either way, this should have been done weeks ago and could have helped limit a lot of the damage that’s been caused. The tone continues to be belligerent and patronising though, dismissing complaints as “moanin’ and groanin’”, which almost certainly didn’t help, despite some effort put in to trying to get kids excited for Thunderwing and Deathbringer.

Unsurprisingly the letters page has more moanin’ and groanin’. This time from William Stephens of Newport. As counterbalance though we get an extremely positive letter from Stephen Rue of Hamilton, but with an odd writing style (“Yahoo! Wahey! Brilliant! Superb! Serrrrrrrmashing! What am I talking about? The new look comic of course!”) that suggests they might be taking the piss. As far as the future is concerned though it’s a response to Matthew Miller from Shrewsbury that gives one ray of hope as we’re told a character called Bludgeon will be appearing next week.

More excitingly we get our first proper full page Combat Colin! Though (as Lew Stringer confirmed to me on twitter), the news it was going to double in length came too late in the day to do a dedicated page for the first two weeks. Hence the activity spoof last issue and here we get two half page strips stapled together (“Wahoo! Here’s an extra bonus Combat Colin story! You lucky people! Is it your birthday or what?” Did Colin write that odd letter?). The first sees Colin successfully catching fish with just a saucepan and the second has him falling down the stairs when about to go on a date with the Giggly Sisters. Interestingly the shift in format means the fall and punchline (“Dignity at all times”) were used as one of the cut out badges last week before any reader would have gotten the callback. Though I totally failed to notice this. It also says a lot about the love there is for Colin now that Transformation has to apologise for him being in black and white now as well. 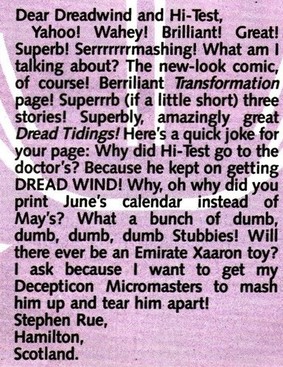 A totally sane reader.
The Micromaster competition is rerun once again, and a new Action Force story starts, Cross Purposes from G.I. Joe issue 60. It’s mainly about introducing a whole new load of Forcies (Chuckles, Law and Order and Falcon, who kidnap Hawk at an airport) and Dreadnoks (Zanzibar and Monkeywrench, who Zarana catches trying to steal petrol from Zartan’s hidey hole), but it’s the fact it was an early gig for future Spawn creator Todd McFarlane that is its main claim to fame. Though it doesn’t show many of his future flourishes.

Next week, a key new character is introduced and we get some proper evil thanks to Megatron. 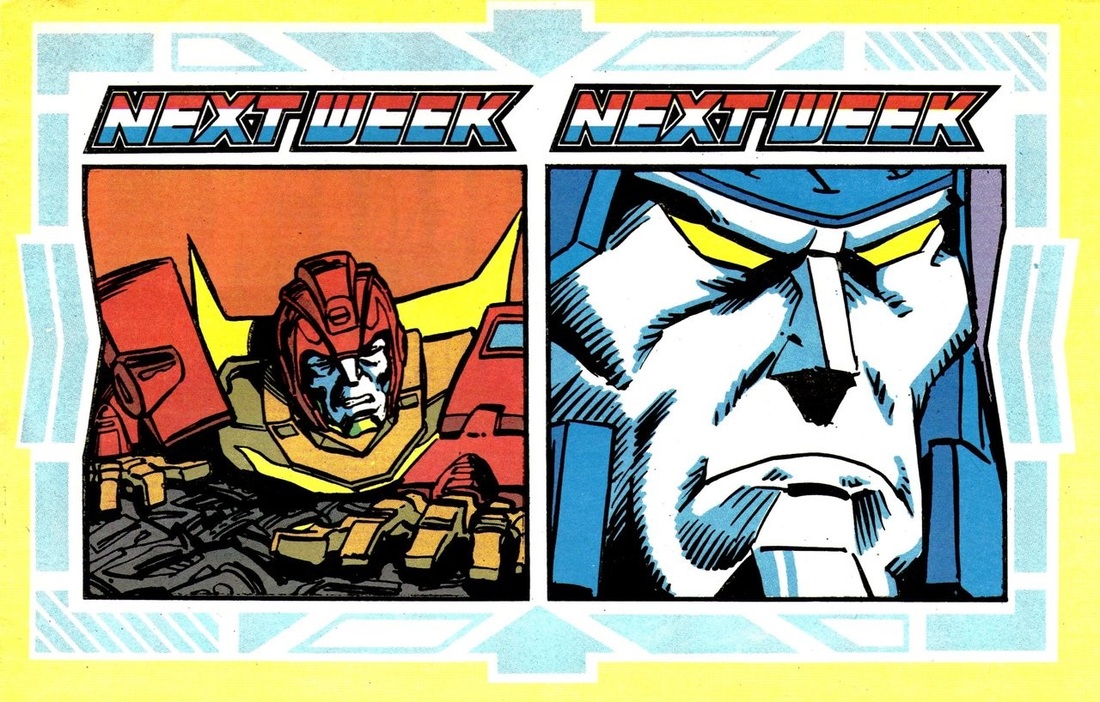