These Voices, I Hear Them and When They Talk I Follow. 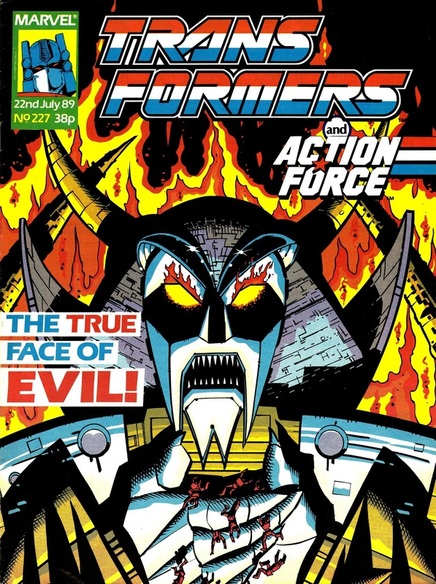 
Senile old fool! You’re memory’s playing tricks on you! I come here to find out about Unicron and I get a lecture on some evil has-beens and a work of fiction!


Since last week there’s been some exciting and unexpected news, the announcement of a Transformers partwork from Hachette, the website for which is HERE.

I’ve seen a lot of the same questions asked on various websites, and their own isn’t hugely helpful if you don’t know partworks, so before we jump into this week’s issue, some quick bullet points:

The intent is to republish just about everything to date across 60 issues, from Marvel to IDW and including previously unreprinted IDW stuff. For variety the books are being published in a random order, but on the shelf they’ll go chronologically (the spine image is from stock and probably a place-holder). Furman is editing and has promised this will be the first time the Marvel series has been reprinted that treats the UK and US as one book, basically it will be the 332 issue version (hopefully even with important changes to the American issues by the UK team included!). This will be the first 20 odd volumes (though as noted, not issues), you can buy individual books from the website as they come out if Marvel—or any other section—is all you want.

Partworks normally start with a trial run in one specific area of the country, if it’s a success it then relaunches nationwide back at issue 1 with whatever changes need making based on feedback. The Target: 2006 book is already out, but annoyingly none of the people I’ve seen share pictures online have said where they got it! Based on prior experience subscribers will either get the equivalent “Proper” issues at no extra charge, or their subscription will just be noted for the numbers and they won’t receive anything until it formally starts. Though at least one person has been told they won’t be charged for the first four (usually the length of a test) at all, which might show confidence it’s going to go nationwide. Though the website isn’t very well run (Andrew Wlidman).

The test means that if it does go nationwide it’s very likely to finish at least its initial run, with extensions possible if it does well enough. And if it doesn’t, Target: 2006 was back on at least some newsagents shelves towards the end of its 30th anniversary week. How cool is that?

Back in 1989, Headhunt continues with what remains one of my all time favourite sequences in the comic, the beard tugging argument between Cyclonus and Scourge. It still makes me laugh, and the faux cliffhanger is actually quite good, as Cyclonus rips apart a sewer to find Rodimus Prime. 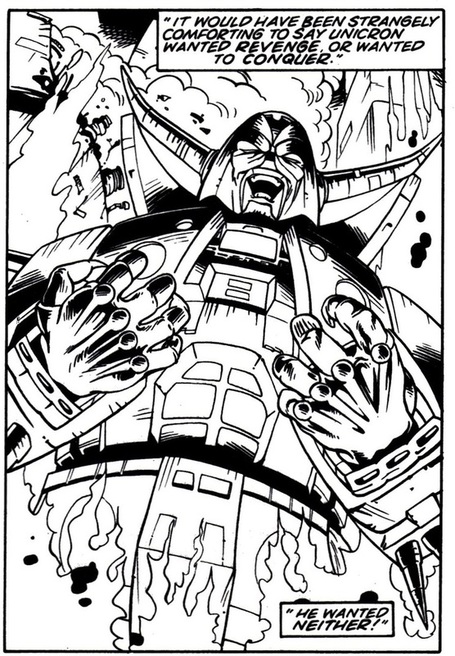 At least someone's enjoying it.
In the non-reprints, the wheels well and truly come off with the conclusion to Aspects of Evil! As a kid I actually enjoyed most of the earlier parts despite my thoughts as an adult, but even as a seven year old I knew something really didn’t work here. The problem of course is that Unicron is too big an idea to do in just five pages, the story is forced to reduce him to a non-speaking Godzilla, stomping around Cybertron with no set up for his arrival or real pay-off to his defeat. All it can be is underwhelming.

The most interesting thing therefore is how Furman is continuing to play with ideas he’ll be developing for the American book. Indeed, it’s easy to see him having a series of post-it notes on his desk with ideas for issues if he got that far and the entire script of this issue being developed from two lines for a possible US story.

So just as he will in a couple of years, Unicron attacks Cybertron having abandoned his servants and even turned on Galvatron (I’ve always assumed Galvatron’s body is dead here, but if you think this is the same as the Perchance to Dream! version he may have survived and gone back to the past again. Or come back from the past. Or...whatever), and when all seems lost the incumbent Prime takes on the Chaos Bringer alone by purging the tainted Matrix of evil and battling till Unicron is destroyed...before falling to Earth in a state that shocks his troops.

So far, so Reader’s Digest of Edge of Extinction!, but without the wider scope that story and its build-up have it’s a mess, a cluster of random scenes that don’t really make much sense. Especially the evil Matrix, I’d always assumed that—as per the next and final Future Story (and actually the end of this one, but more on that in a second)—it was possessed by Unicron...But if he’s out and about in a new body presumably that’s not the case so what has tainted it? There’s no clue or indication here.

There’s also no chance for the real joy of Edge...: The many and wonderful ways named Transformers are killed off. Outside of Rodimus, Kup, Arcee and Galvatron there aren’t any recognisable faces and there’s almost no chance for Unicron to show off, if this a Godzilla film it’s a very dull one.

The attempted meat then comes from Rodimus and what he goes through to defeat Unicron. Throughout the story his narration gives Unicron a personality and motivation that are impossible to detect from him walking about standing on things. For which the listening student correctly calls bullshit. 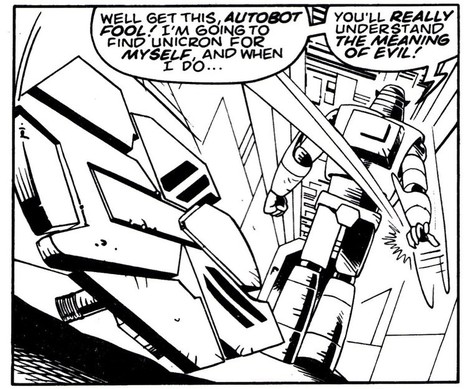 Mic drop.
The reason for his insight though is also the reason he’s terrified for Kup and Arcee to approach him at the end: Unicorn has been absorbed by the Matrix, tainted it and allowed him to influence and sometimes even control Rodimus. This isn’t very well conveyed, intentionally though as his inability to properly explain his insight into Unicron is actually the result of the influence of Unicron, making Rodimus seem ineffectual to the student and convincing him to go find Unicron himself and find out the true meaning of evil.

What Unicron actually hopes to gain from this is also unclear as the student won’t be able to find him, presumably it was just for shits and giggles and a means of testing his growing control over Rodimus. Either way, as a kid I had no idea what was actually going on here and I’m not sure if it only makes more sense as an adult because the follow-up story (though set earlier. As Furman clearly has plans for Unicron in both the US and UK it’s odd he so emphatically says this is Unicron’s second attack with notes pointing to the film and issue 151) explores the idea in a more successful way.

Before stomping off and throwing away his Autobrand, the student decides to go all meta with the quote I opened this piece with (complete with “You’re” rather than “Your”). This feels very much like Furman, looking back on the story to date, realising it hasn’t quite worked and has decided to lampshade the failings in the narrative and try and pass it off as clever and intentional. Yes, four out of five weeks have been underwhelming have just part of Unicron’s Evil Plot! Hmm.

The idea of Aspects of Evil! was fine and the format will be used with more success down the line, but the execution hasn’t quite lived up to the format outside of Megatron. Only Rodimus’ agonised scream as he realises Unicron is still within him has any impact here, despite newcomer Simon Colby doing a sold job on art. Overall this can be filed as a valiant failure.

The real oddity is, I'd definitely seen the Movie at this point because I knew who Unicron was, but this was effectively my second exposure to the character. Which probably explains my bafflement now I think of it... 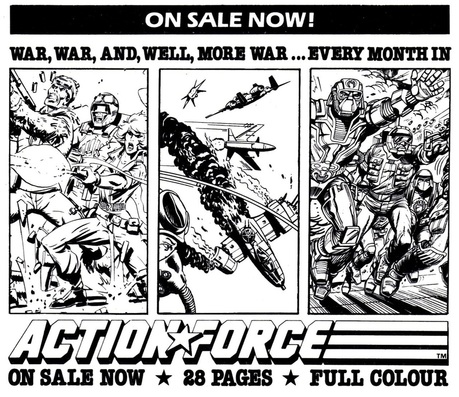 But what is it good for?
Transformation is still slightly out of sync with AtoZ, promising Rampage and Ratbat but instead including the misplaced Prowl and Ramhorn from last week. It also promotes the new Collected Comics 13 (oddly without any advert within) and tries to get readers excited for Action Force Monthly 15, which presumably was undergoing a push at this time as there’s also a half page black and white advert and it’s the focus of The Mighty Marvel Checklist.


In Action Force itself, the Dreadnoks attack the missile (a problem with the split up format is I’d forgotten Zanzibar had promised them useful information two weeks ago and was confused by this) whilst the naughty Pentagon people prepare to launch it. To be honest I’ve rather lost track of this one and am missing the much more fun Raptor.


In Combat Colin, Warden Quick from down the nick calls to warn Colin that Professor Madprof has escaped from prison in a Stomper Machine. Colin’s question about what a Stomper Machine is gets answered immediately as Madprof uses the two legged ATAT style machine to destroy the Combat Shed. Luckily Colin’s Banana Bazooka fires some deadly skins that make the Stomper slip and allow Steve a closing joke about being skinned alive.


Dread Tidings sees an odd Dreadwind Fails to Answer Questions Properly! as Dreadwind fails to answer any of the questions from Paul Schagen from Swindon properly and instead does an odd series of spinach jokes (how do all the Decepticons fit in Astrotrain in the film? Eating lotsa spinach apparently). Meanwhile Adam Jones from Bletchley bemoans how dull the Next Week page is now. He’s not wrong.


So, as the image below isn’t hugely exciting, let me promise you that next week Scorponok and Optimus will be dealt a run hand by a mysterious new character. 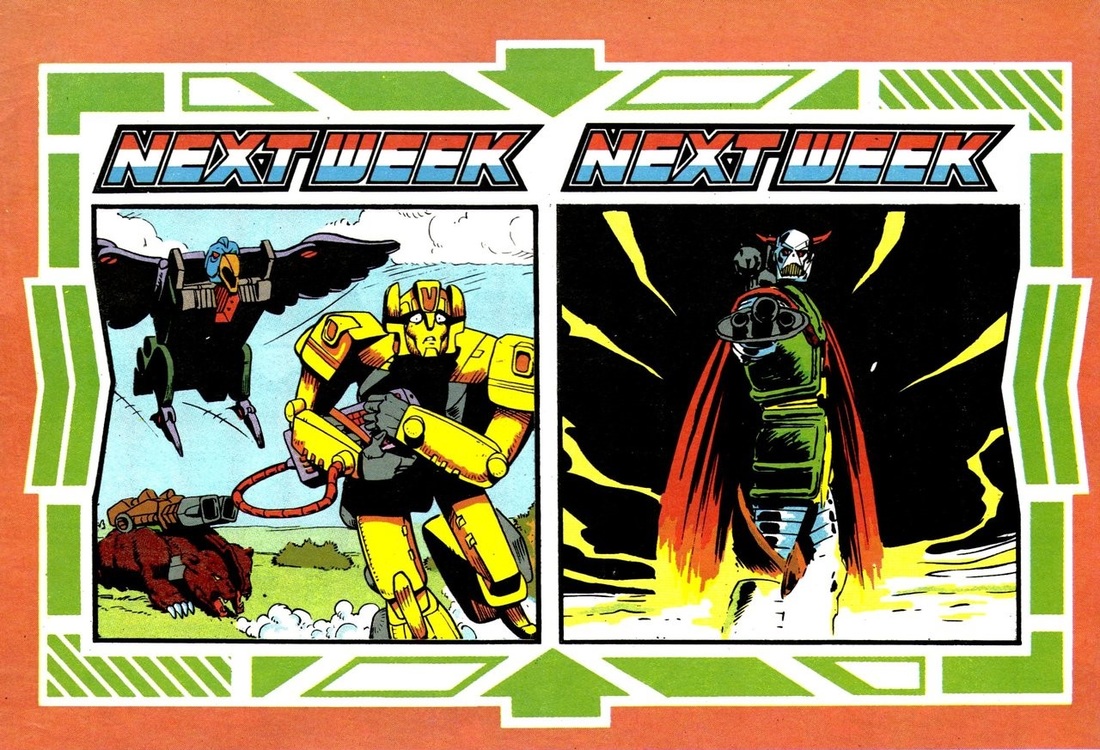