Don't Leave Me This Way. 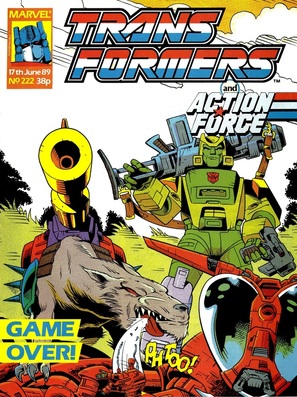 It’s such a clever act of symmetry that the first and the last issues that will be covered in the second book version of this project (coming soon!) both contain the second five pages of Wanted..., it almost looks like I did it on purpose. Coming full circle as a deep meaningful metaphor for Something or Other like I’m Patrick McGoohan in The Prisoner.

It’s just a coincidence of course, but the feckless fools who actually pay for this stuff will be tricked into thinking that when I alter this for The Book 2. It’s also fitting that the reused introduction of Death’s Head ends with him going back in time, just as the comic itself is trying to do.

[Note to self: Be sure to cut that last bit for The Book 2. It’s our little secret. Just make sure you come up with a really good last line for this one though.] 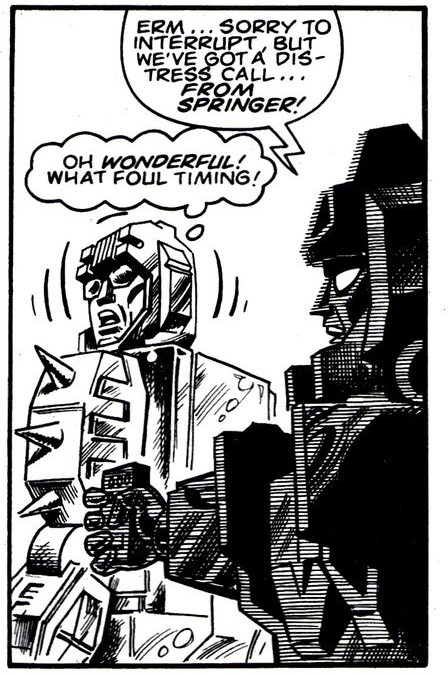 "Boy I hope you get lethally stabbed soon..."
Over in the black and white section, we reach the end of the transitory period as the final story to be written as eleven colour pages per part concludes, and sets the British stories off in their post Time Wars direction. Unlike the attempt with Megatron back in Fall and Rise... this will, albeit in a somewhat haphazard on and off way, actually stick and become part of the core of the remaining UK adventures.

Things open with Snarler reading Catilla and Carnivac the riot act over their collaboration with the Autobots. Considering he started doing this as Springer and company left and is still doing so after they’ve managed to drive to a nuclear power plant, break in and start fighting a bunch of monsters it suggests some serious stamina on his part. This would of course be the worst time to get a call from Springer asking for help, so it’s easy to understand Carnivac’s incredulity when Catilla thinks it’s a good idea to go “Sorry to interrupt but...” as loudly as possibly. Maybe wait till you can have a quite word with the boss next time mate.

In an attempt to appease Snarler, Carnivac tells Springer they’re not going to help. And to be fair, the Autobots could easily be fighting Decepticons. This is where the fact this is “Only” a four parter comes into effect as there’s not enough space to create any tension from Carnivac’s decision as he changes his mind and goes to help the Autobots on the same page. With Catilla going along, not out of loyalty to his friend or camaraderie with the Wreckers but because he thinks it’ll be a bit nuts. Which is an odd thing to base a life changing decision on, but I’m sure it will work out well for him.

Snarler gets the highlights here, being far too sensible to try and stop them himself, he grimly decides that when the execution squad are picked he’ll be at the front of the queue. With his love of regulations, mastery of speeches and general common sense he’s clearly the successor to Ratbat. 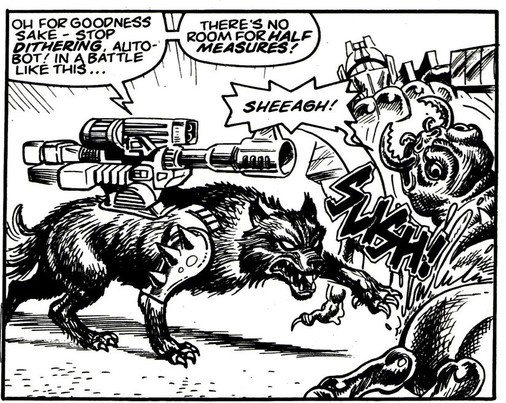 "If I scratch the mask off I can give you your proper face!"
In the power plant the Wreckers are struggling with the issue of whether they should risk killing Skids by killing the monsters. Obviously in this delicate situation where violence could destroy one of his own means Springer really needs the help of two guys who really love killing things. Luckily Carnivac and Catilla break through a wall right on cue.

Meanwhile, Skids is showing this is actually a very carefully plotted story on Furman’s part. Across it’s length he’s added new reveals and twists to exactly what’s really going on with the limbo beasts at exactly the right points to keep the reader surprised and interested when things might seem obvious. This last rug pull should in theory be obvious but it still subverts the direction the plot seemed to be going in: The monsters aren’t dependant on Skids at all and will carry on fine without their “Pop”.

With the fight over the Decepticons are prepared to leg it from Snarler, but Springer invites them to become honorary Autobots. Like the kids from Armada (apparently Springer carries about a couple of spare Autobrands on him at all times, just in case. Unless he picked them from the corpses of the Jumpstarters?), and like the kids from Armada Catilla is eager to join up. Almost oddly so, it seems he’ll do anything for a lark.

Carnivac though will join the team but only on his terms. Because he’s no Alexis. To put the final piece in place for future stories, Springer decides to rebrand and call everyone The Survivors (tm). So a group of rogue Transformers abandoned by both sides and hunted by at least one of them, with uneasy alliances within their own ad hoc ranks. There’s a lot of potential here and it is going to be milked.

Despite a couple of pacing issues where things happen a bit too neatly and/or quickly, this has been the best story in a considerable amount of time. Everything is nicely balanced and Furman keeps things moving with his Russian Doll style plot reveals about the monsters. After a worryingly lengthy period where the book seemed to have lost all direction, this shows that there’s still life in the old Pretender dog shell yet.

Oddly despite being drawn as one issue, John Stokes is much weaker on art this week It feels as if he perhaps had to rush things towards the end, in particular there’s some very odd soulless eyes and arms are often a bit odd. Inferno needs to go on a diet on the strangely staged last panel (complete with Springer giving what looks like a Nazi salute) as well.

Never change Raptor.
Weirdly Transformation is almost entirely given over to talking about the reprint once again rather than trying to get readers to keep in mind there’s original content as well. The sidebar tries to get kids to go buy issue 8 of Death’s Head, with TV’s seventh Doctor Who as a guest star.

The bottom of the sidebar is given to promoting Aspects of Evil, and it’s clear from its euphoric mentions over the last few weeks the comic is very much putting all its survival eggs in the basket of that story in the hope it will turn the tide of reader opinions of the new format. We shall see how well that does.

AtoZ covers Perceptor and Pipes, apparently the latter doesn’t like blemishes on his body. James Roberts you bastard.

On the letters page Dreadwind assures Andrew Smith (the creator of Adric?!) that Transformers will reach issue 1000 and he will definitely still be in charge of the letters when it gets there. One or more of these things will turn out not to be true.

We also get an odd example of Dreadwind Fails to Answer Questions Properly!, as long time reader Richard Albon from Pulborough points out that in issue 206 Dreadwind gave a different name for the Autobot killed at the start of City of Fear! (Steamer)to the one Grimlock Christened him with back in 175 (Chuffer). Dreadwind, unsurprisingly doesn’t care about this or a couple of other corrections. He oddly also claims to have explained about the Classic Pretenders once already, but I’m sure this is the first time he`s mentioned them.

Action Force involves some dull typical Hama stuff where Billy remembers he’s a ninja like all the cool people are and finds a blind man to be his ninja master. Though I’ve read the original comics before I can’t remember if Mr Blind will turn out to be involved in the OTT Snake Eyes soap opera, but I bet he will be.

The real joy though is in Raptor. Who—and I shit you not—shows Cobra Commander and Fred VII he can find exactly where Action Force are by showing his birds (who are wearing hoods and can’t see anything anyway) an Action Force toy truck so they know what to hunt for. And it works. Gloriously insane and we’re not even shown what Fred’s mysterious yet bouncy looking vehicle can do yet. 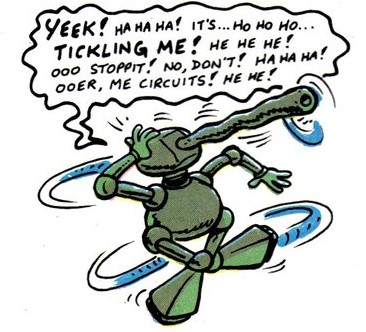 If Lockdown had said "Ooer" AoE would be a better film.
Sadly, the editorial team miss changing one use of the series’ original name in the sentence “My birds can find the Joes for you! See this model of an A.F. vehicle?”, which must have made many readers wonder who all these people called Joe that Raptor wants to find are.

In Combat Colin, a time warp deposits Lockdown from Transformers: Age of Extinction in Wallytown, though he’s calling himself Tank Top for some reason. Colin defeats him by sticking a mouse down his barrel, which proceeds to tickle him to death. If only Marky Mark had done that.

Also, whilst replying to one of my tweets about this very issue as if we were equals, Lew Stringer has mentioned on twitter we’ll be getting collections of Combat Colin (probably in chunky comic form) for his 30th birthday next year. Hooray!

*Gets in his little yellow sports car, driving off as the door of his flat ominously closes behind the dwarf butler...*

[Next week will also be on Thursday because I'm at TFNation! Come say hi if you're there] 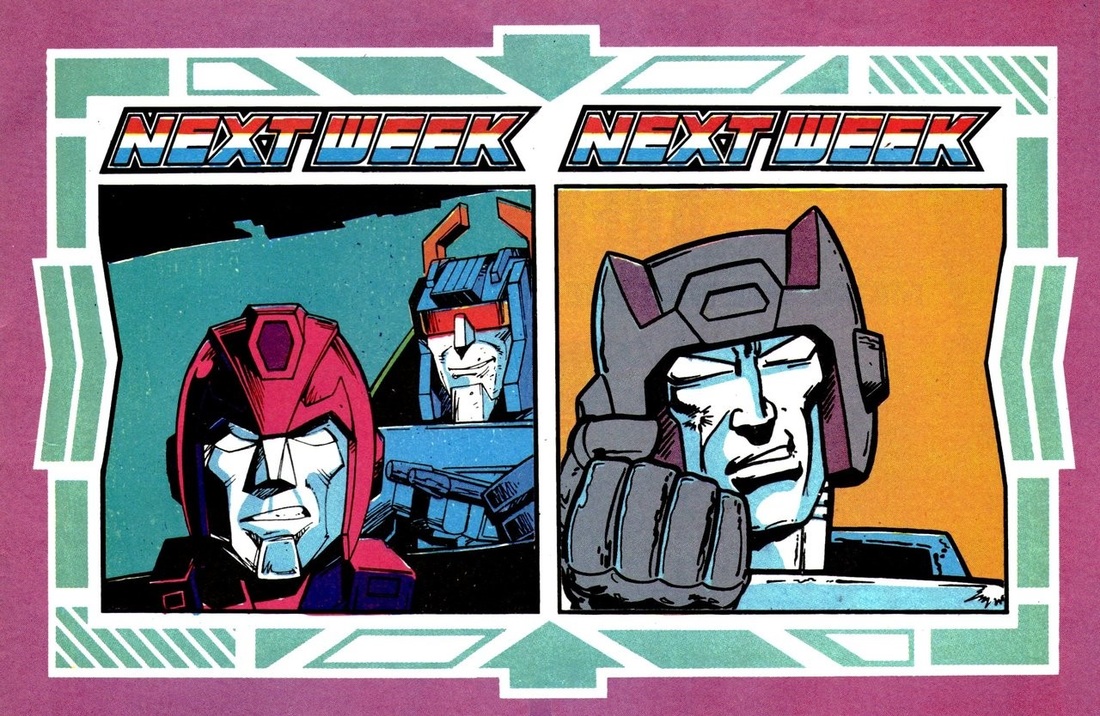