Ooops, I Did it Again. 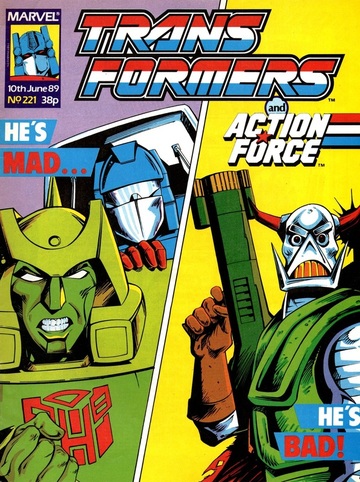 
Think back...Remember the dreams that spawned us!


First we have to open with a massive oversight from last week, I must admit to having completely forgotten that Dan Reed only drew the first half of Survivors!, meaning I failed to give him a proper farewell. His art wasn’t to everyone’s taste and did at times suffer when rushed, but he was the master of the nightmare imagery and the book would certainly have been duller without him.

Here on our first post-Reed issue, we’re nearing the end of the transition period between the old and the new format. This week the brief experiment with “Split” covers comes to and end, with a Jeff Anderson effort half given over to Springer and Skids (“He’s mad...”) and half to a Death’s Head pose copied from one we’ll be seeing—again—next week from when he’s confronting Cyclonus and Scourge (“He’s bad!”). From here until they end every cover will be based on the black and white story, and this is the only time a reprint will get a look in on the cover.

This is presumably because of the perceived popularity of Death’s Head, a possibly misplaced perception considering his book is in it’s death throws (issue 8 of ten was out this week). And any lapsed Transformers fans who might be interested in a new appearance by Death’s Head—which is what the cover seems to promise—will be the ones most likely to have already read what lies within.

In fairness, Transformation is surprisingly upfront about this being a reprint, considering some of the comic’s recent form I was half expecting it not to be mentioned at all. The claim though is that this is entirely down to reader demand for the return of Death’s Head. Which even if you don’t know the ongoing behind the scenes crises would sound dubious as those people would have meant a new story (and again would have been the folk most likely to have already owned this), considering Transformers already has a dedicated seasonal reprint book I don’t think any long term buyers were keen for this. 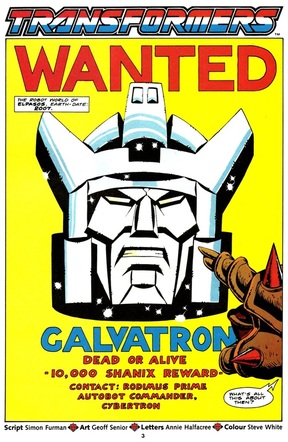 The slightly different logo makes running this again worthwhile, right?
On the other hand, I was a fairly new reader so all this was exciting to me. The new opening half now ends with Death’s Head leaving the bar and this would actually have been my first exposure to the wonders of Geoff Senior and it blew my tiny mind. Indeed even now, thanks to his lengthy absence from the title, it still has quite an impact. We’ve had good and great artists working on the book since he left but he really is in another league. The issue ending here also emphasises how little interest Furman had in writing actual Transformers at that point, it’s basically a short story about an unhappy barkeep.

But the sad fact is, the book is loosing readers faster than it’s gaining new ones. Doing something that will further alienate those long term buyers (even though the irony is kids now too old to be buying the toys are the ones Hasbro don’t want reading) without anything to bring in noobs at a faster rate—and Death’s Head even in an original story wouldn’t have been popular enough to do that—is not a good idea.

It also has to be said that the choice of story—though presumably down to it simply being the next in line for the Collected Comics treatment—is not a good one as this is a very long arc that will be made even longer with each issue broken in half. Either half the book gets given over to reprints for months or the new readers who haven’t read it before get screwed over. Guess which we’ll be seeing.

Still, it’s given me something to say about the reprint this week, I’ve no idea how I’ll be dealing with this in the weeks to come. Maybe I’ll just copy and paste half of what I wrote the first time around? 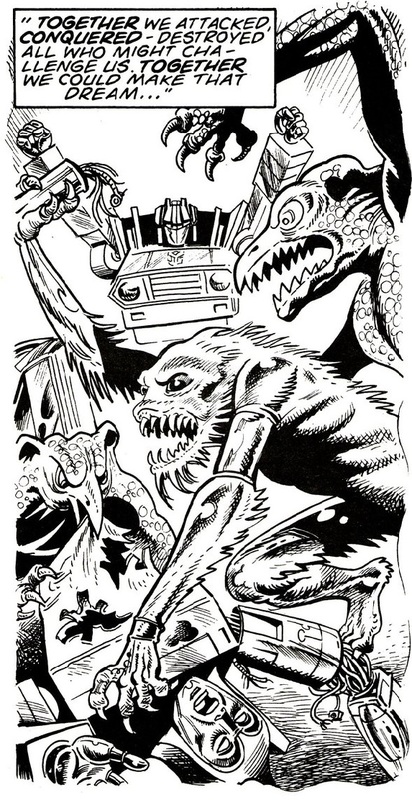 Not unlike working in a supermarket.
Survivors! Part 3 has two interesting moments, one that adds to the more adult themes the story has explored and one which rather oddly backtracks on them.

The first is a revelation about Skids, told to us by one of his gloating children. His nightmare wasn’t being tortured by monsters, it was ruling them and leading them on a rampage of chaos and murder. This is a very clever twist that adds all sorts of layers to Skids character and is perfectly in keeping with the theme of abandonment that has run through the story, the monsters like the Wreckers and Mayhems feels unfairly ignored by those responsible for them.

The second is an odd moment where Broadside repeats his own anger at his treatment by his superiors, only for a “See Issue” box to describe these feelings as a “Somewhat paranoid” assumption. I wonder if that was actually in Furman’s script or if it was an editorial addition after worries that all this cast the Autobots in too bad a light? “It’s OK kids, Broadside is just being grumpy!” It doesn’t help that this comes alongside Inferno having to point out that shooting ray guns in a nuclear power-plant is a really bad idea. No shit Sherlock.

Still, the various fights between monster and machine are well done, everyone’s sense of worthlessness is well conveyed as there’s a nice cliffhanger break as Springer has to call for help from the Decepticons.

On art, John Stokes returns to interiors for the first time in years, and though his monsters are more conventional than Reed’s, his art is probably the first to work in black and white, getting the balance between having enough detail so as not to feel as if it’s missing anything but isn’t over clogged. He, as does Anderson’s cover, also uses Reed’s odd character model for Skids so either everyone was sent the toy instructions or they’re copying the French American. Considering they even include the really odd head backpack it’s presumably the later. 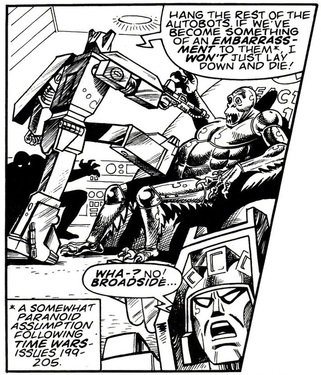 Look at the sad eyes of the sweet mutant nightmare man evil Broadside is about to kill.
As well as going “YOU ALL WANTED REPRINTS”, Transformation also gives its sidebar over to further promoting Aspects of Evil and apologising for the credits FUBAR back in issue 214.

The first letter in reaction to the format change, from Matthew Adam Roberts from Penrhynside, is unsurprisingly full of praise for it and does show that—even if they were in a minority—not everyone hated it. Perhaps more surprisingly is the fact the comic will be printing many more negative letters in the weeks to come.

This week’s Dreadwind Fails to Answer Questions Properly! sees Dreadwind fail to answer Charles Horwell from Devon’s question about why the Autobots didn’t get Metroplex or Omega Supreme to step on Galvatron. The correct answer to which is “Metroplex hasn’t been built yet and we’re pretending Time Wars happened after Underbase so Omega Supreme is dead”. The answer given is “Maybe they didn’t want to step on something nasty!”.

Action Force is split into two halves, one introducing new characters such as Tunnel Rat and Outback which also seeds in the idea that even though AF is now a nomadic unit they still have to be paid and the US Army are now handling their paychecks via computerised credit card. The second sees Raptor prove his accountant credentials by tracking these payments to check where a Forcies unit is now so they can do attack them with his birds. Cobra Commander is not convinced. 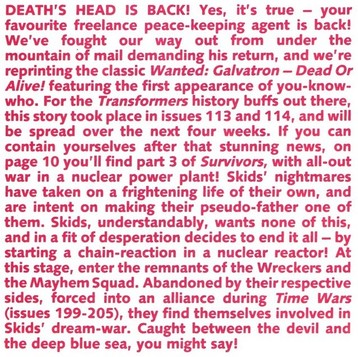 YOU KNOW YOU WANTED IT.
AtoZ covers Onslaught and our Outback (who, unlike in the American printing, gets a first appearance credit thanks to the UK) and Combat Colin and Semi-Automatic Steve are on a deep cover jungle infiltration mission...until his mom tells them to stop messing about and mow the lawn.

Next week’s entry will probably be up on Thursday as I’ve got a birthday party on the Friday. Who will survive? 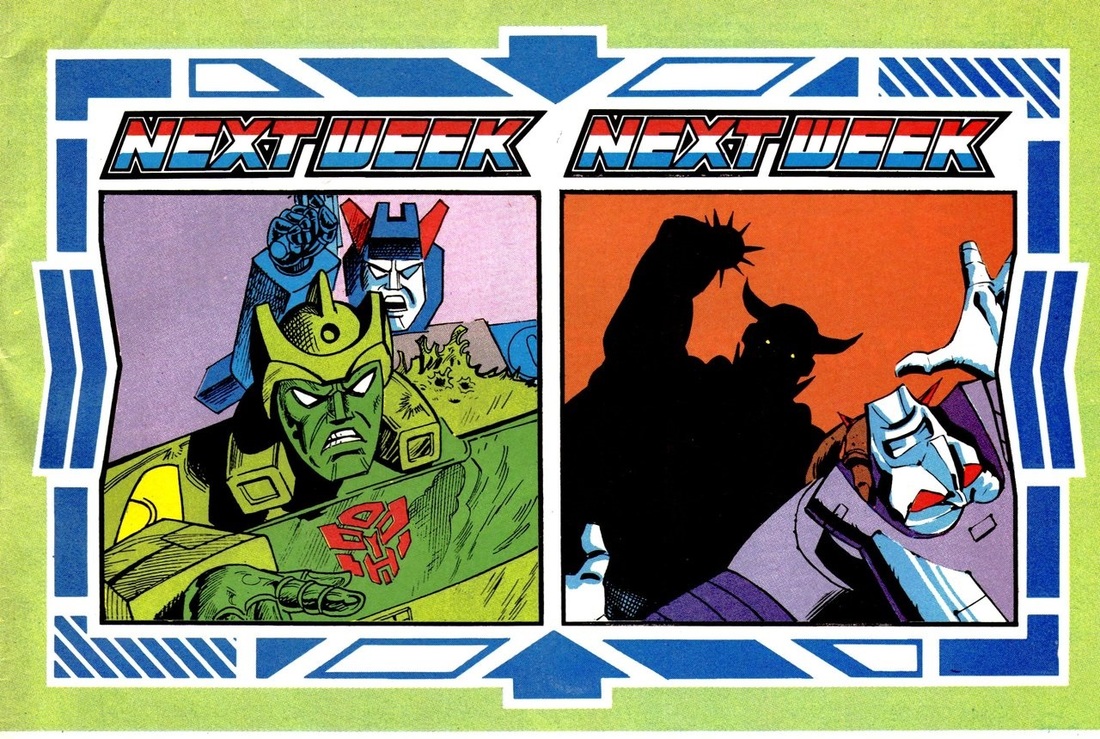