Have You Ever Had a Dream Come True? 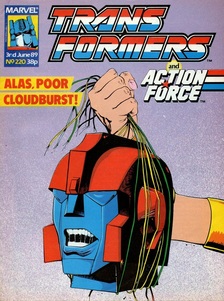 You dreamt these?! Man, you have got to see a shrink!

Jeff Anderson gives us another notable cover is this era of endings and beginnings, we’ve had the last that attempted to merge a British and American story and here we have the last to represent just a US strip until we reach the point where there are only US strips.

It also notably does what the American cover for this story—by future comic superstar Jim Lee—wasn’t allowed to do and lets us see a decapitated Cloudburst (his hanging off body on the US version being a last second addition). So yay for the British and their non squeamish attitude to loose heads. It’s what made our country great. 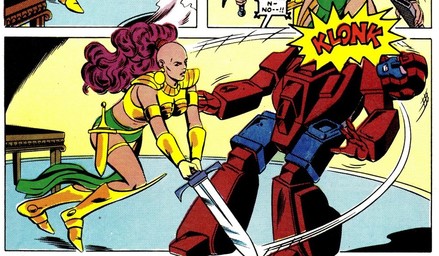 There was no way I wasn't going to include this even if it was impossible to trim neatly.
Speaking of squeamish, the fourth part of Recipe For Disaster! looks initially as if it’s going to play into “Woman scorned” clichés, something Transformation plays upon. The First One is incredibly pissed at Cloudburst’s (in her eyes, though he never actually said he was human) deception and humiliation of her and her advances and so she chops off his head. With one swoop of her sword. And a “KLONK” sound effect. It should be awful, but it’s actually quite funny and clearly intentionally so as Landmine lampshades it at the end by claiming being able to do that with one swing was what was really impressive about her.

Speaking of Landmine, either Autobots aren’t as asexual as Cloudburst claimed or he’s really throwing himself into the cover provide by his shell as he’s clearly enjoying the attention of three women and impressing them with his tales of fighting Sharkticons (a film reference! From Uncle Bob!), but he doesn’t get the head he might have been expecting as The First One comes in and interrupts his bragging and waving Cloudburst’s noggin about. Which brings us to what may be the most unexpected moment of the entire story: Character development for a first wave Autobot Pretender!

Landmine’s first reaction is to unsheathe his own weapon (the innuendo continues), but then decides to be like his friend and do something reasonable. Because that’s worked so well for Cloudburst. He lowers his weapon and talks calmly, which makes the First One realise her mistake and lets the two Autobots go with good wishes, the crystals and all body parts attached.

This would actually be a rather fun place to end the Planet of the Women story, but it has to wrap up the Mechannibal plot as well, in a rather hurried manner. So Dreadwind and Darkwing try to jump them...but are in turn jumped by Sky Lynx. Then they convince Master Mouth to release them and Berko (and also to put the microchips they came for into use to rebuild all the eaten robots. Which is presumably to make the cannibalism less horrific, though it’s hard to see them taking brutally murdered body parts back with them so it’s the only real way of wrapping that plot up in a way that doesn’t make the entire journey redundant) by holding the robot hunters hostage. 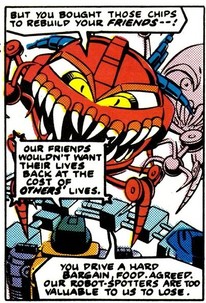 I love Master Mouth.
But oddly they immediately tell the Mechannibals the Robot Hunters are themselves robots, which should invalidate the whole deal but instead everything is done as agreed and the Autobots go home (though Berko and Sky Lynx go on to parts unknown never to be seen again. Though one of the best bits of ReGeneration One had it that Berko took over the Cosmic Carnival) whilst the Decepticons are chased by some very hungry red circles. Which, unexpectedly, will be followed up on by Furman not once but twice. Which shows he was a fan of them as well.

After a shaky start the Femax plot would up much more fun than I remembered and even managed to come as close to making Cloudburst and Landmine characters as was ever going to happen. Or maybe I’m numbed to them after eight straight issues of the two? It’s just not very well connected to the Mechannibals and their plot would have been better finished in the one story, with this a less rushed standalone follow up (perhaps by giving the women a source of microchips of their own?), but overall this shows Bob had more life left in him than I perhaps expected. And with the decapitation Delbo actually has a reason to do the Delbo Pose for once. 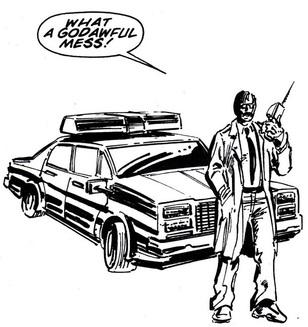 "Bruce Wayne?"
In the black and white half of the book, part two of Survivors! opens with some surprisingly serious musing on the treatment of soldiers by governments after the fighting is over. Springer and Carnivac are united in their disgust at having been abandoned by their superiors for political reasons, with neither side wanting to remember the wretched event (a comment from Furman on how he’s going to be ignoring it and its development for Megatron on the US series he was writing by this point?). It’s hard not to feel the influence of the many post-Vietnam films and TV shows here, though luckily no one is close to being Rambo.

The group splits after the Autobots pick up news of the attack on the nuclear plant. The Decepticons stay behind and Snarler makes it clear to Carnivac that if he doesn’t want a court martial (again, a real life bit of military business working its way in) for working with Springer during Time Wars he must kill him upon his return. Which creates the angst you’d expect and plays nicely into the themes of soldiers misused by politicians nicely.

At the plant, a cop who seems to be G.B. Blackrock’s brother (or possibly Gary Oldman as Commissioner Gordon) is giving a handy exposition report that makes it clear giant robots are the problem to the arriving Wreckers. They go in and assume it’s energy stealing Decepticons... only to find a mad Skids. 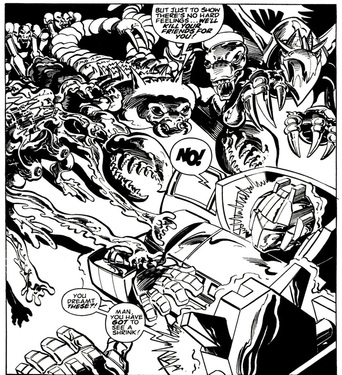 "Have you ever thought about Jesus?"
As his experience in Limbo is gone into in more depth it really starts to sink in how horrific it was: Two straight years of nightmares of monsters that have now followed him into the real world. It’s no wonder he’s at the point where he’s prepared to commit suicide to stop them. Nor is it surprising he thinks blowing up a nuclear reactor is a good sensible way of doing it. There’s some amusement to be had from the fact the Wreckers aren’t especially tactful as Broadside points out his plan is silly (and later cracks a joke about Skids’ dreams).

There’s little time for therapy though as the monsters break in and we get the money shot that was clearly why Dan Reed got this gig as they’re exactly as slimy and disgusting as you’d expect from him. Though perhaps the really interesting thing is they act very friendly towards their “Pop” and are only going to kill his friends...

This nicely balances some pretty dark character moments with just the right amount of humour and action to be just about the densest of the five page stories to date. Though it would still benefit from colour, Reed’s art gets to do what it does best as well, and it’s a nice touch (pointed out in the comments last week) that Inferno still has his leg damage from Time Wars as well. 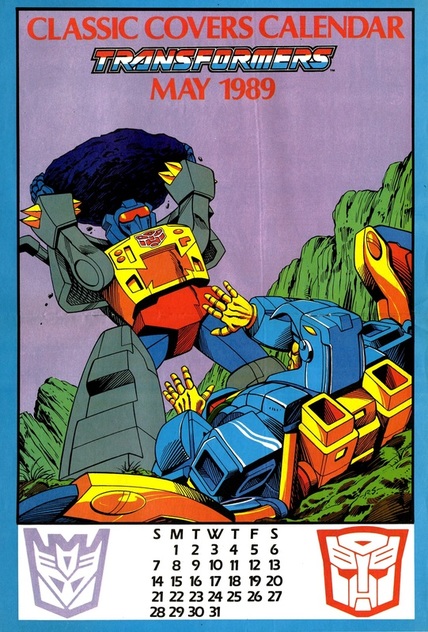 It May be late...
Transformation of course has another difficult and potentially buyer shredding transition to prep the reader for. With the American material now bang up to date (at least in terms of what has crossed the Atlantic), there’s little choice but to present a reprint as the colour strip next week, the already vaguely promised rerun of issue 113. So naturally Transformation carefully explains the reasons for doing this and reassures people that there’s a lot of more recent readers on the comic who missed it the first time around and for whom it will be a new experience and...

Oh no, it doesn’t mention it once. We get a story so far recap (again mostly focusing on the American story, though Survivors! does get in the main text this time) and a sidebar devoted to Action Force and apologising for the June calendar being published in May. The only hint of what’s to come is the NEXT box at the end of Recipe and a panel on the Next Week page, which of course no longer has context providing text. This will end well.

To make up for its loss we get the May calendar exactly at the point no one would want it except for completism. Though it’s at least a nice reuse of Robin Smith’s Grimlock about to stone Divebomb #136 cover. A full page devoted to an AtoZ for Omega Supreme is less a waste of space, though oddly it doesn’t mention robot vultures under “Weaknesses”.

For some reason the replies from Dreadwind on the letter’s page are slightly off in colour this week, making them hard to make out against the purple background in a way they haven’t otherwise been since the new look was introduced. We actually get a fairly sensible response to The Movie Watcher from Cardiff’s mentioning of a Transformers comic featuring in the classic film Vice Versa, merely agreeing it shows some Americans do have taste and suggesting there should be another Transformers film with himself in the lead.

But of course, merely saying you’ve seen a film is not a question, and Neil McClean (who actually sounds like an ‘80’s action hero) from Brixham gives us a dozy of a Dreadwind Fails to Answer Questions Properly!

McClean (presumably whilst chewing on a cigar) actually goes back to a letter from Steve Tanner in issue 97 asking why Galvatron didn’t remember the events of Target: 2006 from when he was Megatron and Grimlock’s reply about alternate time-lines. Which leads to the not unreasonable question of how Galvatron can remember what happened to Megatron during Time Wars.

Naturally when faced with a long, thoughtful letter from a long term fan, Dreadwind fails to answer it properly. First he chides the letter for being long, then tries to say Galvatron had travelled into an alternate time-line and didn’t remember anything Megatron saw or else he wouldn’t have gotten shot in the face. This ignores the fact Galvatron only gets shot in the face because he’s trying to prevent Megatron having the same happen as he remembered. To close things off, Dreadwind then asks kids to stop writing in about Time Wars, presumably because he’s not very good at answering those questions.

Action Force resumes with Billy having been given an artificial leg by Fred VII that allows him to do ninja stuff, even if he can’t remember learning it. The real highlight thought is the introduction of Cobra’s accountant...Raptor. A half naked man in a bird cowl who thinks he can control flying hunters. This results in Larry Hama—who was well into his own Bob Budiansky style burn out here, the later issues of G.I. Joe are basically what Transformers would be like if Bob had done another 100 issues—venting his full fury through Cobra Commander. “This birdman is crazier than Dr. Mindbender! I’m sick and tired of wackos in funny suits! What do you sleep in? A nest?”

It’s hilarious and gives Divergent Paths a strong opening, though you wind up hoping Larry increased his meds afterwards.

Combat Colin sees the return of Professor Madprof, who has created a time machine to switch Spring and Winter. But Colin is more annoyed about it causing the switch in the Classic Covers Calendar from May to June. You can always count on Lew Stringer to explain things.


Next week, the comic gives the kids something to write in about other than Time Wars. 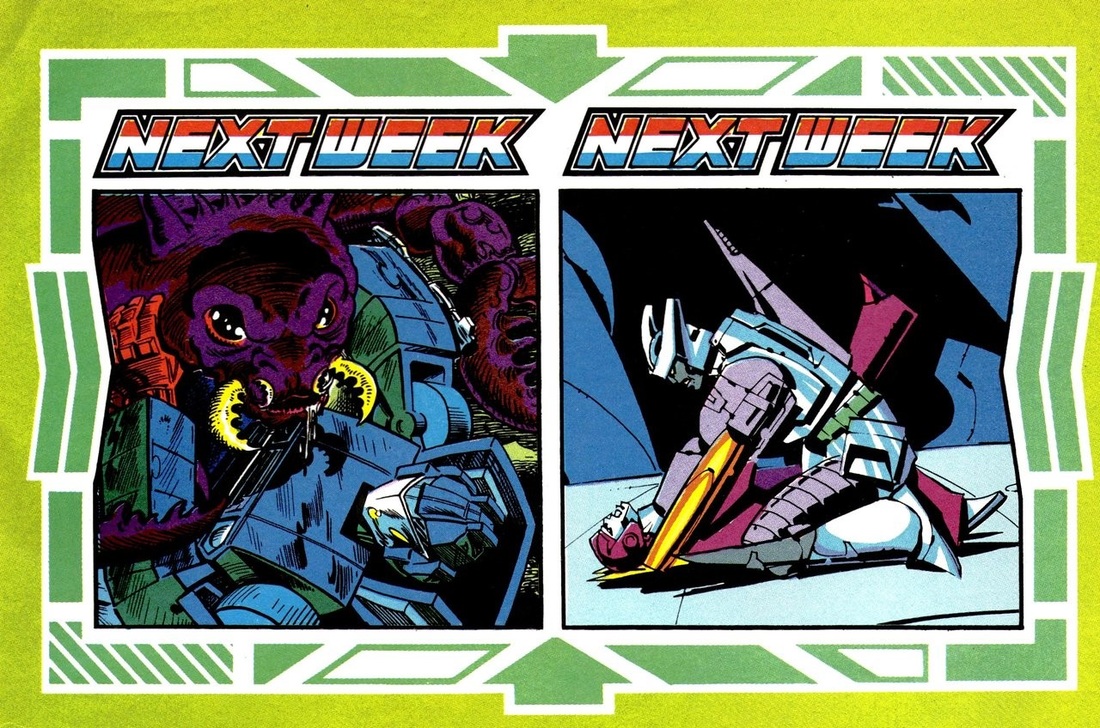