You’re Got Stuck in a Moment and Now You Can’t Get Out of It. 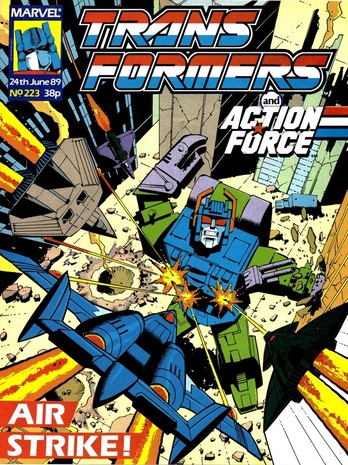 
After more than two months of transition the book finally completely its metamorphosis into it’s new shape. Aspects of Evil! is the first story written and drawn for black and white format, a chance to show the title still has legs and can carry itself into the future with some form of dignity intact.

If you wanted kids in the newsagent’s to sit up and take notice of a book they might have drifted away from, a Geoff Senior cover is as good a way as any. Bustling with energy and violence its image of Scorponok smashing up a city whilst under attack from (as yet unknown) jets it’s stunning. It’s also worth noting that pretty much the first thing Furman did when promoted to the American series was to try and get Geoff Senior brought over as well, a few covers (and eventually a return to interior art) on the UK book might have been intended to create some more recent work to show off to the American editor.

Before we get to the bold new start though, it’s old business in the shape of Wanted: Galvatron—Dead or Alive! Part “3”. This would have been my first exposure to Will Simpson’s jagged sharp art, though it’s the sequence of Rodimus executing a captured Decepticon prisoner that really stood out for me at the time. It’s odd—having covered this story once for this project already—how my memories of how it felt to read it at the time are coming back much stronger when revisiting it in the original format I encountered it in. 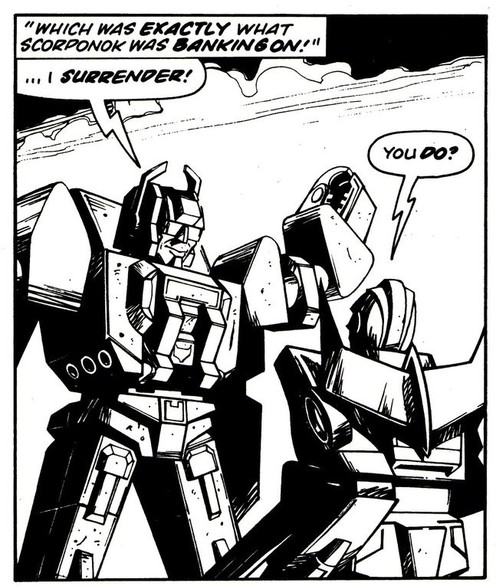 "Also, smell my armpit"
Speaking of long absent artists, Aspects of Evil! sees the return of Jeff Anderson for the first time since Firebug! last October (when you Google Jeff Anderson—as I did to check that—be sure to put Transformers after his name as the top hits will give you a shock otherwise. It seems the most famous Jeff Anderson in the UK is not a nice man). Between this and the Senior cover it feels like the book is falling back into old patterns as it struggles with change.

This is also indicated by the style of story Aspects... is. I’ve talked before about how Furman particularly enjoys writing a type of story I call the Anthology Epic, a series of four or five standalone yet connected issues that build to a big climax. It goes all the way back to Dinobot Hunt!, and it’s likely he came up with this story at the same time he started thinking about doing one for the American book. Here the linking theme is “Evil”, or rather five stories with a focus on popular Decepticons who surround themselves with new toys that need promotion. All narrated (allowing the for stories to fit within five pages as a lot of detail can be skipped through) by an initially mysterious voice.

Well, I say mysterious, it’s clearly an Autobot who is in the story and the options for this opening issue are Hot Rod, Scoop and Quickmix. How can you possibly guess which one will turn out to be the narrator at the end?

It has to be said, for a story about EVIL, this opening story is slightly underwhelming. My good friend at TFArchive Cliffjumper calls this story Aspects of Ohhhh, Aren’t I a Bit Naughty?, and that’s certainly hard to disagree with here. Aspects of Hot Rod Being a Bit Dim would be equally as accurate a name for it.

So, in 1991 Scorponok is going on a mad rampage through a town (and to be fair, as he smashes buildings down he obviously kills a lot of people, so slightly more than naughty) in the aftermath of the Decepticon Civil War. Megatron’s troops, the Micromaster Air Strike Patrol, attack him and Hot Rod, Scoop and Quickmix arrive to take him into custody. 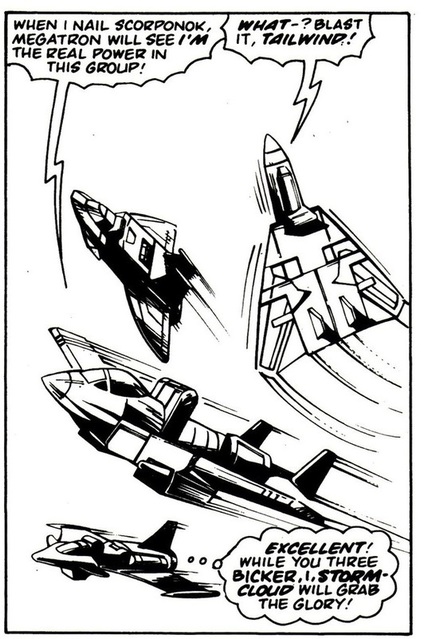 "Call me Starscream!"
Which is exactly what Scorponok wants, and we get a lovely comedy moment of him cheerfully surrendering. It turns out that as a POW he’s entitled to Autobot protection, meaning they have to take on the Air Strike Patrol and battle them out of the town so as to protect the humans. Leaving a smug Scorponok to wander off on his tod, free from annoyances.

The flaw here is the priority for Autobots should always be the protection of innocents anyway, so there wasn’t really any need for Scorponok to do more than walk into a human settlement and let the Air Strike Patrol attack. As long as he’s not being a threat himself, Hot Rod and company would have had to focus on the main danger. The surrender and playing of the Autobot code seems rather unnecessary. It’s also rather like the “Stay here and capture me or go rescue Springer” ending to Wrecking Havoc.

So what do we get from the 1991 sequence? The main interesting thing is the near future setting itself. Furman has his feet comfortably under the table of the American book at this point and clearly had started to make long term plans regardless of the title’s likely doom. So when we get to 1991 there will indeed be a Decepticon Civil War, and he’s being somewhat bold in seeding that in the equally future uncertain UK comic so far in advance.

Though impressive, it won’t quite work. The ultimate Civil War won’t properly line up with what we see here, notably it won’t involve Megatron and it will last about five minutes with little chance for this side-step. The ambition is easy to appreciate though, especially as it shows the first signs post format shift that the title has goals beyond surviving from week to week.

It doesn’t just look to the future though, it also finds the time to glance sideways. Furman’s first American story involves the Megatron controlled Air Strike Patrol and Scorponok in a plot around a staged fight to trick the Autobots. Some of the Decepticon dialogue is even taken directly from Furman’s first US issue as Stormcloud muses on grabbing glory as the others bicker. You get the feeling that he hadn’t been expecting to have to provide five pages a week from now on and decided to use some material from stock to get this opening together quickly. He’s always had a tendency to pre-empt ideas from the American stories, but now he’s doing it to himself. 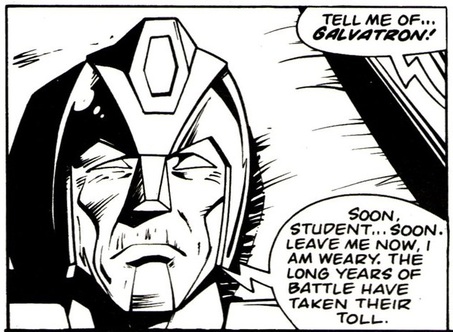 "First I must speak of President Trump..."
It’s also the chance for a toy advert. The Double Targetmasters don’t get to do more than stand behind Hot Rod, but Furman clearly likes the Micromasters and in just a few lines makes them appropriately bastard-ish. Something the full first American appearance will have more room to play with. It’s perhaps surprising that an entirely new subgroup are appearing here with no fanfare (and future issues will show many of the UK artists were unaware they’re supposed to be small), but then if the reprint hadn’t been needed for the colour strip this would have appeared alongside their formal Budiansky introduction and that may have been the intent.

The end of the issue is where the framing device is clarified. In 2356 within Autobot City, an ill Rodimus Prime (no, it wasn’t Scoop after all!) is tied up to a life support machine and is telling this story to a student. Who is keen to know about evil and now wants to hear about Galvatron... We’ll have more chance to talk about this as the story goes on, but for now it’s fair to say “Why does Rodimus look so old after such a short time for his species?!” is going to be a recurring question on the letters page.

This isn’t a bad opener, but it’s perhaps not as exciting as it should have been to launch a new era properly. The moral dilemma is a bit pat and Anderson draws an odd Scorponok, but overall it’s solid rather than spectacular. 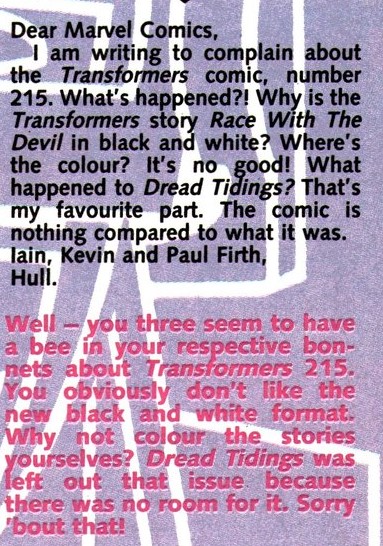 "Here's a crayon"
The Transformation page’s description of the reprint strip is very strange this week. It claims the action switches from Cybertron to Earth, and acts as if this is confusing. The writer seems to be thinking of the full second part which does end up on Earth, but I’m not sure why this would confuse anyone beyond it not being in this issue!

On Dread Tidings we get a fine example of Dreadwind Fails to Answer Questions Properly! as Dreadwind fails to answer a question properly from Jack Chivers from Crawley wondering why Optimus doesn’t change when he has the Matrix like Hot Rod does. The answer is Optimus doesn’t have the Matrix, Rodimus does. Which will actually turn out to be technically true (if you ignore them being separated by 20 years), but ignores the actual question.

Amidst more questions about the Classic Pretenders (who also get a full page advert), we get our first actual negative letter on the new format from three brothers: Iain, Kevin and Paul Firth from Hull. “What’s happened?” is the starting point as the loss of colour (and Dread Tidings for that issue) is berated, includes an “It’s no good!” and ends on “The comic is nothing compared to what it was”.

This is clearly a big thing as these complaints—although perhaps not so boldly—were likely echoed in a lot of letters. It’s actually impressive and to the book’s credit something so negative was published and it clearly gives Dreadwind a chance to reassure the long time readers. Which after all, must be the only reason to print it in the first place. 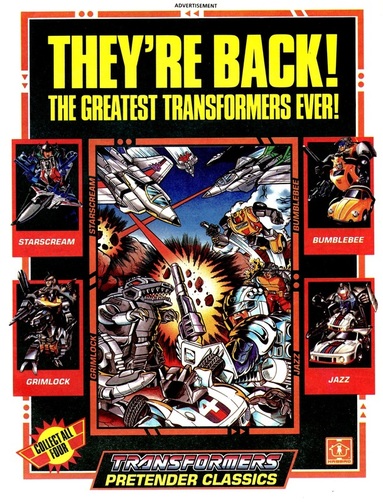 "We're desperate!"
Dreadwind tells them they’ve got a bee in their bonnets and should just colour in the pages themselves. Oh dear.


Action Force sees us get the joy of the POGO! A deadly Cobra attack vehicle that...bounces. On springs. There’s some new action force tech introduced as well but let’s face it, no one cares in the least about that when you’ve got Cobra Commander bouncing all over the place with such force it affects his fillings.


AtoZ covers Powerglide and Predaking, and Combat Colin introduces the Combat Balloon! Which so impresses Semi-Automatic Steve he lets of a celebratory volley of gunfire as they’re flying in it. With predictable, but very funny, results.


Speaking of predictable results, I expect to have some really good hangovers over the next four days at TFNation. I can’t wait to see you all between projectile vomiting moments. 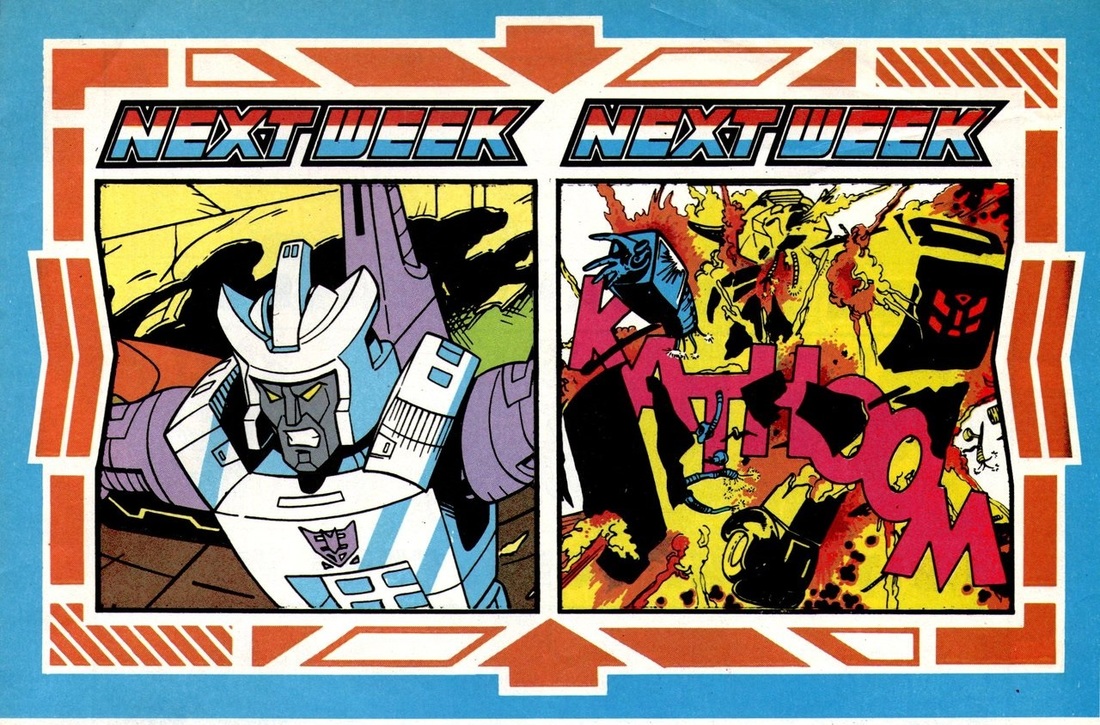